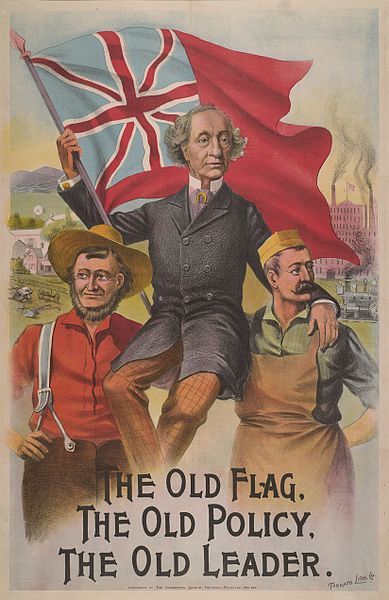 The Case for Canadian Moderate Conservatism

The End of O’Toole

Everything happened in a flash. First, a ragtag ensemble of truckers, in the early days of 2022, arrived in Ottawa, Canada’s capital, calling for an end to vaccine mandates and, in some cases, the removal of Trudeau. Erin O’Toole, then the leader of the Conservatives and hesitant in lending his support to the convoy, finally agreed to a meeting with them on January 28th, a sign that he was succumbing to increased pressure from the party. All seemed to be going well for O’Toole until a leadership review was launched against him on January 31st by MP (Member of Parliament) Bob Benzen, citing O’Toole’s inability to win an election and his flip-flop stance on policies. On February 2nd, O’Toole was removed from leadership by 73 of the 118 Conservative MPs.

Erin O’Toole is no superstar of Canada’s progressive politics, but his moderate policies hold him in high esteem amongst center-leaning Conservative members. From working to keep the carbon tax, his pro-choice stance, to his support of ethnic and sexual minorities, O’Toole’s rather pragmatic stance on issues allowed him to relate to the beliefs of a majority of Canadians. The ensuing fallout of O’Toole’s expulsion from leadership was a sound defeat for the Conservative’s centrist wing. Candice Bergen, the party’s interim leader, removed Eric Duncan and Michelle Rempel Garner, two of the most powerful centrist Conservatives; they were purged from their positions within the Shadow Cabinet, a body of high-ranking members chosen by the Leader of the Official Opposition to mirror that of the actual Cabinet and to hold current Cabinet members accountable.

With the race for the new party leader now in full swing, one couldn’t help but ask: is this the beginning of a new age for the Conservative Party? As Conservatives head to the polls on September 10th, Canadian citizens must push for the continuation and evolution of moderate conservatism, the only avenue forward for the party in an increasingly progressive, tolerant, and diverse Canadian society.

The Conservative Party, also known as the Tories (a reference to our British roots) was formed in 2003 after a merger between the Progressive Conservatives—a moderate center to center-right party—and the Canadian Alliance—its more populist and conservative counterpart. The current party is further split into two main factions: the Red Tories and Blue Tories. Red Tories are adherents of moderate policies which stem from paternalistic conservatism where everyone, but especially the privileged, has an obligation to serve the rest of the society. Blue Tories, on the other hand, are a lot more ideological in their belief in a small government with limited involvement as well as more socially conservative policies. Associated with the ex-Progressive Conservatives, the Red Tories are a dying breed fast disappearing from the echelons of the Conservative Party.

The first Conservative Prime Minister (PM), Stephen Harper, served from 2006 to 2015 as the longest-serving PM from a center-right party since John A. MacDonald, Canada’s first PM. Despite the administration’s controversies around subjects like climate change and indigenous rights, Harper dared not to touch key issues such as abortion and the national single-payer healthcare, fearing that it would turn the Canadian public and ex-members of Progressive Conservatives against him. Faced with an increasingly vocal right-wing and populist faction within the party but realizing the more moderate nature of its general electorate, the party struggled to find its identity within the political spectrum after Justin Trudeau’s ascension to the role of PM in 2015.  Both Erin O’Toole and Andrew Scheer, O’Toole’s predecessor, posed themselves as moderates but remained intentionally lackluster and vague on issues like a carbon tax in order to appease the party’s right-wingers. The current frontrunner of the leadership election, Pierre Poilievre, is unapologetic in his affinity for populism and social conservatism, as evident through his support of the so-called “Freedom Convoy” and disdain towards progressivism—a worrying ideological shift to match the positions of the mainstream Republican Party.

Despite Pierre Poilievre’s popularity amongst the party electorate, his appeal is limited in the wider Canadian society. In the 2021 Canadian elections, the left-leaning parties (Liberal, New Democratic, and the Greens) won 52.77% of all votes, 60.4% if one counts the center-left Bloc Québécois that promotes Québec nationalism too. Maxime Bernier, the leader of the People’s Party, a far-right fringe party that campaigned on anti-globalisation and anti-immigration, only received 4.9% of the popular votes, much less than what many expected. This goes to show the Canadian society’s affinity towards socially liberal policies and economic policies that strengthen the Canadian healthcare system, welfare and safety nets. Further, both Erin O’Toole and Andrew Scheer’s attempts of marketing themselves as moderates allowed the Conservatives to perform well in popular vote share, outperforming Trudeau’s Liberals in both elections. Such reinforces the notion that Canadian voters prefer moderate and pragmatic policies that enhance key Canadian notions like multiculturalism and good governance. Pierre Poilievre’s flip-flop positions on LGBTQ+ rights and abortion—dangerous flirtations of support with the deeply unpopular so-called “Freedom Convoy” and the dismantling of the federal carbon tax, a measure which a majority of Canadians support—are unlikely going to win him the support of the wider Canadian electorate.

The Rise of Moderate Conservatives

If a shift to the right is not going to work, then what direction should the Conservatives take? Should we embrace the Liberal platform completely and become Conservatives-In-Name-Only?

Conservatives should continue to provide a center-right alternative to voters and address many of the country’s issues from a moderate but consistently conservative perspective. Carbon tax, for example, should be incorporated into the party’s platform in the next election rather than only mentioned infrequently with erratic calls to abolish it. Climate change is anthropogenic in nature and is threatening our very existence and the continuation of our way of life. The carbon tax has been regarded over and over again as the most effective and economically sensible way to reduce carbon emissions. Yet instead of continuing Trudeau’s model of a carbon tax where the tax revenue is aggregated federally, a moderate Conservative government should distribute the money to provinces and allow provincial governments to decide for themselves how to best utilize the fund, whether it is to promote new renewable energy developments or encouraging the phasing out of fossil fuels. This will eliminate the inefficiencies in overseeing the money by a giant federal government.

The Conservative government should introduce a concrete plan to reduce its carbon footprint and eventually phase-out fossil fuels entirely. Canada’s energy sector is vital to our economic success and energy independence, and a radical phase-out proposed by the left is not only not business-sensical but will also hurt the lives of thousands who depend on it, many of whom will be jobless under a radical transition plan.

Tax cuts, which the left abhorrently hate, and sector-specific subsidies would be incorporated into the platform of a moderate Conservative government. This will help bolster business recovery post-pandemic while accelerating the development of Canada’s renewable and green resource sectors, ensuring Canada’s place as an energy superpower well into the future. The Trudeau government’s reckless spending is not only driving up inflation but also pushing Canada further into the budget deficit. A moderate Conservative government will eliminate redundant and useless government spending and balance the Canadian budget—a Trudeau campaign promise that he subsequently abandoned. A moderate Conservative government will also bolster our defense spending after Trudeau’s continuous neglect to rise up against the challenges posed by Russia and China, especially in our Arctic. Our defence policy will involve working closely with the U.S., U.K., the E.U. and our NATO allies to coordinate a more aggressive approach towards containing the authoritarianism currently making ground on the global stage.

Further, Canada needs to explore avenues of realizing the idea of CANZUK, a vision that Canada, the United Kingdom, Australia and New Zealand, the four most similar countries in the world, will one day form a union of freedom of travel, economic integration, and defense coordination and cooperation. With the continued advancements in technologies around traveling, the physical distance between the four countries that poses the main barrier towards CANZUK will be outweighed by its many advantages and the notion that “we are always stronger together.”

A moderate Conservative government should also work closely with other parties within the Parliament to reduce toxic partisanship and for cross-partisan solutions to Canada’s problems. This, however, does not mean that we should embrace identity politics and the cultural war initiated by the left that only seeks to divide our country further. A center-right moderate Canadian government will be the best steward to ensure Canada’s continued prosperity well into the future.

Pierre Poilievre and his radical right-wing ideas have no place in modern Canadian society. Jean Charest, the former Liberal premier of Québec, and his decision to enter the race is an encouraging sign to shift the party back towards the center. In order to ensure that the Conservatives continue to play an important role in Canadian politics and remain relevant to the needs of ordinary Canadians, the Conservative electorate must understand that moderate conservatism is the only path forward.