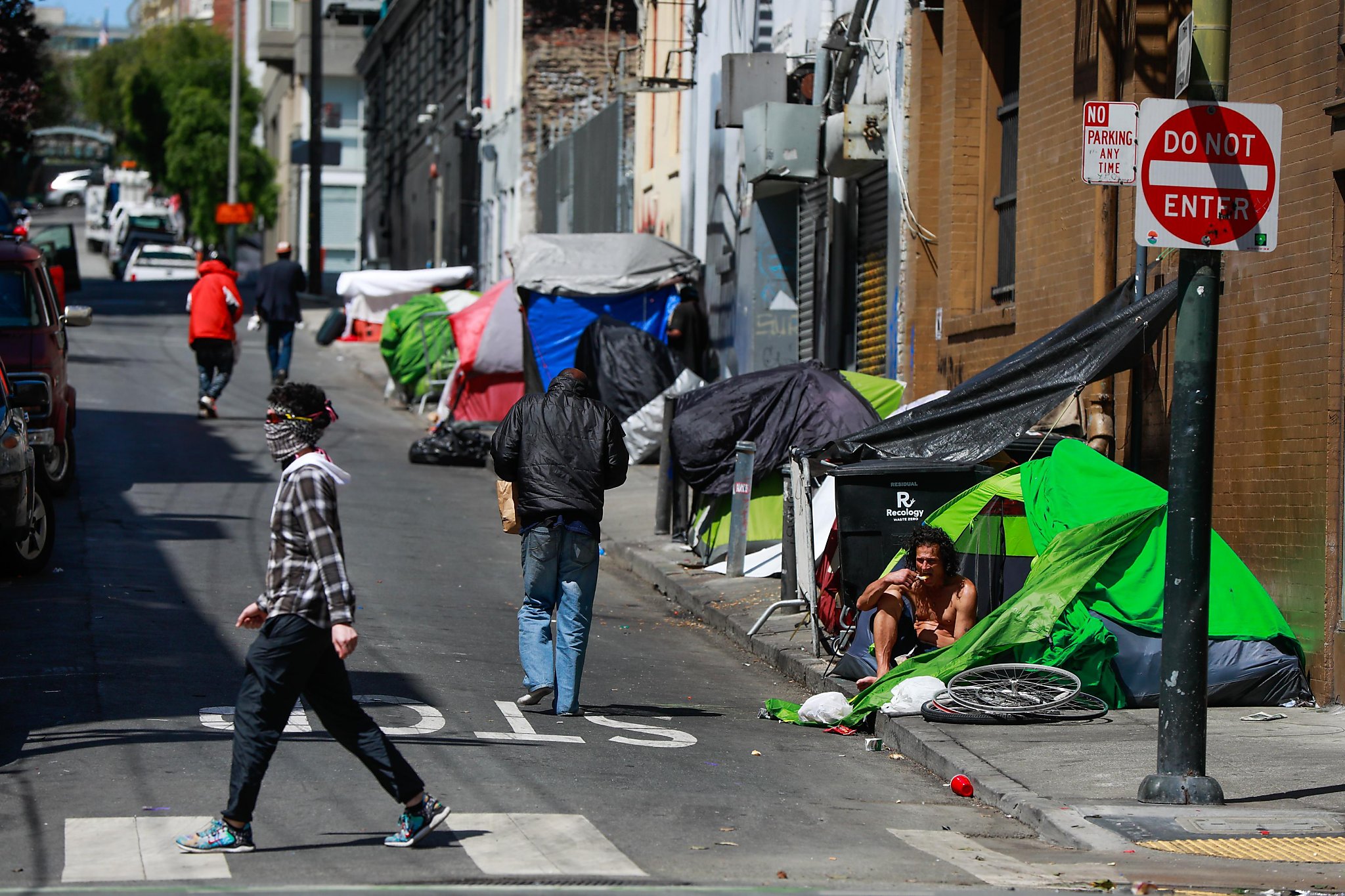 One night in late November, as Thanksgiving and the start of the holiday season were right around the corner, I logged onto Twitter to catch up on news and the day’s events, a relatively normal routine I do multiple times a day. But what I saw on my feed, and on Trending, was anything but normal. The Louis Vuitton store in San Francisco’s Union Square had been ransacked and robbed clean, with multiple thieves running away with almost all the items in the luxury retailer’s supply. Video and pictures documenting the incident spread like wildfire on Twitter: one video racked up 1.5 million views. This robbery wasn’t unique to Louis Vuitton; on that day and throughout the month, other San Francisco stores like Burberry and Yves Saint Laurent were also burglarized in a spate of robberies affecting the city.

About a week later, the holiday season had begun, but the view in Union Square was more somber than it should have been. Instead of displaying bright and jubilant Christmas ornaments in their windows, many high-end retailers had their windows boarded up instead, either covering up the damage done by break-ins or protecting whatever glass was still left intact. In the midst of these gloomy pictures, I wondered how San Francisco had degraded so drastically from a shining “Metropolis of the West” to what seemed like a crime-ridden city. Amid a Twitter thread chronicling pictures of boarded-up stores and lamentations of San Francisco’s dreary state was a call-to-action from distressed San Francisco native and resident Michelle Tandler: “…get involved. Read San Fransicko, get on Twitter, engage with your neighbors, talk to local business owners.”

Curious as to what book Tandler was referring to, I probed deeper, finding out that San Fransicko was a 2021 book authored by disillusioned progressive Michael Shellenberger. The book’s subtitle, “Why Progressives Ruin Cities,” is provocative, to say the least, and hinted at a book that would challenge my prevailing viewpoints on urban policy while perhaps supplying the answers I was searching for. After reading this book, my assessment is that parts of the book were generally thought-provoking and had changed some of my views while affirming my core belief that San Francisco, a birthplace of modern progressivism, was in a dire situation that necessitates immediate address—an opinion that I feel has been trivialized or ignored by progressives. It is a book I would recommend to my left-wing friends—but only the first half. The second half of the book, unfortunately, departs from sensible policy and delves into Shellenberger’s signature “victimology” hypothesis, which is marred by his faulty reasoning, subtle racism and even some religious dogma. Such brashly insensitive arguments do not open the door to meaningful debate and likely only cater to conservatives, a minority in San Francisco and other urban hubs.

Before diving into what Shellenberger did right and wrong in his 300-page opinion piece, it is beneficial to determine what exactly is argued in San Fransicko. First, Shellenberger not only talks about San Francisco, though the city plays a large focus in his arguments; he also discusses other cities with progressive leadership, like Los Angeles and Seattle (this article, however, will mostly focus on San Francisco). He covers a wide range of topics that plague such cities today: homelessness and access to housing; drug addiction and abject displays of drug abuse (such as in the Tenderloin in San Francisco, or in the Blade in Seattle); and police-community relations and conflict (such as CHAZ/CHOP in Seattle in June 2020). One of Shellenberger’s most significant stances that draws a clear line in the sand between him and progressives is that he is staunchly against Housing First, a policy that argues that the first priority of homeless outreach is to provide housing, for which other services can be provided afterward. Shellenberger argues that Housing First doesn’t adequately solve the root causes of homelessness, namely addiction and mental illness.

Shellenberger ultimately believes in contingency plans—that support services should be provided first, and that housing should be provided after, contingent on positive results of supportive services. However, Shellenberger’s crown jewel and main argument advanced throughout the book is that he ties all the aforementioned topics into one theme: his hypothesis of the emerging belief of “victimology”; victimology, as Shellenberger concocts, is the belief that disadvantaged people in society shouldn’t be held to the laws and standards that a functioning society requires of them (such as not harassing passersby and not urinating in public). Victimology, Shellenberger believes, has heavily influenced progressive policy, and as a result, has driven progressive cities into chaos and lawlessness.

The first ten chapters of San Fransicko, apart from the occasional odd point or anecdote, contain well-reasoned arguments that could convince anyone, even a staunch progressive, that change is necessary. One agreement I have with Shellenberger is that the rule of law must be followed in order for a society to function, no matter who is committing the crime. No one—from the marginalized to the prosperous—should be able to get off scot-free for breaking the law, though the circumstances are absolutely essential to apply an appropriate punishment. This also applies to drug-dealing; people may have been introduced to the drug-dealing trade out of desperation, but the amount of suffering they are causing to their community is deserving of punishment. Shellenberger, thus, believes that current progressive practices are allowing society’s offenders to go unscathed. I also agree with this sentiment.

Perhaps the most controversial of Shellenberger’s arguments that I agree with relates to the homelessness issue in major progressive cities. Shellenberger believes that the homeless must be moved off the street, either voluntarily by the agreement to seek treatment and shelter, or even involuntarily, through forced relocation to treatment and criminal penalties for noncompliance. Although Shellenberger’s “involuntary assistance” argument is partially based on a general disdain that businesspeople and tech professionals have for the homeless, most of his rationale is based on a moral holding that assistance helps, and the government has an obligation to help those that cannot help themselves. I generally agree with the latter view: homelessness is bad for both the individual’s quality of life and the city’s image, and it does sometimes feel like some progressives would rather let homeless people be homeless than support a transition to housing and mental well-being.

The controversy surrounding People’s Park, Berkeley’s historical landmark-turned homeless encampment, presents a classic example: progressives have staunchly aligned themselves against development of the park, even as the offer includes housing opportunities for the homeless that reside there. Instead, organizations such as Defend People’s Park instead advocate for homeless people’s autonomy to illegally occupy the property and for defunding UCPD, even as more than 10,000 reported incidents in the park have occured in a 5-year period. It is worth noting that recent controversy over the proposed developments of People’s Park have spurred mutual aid networks to provide food and supplies—turning the Park into an oasis and lifeline of sorts. However, such actions legitimize illegal inhabitation of the park, which in turn may encourage continued errant behavior by a few of the Park’s inhabitants.

The advocacy of homeless people’s “right” to inhabit the area—even when it is not legally recognized—is another point Shellenberger makes, and is one of the book’s best quotes. In response to ACLU advocacy of civil rights, one of Shellenberger’s interviewees quips: “‘Civil rights lawyers… were more interested in people’s civil rights than their lives.’” A focus on the “rights” of homeless people—the right for them to live undisturbed while a select few harass and assault passersby, perform bodily functions in public and deal drugs—has come at the cost of decreasing everyone’s quality of life, from the homeless themselves to other residents to tourists.

However, just as Shellenberger’s brashness allowed him to cut through the noise, so too did it sometimes lead to fallacious, offensive and unconnected arguments. The departure from controversial yet sensible arguments starts around Chapter 11, when Shellenberger begins his “victimology” hypothesis, transitioning from empirical analysis into ideological hodgepodge that sounds more like a rabid manifesto than an academic commentary. Chapter 11 starts with Shellenberger’s analysis of the philosophical musings of Sartre and Foucault (he seems to have no formal training in philosophy) before including a verified falsehood about Supervisor Dan White’s defense during the Moscone-Milk assassinations trial in 1978, anecdotes embodying the problematic “bootstraps” mentality, and even an appeal to the modern conservative “participation trophies” talking point where he argues that recently emergent “coddle culture,” a byproduct of victimology, has contributed to the opioid crisis and inaction toward helping the homeless.

But the book contains more than just falsehoods, fallacies and non-sequiturs; there is also overt racism. In Chapter 12, Shellenberger starts off strong, utilizing his usual strategy of presenting evidence contrary to his argument. However, to counter the argument that Black people are disproportionately mistreated by police, he finds one researcher (Roland Fryer) who analyzes one city’s police department (Houston) to conclude that there is not enough statistical evidence to show that racial bias is a motivating factor in police shootings. This conclusion has been challenged in studies published responding to Fryer’s findings; nevertheless, Shellenberger is engaging in bad faith to base his arguments on the results of one cherry-picked study when it is made painfully clear that other forms of racial bias in policing exist.

Even worse, this conclusion is used to later advance Shellenberger’s hypothesis that victimhood is ingrained in Black culture, as if they were taught to feign suffering to receive sympathy and advantage from society. This line of reasoning is not only horribly racist, but it is also ignorant of the struggles Black people face today. Not only is “victimology” an absurd and harmful hypothesis, it is also nowhere close to being the dominant doctrine in San Francisco’s leadership and culture today. For example, Mayor London Breed has condemned progressive San Francisco District Attorney Chesa Boudin and declared a state of emergency in the Tenderloin, signaling that she wants to proactively fix the region. A vast majority of San Franciscans are extremely concerned about homelessness and want to see homeless people receive shelter—not to reinforce their “civil rights” to sleep on the streets. And, a preliminary poll shows that most voters support Boudin’s recall, another sign of change brewing in San Francisco.

This begs the question: who is Shellenberger aiming to convince by writing this book? Personally, as someone who holds several progressive views but has become dissatisfied with San Francisco’s condition, San Fransicko intrigued me, as I knew it would challenge me to think differently about what can be done to relieve the abject poverty and drug use that has damaged the city’s reputation. The book actually offers good insights, and Shellenberger uses his ethos as a former progressive contributor to his advantage. However, readers like me are lost after the first half of the book, when Shellenberger repackages conservative talking points, bizarrely quotes philosophical findings, cherry-picks controversial studies and advances a faulty, racist hypothesis about how society functions today. Shellenberger’s last few chapters—in which he envisions a statewide mental health agency trained to proactively and humanely chip at the homelessness crisis, is quite sensible, but unfortunately too far gone, as much of the book is dedicated to alienation and echo chamber politics rather than cogent argumentation and solution-building.