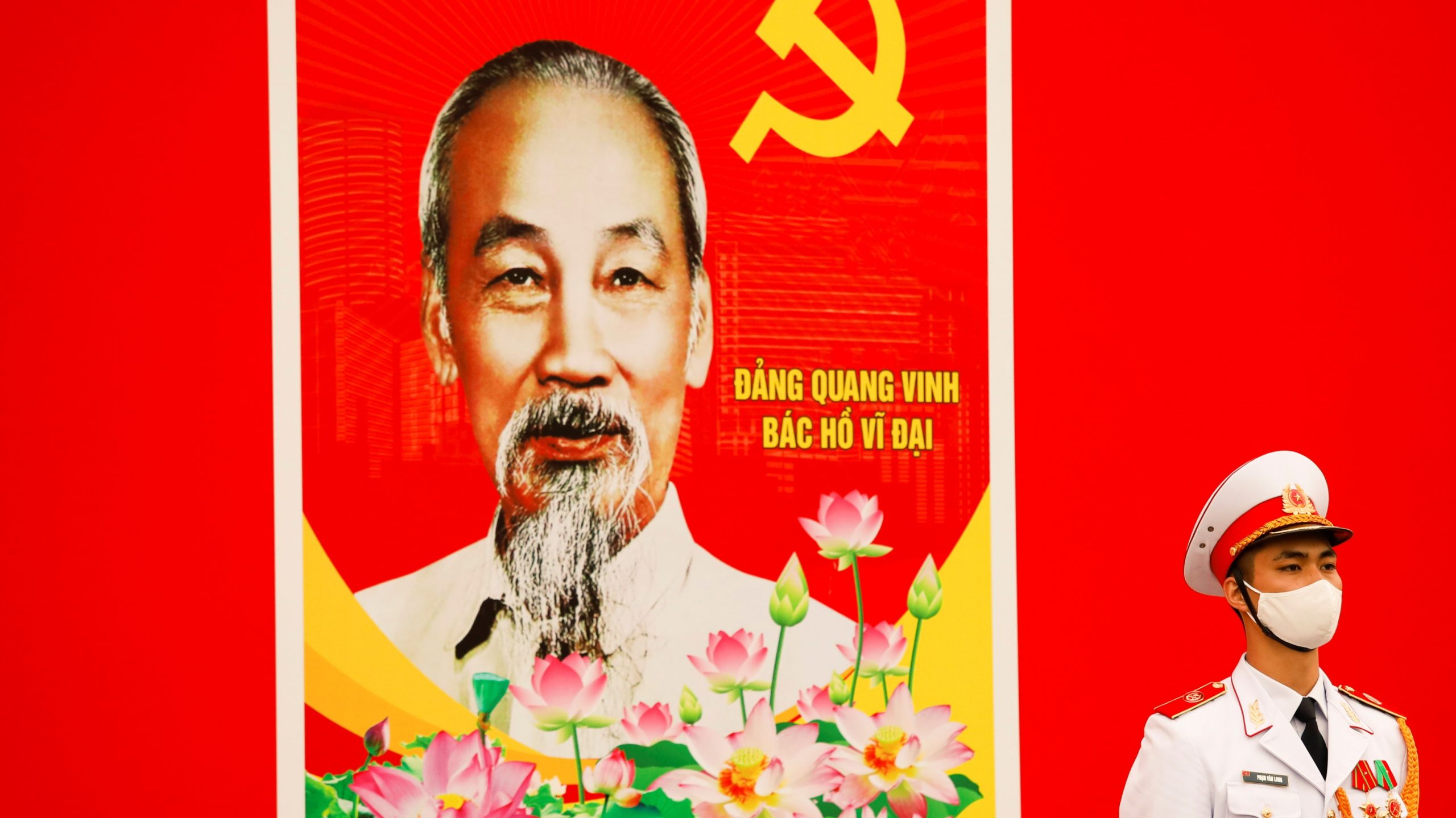 The Socialist Republic of Vietnam: once a major battleground of the Cold War, it is now better known as a vacation destination for Westerners with cash to burn. In the new era of tension  between China and the West, however, Vietnam has become an increasingly important player in the conflict. As one of the few success stories of development in Southeast Asia, it has attracted interest from nations and companies seeking an alternative to China and its increasingly harsh relationship with the United States. But Vietnam has a problem: every year it is crushing political dissent, resulting in a dismal human rights record. The issue now is whether Western democracies will choose to abandon their stance on human rights—one of their biggest criticisms of China—or will instead maintain their moral compass at the cost of a possibly vital ally in the region.

Vietnam is a single-party state, with the Vietnamese Communist Party being the dominant faction, and internal party politics decide the political and economic direction of the state. Every position of power within the government is through the party. Its system is fundamentally similar to that of the People’s Republic of China. The people accept this arrangement because the party has generally acted within the interests of the people and has contributed to the nation’s strong economic growth and improvement of the standard of living. In fact, Vietnam’s sustained healthy growth is one of the Southeast Asian region’s economic success stories outside of China. The party is also aided by its status as the group that broke the nation free from Western interference and granted its people genuine independence, first kicking out the French, and then defeating the Americans and reunifying the country. If the times are good for the Vietnamese people, on the whole, they are willing to accept party dominance and some of the issues that come with it. But the party has a major problem that it needs to address: corruption.

The party’s monopoly on power has helped generate a pervasive culture of corruption within it, ranging from top party leaders down to the petty levels of local jurisdictions. It is one of the major legitimacy issues the party faces, as the culture of corruption is so blatant that the average citizen has accepted graft to be a factor of daily life. Activities ranging from getting a speeding ticket to day-to-day business operations typically involve the greased palm of a government official. This is such an issue that corruption has become an informal tax, and the people are becoming increasingly fed up with it.

The justification for the party’s dominance is a careful balance of effective governance and political maneuvering. Anti-corruption drives and campaigns have been a large part of the government’s recent efforts at maintaining a semblance of legitimacy in the eyes of the public. Major figures within the government have been arrested in the process, such as military generals and incumbent members of the politburo, so it is more than a simple publicity stunt trying to gain sympathy from the people and goes far beyond what has occurred before. Dinh La Thang was voted out of the Politburo, the de-facto highest decision-making body in Vietnam, and sentenced to life imprisonment on the basis of corruption. This was an unprecedented fall from grace and punishment for a person of such stature within the Vietnamese governmental apparatus.

At the same time, however, considering the rampant nature of corruption within the state and how intertwined party dominance and corruption are, its positive effects are in question. Vietnam is the perfect government for corruption to thrive in; it is a closed single party state with no free media or independent courts, and the only checks and balances are from superiors within the organization. This is a system that relies on the morality of individuals for corruption to not occur, which is not a viable option in reality. It is clear that the party would rather tolerate corruption than risk losing their grip on power in the systemic change needed to ultimately fix the problem.

The crux of the issue is that the party is crushing any form of dissent that does not originate from within the party itself. The state of Vietnam is heavily repressive and despite the party taking on this new mantle of being tough on corruption, it still cracks down on those who voice criticisms of the government. Even the anonymity of the internet is not enough protection for most, as the government has put in place increasingly draconian internet laws aimed at increasing government control and monitoring capabilities. Some critics of the party have been arrested by the government during live streams in which they were protesting the government’s policies. Tactics and policies that are not so different from China’s own “great firewall” and “great cannon” are bringing the CCP’s trademark repressive stance into the digital arena.

Political repression is also a significant concern for the US around any relationship between the two nations; Vice President Harris made a note of pushing Vietnamese leaders on the nation’s spotty human rights record during her recent visit, and the former ambassador to Vietnam made a note of constantly carrying a card in his pocket during his tenure with the names of activists the US felt had been improperly imprisoned.

The entire situation is further complicated by the fractious relations in the East Asia region. China and the US have become increasingly antagonistic in their relations and many countries and companies are turning to Vietnam as an alternative to China. Vietnam is one of the more successful development stories in the region and a strong anti-China nation, which has made it one of the ports of call. For instance, GLP, the largest warehouse operator in Asia, is investing 1.5 billion dollars in Vietnam in a bid to dominate the logistics sector when companies require a supply chain shift from China to Vietnam. China and Vietnam’s relationship is historically a love-hate one, despite sharing very similar development stories and having shared governmental structures in the 20th century.

For thousands of years, China has considered Vietnam to be a smaller tributary state, and at one point even ruled Vietnam. In 1979 Vietnam invaded Cambodia and removed the Khmer Rouge, which had been heavily supported by the CCP. In retaliation, China invaded Vietnam. The conflict was inconclusive and both sides claimed victory, but it set a tone of bitterness between the two. These tensions have only been exacerbated since, with conflicts arising over the South China Sea around oil and fishing rights and each nation claiming sovereignty. China’s increasing dominance in international development in the Southeast Asia region, including in some of Vietnam’s neighbors, is further grounds for concern for the Vietnamese.

Publicly, the two nations profess a strong admiration for one another rooted in their shared histories and ideologies, best represented by a recent phone call between Vietnam’s Prime Minister and China’s Premier. Vietnam is also heavily tied to China by necessity and reality, China being its largest single trading partner. Vietnam is also China’s largest trading partner within the ASEAN agreement. Behind closed doors, however, Vietnam’s leaders are concerned about the rise of China’s aggression in the region. The former US ambassador to Vietnam, Ted Osius, described in an interview how Vietnamese officials once hesitant towards increasing ties with the US shifted their position when the Chinese moved an oil rig into disputed waters of the South China sea in 2014.

The strenuous relationship Vietnam has with China makes it a tempting potential ally against China for the West. The most visible instance of this is Kamala Harris’ recent visit to Vietnam aimed at currying support against China. The Vietnamese leaders were insistent on maintaining neutrality between the US and China, but it is clear that for multiple reasons they would not mind China being taken down a peg or two. We should also not forget that the Chinese are not standing around either waiting for the situation to resolve itself. They too are taking active steps in trying to drive a wedge between the US and Vietnam to ensure their interests are protected. The issue for Vietnam is that it needs to ponder whether backing the West against the Chinese will work, so that they do not end up being swallowed up by their larger neighbor in the event of a Western decline. The West, led by the United States, needs to determine whether it is willing to bite the bullet of accepting a repressive government as an ally.

James Freeman is a staff writer for the online section, studying Political Economy. He is mainly focused on international relations, specfically Asian and European politics.