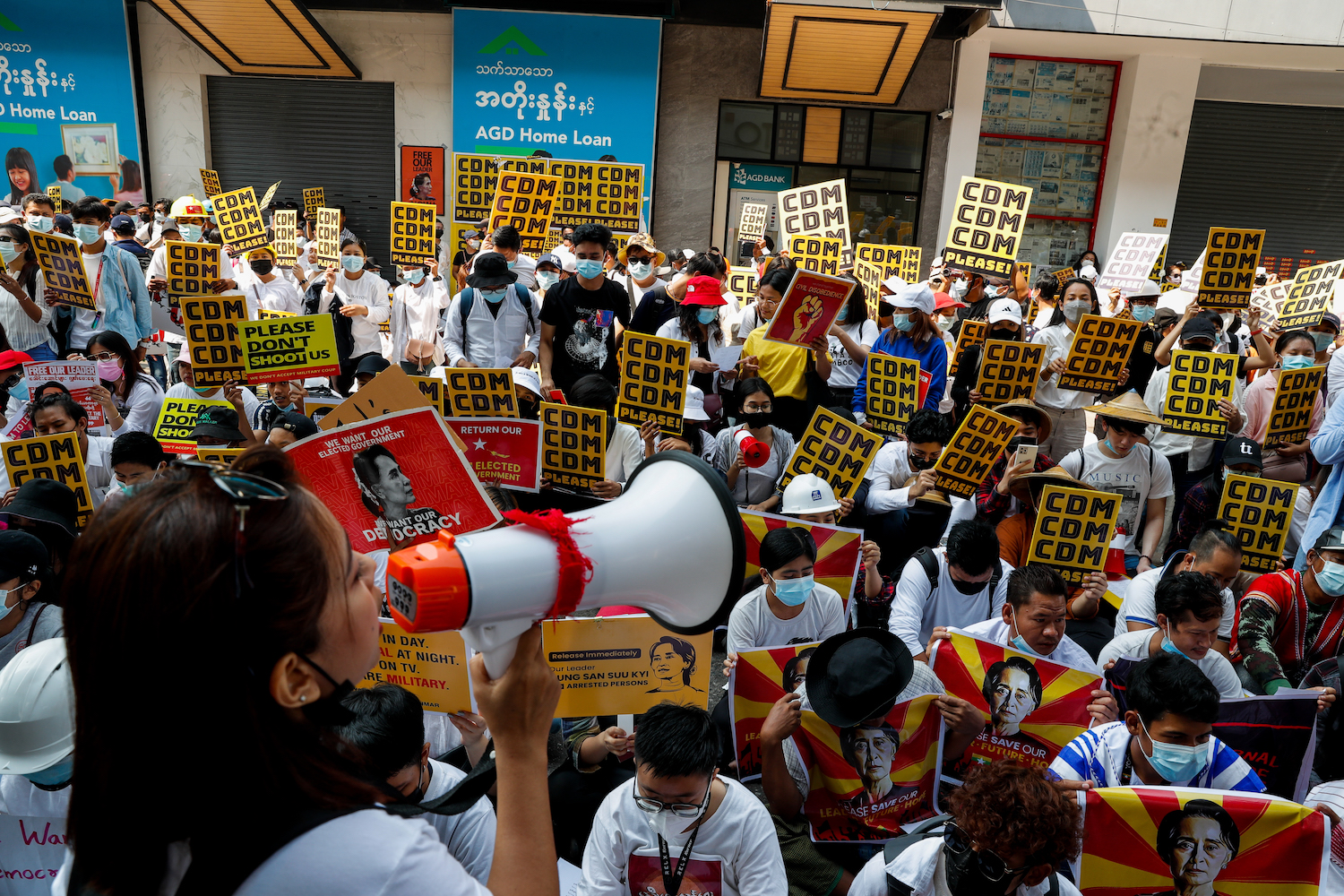 One year after Myanmar’s Coup, bullet casings line blood-stained pavements, and the sounds of gunfire, explosions and dampened cries of protest fill the air.

In an unprecedented period of civil war, violence in Myanmar has escalated, with intensifying conflict between the Tatmadaw (Myanmar’s armed forces) and its opposition armed civilian groups. The conflict has resulted in thousands of casualties, with at least 1,672 civilians killed and 12,654 arrested. Military attempts to crush rebellion after a coup d’etat in February 2021 have led to a campaign of terror, as civilians are being kidnapped and put into secret detention centers, where they are victims of physical and psychological torture.

Whether it is the damaging of Catholic covenants serving as hospitals or the burning of villages in the northwestern Sagaing region, the situation has evolved into an unmanageable humanitarian crisis spilling out of Myanmar’s borders, causing 860,000 Rohingya refugees to flee. Due to the volatile security situation, there is a reduced space for humanitarian organizations on the ground, and the question on the international community’s mind is how to address the atrocities unfolding.

This surge in violence follows decades of ‘political hot potato,’ as frequent attempts at political transition and democratization have been met with periodic rule by military junta (military-led government). In parallel with political instability, the Rohingya population has been persecuted by the government since the 1970s in a military-led ethnic cleansing campaign, which has included forced displacement and alleged sexual crimes.

In February 2021, Senior General Min Aung Hlaing and other military leaders staged a coup and installed a military junta, formally called the State Administration Council, claiming that the Union Election Commission failed to ensure a fair and transparent election. As civilian leaders like Aung San Suu Kyi were charged with political fraud and taken as prisoners of war, conflict erupted across the country. The self-proclaimed legitimate government of Myanmar, the National Unity Government (NUG), is composed of ethnic minority groups and representatives from the deposed government and has aimed to unify ethnic divisions and declare war on the junta. Military violence escalated in the months to follow, from indiscriminate shooting into live civilian crowds to the destruction of entire villages, spurring an efflux of refugees. Clashes between the NUG’s armed division, the People’s Defense Force, and the State Administration Council led to widespread violence across the country, causing the current volatile situation.

The ICC, an international ‘hail mary’ for human rights abuses, approved a full investigation into the alleged genocide of the Rohingya population in Myanmar in November 2019. Although Myanmar is not a party to the Rome Statute, Bangladesh is a member of the ICC and contains densely populated refugee camps with victims of the atrocities. As the Court has territorial jurisdiction over crimes that are taking place within state parties, they are able to investigate Myanmar further. The Chamber has acknowledged the widespread, systematic nature of the violence, with mass deportations occurring across the Myanmar-Bangladesh border and persecution of the Rohingya. These crimes reach the ‘gravity threshold’ and could qualify as crimes against humanity, warranting further ICC investigation.

Recently, on the 27th of February, ICC Prosecutor Karim AA Khan QC finished a five-day visit to Rohingya refugees in Bangladesh. Although the ICC will continue to pursue the investigation, Prosecutor Khan centered his visit around transitional justice mechanisms, discussing community empowerment in the investigation and potential sexual- and gender-based violence victim support. On behalf of the ICC, Prosecutor Khan expressed, “we are here to work with you to build the foundations of justice. The road to accountability will not be simple, but it is a goal we can only achieve by working together.” While promising future redress to the Rohingya population, the intent to ‘accelerate’ retributive justice bears false hope for addressing the current crisis unfolding in Myanmar.

Typically used later in post-conflict reconstruction, transitional justice is a process that aims to address large-scale systematic human rights violations in a country through the legal punishment of the perpetrators (retributive justice) and by repairing the harm caused to the community (restorative justice). Mass atrocities devastate communities and bring political fragility, with institutional instability and shared psychological trauma. While its aims vary depending on the context, transitional justice centers its approach on the dignity of individuals, the acknowledgment of violations, and prevention of future violations.

Mechanisms typically fall into four categories, criminal prosecution of perpetrators, truth-seeking by non-judicial bodies to find the causes and consequences of the atrocities, reparations, and reform of laws and institutions. However, the field of transitional justice must not be approached with a ‘one-size-fits-all’ attitude, as “the distribution of power will determine much of what can be done.”

Current attempts at transitional justice in Myanmar have ultimately failed, as legal prosecution is ‘toothless’ and redress impossible with the conflict only escalating in severity. While the UN Independent Investigative Mechanism for Myanmar (IIMM) documented the murder, sexual and gender-based violence, forced labor, and torture of the Rohingya population, at this stage in the process, the evidence is only collected for future prosecutions. The ICC is the only international mechanism currently trying to effectuate justice in Myanmar and this alone will face several challenges in the ongoing conflict.

The threat of transitional justice alone can serve as a barrier to peace negotiations, as government perpetrators are traditionally expected to participate in the process. This can ultimately lead them to halt the country’s peace process and exacerbate harm ‘on the ground.’ International echoes for retributive justice have spurred Western countries to take steps to punish alleged perpetrators through sanctions on military officers. With the ‘genocide’ label introduced into international dialogue, to remain on the right side of ‘justice’ in the history books, states are imposing further bilateral sanctions, seemingly with little consideration of the consequences for victims on the ground that will possibly face retaliation.

Not only is the ICC temporally and geographically limited in jurisdiction over crimes committed since the 25th of August 2017 where at least one element must have occurred in Bangladesh, but it will take a long time to prepare and prosecute a case. By ‘putting all eggs’ in the basket of the ICC, which will take years to ‘hatch,’ the international community is doing an injustice to the victims of the atrocities currently transpiring in Myanmar.

Hence, transitional justice is typically reserved for later discussion in post-conflict states. It is impossible to adequately address the horrors of the past when they are still unfolding. The ICC’s potential to bring justice to the people of Myanmar in its current state is a political fallacy. The world is ‘jumping the gun’ by using this mechanism to avoid accountability for its inaction in the evolving crisis, particularly as the UN Security Council has turned a ‘blind eye’ to the atrocities.

So, what is the solution in Myanmar? The evolving nature of the conflict creates a sense of urgency, so humanitarian assistance seems like a good place for the international community to start. This could be in the form of Covid-19 assistance, aiding internally displaced persons, or contributing economic support to the collapsing state. To avoid the West’s imperialistic tendencies, the global community must centralize local organizations in their aid strategy to balance the desire for justice with the distrust for institutions.