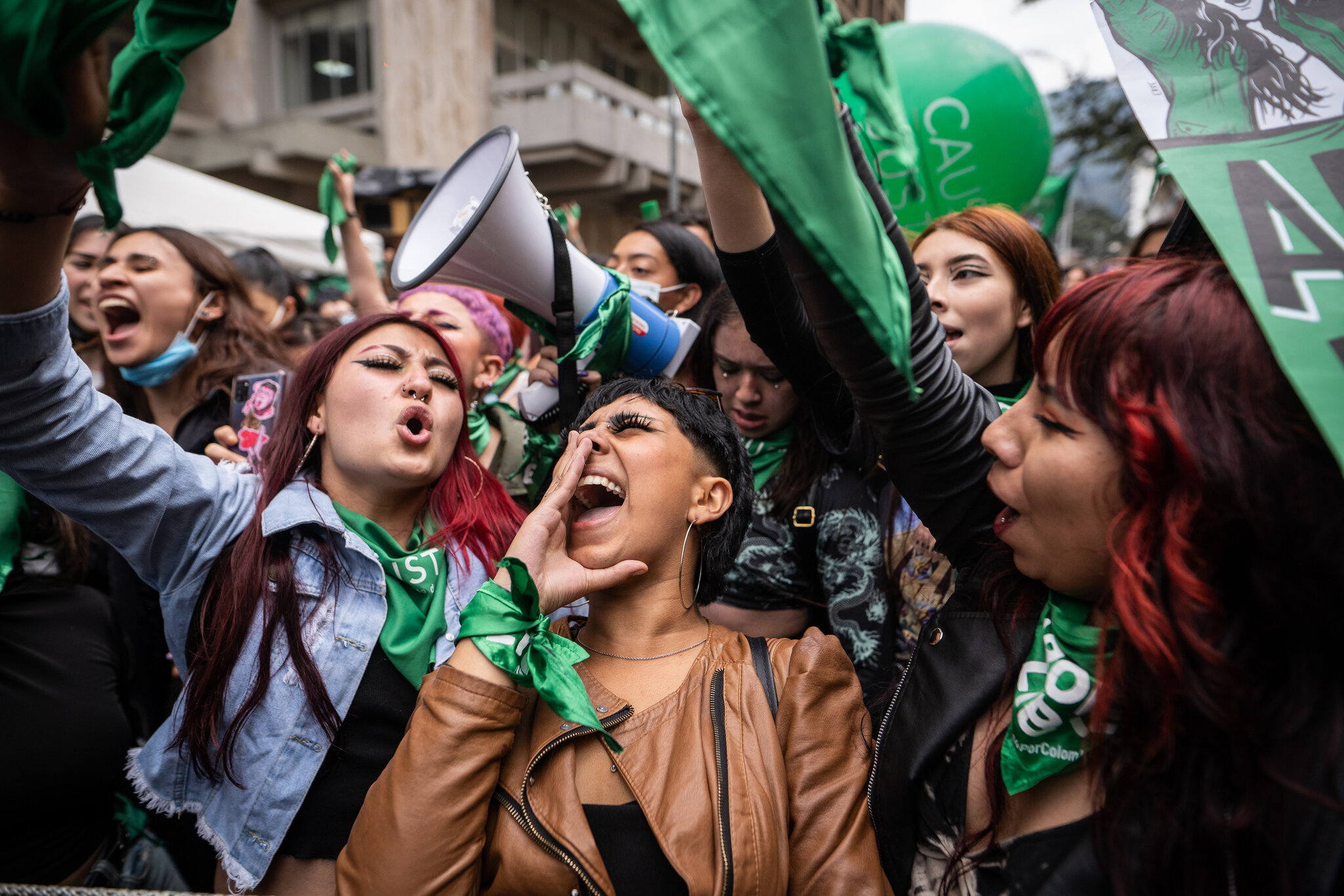 ​​On Feb. 21, Colombia’s Constitutional Court delivered a groundbreaking decision for reproductive rights. The country’s top court voted in a 5-4 ruling to decriminalize abortion for up to 24 weeks of pregnancy, delivering another victory for the Marea Verde, or Green Wave in Latin America—a movement that has caused landmark reforms that deliver greater reproductive rights to women, such as decriminalizing abortion in countries like Argentina and Mexico.

The path toward achieving reproductive justice in Colombia has taken a rapid upward trajectory during the past few decades. Prior to 2006, the country pushed forth an absolute ban on abortions. This ban was overruled in 2006 and women were then allowed to seek abortions solely in cases of fetal abnormality, incest, and rape, or if the pregnancy posed a threat to their life or health. However, even with this ban, there were still 450,000 illegal abortions performed in Colombia each year and abortions continued to be highly illegal, unsafe, and unequal, according to the Guttmacher Institute. Unsafe abortions were also the leading cause of maternal mortality, with an estimated 132,000 cases of abortion complications and 70 deaths occurring from unsafe abortions each year in Colombia. In addition, low-income and rural women faced the most barriers in accessing safe and legal abortions. In Colombia, the poorest women still have the widest gap between actual and wanted fertility and thus have around one more child than they wanted to have. The estimated cost of a legal abortion in Colombia where the practitioners utilized the dilation and curettage method was USD $200, affecting low-income women’s access to abortions and causing them to turn to clandestine forms of abortion. Half of all abortions performed in Colombia use the drug misoprostol, which can lead to a high rate (32%) of complications, such as incomplete abortion or heavy bleeding, when it is handled by someone who is not knowledgeable about the drug.

Of course, these women did not turn to clandestine forms of abortion because they believed it was a safe option, rather, it was the only option prior to Feb. 21, due to abortion’s frequent criminalization. Each year, courts in Colombia open around 400 cases against women who had abortions, or against individuals who helped them seek abortions. Since 2006, at least 346 individuals have been convicted in these cases. Poor women were disproportionately criminalized for seeking abortions in Colombia, as 34 percent of Colombian girls and women who were investigated for abortions between 1998 and 2019 were domestic workers, according to the Colombian Attorney General. Additionally, the previous criminalization of abortion discouraged women from seeking the necessary medical care for abortion complications, as 73 percent of abortion investigations launched between 1998 to 2019 were instigated by hospital personnel, in violation of the patient’s confidentiality, according to the Colombian Attorney General’s Office.

Attorneys and NGOs prepare for a complicated legal battle

As a result of the high frequency of abortion complications and deaths, unsafe clandestine abortions, and stigmatizing nature of the laws against abortion in Colombia, an attorney named Andrés Mateo Sánchez Molina noted that the Colombian penal code which criminalized abortion was a violation of Constitutional rights, such as the right to freedom, equality, and human dignity. Additionally, Causa Justa, a reproductive justice movement, filed a lawsuit against the Constitutional Court in September 2020 to decriminalize abortion in all cases. Joined by 134 activists and 91 organizations such as Human Rights Watch, Causa Justa’s petition argued that the criminalization of abortion is unconstitutional, carries a stigma and is the “greatest obstacle” keeping women and girls, particularly those of vulnerable backgrounds, from seeking safe abortions. The petition added that legal and safe abortions only accounted for 1 to 9 percent of the 400, 412 abortions that occur each year in Colombia.

Causa Justa’s petition also emphasized that young girls and those of low-income or rural backgrounds were most negatively affected by the criminalization of abortion.

“Women’s right to equality is violated when the structural barriers to access under the three exceptions disproportionately affect women and girls in situations of vulnerability,” the petition read. “These barriers affect mainly women living in rural and remote areas, low-income women, adolescent girls, women, and girls living in situations of armed conflict, and victims of gender violence, including physical and sexual violence.”

Between Sánchez Molina and the reproductive justice movement, Causa Justa’s case was heard first by the Constitutional Court and was met with hundreds of supporters holding green handkerchiefs and dozens of opponents outside the courthouse in Bogotá. Support was inevitably varied as 82 percent of Colombian respondents said they supported abortion in some cases, only 26 reported they support abortion in all circumstances, in a 2021 survey conducted by the nonpartisan firm Ipsos. Despite the variation in support, the court ruled in favor of Causa Justa, leading their supporters to dance around the courthouse and celebrate while holding or wearing green handkerchiefs. These supporters are part of the “Marea Verde” or Green Wave movement for reproductive rights in Latin America, which has been making great strides recently. Specifically, Colombia’s decriminalization of abortion follows Argentina’s legalization of abortion in December 2020, as well as Mexico’s decriminalization of the procedure in September 2021. Consequently, three out of four of Latin America’s most populous countries have expanded access to abortions.

Colombia has indeed made extraordinary strides towards achieving reproductive justice recently, with the shift from a near-total ban on abortions to partial decriminalization over a period of 16 years. Additionally, the Colombian Constitutional Court’s decision to recognize a non-binary gender marker earlier this month may mean that the country is even stepping in the direction of advocating for intersectional reproductive reform.

However, despite this upward trajectory that reproductive and gender rights have recently been taking in Latin America, it is important to recognize that many Latin American countries still lack adequate laws to support reproductive justice. In particular, El Salvador’s President, Nayib Bukele, noted in a Facebook post that he will not make any constitutional changes to abortion laws, which bans abortion in all cases and boasts one of the most restrictive abortion laws in the world. Specifically, in 2011, an El Salvadorian woman was sentenced to 30 years of prison and spent 10 years behind bars on charges of aggravated homicide because she had an illegal abortion. Similarly, Honduras bans abortions and imposes prison sentences of six years on those who provide or undergo abortions.

Furthermore, abortion, even in the case of rape or incest, is illegal in the Dominican Republic. With the Marea Verde in full force, it is more important than ever that lawmakers in Colombia, Mexico, and Argentina continue to apply pressure on Latin American governments who still impose draconian abortion laws which deprive women of their fundamental reproductive rights if they wish to see a reproductively just Latin America.

Published in Uncategorized and World