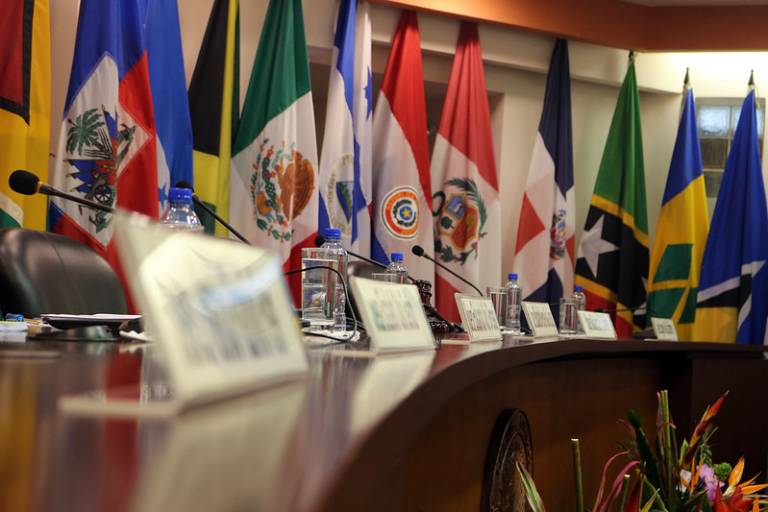 On February 9, Indigenous elder Rodrigo Tot testified before the Inter-American Court of Human Rights (IACHR) on behalf of Agua Caliente, a Q’eqchi’ Maya community. For the first time in history, in Maya Q´eqchi´ Indigenous Community of Agua Caliente v. Guatemala, Guatemala is facing judgment in international court for violating Indigenous collective land rights. The residents of Agua Caliente Lote 9 paid the Guatemalan government in full to purchase their land but have never received a definitive title. As the land-title process has staggered and stalled, mining operations have encroached upon Indigenous lands, sparking legal disputes and violent state repression of Indigenous protestors. Despite a national court’s suspension of a prominent mining project’s license, operations continued with the government’s complicity. A ruling on the case is tentatively expected within a year.

A legal victory for Agua Caliente would be momentous—all the more so coming on the heels of another landmark ruling for the Guatemalan Maya that the IACHR issued last December.

The December case, Indigenous People Maya Kaqchikel from Sumpango v. Guatemala, arose from a 1996 telecommunications law in Guatemala, which allocated radio frequencies to the highest bidder in a public auction. Under the law’s provisions, hundreds of inspections and seizures were perpetuated against unauthorized radio stations. Among them were Radio Ixchel, operated by the Indigenous Maya Kaqchikel from Sumpango, and Uqul Tinamit, operated by the Maya Achí. The Inter-American Commission of Human Rights submitted the case to the IACHR, asserting that Guatemala breached the American Convention of Human Rights (ACHR) by preventing Indigenous communities from exercising their right to freedom of expression and their cultural rights via radio.

The 2021 ruling affirmed Indigenous rights to an unprecedented extent. The Court concluded that states are obligated to guarantee pluralism in the media; as such, Guatemala’s radio regulations violated the ACHR by only considering finances as the criterion for allocating radio frequencies. This framework impeded free expression and encouraged indirect discrimination against Indigenous people, considering the role of radio in preserving Indigenous languages and fostering participation in cultural life.

Underpinning the Court’s December ruling was the determination that due to their conditions of poverty, social exclusion, and discrimination, the Maya lacked the means to compete with commercial radio stations. Indigenous peoples, according to the Court, could never enjoy true access to the radio as long as the law did not account for the situation of poverty in which the majority of Indigenous communities live. Lamentable but true, the observation is equally relevant to the Agua Caliente case.

Indeed, although the cases are separated by no more than a few months, both are bound up in a long and tortuous past. The ancient Maya, with achievements ranging from a fully developed writing system to remarkably accurate pre-telescope astronomy, made an indelible mark on history. The heart of the illustrious civilization lies in what is today Guatemala, where its descendants now comprise 42% of the national population. The intervening centuries, however, were characterized by the systematic oppression of the Maya peoples at the hands of government actors, beginning with sixteenth-century Spanish colonists who forced the Maya to labor on plantations as slaves. As the privatization of land proceeded in subsequent centuries, destroying the Indigenous tradition of communal ownership, those of Spanish descent solidified control over the country’s political and economic systems.

More recently, in the 1960–1996 Guatemalan Civil War, thousands of civilians experienced human rights violations in the forms of torture, kidnapping, and execution. The state was responsible for 93% of violations and 83% of victims were Maya, whom the state blamed for supporting the insurgency. In 1999, Guatemala’s post-war truth commission recognized that the conflict involved “acts of genocide” against the Maya. The mass murders damaged the Maya’s capacity to transmit oral history, medicinal knowledge, and language, and with 1.5 million Maya displaced, many had no choice but to attempt to resettle on less fertile regions of land.

By now, the war has ended, but its legacy persists in the form of socioeconomic disparities. The World Bank has estimated that over three-quarters of the Indigenous population lives in poverty, a rate far higher than the national average. What is more, the majority of Indigenous children under five suffer from chronic malnutrition. This context reflects the grinding uphill battle for equality for Indigenous people in Guatemala, a situation that is largely mirrored, to a greater or lesser extent, across Latin America. To no surprise, during the COVID-19 pandemic, Maya communities have been among the hardest-hit.

Hence, while the specific issues that each case addresses may be vastly different—it is not often, after all, that free-speech protections align with assertions of collective land ownership—both must be addressed within the context of structural inequality that affects the Maya in Guatemala. The questions before the IACHR in the Agua Caliente case, including Guatemala’s lack of legislation to guarantee collective land rights and failure to ensure prior consultation with Indigenous peoples concerning a mining project on their land, have the potential for wide-reaching reverberations. Just as the December ruling promoted Indigenous rights to engage in cultural life through language, an IACHR decision in favor of Agua Caliente would prioritize the longstanding historical and cultural ties of Indigenous people to their land over avaricious corporate undertakings.

Leonardo Crippa, an attorney representing Agua Caliente, told the Associated Press, “This case brings to the court, for the first time, a chance to rule on whether governments should act to recognize the rights of Indigenous peoples to permanent sovereignty over their natural resources, as a principle of public international law.”

The international character of both cases adds a dimension to their significance. The IACHR was born in 1979 as an instrument to oversee compliance with the American Convention on Human Rights, an international human rights treaty with 23 state parties throughout North and South America. These immediate effects of these cases may be local, but their impacts extend beyond the national level, uplifting Indigenous communities all across the Latin American region.

The cases thus speak to the unique virtues of international human rights courts: while not intended to supersede national courts, these systems provide an avenue for redressing human rights grievances that national governments have failed to remedy. In this respect, regional human rights courts can allow marginalized and oppressed groups to operate outside a national judicial system that has failed to acknowledge and rectify infringements upon their human rights—especially when, as in both cases considered here, the state itself is responsible for infringements. The message is clear: if states are not willing to defend the rights of all their citizens, rather than merely the privileged and powerful few, then other actors on the international stage will take matters into their own hands.

“This is the final stage in the international litigation,” said Crippa. “The decision that the court will issue will be final and binding.”

In the meantime, the Agua Caliente community can only wait and hope.

In a virtual press conference, Tot remarked that the Maya have awaited justice for over four decades. “There are other communities in the same situation. We need to legalize our lands.”