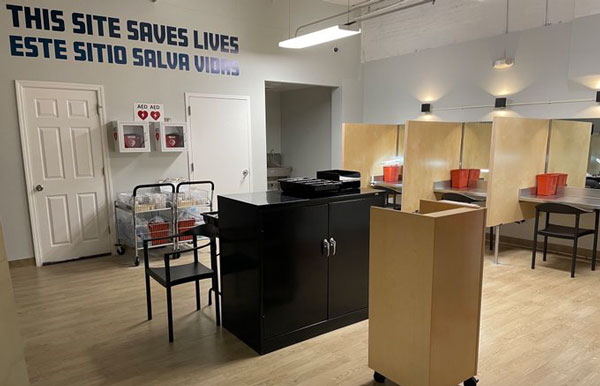 For the past two years, the COVID-19 pandemic has been the defining health crisis of our lives. Government agencies rushed to implement effective public health guidelines, the scientific community rallied together to develop a novel vaccine in record time, and the public (for the most part) tolerated intense regimens of masking, quarantining, and testing in order to keep themselves and others safe. But as we start to regain control over the COVID-19 epidemic, we are again faced with another health crisis, one that we have failed to adequately address for almost three decades: the drug overdose epidemic.

In 2021, more than 91,000 people died in the U.S. due to drug-related overdoses; in 2015, that number was less than 53,000 people. Social isolation and inability to receive treatment for addiction caused deaths to spike during the pandemic, but overdose deaths have been increasing at an alarming rate for years. The illicit drug market has become increasingly contaminated with fentanyl, a synthetic opioid approximately 100 times more potent than morphine. Drug dealers have been mixing fentanyl with illegal substances as a cheap method of increasing their potency which has proved lethal. Comparing the 12 months ending January 31, 2020 and the 12 months ending January 31, 2021, overdose deaths involving fentanyl rose more than 55%.

Making headways in the drug overdose epidemic has proved exceedingly difficult. Unlike the COVID-19 pandemic, the overdose epidemic is wrought with social mores and judgements of human character. Many see people with drug addictions not as patients with a disease but as weak-minded individuals who succumb to base pleasures that illicit substances provide. This has been the philosophy driving the use of the criminal justice system to punish and deter drug use by incarceration, but the war on drugs has yielded meager results. After 50 years, both the law enforcement and scientific community have agreed that remedying the drug overdose epidemic through arrests, drug seizures, and incarceration have not worked. Drug users are merely cycled in and out of the criminal justice system with little to no access to treatment and therapy. In addition to the issue of addiction itself, the inability of current systems to link drug users to healthcare has allowed perfectly treatable illnesses such as Hepatitis C to flourish unchecked.

But slowly, policy makers and government officials are beginning to accept the growing body of scientific literature and evidence that addiction and drug overdoses are medical issues that are tractable with appropriate public health measures. President Biden’s American Rescue Plan made a historic $30 million commitment to services such as the provision of sterile syringes and distribution of overdose-reversal medications and fentanyl test strips. He is explicitly embracing harm reduction, a philosophy that meets people “where they’re at” and advocates for strategies that mitigate the negative consequences of drug use. Conservative backlash ensued over President Biden’s embrace of harm reduction. Texas Senator Ted Cruz even tweeted, “Biden crime policy: Crack pipes for all,” showing that a criminal justice system approach to drug policy is still prevalent on Capitol Hill. But the science is out and the research is clear: harm reduction strategies save money, reduce disease transmission, reduce overdoses, and save lives.

As commendable as Biden’s harm reduction efforts are, they are only the first step. The United States should follow the example set by countries throughout the world and establish “overdose prevention centers.” Overdose prevention centers go by many other names – safe consumption sites, safe injection sites, supervised injection sites, overdose prevention facilities – but the idea is the same: people bring their own drugs to these sites which provide supplies such as clean needles for people to use their drugs safely. Medical professionals on site supervise their drug use and administer life-saving, overdose-reversal medications such as naloxone if they overdose. They can also provide tools such as fentanyl test strips so that drug users can make sure that their drugs are not tainted with lethal amounts of fentanyl.

But overdose prevention centers can do more than reverse overdoses that happen on site. They can serve as facilities that connect drug users to resources and medical care that allow them to get treated for substance use disorder. The medical tools to address substance use disorders have long existed. For example, patients addicted to opioids can be treated using methadone, an FDA approved medication that simultaneously reduces opioid cravings and prevents withdrawal symptoms. Unfortunately, these tools and medications have been seriously underutilized. According to a study published in the Annals of Internal Medicine and funded by the National Institutes of Health, less than a third of patients with opioid use disorders are prescribed any medication for opioid use disorder.

Overdose prevention centers can also help reduce the economic burdens of the drug overdose epidemic. According to the Centers for Disease Control and Prevention, the total economic cost of the drug overdose epidemic in the United States in 2017 was over $1 trillion, and the number of overdose deaths has increased by approximately 30,000 since then. Building facilities that prevent overdoses and move drug users into treatment reduces the cost of emergency care, hospital stays, and ambulatory services. Their ability to reduce disease transmission and drug use can mitigate the development of more severe chronic conditions that are expensive to treat. And saving lives allows drug users a chance to be economically productive and contribute back to society.

Overdose prevention centers throughout the world, however, have produced a growing body of evidence showing that these facilities do not have the adverse effects that many claim or fear. In London, the opening of a medically supervised injectable maintenance clinic created no increase in the number of people who used drugs or in the rate of crime in the area according to research published in the journal Mental Health and Substance Use. In fact, studies have shown that overdose prevention centers have reduced drug use and created additional positive externalities. A 2021 study published in the journal Addiction showed that public injections and needle sharing were reduced by more than 5% after the opening of a Canadian supervised injection site. Research in Sydney, Australia showed that there was a significant decrease in discarded syringes and littering after the opening of an overdose prevention center.

To better understand the perspective of people who use drugs,I spoke with Finn Black, student at the UCSF School of Nursing working towards a MS in advanced public health nursing. They have spent years providing health care and advocacy to unhoused people in the Bay Area, a population with relatively high rates of substance use disorder. “A lot of people develop a substance use disorder after they lose their housing,” said Finn. “There are a lot of honestly understandable and adaptive reasons to use drugs if you’re on the streets. A lot of people use stimulants like meth or cocaine because they need to stay awake at night because they’ll be assaulted if they fall asleep. Especially for women who are at risk of sexual assault. And living on the streets can be very dehumanizing. You’re invisible, people pass you by, treat you like garbage. For a lot of people, drugs are the most accessible coping tools that they’re able to get while on the streets.”

In understanding why drug users – and unhoused people in particular – use drugs, the purpose and value of overdose prevention centers becomes clear. “We really need to think about the purpose of an overdose prevention center,” said Finn. “I don’t think it’s always productive if we approach it as ‘we’re keeping people alive for now so that one day, they will be in treatment.’ Not everyone will necessarily want to go into treatment. If people do and that’s their goal, awesome – let’s support them. But if someone wants to continue using drugs, we don’t want to say, ‘it would only be worth it to keep this person alive if one day they want to stop using drugs’. We want to say ‘this person’s life has value and is worth living regardless of whether they want to stop using drugs or not.’ We should still want to provide that person with care.”

Overdose prevention centers are not crack houses that enable drug use. They are evidence-based measures that save lives, each one worth protecting. When tens of thousands of lives are being lost every year and even more deaths are projected to occur in the future, old tactics should be discarded and new tactics embraced. States should begin opening more overdose prevention centers to meet the needs of the people on the ground and incorporate drug users into a more integrated medical system. While the Biden administration has made some progress, much more is yet to be done.