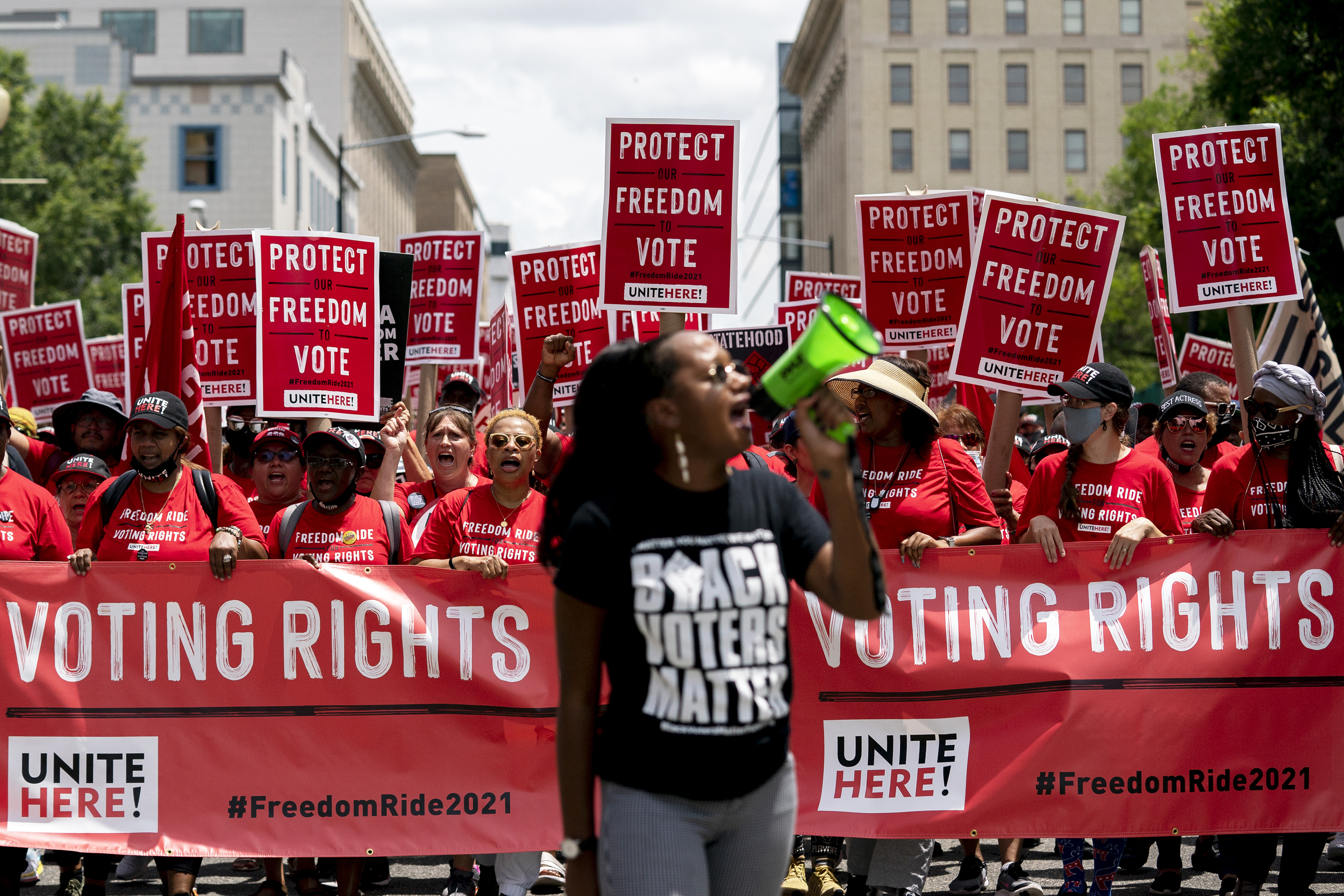 Fish live in water, humans breathe air, and minorities vote for Democrats. Right? I am a person of color and have aligned myself with the values of the Democratic Party, so it must be natural in American politics that voters of color will consistently turn out to elect Democrats. This seems to be the view of some high-profile politicians willing to preserve old Senate institutions over the voting rights of Americans of color, and particularly Black voters, who turn out crucially, massively, and overwhelmingly to elect Democrats.

In the face of egregious modern gerrymandering and voter suppression laws, the era of politicians taking voters of color for granted must come to an end. Time and time again, minority voters have saved Democrats and American democracy as we know it. Now, it is long overdue for Democrats to reciprocate and save minority voters.

The Democratic Party has not always been the party supported by racial minorities in the United States. In fact, it was not until the mid-to-late twentieth century that support among Black voters for the Democrats took off. Dr. Robert Van Houweling, a professor of Political Science at UC Berkeley who specializes in American politics and political behavior, shed some light on the history of minority support for the Democratic Party and outlined that “the party that Black voters would overwhelmingly vote for was essentially up in the air in the late 1950s, but with Democrats’ passage of the Voting Rights Act and Civil Right Act in the 1960s [legislation that combatted racial discrimination in labor and political processes], the Democratic Party was able to cement support among Black voters, while driving away racially conservative white voters.”

Subsequently, since the 1970s, Black voters and other racial minorities have consistently voted for Democrats by overwhelming margins. In the 2020 presidential election, 87% of Black voters, 65% of Latino voters, 61% of Asian voters and 55% of other non-white racial and ethnic groups voted for President Biden. While such groups overwhelmingly vote for Democrats nationally, their votes have also proven essential to the success of Democrats in the tightest of state races; in one of the 2021 Georgia U.S. Senate runoff races, 92%, 64%, and 59% of Black, Latino, and Asian voters voted, respectively, for Jon Ossoff (who won only by a little over 1% statewide against Republican incumbent David Perdue).

Evident in recent critical races, Black and minority voters prove crucial to the success of Democrats. Consequently, when faced with overwhelming support for the Democrats from such vital voting blocs, the Republican Party has assumed the mission of suppressing minority votes, particularly those of Black and Latino voters, to cement its electoral success through voter suppression and surgically precise gerrymandering. Notably, in Georgia, the very state which provided Democrats a governing Senate majority and President Biden with sixteen electoral votes, Republicans control the Georgia General Assembly and governorship. With their GOP state trifecta, Republicans enacted some of the most offensive iterations of voter suppression policies. In April of 2021, among other draconian measures, Georgia Republicans single-handedly banned anyone who is not an election worker from providing food or water to voters in line and permitted counties to close polls for early voting for up to two Sundays before an election.

On average, in 2018, Latino voters waited in line 46% longer than white voters to vote, while Black voters waited 45% longer than their white counterparts; the more tired, hungry, or exhausted one is, the less likely they are to stay in line. Who does the law really impact?

On Sundays leading up to elections, many Black churches host “souls to the polls” events in which organizers transport voters to polling places to cast their ballots. Who does the law really impact?

For the GOP, suppressing Black votes does not suffice, so Georgia Republicans have also turned to diluting Black Democratic votes. In 2021, Georgia passed new gerrymandered maps for federal Congressional districts which added a safe Republican district and erased a potentially highly competitive district.

So how do Democrats respond to such blatant, racist attempts to secure partisan victories? Like much good legislation, voting rights died in the graveyard of progress, the Senate; Democratic Senators Kyrsten Sinema (AZ) and Joe Manchin (WV) voted with Republicans to reject an exception to the filibuster to pass legislation to abate restrictions Republicans have imposed in states like Georgia. “Now that the Democrats’ hopes for a filibuster carve-out or exception failed, there is no way for Senate Democrats to work around the filibuster to pass voting rights legislation,” Professor Van Houweling contends.

It is appalling that two Democratic Senators have been able to stall progress in the name of preserving an old, outdated Senate rule. Sinema has reasoned that by even making an exception to the filibuster to protect voting rights, she would be “cementing uncertainty and further eroding confidence in our government.” However, the converse is true. When voters of color are harassed with the threat of constant restrictions and limitations on their right to vote, confidence in democracy erodes. When Sinema decides to illogically defy the will of the voters of color that were crucial to her election in the first place in order to retain a Senate procedure that only 19% of Americans are familiar with, she herself is cementing uncertainty in our government.

To protect the voters of color who elected Democrats in the first place, Democrats must confront the filibuster. The filibuster, which now effectively bars Democrats from passing meaningful legislation in the Senate without support from at least ten Republicans, has been saved at the expense of minority voters.

Democrats, and voters collectively, must also face the reality of the situation: the death of voter protection in the Senate is not the Democratic Party’s fault. While there are more steps that Democrats could have taken to bolster messaging and rally public support, 48 Senate Democrats did what was just and chose to protect democracy over problematic Senate rules. We must reframe the conversation and place direct blame on the Senators who disregard the urgency of protecting BIPOC voters: Sinema and Manchin.

Furthermore, the White House must do the same. After the Senate vote on the filibuster, President Biden released a statement expressing disappointment in the Senate for failing to pass such crucial legislation. Absent from the statement were the names “Sinema” and “Manchin,” and the word “filibuster.” The White House has made monumental strides to protect and advance racial progress. Unfortunately, until the Administration concertedly reframes the discourse surrounding voting rights to confront the filibuster for what it is—a tool being used by all Republicans, Manchin, and Sinema not for bipartisanship but as an excuse to turn a blind eye to blatant bigotry—democracy will continue to erode while the Senate will pristinely preserve a partisan procedure.

However, there are other methods of securing voting rights in light of the failures of Sinema and Manchin to protect voters. Professor Van Houweling explains that “while fighting voter suppression federally is more advantageous, there might be some effective strategies at the state level, like ballot initiatives and referenda.” Namely, he pointed to the successful 2018 Voting Rights Restoration for Felons Initiative in Florida, where voters, on the same ballot which elected proponents of voting restrictions like Republicans Governor Ron DeSantis and Senator Rick Scott, voted by 64.55% to restore voting rights to felons after they complete all terms of their sentence. The vote in Florida proves that even in the closest, most politically divided states, popular action can be taken to preserve, protect, and defend the right to vote for minority voters, just as they were for felons. If action is not taken at the federal level, it is on us, the people, to enact change.

It is crucial that we further reframe the discussion around voting rights to include the judicial system, which at times has notably both protected and gutted voting rights for racial minorities. While voting rights are often discussed in the context of legislation or politics, it is vital that we begin to understand voting rights as a matter of the law. Section 5 of the Voting Rights Act of 1965 required certain states or localities with a history of voter discrim­in­a­tion to submit proposed changes in voting proced­ures to the U.S. Depart­ment of Justice or a federal district court in D.C. for pre-approval to make sure that the changes would not discriminate against minor­ity voters. But on June 25, 2013, the Supreme Court ruled in Shelby County v. Holder that the cover­age formula of Section 4(b) of the Voting Rights Act, which calculates which states and localities should be covered by Section 5, was uncon­sti­tu­tional, gutting the Voting Rights Act and rendering Section 5 unconstitutional until further action from Congress. Thus, it is dangerous to frame the courts as an institution completely detached from public life and its impacts. The sanctity of the Court must not impede on the stark reality that the Supreme Court has affected legislation in ways more permanent, broad, and swift than Congress. In the long-term, we must also reorient our views of  the judiciary to frame the courts as an important guardian of or antagonist to voting rights, and stress the significance of judicial nominations and elections nationwide as a matter of voting rights, among other issues like abortion or religious rights.

Whatever the solution to protecting voting rights, it is abundantly clear that it is essential to our futures to protect the millions of voters of color who have turned out in masses to preserve American democracy. Since such a feat is facing staunch opposition from Republicans, Democratic elected officials must urgently act, even along partisan lines if necessary, to serve voters who have long salvaged their personal electoral prospects.