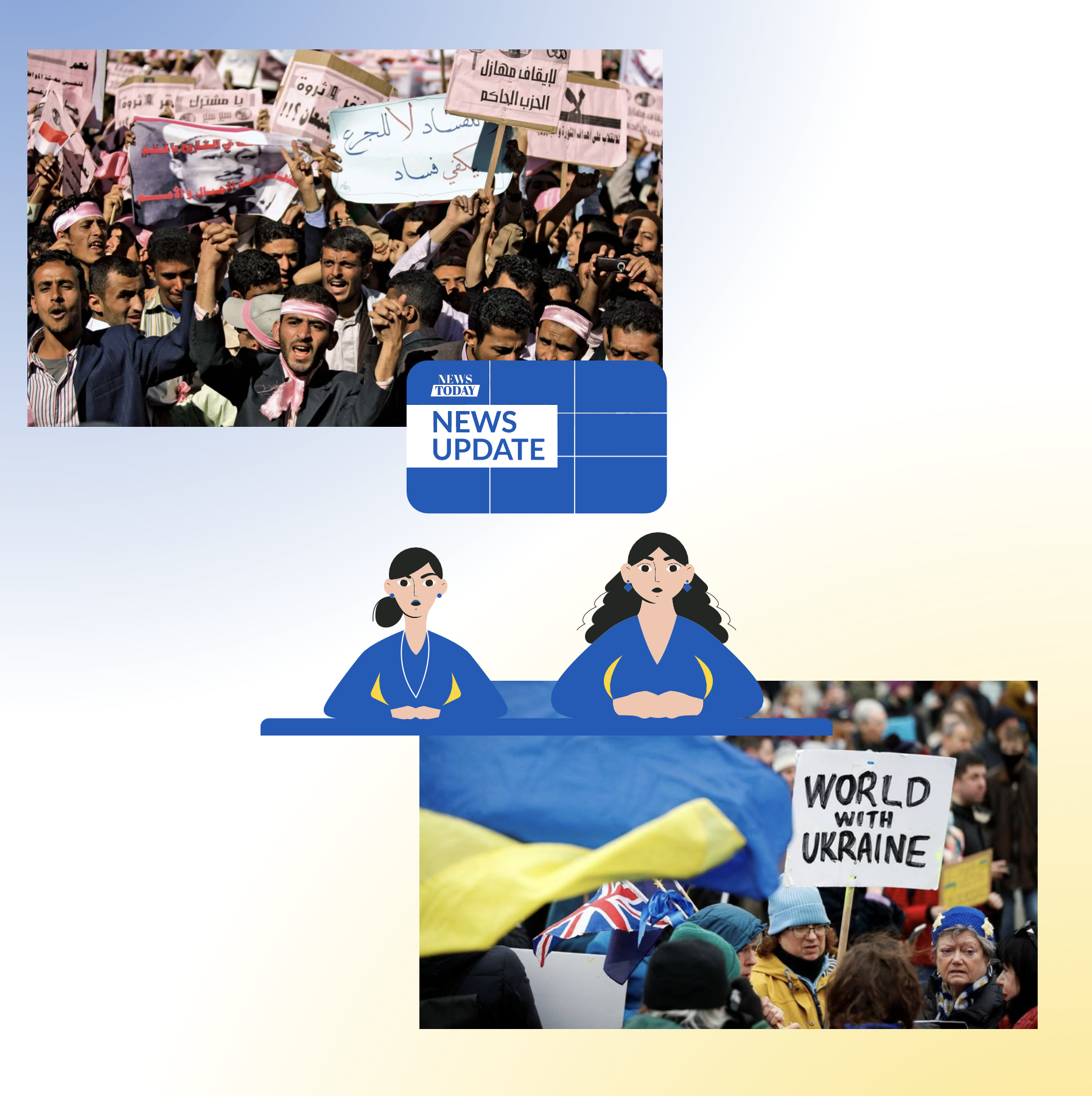 As Ukrainians continue to be forced out of their homes, lose loved ones, and are scared for the future, countries around the world have rallied their support. Still, news of wars and refugees isn’t new, and when asked what makes this situation different, reporters have shamelessly stated that Ukraine is a “white” and “Christian” country. Journalists continue to make these remarks without consequences, which brings up the question: is there a code of conduct journalists are supposed to follow? Additionally, how long has such hypocrisy in the coverage of conflict existed?

Ukraine attempted to join NATO in January of 2022 to establish its sovereignty and protect against a Russian invasion. This desire to join the alliance led to heightened tensions between Russia and Ukraine. Consequently, on February 24, 2022, Russia officially invaded Ukraine. This led to more pleas from Ukraine to be given entry into NATO as their combined forces cannot stop Russia. Yet, Russia’s advanced nuclear and military system caused NATO to continue to decline in membership in Ukraine to avoid a nuclear war.

Though surrounding nations didn’t militarily join the war effort due to similar fears, they have done all they can to show support for Ukraine. Switzerland infamously joined the NATO nations in sanctioning Russia, after 500 years of remaining neutral. Some bans implemented since the invasion includes but are not limited to:

The ongoing support from governments and civilians around the world for Ukraine has boosted morale and negatively impacted Russian troops. Within a few weeks, Russia’s economy has nearly collapsed. Moreover, as the invasion continues to last longer than expected their military strategies have become stagnant as Putin now relies solely on mass to take over Ukraine. Comparatively, Yemen is entering its 8th year of war against US-backed Saudi forces. Though Biden promised to end the Yemen war 2 years later, no new efforts have been attempted  to end “all American support for offensive operations in the war in Yemen, including relevant arms sales.”

When reporters make this comparison, they blame the American or European governments for their lack of action in predominantly “brown” or “black” countries such as the Palestinian or Rwandan genocide. Instead, comments  from reporters such as Charlie D’Agata of CBS News claimed that Ukraine is a more “civilized” country compared to countries such as Iraq and Afghanistan. Moreover, after being harshly criticized, Charlie replied, “I spoke in a way I regret, and for that I’m sorry,” he said, adding that he was trying to convey that Ukraine hasn’t seen “this scale of war” in recent years, unlike other countries.” Yet his apology was also inaccurate as Ukraine was involved in a war against Russia in 2014, when Russia used Ukraine’s political vulnerability to annex Crimea. During that time, Russia was also heavily sanctioned, causing the war to end pretty quickly, though Russia did achieve its main goal of controlling Crimea.

As this Ukrainian-Russian conflict continues to escalate, one has to point out the hypocrisies journalists have shown and question the unbiased integrity of the media.

War is Inherently European and Christian

The claim that war is common in Middle Eastern and African countries compared to Europe is false. Throughout history, there have been repeated instances of war across the European continent, some lasting over a century, such as the Hundred Years War. Most European wars were under the pretense of saving others by spreading Christianity, as seen in the Crusades, in which the Latin Church (consisting of France, Germany, and Italy) sought to “liberate” Jerusalem. Another example was the Thirty Years War, in which Protestants and Catholics fought over which religion should be the dominant power. Even in modern times, Western nations tend to be involved in multiple wars.

The most popular example would be the 2003 American invasion of Iraq based on the claim that weapons of mass destruction were in the possession of Iraq’s new president Sadam Hussein. A year later, it was proved this claim was completely false. Still, the damage was done as a political vacuum in the region was created. Nineteen years later, the war between the United States and other NATO nations versus varying local terrorist groups continues to displace millions of Iraqis, while the US continues to benefit from foreign aid sent to Iraq in 2003. Yet, some say that the increasing civil wars in the Middle East are a fair example of how war is inherently “brown.” One example would be the civil war in Syria, which started during the Arab Spring of 2011. However, this war quickly escalated into a new cold war as Russian-backed troops fought US troops. In summary, wars continue to be prevalent in the West today as they were a few centuries ago.

Comparatively, Middle Eastern and Muslim empires have continuously shown a history of religious tolerance and relatively peaceful expansion. Moreover, recent and current conflict in the Middle East continues to be a fallout from settler colonialism. One could argue that the 2003 occupation of Iraq is an example of modern colonialism. Stephennie Mulder of the University of Texas states that these Western relations, “have meant that the region has been the recipient of externally-imposed interventions that often destabilized older political landscapes, resulting in ongoing internal violence.”

White Europeans continue to claim that all people are equal in the 21st century, but recent news coverage concerning Black and Ukrainians of color shows that there is still a preconceived notion of superiority.

Examples of how the Ukrainian conflict has become an issue of race can be found at its borders. Reports of black citizens being treated as third-class citizens have continued to surface as they’re refused entry from Ukraine into bordering countries. Though black citizens have been facing the worse of the racism, it seems Slavic officials have no regard for any non-white Europeans. In early March, the Minister of Foreign Affairs of Ukraine, Dmytro Kuleba announced a hotline for African, Asian, and other international students as they struggle to leave Ukraine. Many refugees of color have been stranded at the Polish-Ukrainian border as White citizens have been allowed entry without documentation. Though there is debate about which regions’ officials won’t let them in, the multiple videos and personal statements surfing the internet show that there is a clear difference in treatment.

The denial of entry to brown and black refugees into European countries is nothing new. Perhaps the most popular example would be the refusal of entry for Syrian refugees. “The European Union started closing its borders to migrants in October 2015,” deporting refugees to Turkey as part of a $3 billion deal to reduce the number of asylum seekers. Even Russian Foreign Minister Sergei Lavrov during a press conference (in an attempt to turn light away from Russia’s horrific invasion) pointed out the double standards in the United States’ attack on Iraq  compared to their attack on Ukraine, among other countries such as Yugoslavia, Afghanistan, and Libya.

In a controversial statement, NBC News correspondent Kelly Cobiella claimed “To put it bluntly, these are not refugees from Syria, these are refugees from Ukraine… They’re Christian, they’re white, they’re very similar.” She’s right: as history has shown non-Christian refugees don’t receive the same treatment Christians do. For example, in 1992, Serbia began “ethnically cleansing” the Bosnian Muslim population, leading to thousands of refugees fleeing the country. Still, NATO did not interfere in the Bosnian genocide until the summer of 1995.

An infamous example would be Nazi Germany’s strict policies that forced Jewish emigration starting in 1933. Not only did the surrounding countries cap the amount of Jewish immigrants, they also refused to involve themselves in German domestic policies. The surrounding countries did not attack until Germany declared war on Poland on September 1st 1939, forcing its allies through the Anglo-Polish Agreement.

The Integrity of the Media

There is a code of conduct journalists are supposed to follow to maintain credibility. In this chaos, it seems reporters have neglected to  follow them. The code includes the forbidding of stereotypes or preconceived biases to appear in their work and maintaining a form of integrity. One can tell that the reports covering the war are biased- claiming white people are more civilized than people of color– because the reporters claiming so are white. Still, the code of ethics allows journalists to make mistakes as long as they apologize, something few reporters have done.

This leads to the repetitive question of whether journalists should be allowed to express their opinions in their writing. Though “journalists who shared their opinions seemed more friendly to their audience,” it is unprofessional and not allowed in multiple news outlets such as NPR. Some policies extend to journalists’ social media presence as expressed in the case of Emily Wilder from AP News. After posting pro-Palestine rhetoric on her social media, AP News claimed that was a violation of their social media policy, leading to a controversial termination.

The irony is that this same standard of enforcing integrity has not expanded to reporters such as Charlie D’Agata or Kelly Cobiella. Though CBS and NBC News, among others, issued apologies, they seem backhanded. The apologies were issued only after harsh criticism from Middle Eastern minority groups. Furthermore, the fact that multiple news organizations used  similar rhetoric shows that the lack of strict punishment allows Islamophobic and racist discourse to continue within “impartial” news organizations.

Western media’s approach to covering the Russian invasion has proved harmful to minority groups, specifically Middle Eastern groups, as hateful rhetoric was spread. Most of this rhetoric was proved to be false or biased, seen in discussions that war is not inherently European and Christian. Ukraine’s news coverage has revealed that racist and xenophobic discourse is still prevalent today. One can only hope that the massive outrage against such reporting will lead to some significant changes within news organizations concerning journalistic approaches towards covering wars involving people of color and Europeans.