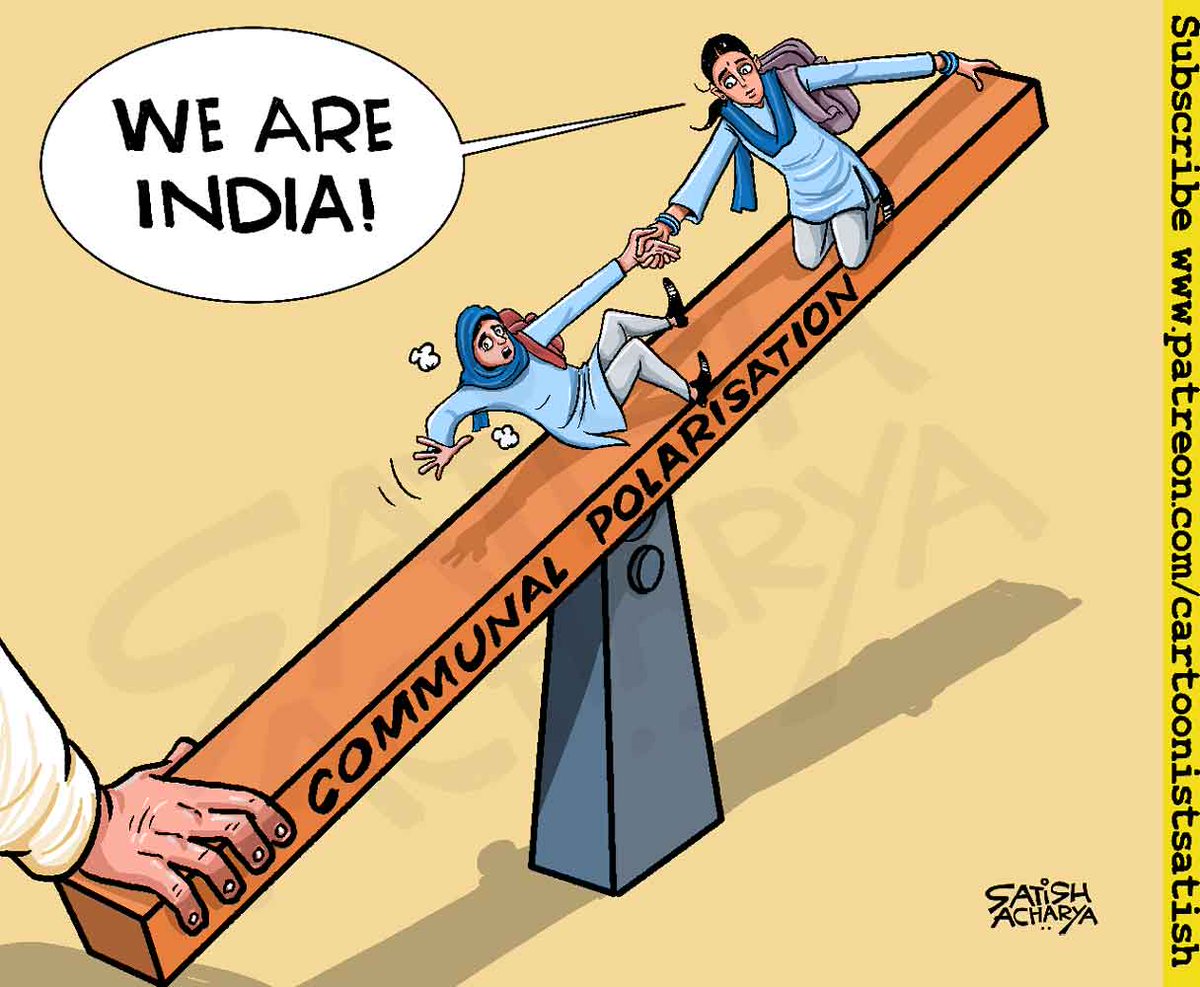 Targeted (government) harassment: The kind a Hijab can’t protect you from

The Hijab is a headscarf or veil worn by Muslim women in the presence of males, as per their religion. Open to several interpretations, some women also find wearing the Hijab liberating and a means of avoiding harassment. Because of the complexities in how the hijab is viewed, there are often violent reactions to the headgear from those outside the Islamic faith. Exemplifying this debate is the case of the Muslim girls in Udupi. Six teenage girls studying at a PU (pre-university) College for girls in Udupi (a city in the state of Karnataka, India) were forbidden from entering their classrooms for weeks on end because they wore a Hijab along with their uniform to school. Their college stated that they were allowed to wear the hijab on campus but not in the classroom.

The girls then proceeded to protest against the Hijab ban on the 31st of January after which Raghupathi Bhat, a BJP MLA (a member of the legislative assembly from the Bharatiya Janata Party) decided to hold a meeting with stakeholders and parents of the college. He reinstated that the students must follow the dress code, as stated by the college, in their classrooms. The BJP is known for making Islamophobic laws and regulations either directly, or indirectly by promoting their ‘Hindutva’ ideal. There has been increased discrimination towards the Muslim community from relatively trivial issues, like the arrest of Kashmiri students for cheering for the Pakistani Cricket team, to the latent Islamophobic sentiment in the CAA (Citizenship Amendment Act) and NRC (National Register of Citizens), both of which are Indian laws.

Background History: The Supreme Court and right to religious freedom

In the Preamble of the Indian Constitution of 1950, it is stated, “ WE, THE PEOPLE OF INDIA, having solemnly resolved to constitute India into a SOVEREIGN SOCIALIST SECULAR DEMOCRATIC REPUBLIC.” The word secular suggests a separation of religion from the state, implying that all religious beliefs are accepted and respected, and no one religion is institutionally discriminated against. This sentiment is further re-instated in Article 25 of the Constitution which “guarantees the freedom of conscience, the freedom to profess, practice and propagate religion to all citizens.” Essentially, the Constitution enumerated and declared religious freedom of several kinds as a fundamental right. In 1968, via the landmark Supreme Court decision Bijoe Emmanuel and Others v. State of Kerala, it was declared that the protection of an expression of a particular religious belief is dependent on “whether the belief is genuinely and conscientiously held as part of the profession or practice of religion.” This raises a legal question—are the actions of these six girls based on their honest beliefs and convictions as per the Islamic religion?

Several protests went back and forth along the Udupi coast and all over Karnataka. They began when girls continued to wear hijabs to college and to class. A group of boys wore a saffron scarf to college as a counter-protest. A saffron scarf is a symbol of the Hindu religion and was worn by the counter-protestors as a response to the hijab, which is a symbol of Islam. What began at one college then spread to others all across the state as more students were barred from entering classrooms for wearing a hijab, and counter protesters showed up wearing saffron scarves in Chikkaballapura, Bagalkote, Belagavi, Hassan, and Mandya, which are all cities in Karnataka. In some instances, there were reports of men being arrested for allegedly brandishing knives during a protest by Muslim students advocating for hijabs in the classroom. While the boys wearing saffron scarves yelled ‘Jai Shri Ram’ (Hail Lord Ram, a Hindu God) a girl wearing the Burqa yelled ‘Allah Akbar’ (God is great) back. The apparent divide within the country and religions, evident by the aggressive religious chants, show the sorry state of a nation more divided than united on the subject of fellow citizens’ rights. Students wearing both hijabs and saffron scarves were denied entry into classrooms. The future of this situation was sent to the Karnataka High Court, where the girls filed their writ petition, an application filed before a court requesting to issue a specific writ which is a formal order delivered by the court when a fundamental right is being violated, on the basis that wearing a hijab is protected by their fundamental right to exercise their religion.

Professor Alan Pomerantz is a practicing attorney who, in addition to his private practice for the last 15 years, taught constitutional law first at New York University for five years, and for the last ten years, taught at the University of California, Berkeley. During an interview, he analyzed the crucial elements of the ongoing case in India. When asked what he would define as a fundamental right he stated, “Fundamental rights are rights that are defined by the Supreme Court as rights that are very, very important, although no right is absolute.” He mentioned that in the United States when abridging a fundamental right, the government must pass the Strict Scrutiny Review. He also evaluated the situation in India, stating “[everything] matters in its context,” shedding light on its important role in legal proceedings when the Supreme Court is reaching a verdict; for example, the difference in consideration of the situation when moving from wearing the hijab on campus to a classroom. When considering this issue he said, “I think it’s important to balance two things: I think it’s appropriate to have a uniform requirement, there is a reason to have everybody dress the same in school, that’s why the army has a uniform. If it’s just because it makes me feel comfortable (wearing the hijab) I don’t think that’s enough. If they feel that a fundamental right of how they practice their religion is being abridged and that will adversely affect them, their souls, their bodies, whatever it is that they hold dear with regard to their religion, then I think I would give that a lot more weight.”

The Karnataka government released an order saying that students have to comply with the uniform or dress code prescribed by the college development committees. This order was supported by the Karnataka Educational Act 2013 and 2018 which allows educational institutions to prescribe uniforms for school and PU college students. The most significant response from the Karnataka government was on behalf of the Karnataka High Court, which made an interim decision on Thursday the tenth of February while the Court can deliberate on the final verdict regarding this matter, which could take months. This interim order directed students to return to classes, and “all stakeholders will not insist on wearing religious garments, that is, headdress or saffron shawl or anything” as stated by the Chief Justice. He further explained that this decision was made to maintain ‘peace and tranquillity’ in the state. Students are now forced to attend classes without their hijabs or leave the institution they are currently enrolled in, while PU colleges were given an order to begin instruction again. Students are now compelled to make an impossible decision as they choose between religion and education.

Other countries and the Hijab row

The free exercise of religion is a fundamental right valued by most nations across the globe due to its importance in the lives of individuals. Several countries have commented on the subject of minority rights and the banning of hijabs in the classroom. The United States Ambassador at large for International Religious Freedom tweeted, “Religious freedom includes the ability to choose one’s religious attire. The Indian state of Karnataka should not determine permissibility of religious clothing. Hijab bans in schools violate religious freedom and stigmatize and marginalize women and girls.” This tweet received a lot of negative feedback not only from India but also several other people who responded about the alleged hypocrisy of his statement due to Islamophobic claims and decisions made by the US government especially under Trump. Arindam Bagchi, the spokesman of India’s external affairs ministry, replied to the tweet stating, “Motivated comments on our internal issues are not welcome,” before further emphasizing that the court’s final decision is impending. Malala Yousafzai also commented on the matter by urging Indian leaders and politicians to stop marginalizing Muslim women, by highlighting the importance of minority rights. Paul Pogba, a Manchester United and French international soccer player, shared a post of the protests in India with a caption, “Hindutva mobs continue to harass Muslim girls wearing hijab to college in India.” The Hindutva sentiment he is referring to in his caption is the Hindu supremacist ideology associated with the BJP and Narendra Modi (Indian Prime Minister).

The Karnataka High Court reached a verdict on the 15th of March, 2022, upholding the ban on the hijab. The reasoning regarding this decision delivered by Chief Justice Ritu Raj Awasthi stated, “[w]e are of the considered opinion that wearing of hijab by Muslim women does not form a part of essential religious practice.” However, following this verdict the lawyer, Anas Tanvir, representing the girls has decided to challenge the Karnataka High Court decision in the Indian Supreme Court.

Protests have increased and tensions have risen over the week with more students appearing at schools wearing saffron scarves while girls wearing the hijab fight for their right to freely exercise their religion. Several girls continue to protest and fight while stating that wearing a hijab is essential to them and their daily life. The verdict by the Karnataka High Court has also now been labelled as a decision that ‘judicially sanctions apartheid.’ This was stated by an activist, Afreen Fatima who found the judgment to be “very disturbing.” This verdict begs two important questions, the first being who is to determine and how can it be determined whether or not wearing the hijab is essential to the Islamic religion and these girls? The second is whether or not the Karnataka High Court has the authority to limit the way in which these girls exercise their religion.

India claims to be a secular nation, a nation where no one belief is respected more than the other and where no religion is deemed superior to another. Yet under the rule of the BJP and their Hindutva ideology, India does not exist as just one secular nation but rather as two. On one hand, Muslims fight for their rights while on the other, the Hindus fight against their plea, instead of supporting their fight to freely exercise their respective religions. India now exists as a nation where people are fighting for rights, both parties involved should possess, because one feels threatened by the other. Now that the Karnataka High Court upheld the Karnataka Educational Acts of 2013 and 2018, there remains only one question: what will the Indian Supreme Court decide?

Wearing the hijab/burqa or saffron scarf shouldn’t be seen as an aggressive threat from one religion to the other, but rather as a celebration of each one’s faith and should be permitted in a classroom. This issue is not a political one. It isn’t a partisanship issue with BJP on one side and Congress on the other. It’s a human rights issue, and should be treated as one. No student should have to feel discriminated against on the basis of their religion, and no student should have to choose between their religion and education.