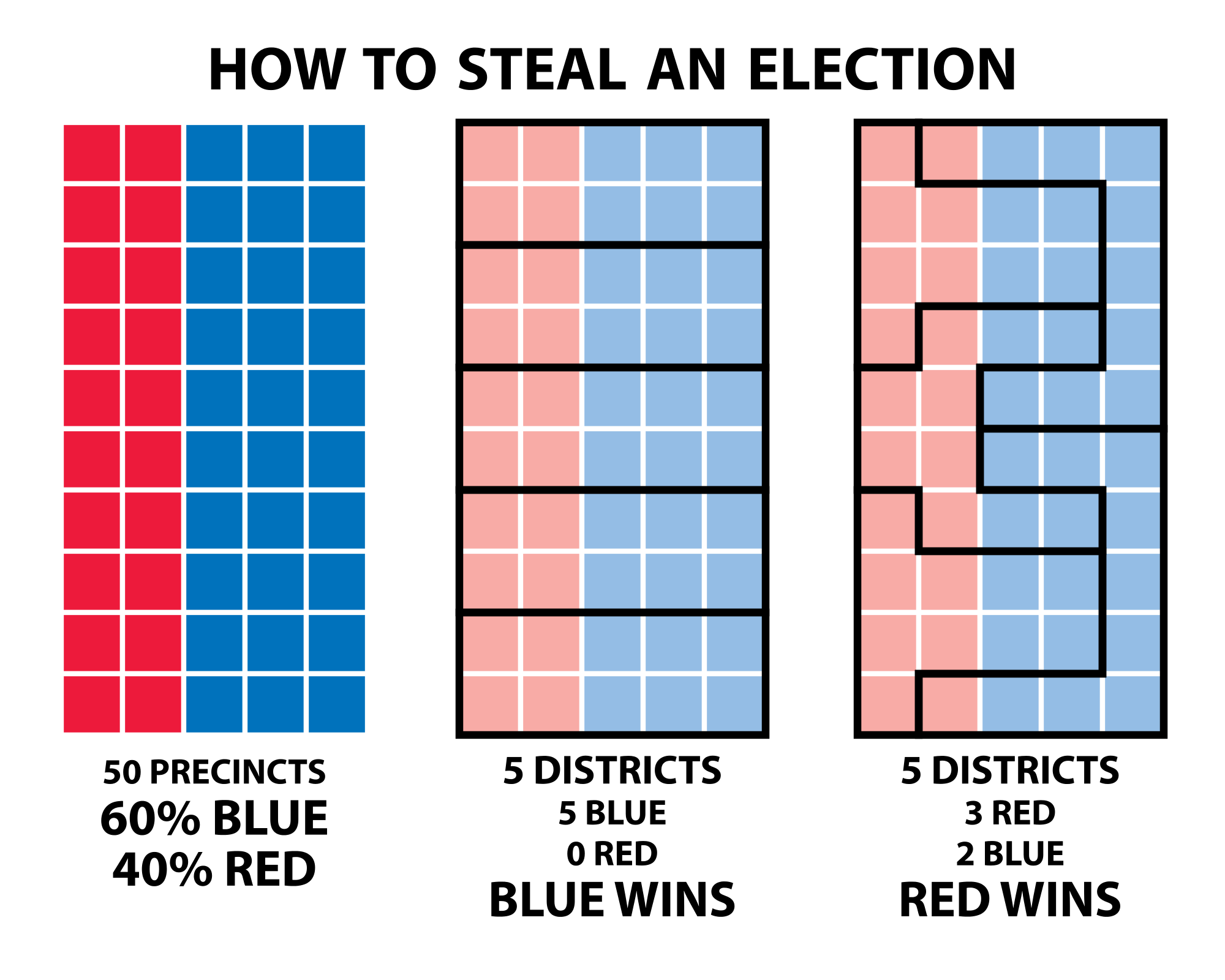 Should Democrats Gerrymander in Blue States?

Kevin McCarthy holding the Speaker’s Gavel on January 20, 2023, would be an unprecedented threat to American democracy. If Republicans reclaim control of the House next January, the investigation into the insurrection attempt on the United States Capitol will end and nonsense impeachment proceedings of President Biden could begin.

Often, elections can be won and lost before voters head to the polls. How districts are drawn is incredibly important. Therefore, congressional redistricting is re-entering the national conversation as all states draw new congressional maps based on information from the U.S. 2020 census.

Every 10 years the United States Census, conducted by the U.S Census Bureau, attempts to “facilitate informed decisions” about the “nation’s economy, society, and institutions.” In the midst of extraordinary challenges, the Census Bureau staff has completed the 2020 Census. Prescribed in the Constitution, the Census provides for the apportionment of seats in the House to each respective state in the union.

Now the attention turns to the states to draw new congressional districts for the next decade. In some states, state legislatures draw redistricting maps while others, like California, have passed laws to establish independent redistricting commissions. In 2010, Californians approved Proposition 20, an amendment to the State Constitution that gave the California Independent Redistricting Commission the power to draw congressional districts every ten years. Many states around the nation are considering similar propositions to limit the power of the state legislature in redrawing maps. What does this mean for the 2022 midterm elections?

The party of the President in power usually loses seats in the midterm elections. In fact, every president since FDR except George W. Bush has lost House seats in their first midterm election. Moreover, when looking at recent poll numbers, Biden looks on track to do the same. This article won’t examine why Biden’s poll numbers are struggling; I will accept the fact that Democrats will lose seats in the house and possibly lose the speakership. If gerrymandering across the nation works in Republicans’ favor, the scary realization is they won’t have to convince any new voters of their political agenda— just hold on to voters already in their camp.

Democrats should continue to push for legislation at the federal level to ban partisan gerrymandering, but they must redraw congressional maps to their advantage in states where they hold power. The establishment of redistricting commissions in blue states like California and Colorado puts Democrats at an extreme political disadvantage. A Kevin McCarthy speakership would be truly terrifying; his rise to power would mean possible impeachment proceedings for President Biden and a refusal to certify the 2024 presidential election. If Democrats care about the future of democracy in the United States, they cannot continue to support state constitutional amendments in blue states that shift redistricting power to independent commissions. It’s political suicide– Republicans will let Democrats fall on their own blade.

Let’s take a look at California and two other states where Democrats control all levers of power (both legislative chambers and the governorship). Before the establishment of independent redistricting commissions, control of the state legislature and the governor’s mansion meant the party in power controlled the redistricting process and could create districts to their partisan advantage. All three states examined here have independent redistricting commissions, and the State Constitutional Amendments in California and Colorado are pretty bulletproof to partisan inference. However, New York’s law allows the state legislature to bypass the commission which has allowed Democrats to implement a partisan gerrymander that could help offset Republican gerrymandering in other states.

On December 27, 2021, the California Citizens Redistricting Commission, comprised of five Democrats, five Republicans, and four Independents, released their completed maps that will govern congressional and state legislative redistricting in California for the next decade. The maps are far from perfect but represent a nonpartisan redistricting success story. In fact, according to the political data site 538, the efficiency gap of California’s congressional districting, a metric used to compare which party “wastes” more votes (votes in a district where a particular party loses or wins by many more votes than its needs), is just 5.3%, much lower than many traditionally “purple” states like North Carolina.

California’s maps are now fairer. They represent the will of the people more accurately and give each party a good chance to win a proportional amount of seats when compared to their total vote share. Additionally, the maps increase Latino representation; 22 of the 80 new state assembly districts have a voting age majority of Latinos. The commission also allowed for public feedback on the maps, a key step to engage more voters in the political process. California can serve as a model for other states; activists can use California as an example when advocating for redistricting commissions.

However, Democrats did not create a map more favorable to them politically. Because of Proposition 20, Democrats were at the mercy of the redistricting commission. If Democrats lose the House in 2022, many Democrats will look at California as a missed opportunity.

Let’s turn now to Colorado. Colorado has turned blue in recent years; President Biden won the Centennial State by 14 points in 2020. However, it is historically more of a purple state– Coloradans voted for George W. Bush in both his Presidential runs. The most important thing to know about Colorado politics is that, in 2018, Democrats gained full control of the state government for the first time since 1936. In 2020, Democrats should have had the chance to redraw congressional maps to their advantage. There was just one problem. In 2018, with Democratic Party leaders and liberal activist groups’ support, Colorado voters passed Amendment Y, establishing an independent redistricting commission. The newly approved map from the redistricting commission sets up four likely Democratic seats, three Republican seats, and one swing seat. In other words, it serves a similar function to the new California map– generally making the districts more competitive.

Maybe this is Democrats being principled. However, some Colorado Democrats are upset that Amendment Y prevents Democrats from drawing maps that would benefit them politically. One Democratic state lawmaker in Colorado, who chose to remain anonymous, told the Colorado Sun, “we’re f***ing idiots.”

Colorado Democrats could have grabbed an extra seat or two and used redistricting as an opportunity to hamper the hyper-inflammatory Trump disciple Lauren Bobert’s re-election hopes. Instead, Colorado’s congressional delegation will maintain an even partisan split and Coloradans are stuck with Bobert for two more years.

New York provides a template for Democrats who want to fight fire with fire. In New York, Democrats are taking advantage of a weak redistricting commission law, pushing through new maps that will likely eliminate three Republican House seats in the Empire State. The new map will allow Democrats to control about 77% of seats in a state where President Biden won 61% of the vote. Republicans are furious, but it seems like they are crying wolf as these same Republicans have refused to support House Resolution One (H.R. 1), a bill that would eliminate partisan gerrymandering.

The Future of Redistricting

The New York and Colorado case call into question whether Democrats should support a proposition to repeal Prop 20. Such a proposition would be unlikely to affect redistricting for this decade as it would likely take effect in 2030. If Democrats nationally don’t have control of the speakership for multiple election cycles, expect pressure to be applied to state lawmakers in blue California to support the repeal of Prop 20. The public support to overturn Prop 20 is hard to estimate, but liberal voters in Democratic strongholds like San Francisco and Los Angeles will be upset if Democrats continue to struggle nationally.

Democrats in the House are stepping up to end deeply undemocratic gerrymandering. House members have proposed legislation to virtually eliminate gerrymandering. House Resolution One, or H.R. 1, would require states to use independent redistricting commissions similar to the one in California. Citizens could challenge gerrymandered maps in courts using H.R 1, and the law provides an opportunity for the public to review maps and give feedback to the newly established commissions. The law also establishes an automatic voter registration system and would require so-called “super PACs” to disclose their donors–both democratic priorities. H.R. 1 passed the House in March but has stalled in the Senate. If you read your share of political news, I’ll probably sound like a broken record. Without filibuster reform and the support of Senators Manchin and Sinema, the bill will not pass the Senate. Democrats simply don’t have sixty votes to get rid of a procedure that benefits Republicans more than Democrats.

Until a day comes when H.R 1 can pass, Democrats have a moral quandary on their hands. Independent redistricting commissions are great for democracy; they draw fairer and more representative maps. However, Republicans taking back the house will lead to the destruction of democracy in the United States. Will Democrats continue to support independent redistricting commissions? Or will they fight fire with fire during a political era that demands hardball politics to keep up with Republican gerrymandering? Their answer could spell their demise. One thing is for sure— Donald Trump and Republicans will fight tooth and nail to win back Congress and the White House. Moreover, with the aid of partisan gerrymandering and a deeply undemocratic Senate, they can do so without changing the mind of a single voter. If that’s not a reason to fight, what is?