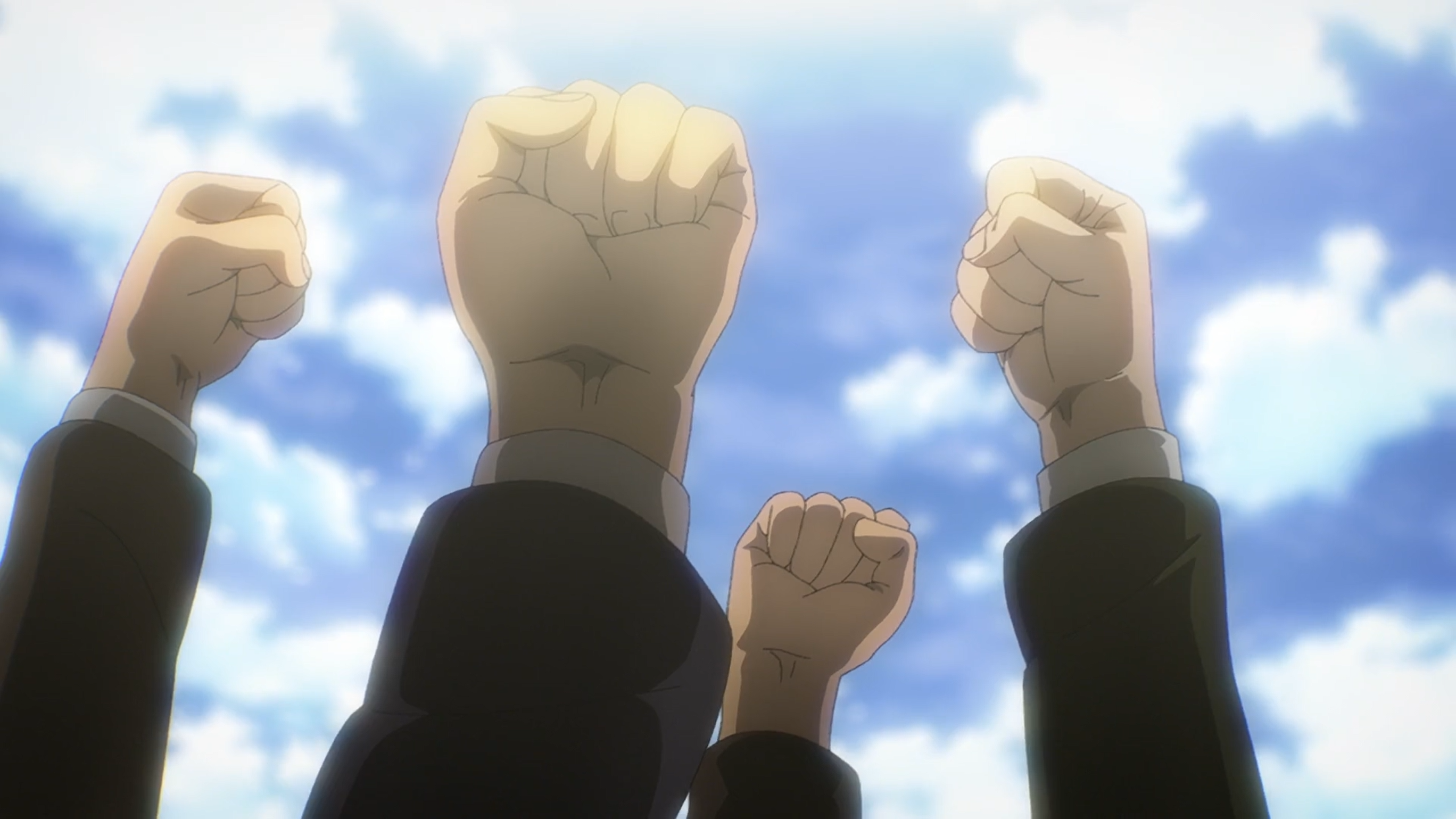 Beyond Wall Four: Attack on Titan’s Condemnation of Fascism is Woefully Misunderstood

This article contains spoilers for the anime adaptation of Attack on Titan up to Season 4 Episode 22. Some sources may link to external sites that contain spoilers for the manga and/or anime episodes that have not yet aired.

In November of 2021, Representative Paul Gosar (R⁠–⁠AZ) tweeted out a truly baffling video in which an animated caricature of himself violently attacked renditions of Democrats Joe Biden and Alexandria Ocasio-Cortez. The House in turn reprimanded Gosar by congressionally censuring him.

The video itself was an edit of Attack on Titan, one of the most popular ongoing anime. The show has previously garnered controversy for its supposed fascist subtext. With that in mind, it seems easy to understand why Gosar described himself as a “fan” of the show’s themes.

But the notion that Attack on Titan promotes fascism is false. Gosar, and thousands of others, have severely misunderstood its most prominent political messages. Attack on Titan depicts in stark reality how fascism festers. The fact that many fans support ideologies antithetical to the show’s moral structure demonstrates the dangerous allure of fascism—and strengthens the show’s warning against it.

Attack on Titan tells a story of an intrepid military force in a post-apocalyptic world. Three concentric stone walls are all that separate civilization from the monstrous “titans” that now roam the earth.

The second season premiered in the spring of 2017, and its opening theme, “Shinzou wo Sasageyo,” quickly became iconic. The song’s soaring chorus repeated this phrase: “shinzou wo sasageyo,” which translates to “dedicate your hearts.” Characters in-universe repeated this command over and over, imploring struggling soldiers to push themselves forward in hopes of a brighter future. Yet it became a rallying cry among fans as well: a clasped fist over one’s heart served as an informal salute to demonstrate one’s affinity with the show.

On YouTube, the official video has amassed over 24 million views. It’s one of the most viewed anime openings of all time, owing not only to its melody but its message. The top comment, with over 89 thousand likes, puts it simply.

“This song has me feeling patriotic for a nation that doesn’t exist.”

This statement seems perfectly innocuous—even somewhat justified. The heroes of Attack on Titan persevere, loss after bloody loss, in order to protect themselves and the rest of humanity. Whose heart wouldn’t feel a pang of sympathy for such an admirable cause?

In the third season, the audience’s understanding of the setting was radically upended. Humankind had not perished. In fact, it was thriving. Every character we had met so far was a resident of “Eldia,” an island that had been subjected to a mass memory wipe. The Eldian Empire, a genocidal nation-state, was vanquished centuries ago. Now, Eldians as a class were oppressed on a global scale; those not imprisoned on the titan-infested island lived in ghettos, segregated from society, victims of discrimination and hate crimes.

This knowledge was as shocking to the characters of the setting as it is to fans. A conflict of man versus nature was suddenly transformed into one of man versus man. In an instant, a people who had only known themselves to be “humanity” became “the nation of Eldia.” The characters of the show were not the remnants of humanity. They were the enemies of it. They were now, above anything else, Eldians.

The third season of Attack on Titan ends with this revelation, as protagonist Eren Yeager stares across the ocean toward enemy nations beyond the horizon.

The fourth season begins with Yeager slaughtering tens of thousands of civilians overseas—an unambiguous war crime. It is now five years in the future, and the nation of Eldia is declaring war.

The supporting cast that we have grown to know are horrified by Yeager’s actions. It was not long ago that they themselves were the victims of horrifying violence—now, they sit shoulder to shoulder with its perpetrator.

But Yeager’s actions are popular with a growing faction of Eldians. They are discouraged by the Royal government’s pacifism. They wish for nothing less than revenge on all those who have oppressed their brothers and sisters.

Eren Yeager is imprisoned for his actions upon returning to the island. In retaliation, the Yeagerists detonate a bomb and successfully assassinate the Eldian general. Afterwards, a mob of Eldians celebrate the act of political terrorism.

“Our anger has reached them!” one cheers.

“Let us bring victory to the New Eldian Empire!” another declares.

And in a rippling wave, a chant breaks through the assembled crowd. One by one, they each pump a balled fist in the sky and lift the other to cover their hearts.

“Shinzou wo sasageyo!” they cry out in unison, with the smoldering remains of the military palace—and of the old Eldian government—fading into the wind.

This is great television. But is it an example of fascism?

Jason Stanley, a Professor of Philosophy at Yale and a noted writer in the field of identifying fascism, would say yes. In an interview with Vox, Stanley outlined three main trends of fascist belief: constructing an in-group, nationalistic myth-making, and uplifting power over truth.

The Yeagerists embody all three characteristics. They see themselves as Eldians (a classification, mind you, that half a decade ago did not exist), and thus the rest of the world is constructed as their out-group. They are spurred on by fervent recollections of a history that was stolen from them, when the old Eldian Empire harnessed the power of the titans to rule the earth.

Stanley says that the story of fascism is consistent: “a once-great society has been destroyed… [and] the dominant group feel[s] angry and resentful about the loss of their status and power.” In Attack on Titan, this story somewhat aligns with Eldian history. Eldians’ status and power was stolen from them, and their society and their memory of it was destroyed.

But that is not the whole truth.  Despite this, attempts to reason with the Yeagerists in-universe fail miserably. The truth, in fiction or in reality, is muddied and stained with grays. The myth is both beautiful and powerful.

What’s more, the myth is backed up by power itself. At this point, Eren Yeager is the most powerful human being alive, and he aims to slaughter the rest of the earth, leaving only Eldia intact. That this would result in the deaths of billions does not deter him.

It was around this time, when Yeager’s ultimate intentions became clear in the manga, where a subgroup of fans began to emerge. The story itself clearly opposed Yeager’s stance. But these fans, whose feelings toward Yeager’s cause ranged from sympathetic to fanatic, agreed—the man who wished for global genocide was in the right. They happily adopted the moniker of “Yeagerists” for their own online faction.

These online zealots multiplied exponentially. In the months following the general’s murder in the manga, “Titanfolk,” a pro-Yeagerist splinter subreddit, nearly doubled in size. An even more pro-genocide subreddit, “Yeagerbomb,” gained over ten thousand members in a third of a year.

Fans who flocked to Yeagerist groups in large part did not do so ironically. A pervasive culture of memes, “shitposts,” and oftentimes vicious mockery helped deflect any criticism. But make no mistake: stripped of the veneer of humor, they were very, very serious in their adherence to a core set of beliefs. Eren Yeager was God (a.k.a. “Chad”). All who opposed him were blasphemous (or “cringe”).

Yeager’s actions are condemned in-universe. So how could so many fans come away with the conclusion that genocide is not only correct but cool? Sure, you can pin this on declining media literacy, or run-of-the-mill villain worship, but that’s ignoring the titan-sized elephant in the room.

Attack on Titan did not begin as a political drama. The early story didn’t have much of a political message at all. Vague anti-war sentiment sometimes bled through, but the focus of the show never significantly wavered: humans are the good guys, titans are the bad guys. The characters were compelling and the action was explosive, and that sufficed.

So Attack on Titan drew in viewers who might not necessarily be used to consciously engaging with politics in their anime. The show was initially just well-drawn fight scenes wrapped in a serviceable plot. The reveal of the world beyond the walls was what elevated Attack on Titan to a masterpiece, but the ensuing rapid thematic metamorphosis also blindsided a fanbase that was not prepared for themes deeper than “violence is sometimes bad.”

It is unsurprising, then, that support for Yeager gained such prominent ground in the fandom. Fascism is a disease that spreads when no one is watching—or in this case, when everyone is watching, but far too few are paying attention. There is an intrinsic appeal to the Yeagerist mythos. It is a simple, glorious lie where power reigns supreme.

And so Attack on Titan proved itself correct. The show’s depiction of the siren song of fascism drew in supporters from across the metanarrative boundary. What better proof of fascism’s pull than by extending it into real life?

Online radicalization is an exigent issue in modern society, and, ultimately, denizens of the internet declaring themselves to be Eldian Restorationists ranks as a relatively small issue. But it is a symptom of a wider illness: the capacity to blindly hate and to eagerly follow that we repeatedly see drawn out to the surface of the human psyche.

Attack on Titan is not an endorsement of fascism. It is a warning. We would all be wise to take heed.

Ryan is the Deputy Editor of the Opinion section. He enjoys writing and not-writing, the two universal categorizations for activities. Follow me on twitter (@ryanliuofficial). Yes, I'm speaking in first person now. Deal with it.