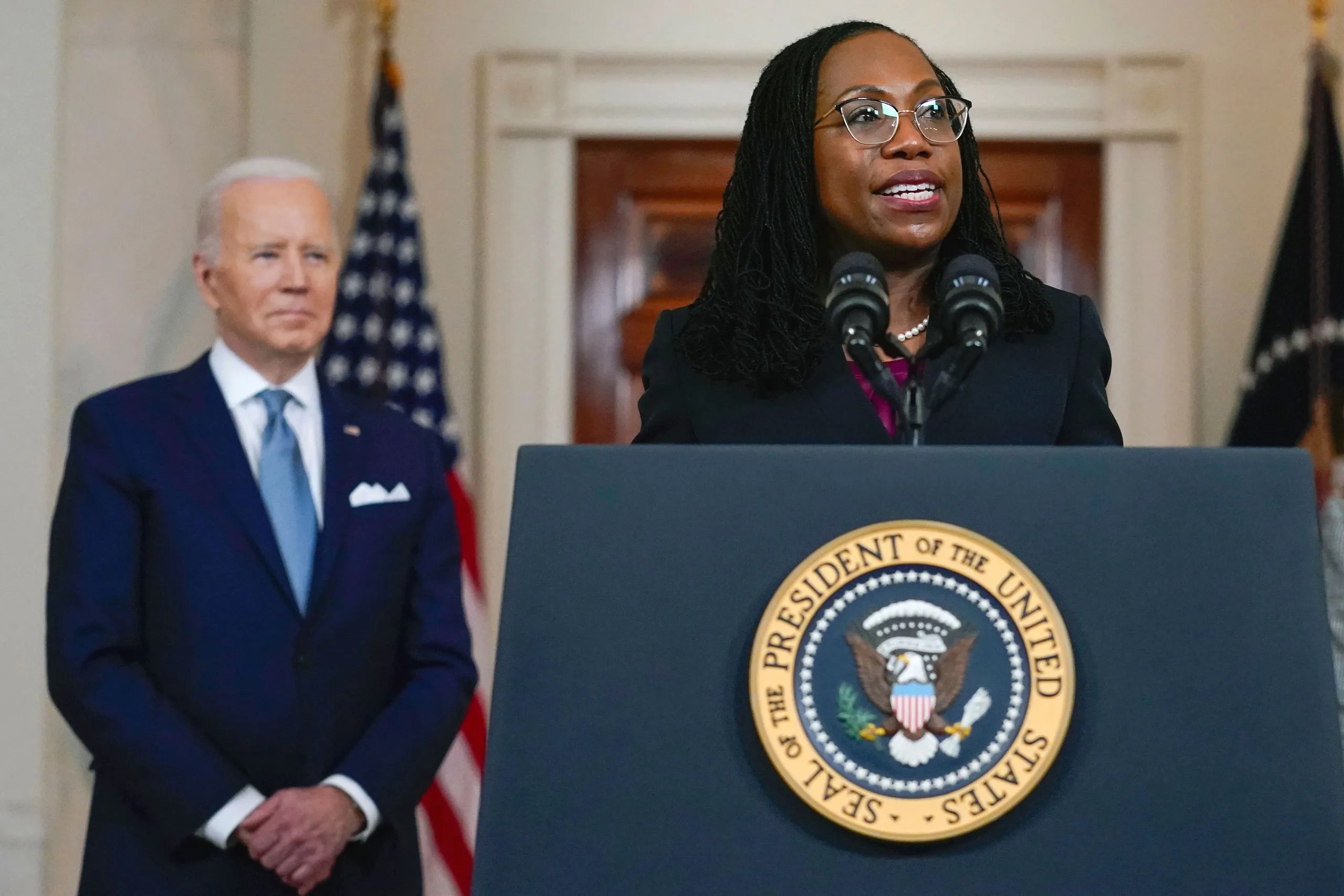 30 Years After Anita Hill, the Senate Must Now Confirm Ketanji Brown Jackson To The Supreme Court

Thirty years ago, bright lights and bustling press concentrated on the testimony of Professor Anita Hill— the brave former colleague of then-Judge Clarence Thomas— as she shared her story of sexual harassment with the world. Prior to Hill’s testimony, Thomas, nominated by President George H.W. Bush for the Supreme Court, was noted for his commendable character and morality. When Hill took to the Senate to describe how Thomas sexually harassed her during their time working together in the Equal Employment and Opportunity Commission, the Senate exploded as the epicenter of national attention. Despite her testimony, Thomas was confirmed to the highest Court in the nation while Hill was degraded and dismissed by the then all-white male Senate judiciary committee, chaired by Senator Joe Biden of Delaware. Now, however, with his nomination of Judge Ketanji Brown Jackson to the Supreme Court, President Biden has the chance to shepherd the first Black woman to the institution that was used to unrightfully humiliate a Black woman three decades ago.

After describing the specific instances of sexual harassment that she faced, Hill faced abhorrently absurd attempts from Senators on the judiciary committee to delegitimize her story’s veracity. Republican Senator Howell Heflin of Alabama infamously questioned the basis of Hill’s testimony by asking her, “Are you a scorned woman?” Republican Senator Arlen Specter claimed that Thomas’s most egregiously inappropriate offense was discussing “women’s large breasts” in the workplace, which Specter characterized as “not too bad.” As the committee chair, rather than quelling the chaos of the confirmation process, Senator Biden asked questions that fed into the detestable treatment of Hill. Charles Ogletree, a professor at Harvard Law who served as Hill’s attorney during the confirmation hearings, explained to Politico that “Joe Biden was asking questions that didn’t seem appropriate and was not in [Hill’s] corner” and that Biden’s “questions to Anita Hill were as piercing as anyone’s.” In 2019, on ABC’s The View, Biden expressed that he was “sorry for the way [Hill] got treated,” but added that he does not believe that he “treated her badly.”

Since Thomas’s confirmation, there has been a notable improvement in the diversity of the Senate and other institutions. America has seen the election of two Black women to the Senate, first with  Carol Moseley Braun (D-IL) in 1992. The second, Kamala Harris (D-CA) in 2016, would go on to be the first woman and woman of color to be Vice President. Even the Supreme Court itself witnessed the appointment of Sonia Sotomayor, the first and currently only woman of color confirmed to the Court.

With such immense progress, one might naturally believe that the confirmation of the tremendously qualified Judge Ketanji Brown Jackson will proceed swiftly and in a dignified manner. After all, Jackson has a Harvard pedigree, has earned bipartisan support in her past Senate confirmation to the prestigious Court of Appeals for the DC Circuit and has nothing less than a flawless personal ethic as a mother of two and former public defender. But this process has already become ugly. Undoubtedly, the topic of the Supreme Court will evoke partisan divide in the Senate and grant a platform for Republicans to flex their staunch conservatism and theatrically artificial reverence for the Constitution. However, the criticisms of Jackson from Republican senators and mainstream alt-right media extend far beyond the normal partisan divide. Many of her most vehement detractors are now using the same forms of prejudicial questioning as those that have long been spewed to degrade the success, legitimacy and accomplishments of Black women like Anita Hill.

It is important to take stock of the unacceptable rhetoric that has been put forth by members of the very institution responsible for confirming Jackson to the Court: the Senate. Despite Jackson’s extensive qualifications and résumé, Republicans have turned to racist tropes to convey their dissatisfaction with her nomination. Senate Minority Leader Mitch McConnell complained that Judge Jackson is a “favorite of these fringe groups” of “radicals.” Senator Lindsey Graham expressed his illogical concern by tweeting that Jackson’s nomination to the Court signifies that “the radical Left has won President Biden over yet again,” despite voting to confirm Judge Jackson to her current position on the DC Circuit Court just last year.

Racism is driven by othering: the ostracization of one group of people in order to subjugate them, to paint them as abnormal, different, radical. African Americans in particular have faced such dehumanization throughout all of American history. Even if Republican Senators genuinely mean to criticize her ideology rather than weaponize Jackson’s race against her success, McConnell and Graham ought to be more careful in their attacks on Jackson, given the plagued historical context of the ostracization of African Americans in our nation.

Beyond the racially motivated attacks on Judge Jackson, Black Americans, as recently as the 2020 election, have been repeatedly othered by our highest ranking government officials. In 2020, President Donald Trump referred to Kamala Harris, then the only Black woman in the Senate and the first to be nominated for vice president by a major party, as “this monster.” Furthermore, Trump demanded that Black Congresswomen Ilhan Omar and Ayanna Pressley “go back” to the countries they came from, called Black Congresswoman Maxine Waters a “low-IQ individual” and even insulted his own former White House staffer Omarosa Manigault Newman, also a Black woman, by calling her a “dog” and a “crazed, crying lowlife.” In fact, referring to any Black political opponents as mentally unfit or crazy seems to be a standard practice out of the modern GOP playbook. Former Republican Senator Kelly Loeffler called her Black opponent, the senior pastor of Martin Luther King Jr.’s former congregation, a “radical liberal” thirteen times during a debate. We are now clearly witnessing the same base attempts to paint African Americans as ‘radical’ being weaponized by Republicans against Judge Jackson. Although much progress has been made for and by Black women since Hill’s testimony in 1991, these racially motivated attacks on Jackson show that the Senate and the Republican caucus still have much more ground to cover before touting that we have achieved a harmonious post-racial society.

In addition to the attempts from within the Senate to delegitimize Judge Jackson, right-wing media has turned to insincerely questioning her qualifications to serve on the Supreme Court. As if Jackson’s achievements in the law do not qualify her to serve on the Court, Jackson recently was subject to a racist attack from Fox News host Tucker Carlson, who has been accused by the Anti-Defamation League of spewing an “open-ended endorsement of white supremacist ideology.” Carlson demanded that it is “time for Joe Biden to let us know what Ketanji Brown Jackson’s LSAT score was.” To be clear, the LSAT is a law school admission test which is designed to, as described by the Law School Admission Council, “test the skills necessary for success in the first year of law school,” and thus is completely irrelevant to one’s legal scholarship and qualifications for the Supreme Court. Where was Carlson’s irritatingly passionate demand to see the LSAT scores of Justice Gorsuch, Kavanaugh, or Barrett? Does Jackson graduating magna cum laude from Harvard, attending Harvard Law, serving on the second most prestigious federal court and garnering bipartisan praise not suffice for him?

But we know exactly what Carlson meant: he was perpetuating the age-old racist practice of moving the finish line, creating new, absurd standards for exceptionality or success once African Americans, against the odds and plethora of systemic prejudices, achieve excellence. Such practices are littered throughout American history in the implementation of literacy tests and poll taxes once African Americans achieved the legal right to vote or the use of runoff elections to deter the election of African Americans even when they win a plurality of the vote. As tempting as it is to view our accomplishments today as proof that anti-Black racism is an isolated relic of the past, it is an injustice to pretend that this is the reality. Tucker Carlson’s attacks prove that we, as Americans, still have much more to examine. We should be deeply troubled about why it is not a national, career-ending offense to spew racist rhetoric on national television.

However, things still have changed since Anita Hill testified. While increased diversity in the Senate may not indicate the end of racism, it is a massive improvement from the over 90% white male composition of 1991. President Biden and Judge Jackson have already made history and taken great strides toward achieving an overdue “first.” But now, Democrats have an opportunity. They can either vociferously renounce racially offensive attacks from Senate Republicans and mainstream alt-right media like Fox News, or they can allow Republicans to corrupt the historic appointment of the first Black woman to the Supreme Court. The choice is theirs.