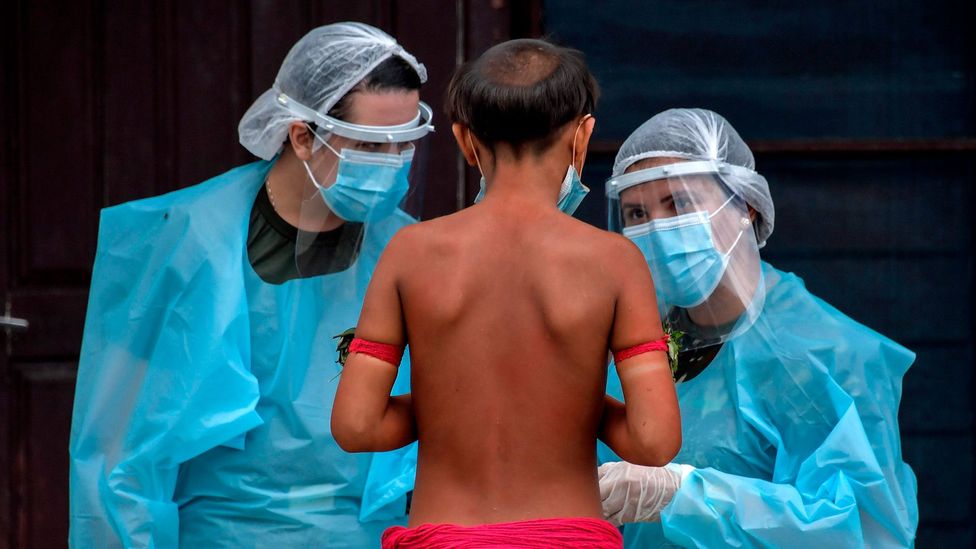 How COVID-19 Illuminated Racism in Australia

COVID-19 took everyone by surprise, with its wildfire spread and infection rates. While not particularly deadly in and of itself, COVID-19 can worsen the effects of preexisting conditions and cause complications that lead to death. Around the world, indigenous communities lacked the resources to prevent the spread of COVID-19 to their communities. The disparities caused by COVID-19 are nowhere more apparent than in Australia, where it highlighted centuries-long tensions between the Aboriginal population and the Australian government.

Wilcannia, Australia, is one such example. Wilcannia is located in the state of New South Wales in inland Australia and has a population of 600 people, 90% of whom are aboriginal. Because of its remote inland location, Wilcannia and its residents did not experience the first wave of COVID-19. However, they were not immune to the second wave. In two weeks, 25% of Wilcannia became infected with COVID-19, which was one of the worst infection rates in Australia at the time.

The fragile situation of indigenous communities in Australia should have made them a priority to protect by the government. They are located in the most remote areas of Australia; they have the highest rate of pre-existing conditions amongst Australians, and they have a different lifestyle than most white Australians that made them more susceptible to contracting COVID-19.

The most important factor the government should have considered in planning for its COVID-19 response was the distance and access for aboriginal populations. Most aboriginal Australians live in the center of Australia, away from the coast. The majority of white Australians live in the biggest cities along the coast. The interior of Australia is extremely remote, flat, and arid. It is sparsely populated, with a population density of around 1 person per square kilometer. Medical attention, besides basic treatment, takes hours to arrive. In Wilcannia, the closest intensive care unit is 125 miles away. Access to ventilators, personal protective equipment, and medical experts is essentially nonexistent. Given that these are especially valuable tools required to combat COVID-19, the Australian government should not have waited until aboriginal communities were stricken with COVID-19 to intervene.

Aboriginal Australians also live a different lifestyle from their white counterparts. While most white Australians live in households of two to five people, Aboriginal Australians tend to live in large households with ten to fifteen people. This makes screening for COVID-19 and quarantining extremely difficult. COVID-19 can also spread faster in populations with larger households because there are fewer physical barriers between people, like walls. To make matters worse, adequate resources for a quarantine like tents, cots, and protective equipment rarely make it to their remote destinations, leaving quarantining up to the local community. The quarantine protocol in Wilcannia was severely underdeveloped. People who arrived in town from other areas had to quarantine with the already infected population, increasing their chances of getting COVID-19.

Moreover, vaccine distribution to the more remote areas where Aboriginal Australians live took a long time. The government was extremely slow in distributing the vaccine to aboriginal communities. There is no current vaccine rate available for aboriginal people in or around Wilcannia, but the last reported percentage was 16% in August. In December 2021, aboriginal vaccine rates (where the government has recorded them) were hovering around 50% overall, with higher rates up to 85% near Sydney and as low as 21% in Western Australia. Most white Australians live in big cities like Sydney, and as a result, have a higher vaccination rate. Australia’s prime minister blamed the slow vaccine rollout on the size of Australia and the remoteness of the country. However, while Australia is enormous, this should not have been an afterthought. The prime minister and his advisors should have considered how they were going to vaccinate the aboriginal population just like they considered how they were going to vaccinate the majority white population in Sydney and Brisbane, the first places to receive vaccines. To complicate matters, Indigenous Australians are also skeptical of accepting the vaccine because of rumors that the vaccine causes blood clots.

Aboriginal Australians are highly susceptible to developing pre-existing conditions. In remote Australia, only 4 in every 10 people met the guidelines for recommended daily fruit intake, which has proven effects on heart disease and diabetes. The percentage of people that received the recommended amount of daily fruit has also decreased from 49% to 42% from 2013 to 2019. Furthermore, 64% of remote indigenous Australians qualify as overweight or obese, which can have effects on pulmonary health and type 2 diabetes. Aboriginal Australians have historically been marginalized from health services, experienced food insecurity, have had poor access to clean water, sanitation, and adequate housing. 46% of people surveyed also replied that they had a chronic condition, a 6% rise from the last survey in 2012-2013. These statistics indicate that indigenous Australians are an at-risk population when it comes to COVID-19 because they are affected by factors that lead to a compromised immune system. However, regardless of the impact of COVID-19, a 2005 study found that Aboriginal men specifically in Wilcannia had a life expectancy of 37, extremely low even by global standards.

The result of these factors was a population left extremely vulnerable to COVID-19. To make matters worse, this population was completely disregarded by the Australian government. The government was focused on controlling COVID-19 in its biggest cities along the coast, where the majority of White Australians live. This led to snail’s-pace vaccination rates in the rest of Australia. While this is somewhat reasonable given the population percentages and density in cities, it should not have been an excuse for the amount of time Prime Minister Scott Morrison took to organize vaccination in the interior. The Aboriginal people feel let down by their government yet again. A resident of Wilcannia said of the government, “I am angry. The government did nothing to protect us. They sit in their ivory towers and make decisions on Aboriginal issues.” This is the sentiment of most Aboriginal Australians. This relationship with the government is nothing new. This is how they have always felt about their government. A study from 2004 showed that government medical subsidies in an Aboriginal community were $80 per person per year, contrasted to an affluent white suburb that received $900 per person per year. The white community received eleven times as much money per person, even though studies point to Aboriginal Australians needing more subsidies because of their higher rates of pre-existing conditions. Further, each round of legislation regarding medical care, economic wellness, and social development rests solely in the hands of voters, which in Australia means affluent white people. They have the time to go and vote. Aboriginal Australians, however, do not vote in large numbers because they have larger issues to attend to and because they are rarely targeted for information regarding bills, laws, and legislation.

Since white people settled in Australia, Aboriginals have always been ignored and treated as second-class citizens. Today, Aboriginal Australians only account for 3.3% of the total population, and Aboriginal and non-white Australians only make up around 25% of the population. However, leaders in various sectors across Australia(business, politics, academics) are 95% white and only 5% non-white which is not reflective of the population. The composition of the Australian government is that of the White Australia period, a postwar period that restricted immigration. However, this ended in 1966. So the question remains, how has there been almost zero change in government composition over half a century? Institutional racism remains in Australia. COVID-19 was one instance where this perverse relationship between Aboriginal and state shone through. It showed that the life of a white person living in an urban area is considered more valuable than an Aboriginal person with a pre-existing condition living in the interior. They knew the state of their aboriginal population and yet they chose to act slowly and without deliberation.