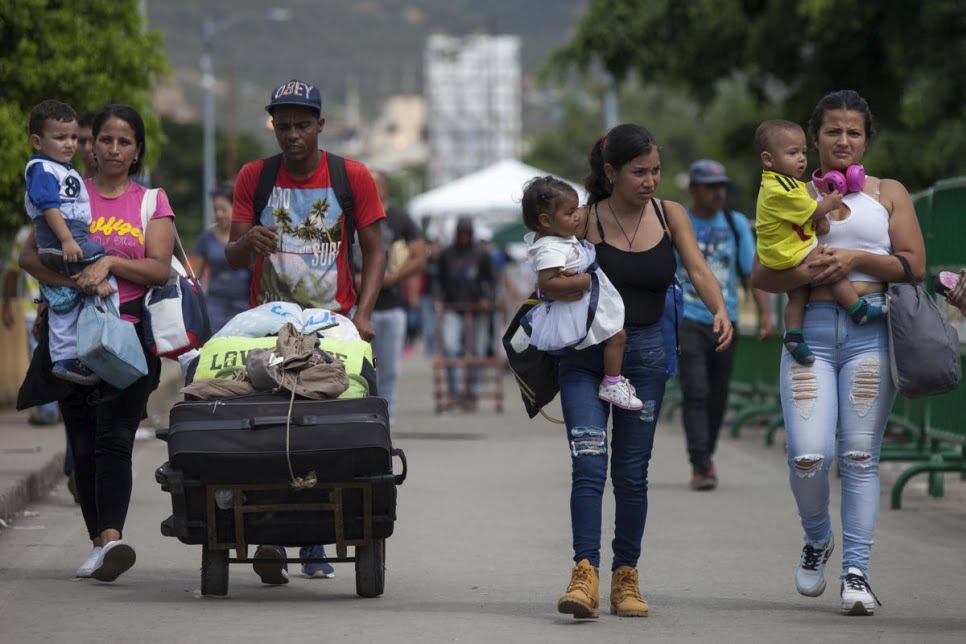 These are just some of the aptly-named “grim indicators” that led the Council on Foreign Relations to the conclusion that “Venezuela is the archetype of a failed petrostate.” Despite severe economic woes, the Venezuelan autocrat Nicolás Maduro has maintained his grip on power after claiming victory in a 2018 election that was widely criticized as a sham. The country he leads is now the poorest in South America, with three-fourths of Venezuelans entrenched in extreme poverty. Food insecurity and supply shortages run rampant.

Faced with the Scylla of humanitarian crisis at home, over six million people have plunged into the Charybdis of external displacement. Braving the hazards of the Latin American jungle, migrants’ prospects are precarious. Nonetheless, they have flooded into the neighboring countries of Colombia and Peru and have even journeyed as far as the United States border—only to be returned to Latin America via removal flights under a pandemic-era order, a move that the Department of Homeland Security confirmed on January 27.

In this context of mass exodus, women and girls are particularly at risk: sex traffickers are taking advantage of the situation to recruit female refugees and force them into sexual slavery. In 2011, the United Nations Office on Drugs and Crime (UNODC) reported just 5 Venezuelan victims of human trafficking abroad; in 2018, the year of Maduro’s contested re-election, the office identified a total of 430 cases. The women’s rights organization Mulier Venezuela counted a staggering 517 women rescued from trafficking networks in 2020, but the UNODC warns that for every victim identified, there are 20 more women who are not.

“This type of crisis is taken advantage of by trafficking networks to capture women and girls in situations of vulnerability and take them to other countries to exploit them, above all sexually,” Selene Soto, a lawyer for the international nonprofit organization Women’s Link, told Voice of America.

The sexual exploitation of women and girls is currently the most common form of human trafficking in South America. A common tactic for traffickers is to present false job opportunities to women leaving Venezuela. Lured by the promise of dignified working conditions abroad and a haven from the chaos of their homeland, the women arrive in a neighboring country, where traffickers coerce them into work as prostitutes. Other women resort to forced marriage with gang members to ensure their own safety, while others still are assaulted by police and armed criminals while crossing national borders. In communities close to the border, “transactional sex,” or the exchange of sex for products to cover basic needs, also flourishes. Whatever the case, trafficking victims lack the physical and economic security to fend off their exploiters.

As with other humanitarian crises across the globe, from Syria to the Congo, the COVID-19 pandemic has aggravated the plight of Venezuelan migrants. Initially, Colombia closed its border with Venezuela for political reasons, joining with the U.S. and European Union in its backing of Venezuelan opposition leader Juan Guiadó. Later on, however, Colombia scrapped plans for reopening as the virus surged across the globe. Months later, in October 2021, the delayed reopening was slow to materialize. Meanwhile, refugees resorted to informal, clandestine routes known as tronchas. Human rights defenders have observed a proliferation of criminal activity along the tronchas; among them, human trafficking, sexual abuse, survival sex, and gender-based violence are salient. Moreover, the pandemic has exacerbated economic insecurity, enhancing the allure of traffickers’ spurious offers, and migrants seeking to enter other countries face greater stigmatization and racism associated with fears that refugees will spread the virus.

“As a result of the outbreak, refugees and migrants who were previously at less risk of being trafficked may become victims” determined a report by the Regional Interagency Coordination Platform for Refugees and Migrants of Venezuela (R4V), “while the vulnerability of people already at risk of being trafficked may be further aggravated, for example, in the case of women and girls who have been disproportionately victims of this crime.”

For those fortunate enough to establish themselves abroad, new perils abound. A high percentage of Venezuelans are in an “irregular situation,” designating their lack of legal status in the host country. Fears of deportation and legal bias against foreigners are compounded by the threat of reprisal from traffickers, resulting in under-reporting of trafficking crimes. At the same time, gender-based violence, including violence against the LGBTQ community, has skyrocketed across Latin America, menacing women irrespective of state boundaries. And although many women initially seek other forms of employment, prolonged hardship may ultimately push them into prostitution to scrape out a living.

These efforts, though admirable, are palliative at best. Stories of survival and recovery are curtailed by the persistent instability in Venezuela that will only continue to drive desperate women into danger. Without far-reaching change to secure livable conditions for Venezuelans, there can be no promise of a better world waiting in the wings.

In this respect, the role of the U.S. becomes especially relevant. Beginning in 2017, the Trump administration slammed the Venezuelan dictatorship with aggressive sanctions under a “maximum pressure” policy, targeting government assets and the state-owned oil company, known by the acronym PdVSA. Maduro doggedly remained in control, while the U.S. sanctions, according to a report by economist Luis Oliveros “directly contributed” to Venezuela’s decline, “and to the further deterioration of the quality of life of Venezuelans.” In fact, a recent study concluded that the U.S., by limiting Venezuela’s access to foreign exchange, contributed to a 72% decline in the country’s per-capita income, the largest-ever economic contraction in Latin America. These figures suggest why unilateral coercive measures, economic measures by one state to compel policy change in another, are increasingly viewed as violating what international diplomat Idriss Jazairy referred to as “an emergent (if not already established) rule of customary international law,” the international rules emanating from general practices accepted as law.

With Donald Trump out of power, the U.S.’s hardline stance has softened somewhat. President Joe Biden started easing sanctions in 2021, when negotiations between the Maduro government and the opposition party appeared imminent, but after Cape Verde extradited a Maduro ally to face charges in the U.S., Venezuela halted the talks. Now, a path that integrates humanitarian aid with a renewed diplomatic push for peace negotiations— bolstered, if necessary, by economic sanctions that do not outright cripple the state— may be the best way forward.

Venezuela’s trafficking epidemic could fuel any number of dismal conclusions on patriarchy, profiteering, and human cruelty. But as far as the global community is concerned, the crisis is a cautionary tale. Even from the lofty vantage of international diplomacy, political leaders cannot fail to consider the consequences of their choices on the ground. The COVID-19 threat unquestionably complicates humanitarian considerations— but, by intensifying costs, also makes them all the more crucial.