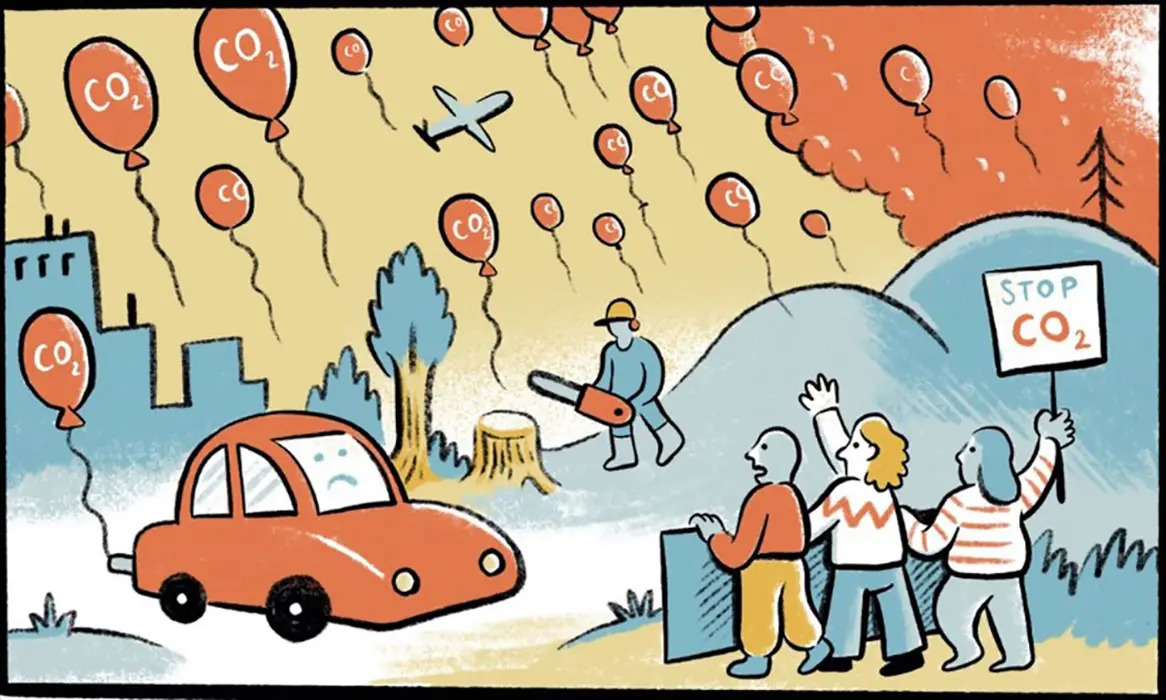 The Earth is Begging for a Carbon Border Tax

In 2015, the US signed on to the Paris Agreement, vowing to work towards a goal of reducing global warming to below 2 degrees Celsius, compared to pre-industrial levels, by 2100. Scientists argue that even this increase is too high, ideally it should be below 1 degree. But, as of right now, we are on track for 3 degrees Celsius of warming by 2100. This is devastating to the climate and will only exacerbate the habitat destruction and species extinction that has already begun. This irreversible damage can almost entirely be credited to human activity. At this rate, Earth will be uninhabitable in the near future.

To prevent the severe effects of manmade global warming on the environment, we must address the most significant contributor to climate change: greenhouse gases. Carbon dioxide makes up 80% of greenhouse gas emissions.  This means it’s essentially impossible to prevent permanent environmental damage without significantly reducing the burning of carbon into the atmosphere. But activists and experts differ in how to achieve this.

Many environmental movements focus their advocacy on encouraging individuals to reduce their personal carbon footprint, for example, by limiting meat consumption or shopping sustainably. While this obviously has massive benefits, it places the majority of the blame squarely on consumers; a common tactic of producers to deflect responsibility. This ignores the fact that corporations are the major producers of fossil fuels;  100 companies are responsible for 71% of the world’s greenhouse gas emissions. But this statistic hardly phases these companies who are much more concerned with their profit over the irreversible damage they are contributing to the climate. Since we cannot count on these capitalist driven corporations to cut down their carbon footprint on their own accord, legislation needs to be put in place to regulate the private sector and de-incentivize the use of carbon emissions.

To reduce the carbon footprint of large corporations, the EU proposed the Carbon Border Adjustment Mechanism (CBAM) in July of 2021, which is designed to discourage the imports of carbon-intensive goods. CBAM is a carbon border tax, meaning it is a duty on imports based on the amount of carbon emissions resulting from the production of the item . This tackles the issue of “carbon leakage,” where businesses transfer their climate destructive production to nations with lenient emission regulations. This is especially an issue in the EU, where products that have high greenhouse gas emissions associated with their production process are taxed high. But, under the CBAM system, importers will have to buy a certificate corresponding to the amount of carbon emissions their goods produce, which aligns with the cost as if the goods were produced in the EU.

Therefore, if a corporation wants to sell in the European market, they will have to pay for their emissions, no matter where their goods were produced. This will primarily impact cement, iron and steel, aluminum, fertilizers, and electricity imports, the sectors with most risk of carbon leakage. This proposal is likely to be passed, with a transitional period starting in 2023 and should be fully implemented by 2025. The transition period will only tax the direct emissions of the greenhouse gases that the production process creates. By 2025, the EU intends for the tax to cover the indirect emissions as well, the carbon emissions from the electricity used to produce the goods.

Considering the U.S. is the second largest contributor to greenhouse gas emissions, the burden to reduce the production and consumption of carbon heavy products greatly falls on our government. Following the EU’s proposal, many Congress Democrats proposed their own version  of a CBAM system by implementing a fee for polluting industries proportional to every ton of carbon dioxide they emit. Under their proposal, a tariff starting in 2024 would affect around 12% of imports, and would  cover petroleum, natural gas and coal and, like CBAM, products with a large carbon footprint: aluminum, steel, iron, and cement.

While the EU’s CBAM is backed by significant support, the same cannot be said for the US’s proposed carbon border tax. It is notoriously difficult to pass any sort of climate legislation in our nation. One reason can be attributed to the aversion of spending large sums of money, which is especially embraced by Republican legislators. But this seems hypocritical; despite the trillions of dollars in budget annually, spending on climate measures is often deemed excessive.

Secondly, the oil and gas sector is a massive financial contributor of many legislators. Therefore, a politician’s climate advocacy could mean them losing money and support, something many of them seem to value over the state of the climate. In October 2021, Biden’s proposal of a $150 billion clean electricity program, which would reward industries that stopped burning fossil fuels in favor of wind, solar and nuclear energy, and penalize those that did not, was scrapped, due to the lack of support from Senators Joe Manchin and Kyrsten Sinema who deviated from party lines and blocked the passing of the bill due to opposition towards the spending level. Some Republicans initially explored the idea of a carbon tax, because it would reduce Chinese imports and protect U.S. industries. But, because it comes with the cost of pricing imports higher, Republicans have ultimately come out against it. In fact, Senator John Barrasso of Wyoming, the top Republican on the Senate Committee on Energy and Natural Resources, called the clean electricity blueprint a “freight train to socialism”  and said the implementation of a border tariff would start a trade war. This is very indicative of the priorities of many Americans: the climate is collateral to low prices and cheap imports.

Other criticisms emerge from the efficacy of a carbon border tax, which doesn’t ban industries from polluting, but rather makes pollution more expensive. If industries are taxed higher for their production methods, they will inevitably raise the prices of their goods. This means products such as medical devices, cars, and appliances will be more expensive for American consumers, which especially harms low-income individuals and communities. This also conflicts with Biden’s promise to not tax any American earning less than $400,000 per year and his efforts to avoid hurting the middle class. Additionally, this would fuel the Republican’s claims that the Biden administration and Democrats are driving up inflation.

However, this is not justification for entirely rejecting a carbon border tax. The financial distress placed on lower income communities is already extremely pertinent; legislation to mitigate this extreme inequality has been long overdue. Not to mention, environmental hazards disproportionately affect lower-income and POC communities. Allowing carbon emissions to persist would deprive communities of ethical air and water quality, leading to long term health consequences of individuals in these communities. If relieving inequities of the lower class and minority groups is a priority, then reducing greenhouse gas emissions is necessary and urgent. Additionally, the long-term goal of a carbon border tax is to significantly reduce or eliminate production that requires carbon emissions. This can be achieved with a combination of taxing carbon production and subsidizing clean energy use. So while there may be a brief period of inflation when industries are adapting to new production methods, products should fall back to, or below, the original price, but made more sustainably. Therefore, a carbon tax is economically efficient in the long run.

There is no doubt that the US implementing a carbon border tax would have massive effects. There is already evidence that this tax is successful in achieving reduced carbon emission in countries like Sweden, Japan, and Canada. But with the global influence The United States has, implementing a carbon border tax would allow for a domino effect of other nations following in its footsteps. This takes the world one step closer in achieving or surpassing the goals the Paris Climate Accord established and preventing a catastrophic deterioration of our planet.