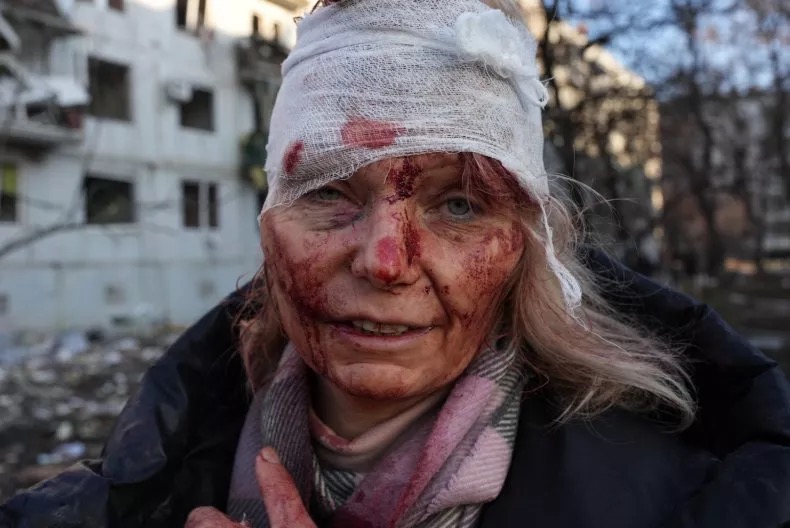 The Human Cost of Putin’s Vanity

At 6 a.m. on Thursday in Russia, Russian President Vladimir Putin declared the beginning of a “special military operation” in Ukraine, capping off months of international concern about a war between Ukraine and Russia. In his nationally televised speech, Putin repeatedly underscored the supposed presence of Neo-Nazism and genocide of pro-Russian separatists in Ukraine as the primary motive for Russia’s militaristic intervention.

“Your fathers, grandfathers, great-grandfathers did not fight the Nazis and defend our common Motherland, so that today’s Neo-Nazis can seize power in Ukraine.” Putin’s baseless claims about the persecution of Russians in Ukraine echo claims that Adolf Hitler made when invading the Sudetenland during WWII, that ethnic Germans in the region wanted to unify with Germany, so his invasion was necessary.

Subsequent news reports from Ukraine have identified Russian attacks originating from Belarus, Russia and elsewhere, using artillery, heavy equipment and small arms to cross the border. It is unsurprising Belarus is empowering Russian military actions, given the Belarusian president Lukashenko and Putin’s close relationship. In response, the U.S. Treasury announced sanctions against 24 Belarusian individuals to punish their support for the invasion.

Ukrainians in Kyiv, the capital of the nation, who began to hear loud explosions and air raid sirens throughout the city on Thursday morning, began fleeing the city and seeking safety in bomb shelters following the President Volodymyr Zelenskyy’s urges for civilians to leave the nation, and the enactment of martial law. Transportation is limited, as international flight authorities closed the Ukrainian airspace and later all of the Eastern European airspace for commercial flights to protect against potential Russian attacks. Reports were later transmitted that Russia launched cruise and ballistic missiles at airfields and military headquarters near the capital, while the American Secretary of State Anthony Blinken declared early morning on Thursday in Washington D.C that “all evidence suggests that Russia intends to encircle and threaten Kyiv, and we believe Moscow has developed plans to inflict widespread human rights abuses—and potentially worse—on the Ukrainian people.”

In Eastern Ukraine, the Ukrainian Defense Minister Oleksiy Reznikov reported that Ukrainian units, military control centers and airfields are defending against heavy Russian shelling, while the air force attempts to repel Russian aerial attacks. In Lutsk, a town in northwestern Ukraine less than 100 kilometers from Poland, reports of bombing and airstrikes struck “a television tower…Lutsk airport and a nearby military army base.” In the disputed territory of Luhansk, the interior Ukrainian ministry said that two villages have been captured by Russian forces, a number which steadily increased as Thursday continued. The General Office of the National Police in Ukraine in Ukraine reported the first casualties of the war: 6 dead, 7 wounded and 19 missing in Podolsk, a region in Odesa. The number of Ukrainian casualties rose to 137 dead soldiers and up to 10 dead civilians by the end of Thursday in Ukraine. Ukraine’s military also reported 50 Russian casualties.

Russian military reports claimed to have taken out Ukrainian infrastructure at air bases and rendered air defense systems inoperable while denying Ukrainian reports that Ukrainian forces had shot down military aircrafts and helicopters over Ukraine. Meanwhile, videos verified by media agencies captured smoke rising from Kherson International Airport, located in the south of Ukraine. Most dramatic was the seizure of Chernobyl by Russian forces, sparking global fears of another ecological disaster originating from shelling nuclear waste, thus sending radioactive particulate matter across Europe.

As Ukrainians flee, Hungary, Poland, Romania and Slovakia stand to absorb hundreds of thousands of refugees, sparking another refugee crisis in Europe alongside continuing flows of refugees fleeing war in the Middle East and parts of Africa. Romania’s Defense Minister Vasile Dincu  stated on Tuesday that the nation was prepared to accept 500,000 refugees if necessary. Meanwhile, refugee resettlement groups urge the United States to accept Ukrainian refugees, as predictions of a mass exodus from Ukraine are substantiated by long lines at neighboring countries, a policy consideration that Jen Psaki, the White House press secretary, later affirmed.

On Thursday morning,  Secretary-General of NATO Jens Stoltenberg expressed disappointment with Russia’s advancements into Ukraine, stating that “Russia has chosen the path of aggression against a sovereign and independent country.” The show of solidarity by NATO reaffirms the importance of NATO’s commitment to its member nations and the strength of those members to combat any potential attack that spills over from Ukraine. While Ukraine is not a member of NATO, Hungary, Romania, Poland and Slovakia are, meaning any military action taken by Russia in another of those bordering nations would immediately result in military action taken by NATO, triggered by Article 5. Article 5 of the North Atlantic Treaty, NATO’s founding document, states that if a “an armed attack against [a NATO member] shall be considered an attack against them all and consequently they agree that, if such an armed attack occurs, each of them… will assist the Party or Parties so attacked by taking… such action as it deems necessary, including the use of armed force.” To prepare for that potential outcome, the United States deployed 7,000 troops to Germany to reassure NATO allies and display military strength.

Despite the prompt response from NATO, the advancement of Russian forces into Ukraine within the past day has led many experts to believe that Ukraine may be successfully annexed. Even with international support, Ukraine’s military apparatus is easily dwarfed by Russia’s. With less artillery, troops and weaker technology, the smaller nation’s line of defense is already crumbling, a reality that Ukraine’s top generals had long predicted. Mobilized troops stand ready around Ukraine’s borders, but nations appear hesitant to engage in a firefight with Russian forces. President Biden confirmed in a press conference earlier this afternoon that “our forces are not and will not be engaged in the conflict.” And although the NATO secretary-general insisted that the international alliance will “defend and protect… every inch of NATO territory,” there have been no explicit promises that extend to direct interference on Ukrainian soil.

Ukraine’s total absorption into Russia would have daunting implications for Europe’s geographical line of defense against future Russian aggression. The potential for further violence to explode within the region in the coming years is not far-fetched, and talks of repealing the 1997 Founding Act, which sets limits on military infrastructure within the borders of Eastern European NATO members, are already underway. However, the question as to whether NATO could properly withstand and respond to aggression from Russia is still unknown. In the past twenty-four hours, Russia has demonstrated the might of its aerial forces in Ukraine, making NATO painfully aware of its acute shortage of air defense in comparison. Even the mobilization of troops and artillery over the past few weeks across Eastern Europe has been proven difficult in the face of decaying infrastructure. NATO’s own weaknesses lay exposed now more than ever.

Within Russia, the move to fully invade Ukraine was dubiously met at best and fully opposed at worst. Protests erupted across Russia that resulted in over 1700 arrests and subsequent speeches conducted by the Kremlin justifying the invasion.

In response to the new round of Western sanctions levied at Russian banks and businesses, Putin claimed that the country should expect sanctions because “[they] didn’t leave us any chance to act otherwise. They created such risks in the sphere of security that it was impossible to react in a different way.” It is unclear who “they” refers to, as Ukraine lacks the capability to pose a serious security threat to Russia and is not a member of NATO or the EU, meaning NATO cannot send forces to augment the Ukrainian military.

Despite this glaringly obvious fact, there were peculiar statements at the most recent Conservative Political Action Conference by American right-wing pundits, such as Candace Owens, a popular podcast host, who urged her three million Twitter followers to read Putin’s remarks on Ukraine “to know what’s actually going on.” Tulsi Gabbard, a former Democratic congresswoman and presidential candidates wrote on Twitter: “This war and suffering could have easily been avoided if Biden Admin/NATO had simply acknowledged Russia’s legitimate security concerns.” To be clear, the concerns Putin had were related to the increasingly close relationship between Ukraine and Western Europe and the mere potential that Ukraine would join NATO and the EU. As a sovereign nation, Ukraine has the right under international law to decide with whom to ally and whom to turn to for territorial defense, a matter outside of Russian jurisdiction despite any revisionist history rhetoric Putin propagated to justify his unlawful invasion.

The Russian invasion revealed two critical issues: the first is that Putin does not fear the domestic repercussions of multiple rounds of crippling economic sanctions — that his desire to control Ukraine outweighs his desire to improve his domestic popularity. Secondly, Ukraine is painfully alone and outgunned. NATO refuses to answer whether Ukraine will be granted accession into the group, leaving the only current option for the Western allies to respond through economic threats, not military intervention.

Given the enormity of the Russian military compared to the Ukrainian forces, without the help of other forces, hundreds of thousands of Ukrainians will die, millions will be displaced, and the future of Eastern Europe will be forever changed to reflect Russian dominance.