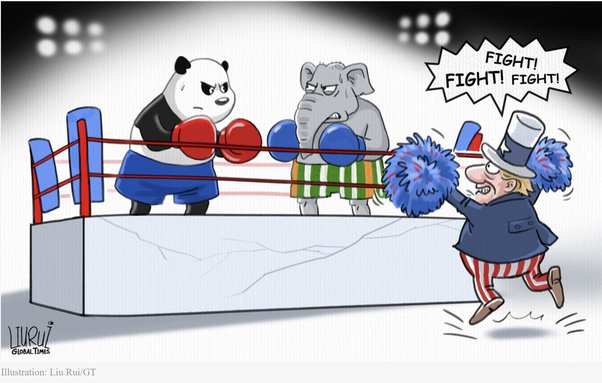 The Sino-Indian Conflict: Are Boundaries Made To Be Invaded?

When two of the fastest growing nations in the world draw a Line of Actual Control (LAC), its demarcation is treated more as a boundary that is intended to be violated rather than adhered to. Each country tests its limits by building infrastructure, deploying a greater amount of military personnel, and starting spontaneous skirmishes with one another. However, what happens when an entire 100 home village, a ‘xiaokang’ (well-off or moderately prosperous in Mandarin) village, is discovered along the border? If the border pact is continuously violated, what is its significance?

India and China have grown as major world powers in the modern era. They derive their geopolitical influence from factors like their population size, nuclear weapons, and economic growth. The Line of Actual Control (LAC) is a 2,100-mile-long border located in the north-east part of India that has been poorly demarcated by both nations. It lies in a valley filled with streams and mountains that shift and transform, creating a rather volatile region. These two countries share a long history surrounding the LAC beginning with the Sino-Indian War of 1962.

Subsequently, the countries have engaged in a political battle that has consisted of symbolic acts and military plays. Since 2020, tensions at the LAC have been at an all-time high as the countries competed with each other through new infrastructure projects, like the building of roads and highways, on either side of the LAC. The use of force and military resources has caused immense damage to infrastructure and led to fatalities and the injury of 20 troops on either side amidst fatal confrontations. Both countries are known to provoke each other at the border by accusing the other of ‘firing shots’ and building bridges or other kinds of establishments. Any movement or action by one country is met with an equal and opposite reaction by the other, as seen in the banning of the Chinese applications by India when China injured Indian soldiers.

Recently, the part of the LAC in Arunachal Pradesh, a northern state in India, has been extremely unstable and as a result, unpredictable. China’s People’s Liberation Army (PLA) has been posting about an attack at the Arunachal Pradesh border on Twitter, from both verified and unverified accounts, issuing a warning to India about the increase in military pressure from their end. India has since been conducting checks and increasing troops at the border.

On the 4th of November 2021, the United States Department of Defense released a report informing India of a 100-home Chinese village close to the Arunachal Pradesh border. The report states, “Sometime in 2020, the PRC (People’s Republic of China) built a large 100-home civilian village inside disputed territory between the PRC’s Tibet Autonomous Region and India’s Arunachal Pradesh state in the eastern sector of the LAC.” The infrastructural projects on either side have incrementally become greater in order to place greater emphasis on each country’s claim at the LAC.

The most important aspect of this village is the consequences it forces on the bilateral peace talks and relations that India and China share. It’s important to note that the US has written this report and published it. What does this mean for the constantly shifting alliances in the international political community? India is keen to resolve the ongoing military standoff through dialogue or negotiation, but India claims it is left with no option but to keep large scale deployment of its men and machine on the Himalayan frontiers to counter any ‘misadventure’ by the Chinese forces. However, in recent times, China has been accepting of restarting bilateral dialogue with India in order to resolve the ongoing conflict present along the LAC. These talks have been unsuccessful as the Chinese military claimed that India had made “unrealistic and unreasonable” demands while the Indian diplomats laid the blame on China stating that they were trying to alter the status quo, that they were un-agreeable and also unable to provide any forward-looking proposals.

Partisanship in India has certainly not helped this issue as opposing parties use this threat to the nation’s security as an opportunity to increase their voter banks. Rahul Gandhi, leader of Congress tweeted, “Our national security is unpardonably compromised because GOI has no strategy and ‘Mr 56’ is scared… My thoughts are with the soldiers risking their lives to guard our borders while GOI churns out lies.” Instead of unifying the country and aiding the government navigate through tumultuous times, opposing party members have been criticizing each other’s actions to no avail.

The discovery of this ‘xiaokang’ village has been a development of massive proportions in the Sino-Indian conflict especially due to the volatile climate being experienced on either side of the LAC since 2020. The involvement of the US is unsurprising as they interfere in diplomatic relations between the two countries, and it certainly does help the circumstances as China discourages India’s growing alliance with them. The most important question is — what does this mean for the future of Sino-Indian conflicts? Will there ever be a resolution and peaceful agreement between the two countries that they will adhere to? Or are they simply going to keep testing each other’s limits?