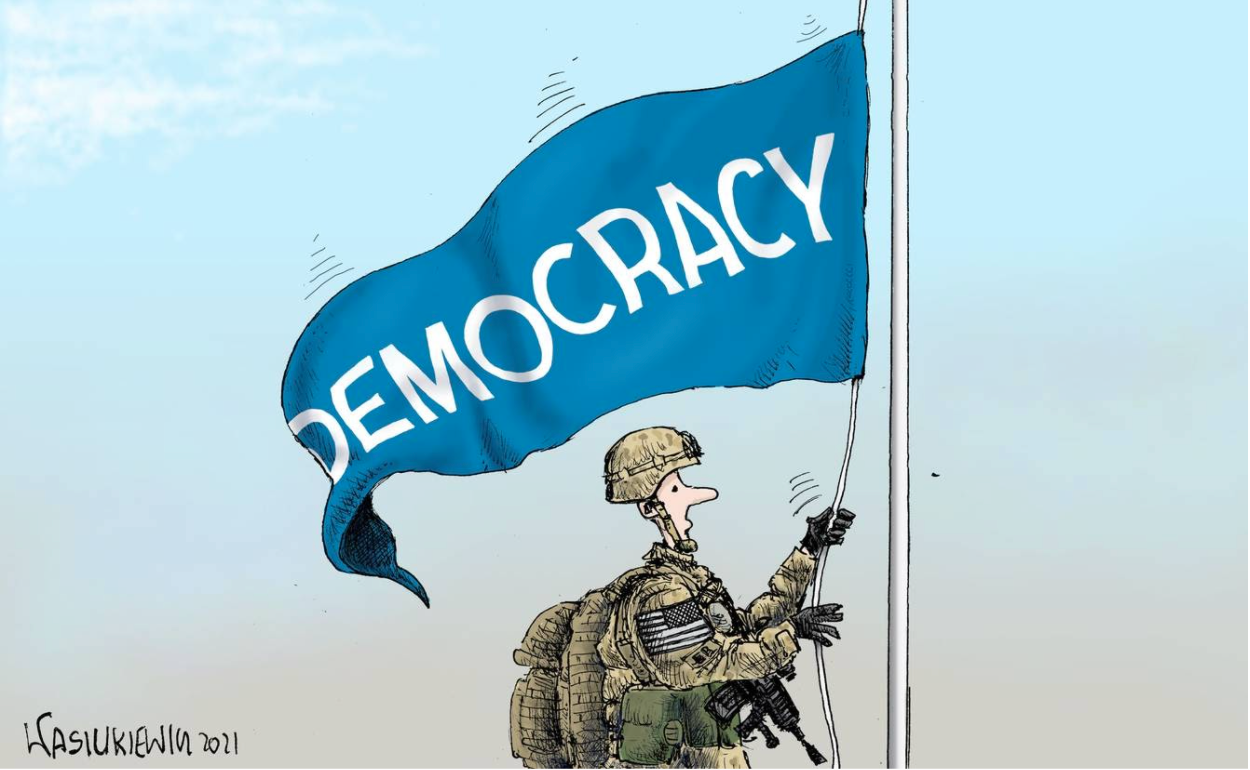 The Fallacy of Guns, Gold & Glory: Time for the US to Reevaluate its Foreign Policy

On February 4th of 2021, Joe Biden stood in the U.S. Department of State headquarters and delivered an important message to Americans everywhere: it was time for the United States to reclaim its role as a guardian of democracy on the global stage. He portrayed American leadership as the key to combating what he called “advancing authoritarianism,” and he proudly announced to the press that “diplomacy [was] back at the center of our foreign policy.” His stance was clear:  democracy is America’s primary source of strength, making it stand out on the international scene.

This portrayal of the United States as the ‘policeman of the world’ working to promote democracy, is familiar. It echoes a message from Bush in 2003, restating America’s responsibility to spread democracy: “our commitment to democracy is also tested in the Middle East. […] And the questions arise: Are the peoples of the Middle East somehow beyond the reach of liberty?” This speech featured a strong sense of “democracy blanket,” often used to justify foreign interventions abroad.

The link between foreign policy and democratic ambitions has become a trademark of American policy over time. This narrative reemerges today with the idea of “war to end all wars,” the reliance on American troops to “stabilize” the consequences of American interventionism and the use of violence to supposedly secure peace. Both at home and abroad, the US has spent the past hundred years tied up in two world wars, a cold war, a war on drugs and a war on terror. While these conflicts all took place in vastly different contexts, they were all rooted in one single ideal: promoting peace and order within and beyond American borders. Today, in a world where wars as we know them have been replaced by covert foreign interventions or humanitarian interference, it is important to look at which mechanisms are used to maintain peace and how they have evolved over time.

With about 11% of its national budget spent on the military in 2020, despite the severity of the Covid-19 crisis at home, it becomes clear that the U.S. should be more mindful when intervening abroad. Militarism is far from the only solution to conflict resolution, yet has often been treated as such. In fact, defending violent action for the sake of “promoting democracy” is not only obsolete, but also flawed. It is time for us to look elsewhere and adopt a new approach to foreign policy; the time for guns, gold and glory at the center of American foreign policy is over. In this age of communication, the US has to learn how to work with activists on the ground, understand the situation on a case by case basis, and act with empathy and respect for human dignity. Its refugee policy should also be in line with these objectives, and we must introduce a focus on mechanisms of transitional justice.

A Flawed Theory of Peace – Need for International Collaboration

Time and time again, foreign countries have criticized the US for its unilateral interventions abroad. This often came with a disregard for the mechanisms and will of peacekeeping international institutions like the United Nations. While the United States’s large military resources contribute to its role as a big player on the international stage, its occasional unwillingness to act uniformly with other countries has sparked controversy worldwide. U.S. policy relies on a key concept called democratic peace theory; introduced by Kant in Perpetual Peace, it refers to the idea that two democracies are less likely to go to war with each other than with a different political regime.

In recent years, this theory has also grown to include the promotion of market-based economic reforms along with other institutions tied to democratic systems. However, in his utopia for eternal peace, Kant comes up with the idea of an international federation to act as a peacekeeping institution. This was the first iteration of the League of Nations, replaced by the United Nations in 1946. This framework was intended to allow a single entity to act to defend human dignity; it also ensured limitations on unilateral interventions, which could be motivated by covert objectives. Therefore, it seems rather ironic that interventions abroad––like in Iraq in 2003 or Afghanistan today––are based on a subverted version of Kant’s concept of peace, with the U.S. forgetting the importance of using proper channels of collaboration introduced in this very same book of political theory. However, after the crushing failures of nation-building interventions in Afghanistan, Biden’s administration is now reluctant to act in Haiti. This shows a much needed reconsideration of our national interventionist policy, especially as Haiti is still recovering from past occupations and their consequences.

This idea that democracy is the ultimate and only true legitimate political system played a central role after the end of World War I, with the parting of the defeated Ottoman Empire. Done without any regard for ethnic differences, cultural variations or in historical background, Western powers then imposed themselves as protectorates, a way for them to “oversee” the recovery of the countries they had disrupted. The Cold War further increased the discourse for foreign intervention in the name of democracy, at the cost of both American and foreign lives, with arguably very little result in regard to supporting a free, liberal state. This promotion of so-called “democratic” ideals, with very little regard for the region itself, has then continued during the War on Terror. The boundaries crossed in the name of peace reflect complex dynamics within international relations, but also a controversial assumption: that a uniform, top-down political and economic system abroad would promote peace.

Unfortunately, it is not that simple.

While liberal democracies are relatively successful at establishing checks and balances to protect the rights of the majority, it is not “one size fits all.” Imposing it abroad could actually lead to unexpected consequences. In fact, democratic peace theory does not hold much reliability outside of western democracies. This is especially true in the case of democratizing countries, in which top-down democracy and forced liberalization of the economy often do not have the expected effect. In a study of African countries, political scientist Errol Henderson found that this concept of exporting democratic ideals to increase future peacekeeping does not hold in certain regions of the world, Latin America included.

In the same way, the IMF imposed economic reforms on foreign countries in the 80s and 90s, equating a more capitalistic system to fairer market practices. This actually worsened the national economic situation of certain nations. In Egypt, the forced privatization of the economy led to their public sector being massively reduced, increasing unemployment and a stark divide in resources between the elite and the lower class. The liberalization of the Egyptian economy, advertised as an “economic decolonization,” actually had devastating consequences for the lives of everyday Egyptians, making the rich richer and the poor poorer. This phenomenon still remains today, with the country lacking accountability mechanisms to uphold economic rules and apply them properly.

Today, Egypt is not facing these consequences alone; this one-size-fits all approach to both political and economic policies has also done irreparable harm in countries like Ecuador, Ethiopia or Greece.

A Need for an Array of New Approaches

Therefore, the United States’s approach has to be context-specific and accept the inevitable diversity of political regimes. What works at home is not always the solution abroad, and we cannot impose it abroad in a top-down manner. Democracy emanates from the people, which is why the U.S. must support grassroots movements and focus on popular demands. It is time to shift our focus to human rights rather than regimes, to what people want rather than what we believe they need. The United States should invest more efforts into supporting activists on the ground, especially in countries where we see a push for new political rights and freedoms — like in the Arab Spring of 2011 or Sudan in 2019 — where a bottom-down approach is much more effective. We should put our resources to the service of the people, helping activists and increasing accountability through international criminal court prosecutions.

Initiatives like the UC Berkeley Human Rights Lab, specialized in verification of open source videos taken during conflicts or uprisings, is a great example of bringing accountability through activism and proper legal channels rather than increased military action. A focus on a strong military often tends to take away the focus from democracy, which has peace and stability as its ultimate objectives. We must also consider national involvement abroad when shaping our refugee policy. One last option is a renewed emphasis on transitional justice, rooted in accountability and redress for victims of conflicts; some successful transitional initiatives often include prosecuting regime leaders, holding truth and reconciliation commissions and creating state archives documenting human right abuses, such as the now famous Syrian Archive.

What You Should Take Away From This

Overall, if the United States hopes to live up to its title of ‘guardian of democracy,’ it must make it its mission to understand the context in which it operates. A top-down approach to democracy is not the answer, and neither is unilateral interventionism. We must relearn how to work with international organizations, step away from our ethnocentric perspective and turn to new justice mechanisms. America: listen to people abroad, hear their claims and understand their stories. Then, if you wish to put your power to their service, do not act in the name of American democracy; act in the name of human dignity. Support human right investigations, political refugee immigration, archival preservation and transitional justice efforts. Refuse to use militarism as a first dispute resolution mechanism.

It is time to leave the era of guns, gold and glory behind us once and for all.