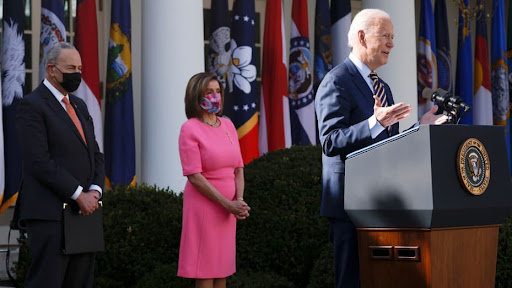 Joe Biden walked out of his inauguration with promises for transformational reforms in almost every aspect of American government, but with brutally slim Congressional majorities to deliver such legislation. Today, the American Rescue Plan and the Bipartisan Infrastructure Framework (BIF) have passed into law and served as major victories for the Democratic Party. On the other hand, the social policy-oriented Build Back Better Act (BBB) has hit enough West Virginian and Arizonan hurdles in the Senate to find itself currently at a standstill, though with some chance it still might pass. After a year of single-minded focus on these big spending bills, the question stands: what will Democrats do next?

With BIF and BBB, Joe Biden and congressional Democrats have effectively checked off key proposals of the president’s agenda. Though at a drastically smaller size and scope than was initially anticipated, it seems unlikely that Democrats will return to infrastructure spending or covid relief soon, and will instead move to other issues laid out during the 2020 campaign.

The unfortunate reality for the president’s party though is that while these budget-focused bills were able to pass by a simple congressional majority, almost every other item on the Democratic agenda requires a 60-vote majority in the Senate to reach the finish line due to the filibuster. Seemingly solid resistance by all Republicans and key Senate Democrats to filibuster reform then effectively kills a vast range of Democratic legislative goals. Immigration reform, a path to citizenship for certain members of the nation’s undocumented population, expanded voting rights protections, additional climate protections and more are all exceedingly unlikely to attract the necessary ten Republican votes needed to pass through the Senate.

That leaves Democrats with their long-sought-after blue trifecta in Washington and little more they are able to do with it, aside from filling Justice Breyer’s now-empty seat and some potential variation of BBB. Following abysmal results for Democrats in Virginia and New Jersey, it seems increasingly likely that Democrats will not maintain this hold on the federal government after the 2022 midterm elections, especially if they do accomplish nothing more while in power. Even more disappointing for liberals and progressives across the country is the very high chance that Democrats will not have unified control of government again for years to come, perhaps a decade or more.

Democrats should not be completely without hope for progress though, as there remains another path forward: criminal justice reform.

President Biden himself has a complicated history with the topic, playing an important, if sometimes overemphasized, role in creating current mass incarceration policies. More recently, he has shifted his tune on the subject and supported new reforms, though with little progress so far.

Importantly though, this is a massively popular issue among Democrats, particularly following the thunderous calls for reform and justice in the protests of summer 2020. Fortuitously though, criminal justice reform also garners significant Republican support, both in polls and on Capitol Hill. The ACLU has found that 71 percent of Americans say it is “important to reduce the prison population,” and even that 65 percent of Trump voters believe that “incarceration is often counterproductive to public safety.” Similarly, the University of Maryland has found that 75 percent of Americans support reductions of some mandatory minimum sentences. Such supermajorities in public support are found in countless polls on criminal justice reform.

Perhaps more importantly, when Congress passed the First Step Act in 2018 to begin reforming the federal criminal justice system, the bill was championed in large part by Republicans and ultimately passed 87-12 in the Senate, uniting Senators as ideologically disparate as Bernie Sanders and Rand Paul. In fact, the bill was designed by a Republican House member, Doug Collins of Georgia, and was touted as a success by Donald Trump himself, yet still garnered unanimous support from congressional Democrats.

The logic follows that if the Senate was able to collect 87 yes votes for the First Step Act, it can likely gather enough votes for a next step in criminal justice reform since it can lose 27 senators and still pass it through Congress. This calculus doesn’t even account for the fact that Democrats have gained an additional Senate seat and the vice presidency since then, further tilting the odds in favor of criminal justice reform. In fact, the Brennan Center for Justice, a nonprofit law and public policy institute, has argued that the votes already exist for more ambitious reforms, if leadership just brings a bill to the floor.

Some may retort that Republicans would be unwilling to support such a bill simply to deprive President Biden of an additional legislative victory. This may be true. Mitch McConnell’s Senate Republican Caucus has proved more than willing to “own the libs” by opposing even common sense measures on several occasions. However, Republicans in this Senate have already proved willing to work across the aisle with Democrats to pass large and popular legislation such as BIF, which passed with support from 19 Republican Senators. Only half of those votes would have to stay onboard to pass a criminal justice bill, if Democrats were in unanimous support. It remains important to introduce a bill when Democrats have control, because even if the necessary Republican votes exist for criminal justice reform, Republican leadership (read: Mitch McConnell) may be unwilling to bring such a bill to the floor under a red majority.

One can look to the SAFE Act, a bill written and introduced by Congressman Bobby Scott (D-VA) and already endorsed by Biden, for a basic framework. The SAFE Act’s provisions would partially decriminalize drug possession, introduce alternatives to prison sentences, institute more treatment programs for drug addiction and mental illness, allow for more lenient resentencing, reduce mandatory minimums for low-level offenses, apply strategies aimed to reduce recidivism and establish new earned time policies. These provisions are drawn from state programs that have already successfully put these initiatives into practice, and are specifically aimed at reducing rates of mass incarceration, improving fairness in sentencing, reducing crime rates and cutting costs — the last two being key selling points for conservatives.

Notably, when previously introduced, this bill attracted eight Republican co-sponsors in the House. Moreover, the plan has garnered support from both the American Conservative Union and the National Association for the Advancement of Colored People (NAACP). With both a presidential blessing and a bipartisan opening, the SAFE Act stands as a potential starting point for viable criminal justice reform — few, if any, other Democratic legislative priorities can boast such good prospects.

Moreover, the SAFE Act aligns with the previous achievements of the First Step Act, which worked to reduce recidivism through targeted intervention programs during and after incarceration, retroactively apply previous sentencing reductions to current inmates, improve the conditions of incarceration and more. It seems likely that the aspects of SAFE that simply advance those introduced in the First Step Act would be relatively easy to pass, especially since (again) the bill could lose the support of more than two dozen conservative senators who supported the First Step Act, and still pass with a smaller group willing to be more ambitious.

Congress need not stop at the SAFE Act though. Other possible reforms that Congress has previously demonstrated bipartisan interest in include leveling the current 18:1 sentencing disparity between crack and powder cocaine, which passed the House with over 100 Republican “yes” votes in October. Additionally, restoration of Pell Grant eligibility for formerly incarcerated people has been suggested in the REAL Act, a bill which also garnered broad bipartisan support, with fourteen Republican co-sponsors and thirty-nine Democratic ones in the House.

It also remains possible that Democrats may decide to finally make the leap and decriminalize or legalize marijuana at the federal level. Notably, Senate Majority Leader Chuck Schumer has highlighted marijuana reform as “one of the high priorities” for his caucus. President Biden too has come out in support of decriminalization, saying “nobody should be in jail for smoking marijuana,” though he has stopped short of supporting full legalization. While this would be an even tougher sell to the necessary Republicans, a bill to decriminalize marijuana at the federal level and give states the full choice to legalize or criminalize marijuana use was introduced by Representative Nancy Mace, a Republican from South Carolina. While this bill has yet to gain momentum, a Republican introducing it is a good sign that this long sought-after grail of criminal justice reform could garner the necessary support to cross the finish line.

Still, significant roadblocks stand in the way of the greatest reform avenues. Cory Booker’s Next Step Act, which his office has called “the most comprehensive criminal justice bill to be introduced in Congress in decades,” incorporates most of the above mentioned programs and many more ambitious planks as well. Such proposals include police reform initiatives, restoration of voting rights to ex-felons and further sentencing reductions. At this time, though, Booker’s bill has not attracted notable bipartisan support, with the only co-sponsorship coming from the notably progressive Senator Ed Markey (D-MA).

Booker’s stagnated bill highlights the reality that there is little chance of a criminal justice reform bill simultaneously being viable in Congress and achieving the truly transformative changes that protestors, progressive lawmakers and many millions of Americans desire. Moreover, America’s federal system means that mass incarceration cannot even be solved by Congress, since most incarcerated people are in state and local prisons. Progress will need to be made in Washington, but also in every state capital and countless more localities.

Even in the federal scope though, bold progress as envisioned by many criminal justice reform advocates would require intensive reworking of law that Republicans, and many Democrats, would simply not sign on to. Take, for instance, Rep. Ayanna Pressley’s (D-MA) progressive “People’s Justice Guarantee” bill that takes such bold steps as abolishing both the death penalty and life sentences without parole—which are extremely unlikely to garner Republican support and poll poorly.

Such programs would also necessitate significant new spending to redesign existing systems and construct new ones centered on restorative justice programs, such as President Biden’s proposed new $20 billion grant program aimed at the state level, incentivizing prevention programs in place of current systems of mass incarceration. However, following the recent trillion dollar spending bills, it seems unlikely that Republicans and moderate Democrats would back such additional spending.

There also exists the opportunity for Biden to take unilateral executive action, such as liberalization of presidential clemency authority or the appointment of new members to the Federal Sentencing Commission. However, such potential is inherently more limited in scope. Not only is it constrained to the federal level, but the pardon power is by nature more individualized and all executive actions face greater scrutiny from the judiciary than does legislation.

So while President Biden’s window for progress is not the opportunity for a giant leap forward or the final step in the process of criminal justice reform, it is a key opportunity for the next step. If Democrats truly value criminal justice reform, they should take this step to materially improve the lives of millions of incarcerated people, plot new courses for the countless Americans who may end up in prison under current policies and lay groundwork for future reform.

Critically, criminal justice reform represents one of the last forward strides that Democrats are actually able to make in this Congress, and perhaps for years to come.