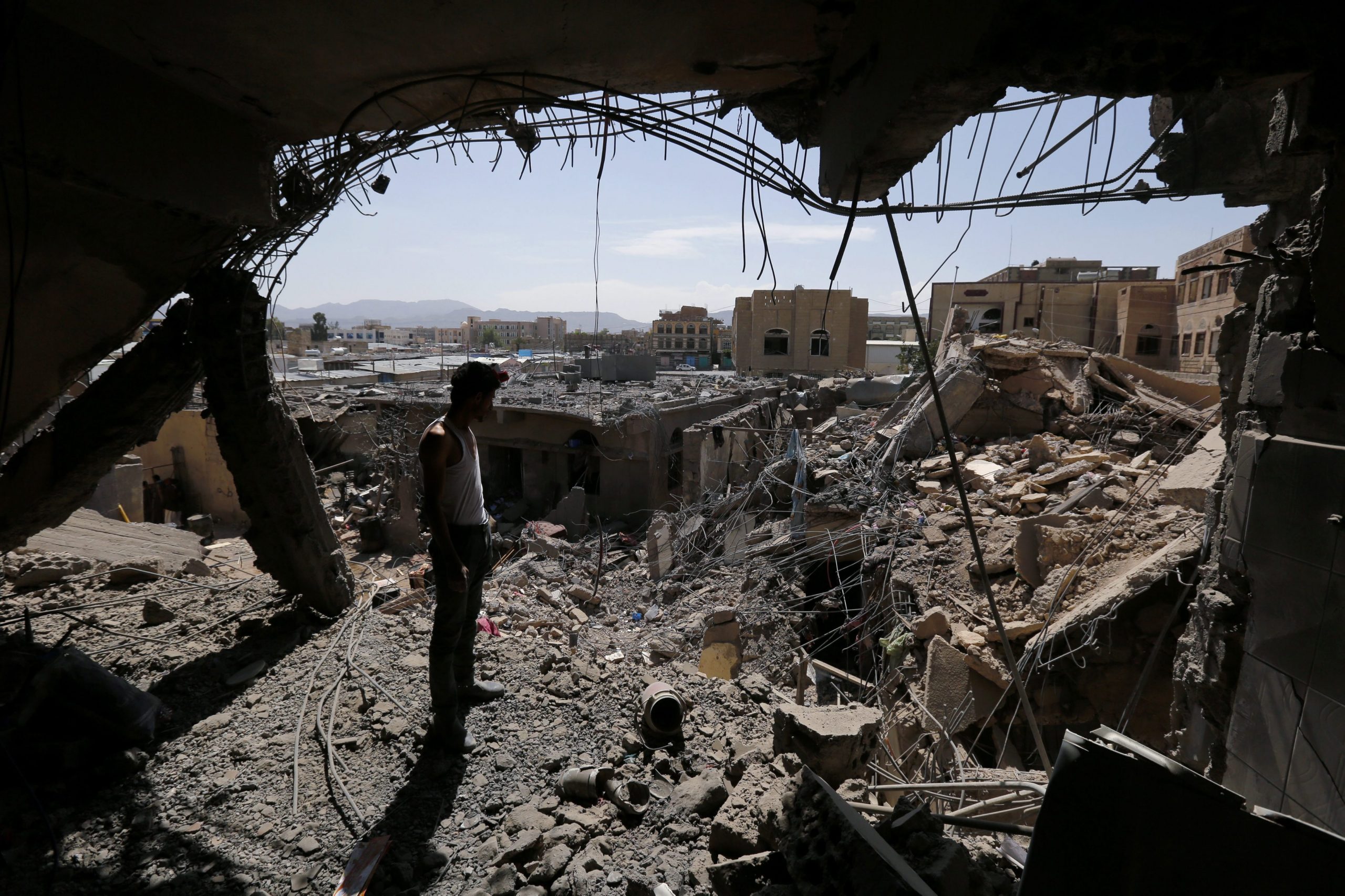 Yes, The War in Yemen is Still Happening.

“We’re literally looking at 16 million people marching towards the brink of starvation.”

We’ve all seen the horrifying images of malnourished children, cities ravaged by war and a nation on the brink of collapse. But, this staggering statistic exposed the true depth of the crisis in Yemen. Fueled by a civil war that has raged on since the end of 2014, the Yemeni crisis has become the world’s worst humanitarian crisis. Yet, there is a distinct absence of media reporting on the country. In fact, one would assume that the Yemeni war had already come to a close by the complete negligence of mainstream media. So where did this whole mess begin, and is the war still happening?

The Arab Spring: From Revolution to Chaos

In 2011, a series of unprecedented protests throughout the Arab World rocked the international community. From the streets of Tunisia, to Egypt’s Tahrir Square, all the way to an already impoverished Yemen, one by one Arab autocrats fell. It seemed, for the first time, that the contemporary Arab world came together to demand dignity, democracy and better living conditions, much to everyone’s surprise. On January 27, 2011, protests reached the borders of Yemen, as citizens began calling for President Ali Saleh to step down amidst an economic crisis and accusations that Saleh would attempt to prolong his presidency with constitutional amendments. On February 25, 2012, after nearly a year of protests, President Saleh resigned from office, beginning the political transition in Yemen. As Abdrabbuh Mansour Hadi, former President Saleh’s deputy, assumed control of the country and the transition process, the many competing forces in Yemen began to unravel. Among the many internal conflicts, Yemenis faced a growing separatist movement in the Southern region of the country, corruption within the government, rising unemployment, food insecurity and the resurgence of the Zaidi Shia Houthi movement. The Houthis, who emerged in Yemen in the 80’s, had long standing issues with President Saleh’s rule due to his economic discrimination in the country’s northern region. The group engaged in many clashes with the regime over the years, but the tipping point that produced the current civil war emerged when they rejected the proposed splitting of Yemen into six federal regions.

As the transition unfolded, the Houthis, in a series of rebellions, began to seize control of the Saada province in northern Yemen. As their victories mounted, the Houthis began advancing southwards, seeking more territory and essentially hijacking the post-revolutionary transition. Initially, the Houthis garnered popular support, as many Yemenis grew dissatisfied with the transition process. Soon enough, the Houthis conquered the capital city of Sanaa. As their successes grew, the Houthis attempted to overthrow President Hadi’s government, in coordination with former President Saleh’s security forces. This bold move soon raised alarms in the broader region, as Sunni led Arab states became concerned with the reality of a Shi’a group assuming power in Yemen.

To counter the growing Houthi influence, Saudi Arabia and the United Arab Emirates, in conjunction with seven other Sunni-Arab states, began a military campaign in Yemen, thus triggering a full-blown war. As coalition troops descended on Yemen, the Houthis were forced out of the southern regions of the country, back towards Aden, a port city in the Southern corner. Soon, as differing agendas between the United Arab Emirates and Saudi Arabia led their coalition in different directions, the war reached a brutal stalemate. By the end of 2020, the war had resulted in 233,000 casualties, both directly and indirectly caused by the war.  Of this estimate, approximately 3,000 deaths have been children. Additionally, much of the Yemeni population has been displaced by the war, with the UN estimating over 3,154,572 Yemenis being internally and externally displaced. Still, the war rages on.

Sixteen million people are on the brink of starvation and few seem to be paying any attention to this crisis. In fact, most Americans know next to nothing about Yemen or the war. So, why is it that the American media is neglecting the world’s biggest crisis? To answer this question, it’s important to first understand how much coverage (or lack thereof) the crisis has received.

In 2018, The Rolling Stone reported that MSNBC had gone over a year without mentioning the conflict even once, despite an increasing number of atrocities committed. This silence was starkly juxtaposed with their coverage of other “important” news matters, such as the 455 segments they aired about then-President Trump’s affair with Stormy Daniels. In that same year, Saudi Arabia dropped a bomb on a school bus full of Yemeni children, some as young as six. The total death toll was 51 people, 40 of whom were children under 11. To make matters even worse, one report estimates that mainstream American media outlets have collectively aired a total 92 minutes of coverage on the conflict since it began back in 2014. 130,000 dead, and the American media has mustered up 92 minutes of coverage for the innocent people that have been lost to this war. One can’t help but ask, is that all Yemen is worth? Is that all these children—whom the war robs of their childhoods, their lives, every day—are worth? 92 minutes?

Some have tried to explain away the complete negligence of the media by arguing that this is simply an accessibility issue, rather than a lack of concern. The argument is essentially that Yemen is too difficult to report on. Journalists are supposedly required to obtain permission from either the Houthis or the Saudi Arabian government in order to get access to the country. Yet, crises in Syria and Iraq receive countless coverage despite being ranked as the two most dangerous countries for journalists to report in. Furthermore, this line of reasoning seems incredibly flawed and falsely implies that if a certain issue is difficult to report on, it simply doesn’t need to be covered at all, when the opposite is true. The lack of media accessibility in Yemen should raise even more concerns amongst the journalistic community and encourage increased efforts to get answers regarding the ongoing crisis.

American Culpability and the Neglect of Colored Bodies

While there is absolutely some validity to the argument above, it is perhaps even more important to note the role the United States has played in enabling this horrific war. Remember that bomb that killed dozens of schoolchildren? That bomb was American made. Produced by Lockheed Martin and sold to Saudi Arabia as one of the thousands of weapons the United States supplies them with annually as part of the country’s multi-billion dollar weapons deals with the kingdom. In fact, as the world’s largest weapons importer, Saudi Arabia imports nearly 73% of its arsenal from the United States.

This figure includes a 130% increase in weapons imports during the first five years of the Yemen war (from 2015-2019). In Yemen, Saudi Arabia has deployed US made cluster munitions (which are banned by international treaties), dropped countless different models of bombs from companies such as Raytheon and Lockheed Martin and even received military support with in-air refueling of warplanes. To this day, members of the US military train the Royal Saudi Air Force. The severity of American involvement can be summarized by Yemeni doctor Ali Al Motaa’s statement:

While weapons sales and overall American military assistance have raised concerns amongst some American politicians, there still has been little action to decrease the amount of weapons being sold to the kingdom every year. In fact, US involvement in escalating this war has been a bipartisan effort, with both Democrat and Republican presidents choosing to maintain support of the Saudi campaign. Some experts argue that the United States had the potential to end the war altogether back in 2015, by simply ending military and intelligence aid to Saudi Arabia. In fact, former President Obama’s military commander cautioned the administration against involvement in Saudi Arabia’s Yemen campaign. Despite this, the Obama administration went on to provide years of military resources and intelligence information for the kingdom. A similar trend followed under President Trump, who went as far as to veto a bill that called for ending US involvement in Yemen. Instead of efforts to preemptively end this war, the United States has consistently contributed to its escalation.

The lack of American media coverage starts to make more sense when examining the role the US has played in dragging out this conflict. There is a clear lack of desire to draw any sort of attention to American culpability for the precarious state Yemen is currently in. Across the political spectrum, the American media has no incentive to report on the Yemeni crisis. From the very beginning of the war, liberal and left-leaning media outlets were at a disadvantage for reporting on Yemen, as doing so would mean condemning a president from their own party. Conservative leaning media outlets, such as Fox News, also lost their ability to point fingers at the left for the situation in Yemen when Trump chose to pursue similar policies. Rather than holding politicians and weapons manufacturers alike accountable for their actions, the US media would rather pretend the conflict does not have any relevance to the nation or does not exist altogether.

Furthermore, beyond the scope of American culpability, it appears as though Yemen is simply not provocative enough to merit extensive media coverage. It does not hold the same appeal as other regional conflicts such as Iraq and Syria, where reports of terrorism and radical extremism attract significantly more attention. A New York Times article explained:

“Conflicts gain sustained American attention only when they provide a compelling story line that appeals to both the public and political actors, and for reasons beyond the human toll. That often requires some combination of immediate relevance to American interests…and, perhaps most of all, an emotionally engaging frame of clearly identifiable good guys and bad guys.”

Just as the media frequently subjects the Black community to biased news coverage, with Black people only making headlines when accused of committing crimes, it would seem as though Brown bodies in the Middle East are only news worthy when they can contribute to ongoing narratives of religious violence and terrorism in the region. When there is an obvious villain to point fingers at, instead of a murky situation in which multiple parties, including the United States itself, are responsible for inflicting suffering upon millions of civilians. It is then obvious why stories about the Islamic State conquering Iraqi and Syrian cities, beheading American journalists and destroying cultural heritage sites are far more interesting than reports of cholera outbreaks and blockade induced starvation crises in Yemen. Of course, that’s not to say that these stories about Iraq and Syria are not important or should receive less coverage. Rather, the problem lies in the exploitative nature of US coverage in the Middle East. Media outlets are quick to flock towards stories that vilify and sensationalize the region, but neglect stories of immense, avoidable suffering, such as Yemen. The reality is that such a terrorism narrative is not worth more than brown and black bodies. While they may attract more viewers and readers, these stories only present one image of the Middle East, and a toxic stereotype at that. The American media should not get to cherry pick when the Middle East is important enough to report on, when their dead are tragedies to be mourned and when they are acceptable losses, to be ignored and buried in silence.