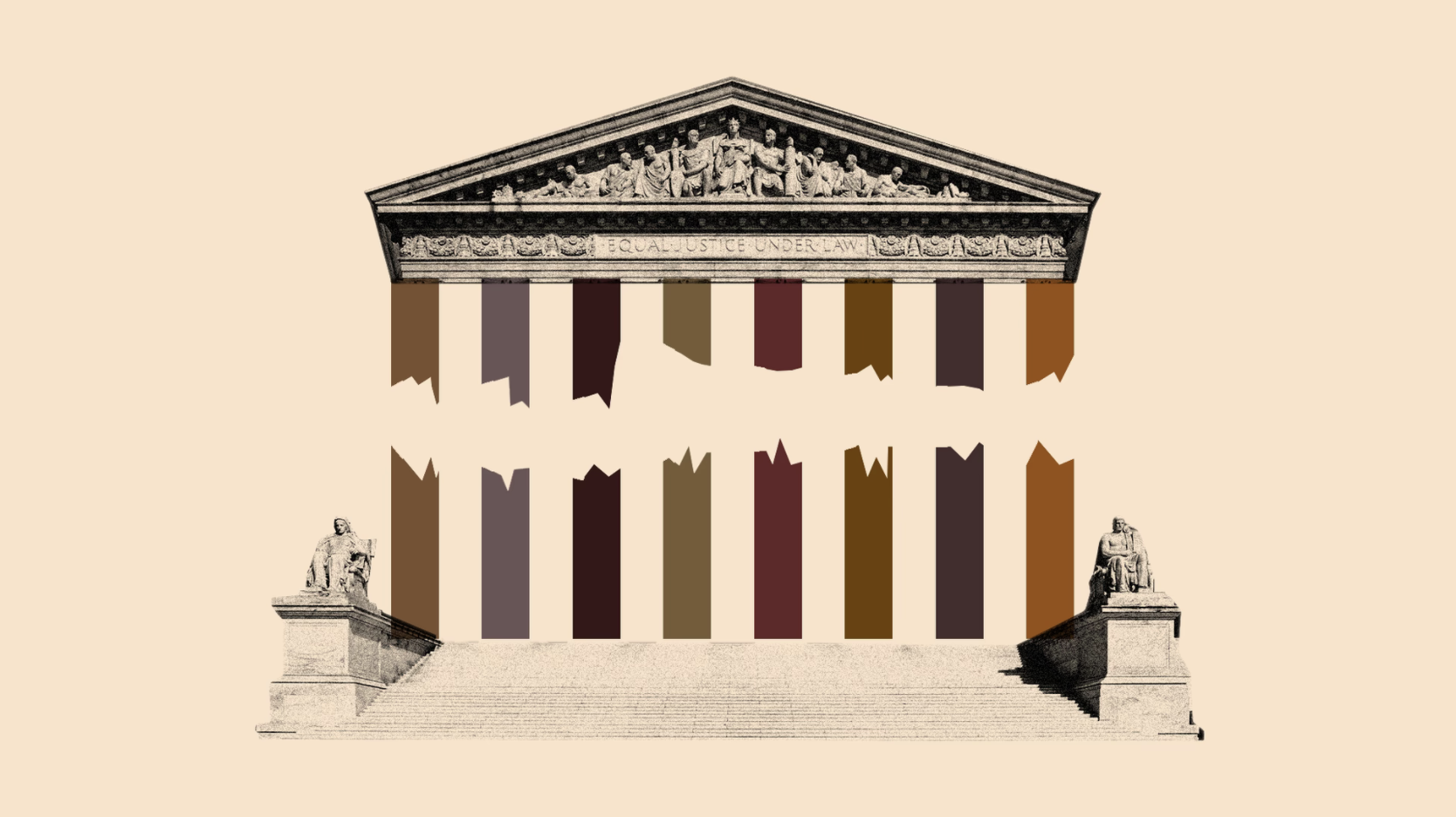 The Future for Racial Justice in U.S. Courts

Nearly one year ago, President Biden’s ascension to office alongside a Democratically controlled Senate and House brought with it a cautiously optimistic hope for legislation that could address racial injustice in the United States. However, much racial justice legislation throughout the year has been unable to withstand the pressures of partisan and intra-party divisions in Congress. Notable legislative defeats have included the George Floyd Justice in Policing Act, which did not pass the Senate in September of 2021 despite Biden’s promises to the Floyd family. In an effort to address historic inequities within Black and Latino communities who were disproportionately hit by the building of America’s interstate highway system, Biden drafted a plan to dedicate $20 billion to these communities, which was later reduced to $1 billion in order to pass his infrastructure proposal. Although Biden has been able to make some preliminary steps by passing four executive orders addressing racial justice in various realms, these steps could just as easily be overturned by the next President, just as Biden did with many of President Trump’s executive orders.

However, Biden faces another beast in the fight towards enacting truly effective racial justice legislation: the courts. In the summer of 2021, a federal program that focused on eliminating debts of Black farmers who had been impacted by generations of racism was shot down by a Florida federal judge, who held the program to be unconstitutional on the basis that it lacked flexibility and instead prompted a “categorical, race based qualification for relief.” Another significant hit to racial justice efforts was seen with the Restaurant Revitalization Fund, a federal government program which explicitly prioritized Black, Indigenous people of color as well as women for grants to aid restaurant reopening. The fund was halted by the U.S. Court of Appeals for the Sixth Circuit under the basis that the prioritization based on gender and race was too sweeping and vague. Later, a relief plan that attempted to continue the federal freeze on evictions, which primarily benefited Black and Latino families, was struck down by the Supreme Court, which said that the CDC has overstepped in its role to provide COVID relief.

While earlier, in his campaign, Biden had addressed the issue of conservative majorities in the court system by implicitly arguing for packing the Supreme Court, and post-election established a Supreme Court study panel, little impactful action has been taken by the administration in determining how to ensure racial justice legislation withstands the tests of the judiciary. However, this issue is imperative to consider when advancing legislation that addresses racial inequity through the explicit mention of race, which given the current policy goals of anti-racist advocates appears very difficult to get around.

The first step in addressing this issue is in understanding how these types of cases make their way through the American legal system. According to Larry Rosenthal, a lecturer at the Goldman School of Public Policy at UC Berkeley and the Program Director for the Center of Civility and Democratic Engagement, once it has been determined that a court can act on an issue, called “cause of action,” and the accuser argues they have been discriminated against to an extent that constitutes a violation of the Equal Protection Clause of the 14th amendment, the courts must decide on what basis the case must be classified. This comes down to three separate legal tests. Cases that involve racial discrimination are considered suspect class, in which Rosenthal states that the courts automatically apply the strictest level of scrutiny, which is “the most intrusive [level of] oversight [saved] for the most egregious of cases.” With this in mind, Rosenthal says the courts then apply the following test to legislation enacted by Congress: “the reason the legislature gives cannot just be valid, or important, but crucial. It has to be so important to society that it must be fixed through legislation. Next, the means have to be the least restrictive possible…the logic is that you cannot possibly accomplish it any other way.”

Understanding this, it is relatively unsurprising that the aforementioned pieces of legislation dedicating funds explicitly to Black farmers, as well as BIPOC and women restaurant owners, were struck down by courts. However, as many anti-racism advocates point out, historical power structures from redlining to Jim Crow and present day systems such as mass incarceration, the school to prison pipeline and the racial wealth gap continue to disenfranchise BIPOC communities. These advocates argue the best way to rectify this is by dismantling these structures and redirecting resources to BIPOC communities in order to build a truly equitable America. But, how can this kind of legislation be enacted without it being struck down under the court’s strict scrutiny test?

In considering this question, Rosenthal advocates for “establishing, all the way up to the highest levels of judicial review, that a straightforward racial classification does not survive the 14th amendment’s” equal protection clause. By arguing that a straightforward racial classification is necessary to advancing “the equal protection of the laws” because it corrects historic and present power imbalances between white and BIPOC communities, anti-racism advocates might be able to enshrine a new path under strict scrutiny that would allow programs like the Restaurant Revitalization Fund, and looking into the future, reparations, to survive the court system.

However, arguing this type of case is likely a long shot, and would require years of building precedent through lawsuits at lower level courts, similar to Thurgood Marshall’s strategy in eliminating segregation, before it could withstand the test of the Supreme Court. Even with this work, it is entirely possible, and even likely, that the 6-3 conservative majority on the Supreme Court would reject this new understanding of strict scrutiny in a heartbeat. But, Rosenthal argues, it could be worth the labor of this method just to force the Supreme Court to grapple with this question, and enshrine in the record that “we’re right in the annals of history.”

Another option, and one that could be revolutionary for the racial justice movement, would be to pass an anti-racist Constitutional Amendment, which has been proposed by Professor Ibram X. Kendi of Boston University, a famed racial justice advocate. As Professor Kendi explains, the amendment would promote two key principles: “racial inequity is evidence of racist policy, and the different racial groups are equals.” By doing so, it would “make unconstitutional inequity over a certain threshold, as well as racist ideas by public officials.” In this way, future legislation could argue that existing inequity —  such as the racial wealth gap —  is so egregious it requires government action against it that directly supports a given racial group. It could also establish a “Department of Anti-Racism (DOA)…[that] would be responsible for preclearing all local, state and federal public policies to ensure that they won’t yield racial inequity.”

This method offers significantly more permanence and control over future court’s decision making on racial justice legislation given its explicit, affirmative nature that is not as evident in the Equal Protection Clause of the 14th Amendment. It would also assert that in order for racial justice to be achieved, there cannot just be an equal protection of the laws, but an active enforcement against racial inequity in all its forms. Of course, the barriers in enacting this type of amendment are also immense. With 49% of the country believing that the United States has “made the changes needed to give blacks equal rights with whites,” it is highly unlikely that Congress could reach the two-thirds majority required to pass this type of constitutional amendment, much less three-fourths of the states which are heavily tilted in favor of the GOP since a higher number of states (which albeit constitute a smaller population) lean Republican.

While ensuring that racial justice legislation which corrects the entrenchment of white supremacy within U.S. governmental and social structures presents many challenges, it is absolutely imperative. To continue to use executive orders, which can be easily eliminated the moment another president comes into office, is simply not enough to undo the power imbalances between white and BIPOC communities. To continue to pass legislation that grants only a fleeting moment of change only to be struck down by the court system is unsustainable and harmful. A lofty challenge lies ahead in passing racial justice legislation, but anti-racism advocates have powerful figures to look back on and build upon, who also faced seemingly insurmountable odds. In order to honor their legacy and build a future that is truly anti-racist, we must continue to push political leaders and constitutional lawyers to seriously consider the future of the judiciary as it relates to racial justice.