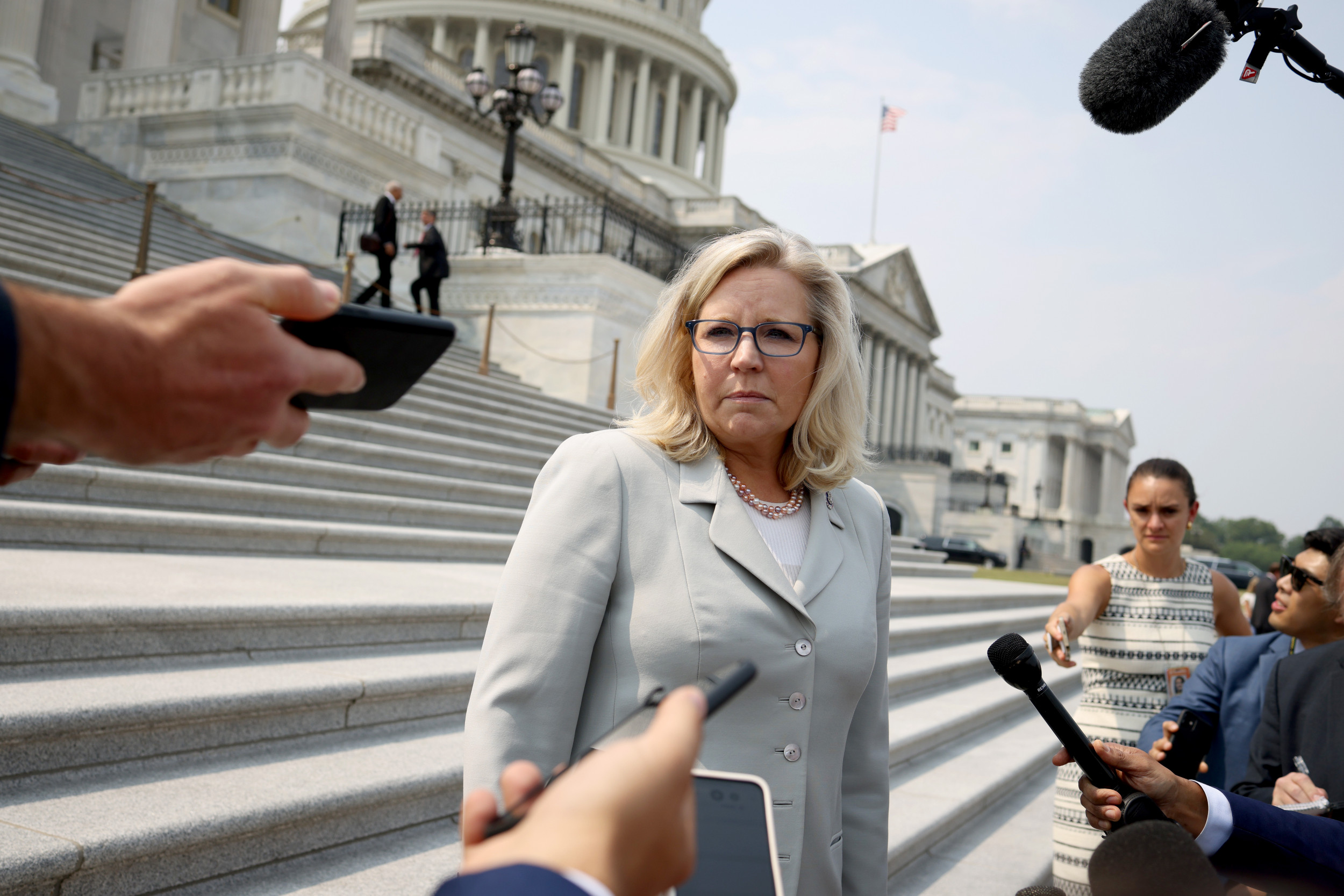 Liz Cheney is No Liberal Hero

Conspiracies, antisemitism, discrimination, insurrection— these tenets of far-right American politics have always been present and apparent, but today, more than ever before, they construct, influence, and constitute the mainstream of what was once the Grand Old Party. One U.S. Representative who stands out in a crowd of conspiracy theorists like Marjorie Taylor Greene and insurrection-deniers like Andrew Clyde is Liz Cheney, the sole delegate from the state of Wyoming. She has unexpectedly emerged as a new vocal opponent of the disgraced former President Trump. Liz Cheney is the daughter of Vice President Dick Cheney, a former opponent of same-sex marriage despite her own sister being a married lesbian, and a congressperson with one of the most conservative, pro-Trump voting records. Despite this, she has managed to garner praise from across the aisle. Democrats not only commend Cheney for her “bravery” in opposing Trump but also have donated to her 2022 reelection campaign for her current seat in Congress. Mr. Trump has confirmed that he will actively oppose and campaign against her. Cheney, unlike her father, might be able to win the trust of liberals and Democrats nationwide, but even a cursory glance at her record makes clear that Liz Cheney is not the liberal warrior many Democrats hope she is.

First, it is important for liberals to remember that Cheney represents Wyoming— the state where Mr. Trump won the highest percentage of the vote (with 70.4% to Biden’s 26.7%)— so her voting 92.9% of the time in line with Mr. Trump’s position on legislation may not come unexpectedly. Cheney’s conservative past is overlooked by her most fervent liberal proponents, but to accurately gauge what they are advocating for in supporting Cheney and her agenda, Democrats must first come to terms with her voting history.

What does Cheney support? Notably, like her father, Cheney refuses to acknowledge techniques used by the U.S. government like waterboarding as “torture.” Instead, in 2018 Cheney opted to voice support for Mr. Trump’s nomination of Gina Haspel for the position of CIA Director. Haspel operated a facility that subjected terrorism suspects to brutal interrogation techniques like waterboarding following the attacks on September 11, 2001. When Senator John McCain, himself a victim of brutal torture during the Vietnam War, cautioned that the Senate must take Haspel’s troubling record into account during her confirmation process, Cheney opposed McCain’s advice and tweeted that torture techniques “saved lives.” Liberals overwhelmingly do not support torture. So why, then, do so many Democrats praise Cheney as the protector of all that is just and constitutional?

And if her history of support for torture cannot convince Democrats of the hypocrisy of backing Cheney, her abhorrent domestic policy might. Democrats are united in their support for fair, just, and humane treatment of immigrants. The American Dream and Promise Act, supported by the Biden Administration, would provide protection from deportation and a pathway to legal status in the United States for Dreamers, Temporary Protected Status holders, and individuals with Deferred Enforced Departure. However, Cheney, on her own website, voiced opposition to the act and decries that it would “provide amnesty for criminals and gang members,” referring to undocumented immigrants like Dreamers. While Democrats may not agree on all the nuances on pathways to citizenship or immigration reform, the party finds unity in a goal to humanize immigrants and opposes the inhumane treatment of immigrants. Liz Cheney just views them as criminals.

The congresswoman also has a history of bashing and insulting the most popular Democratic politicians that so many of the new liberal donors and supporters idolize. After lambasting Senator Elizabeth Warren’s nuclear attack policy during the 2020 Democratic Party presidential primaries, Cheney drew criticism from Senator Bernie Sanders, who noted that “taking national security advice from a Cheney [Dick, Liz’s father] has already caused irreparable damage to our country. We don’t need any more, thanks.” Cheney replied, tweeting that Sanders was only a “commie” who “honeymooned in Soviet Union” and has “daddy issues” with her father. Do Democrats supporting Cheney appreciate these accusations and insults?

Moreover, while conspiracy theories like the antisemitic Q-Anon or Trump’s constantly disproven claims of election fraud seem new to the GOP, the far-right has always warmly embraced and espoused prejudiced conspiracy theories. Notably, one of the most recent, prevalent conspiracies fostered by Republicans was “birtherism”: the racist theory championed by Donald and Melania Trump. Birthers falsely allege that the nation’s first African American president was actually a Muslim born in Kenya, and thus illegitimate due to not holding birthright citizenship. When questioned by Larry King about the birther lies, Cheney did not denounce birtherism, instead pivoting to claim that “Democrats have got more crazies than the Republicans.” Furthermore, she defended racist birthers by justifying that “people are uncomfortable with having… a president who seems so reluctant to defend the nation.” Does refusing to acknowledge the legitimacy of our first non-white Commander in Chief and fleeing from chances to denounce racism fit the social justice that liberal Cheney supporters seek?

I appreciate Cheney’s refreshing refusal to submit to Trumpism, and I wholly comprehend the appeal of a rare Republican willing to abide by the Constitution, but Cheney is doing just that and nothing more. By vocally opposing Mr. Trump and voting to impeach him following the armed insurrection, Cheney has solely abided by her oath of office; she, and even her insurrection-denying and conspiracy-peddling congressional colleagues, promised to “support the Constitution of the United States.” The problem with liberals praising Cheney is that they praise her as the exception instead of commending her as what the norm should be for the Republican Party. By praising Cheney as a maverick, unafraid to break from tribalism to courageously defend what is just, Democrats effectively give a pass to Republicans who do not do the same. The truth is that any Republican who does not emulate Liz Cheney on the most basic level is not qualified to lead our nation. If Democrats do not follow this line of messaging, then they run the danger of normalizing conspiracy theories, unconstitutional actions, and partisan coup denial as acceptable stances in the GOP.

I do not expect Cheney to be a Democrat. In fact, a healthy discourse between two healthy, functioning parties has benefited our nation. But the Republican Party of today is not the GOP typified by the seemingly miraculous deal-striking between Tip O’Neill and Ronald Reagan; Democrats can voice support for Cheney all they please, but if they donate to her reelection campaign expecting a liberal warrior who will champion progress, her appalling voting record and comments prove them wrong. Instead, Democrats seeking progress should focus their funds toward aiding grassroots, progressive campaigns, to help elect candidates without the help of lobbyists that restrict elected officials. In politics, the enemy of your enemy is not necessarily your friend. By the same token, just because Cheney has emerged as a force to oppose Trumpism, Democrats must not forgive and forget her disappointing voting record and history of tired Republican rhetoric.

After all, Trumpism and the insurrection are not new phenomena. They stem from years of Republicans like Cheney dismissing and permitting lies and bigotry; her newfound opposition to Mr. Trump does not exonerate her from culpability in enabling him. Liberal Democrats need to realize that Cheney is not the liberal they think she is, and backing her agenda is antithetical to their core, progressive values.