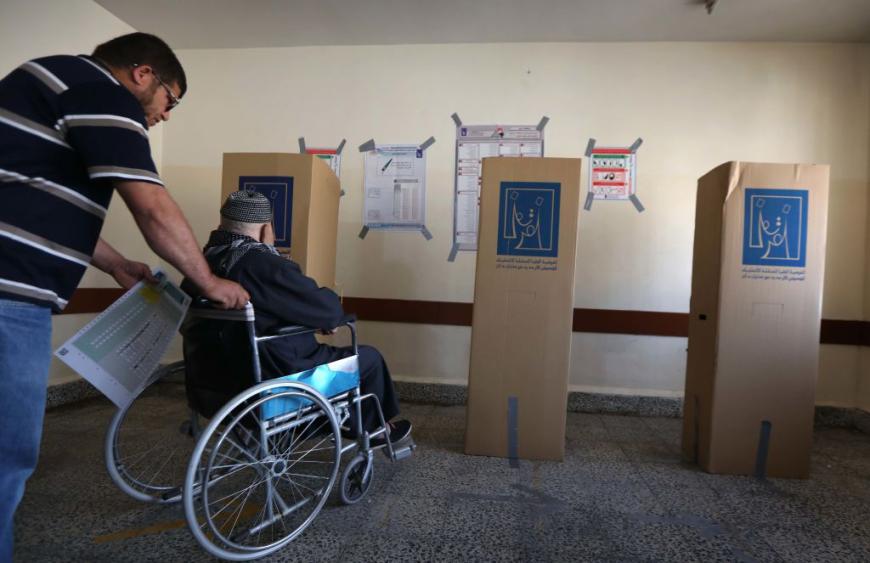 On October 10, Iraq held its parliamentary elections to determine the members of its Council of Representatives. Just prior to the elections, Human Rights Watch, based on the feedback of people with disabilities, advocated for Iraq’s Independent High Electoral Commission, or IHEC, to ensure greater accessibility at voting polls.

Iraq has one of the largest disabled populations in the world as a result of decades of war and violence, such as the battles against ISIS during 2014-2017, according to the United Nations Committee on the Rights of Persons with Disabilities. Despite Iraq’s large disabled population, most polling places are considered inaccessible for voters with disabilities. In a Human Rights Watch video entitled “Iraqi Disability Activists Pave Way to Elections,” Ahmed al-Ghizzi, the director of the Voice of Iraqi Disabled Association, described how inaccessible routes and road blocks hinder people with disabilities from arriving at polling places. According to al-Ghizzi, roads in Baghdad are closed during elections, making it impossible for voters with disabilities to be transported to polling places in cars. The Human Rights Watch report added that this is called a “vehicle curfew” and is mainly done for security reasons. Additionally, al-Ghizzi noted that many ballots are not written in Braille, making it difficult for voters with limited vision to access voting places.

Similarly, Tahseen Ali al-Saadi, another member of the Voice of Iraqi Disabled Association, said in the video that he is angry with the inaccessible voting locations, calling it a “failure” of the national government and suggests that buses need to be available around the polling places to transport voters with disabilities. In order to resolve such challenges that both al-Ghizzi and al-Saadi detailed, disability activists took matters into their own hands to combat the ableist voting structures. Specifically, al-Ghizzi explained that during previous Iraqi parliamentary elections, disability activists created a ramp on sidewalks to make transportation easier for people  who use wheelchairs. However, the city quickly removed the ramp, which al-Ghizzi saw as an act of “rejection” of people with disabilities.

In addition to the vehicle ban and lack of ramps on roads, the buildings used as voting places are also inaccessible, according to the Human Rights Watch report. Specifically, the IHEC “almost exclusively” relies on school buildings as polling places, where they are located on the second floor of buildings without elevators. Currently, there are no postal, electronic, or mobile voting stations to mitigate this challenge. In addition, electoral materials are unavailable to voters with disabilities, as they do not contain sign language, large print, audio, or easy-to-read functions.

The informational voting videos on the IHEC’s website are also not accessible for those with visual and hearing impairments. These barriers to voting are significantly affecting the rate of Iraqi individuals with disabilities who are able to  successfully vote  in parliamentary elections. In particular, when al-Ghizzi surveyed his organization, Voice of Iraqi Disabled Association, he found that only 200 of the 5,000 people with disabilities who participated in the survey voted. Furthermore, according to individuals with disabilities, disabled voters are reliant on other voters for assistance in order to reach voting places. Often, they receive help from political party members, who, at times, will attempt to influence how they vote. Thus, voting for Iraqi people with disabilities becomes a privacy issue.

The Human Rights Watch report called upon the IHEC, Iraqi Parliament, Ministry of Social Affairs and Labour Commission on the Care of Persons with Disabilities and Special Needs, Iraqi political parties, governments financially supporting Iraqi elections, and other relevant government departments of both Iraq and the UN to make physical changes to polling places and revise or enact legislation promoting greater disability rights. Their recommendations to the IHEC were that the commission should ensure transportation to polling places for voters with disabilities, disseminate information “including in Braille, large print, audio, sign language, and easy-to-read formats” containing information about political parties and instructions on how to vote, hire individuals with disabilities to work at voting places, and make it possible to vote early. Additionally, it recommended that the IHEC both establish and publicize a hotline for voters with disabilities to report undue interference regarding their right to vote, and all voting places should have at least one voting box located lower on the floor to accommodate those who use a wheelchair or have short stature. The report also recommended that the Iraqi Parliament pass a law that requires the IHEC to enact accessibility standards at voting places.

However, even though these revisions to the Iraqi voting policy may seem like small steps closer to voter disability justice, they are just that: small steps, not great strides. This is because the IHEC did not address other recommendations requested by disability activists and Human Rights Watch. In response to both groups’ recommendation that the IHEC hire people with disabilities to work at and monitor polling places and voter registration sites, the IHEC denied the requests and alleged that the tasks would be “physically demanding.”  The commission also failed to announce which voting places are physically accessible, which is important because it encourages voters with disabilities to make an effort to visit those voting locations. Furthermore, it announced that it would be unable to provide Braille ballots or accommodate individuals with disabilities for alternative or early forms of voting, even though early voting is available for other groups in Iraq.

Article 12 of the Convention of the Rights of Persons with Disabilities, or CRPD, which the Iraq Parliament has “acceded” to, asserts that state parties must “recognize that persons with disabilities enjoy legal capacity on an equal basis with others in all aspects of life.” Article 29 of the CRPD also mandates that states ensure voting places are “appropriate, accessible and easy to understand and use.” However, domestic law, such as Iraq’s 1951 Civil Code, fails to recognize legal capacity for individuals with disabilities, and those who do not have legal capacity are not allowed to vote. Interestingly, Iraq was commended by the Committee on the Rights of Persons with Disabilities for merely outlawing disability-based discrimination, as well as promoting the social integration of individuals with disabilities.