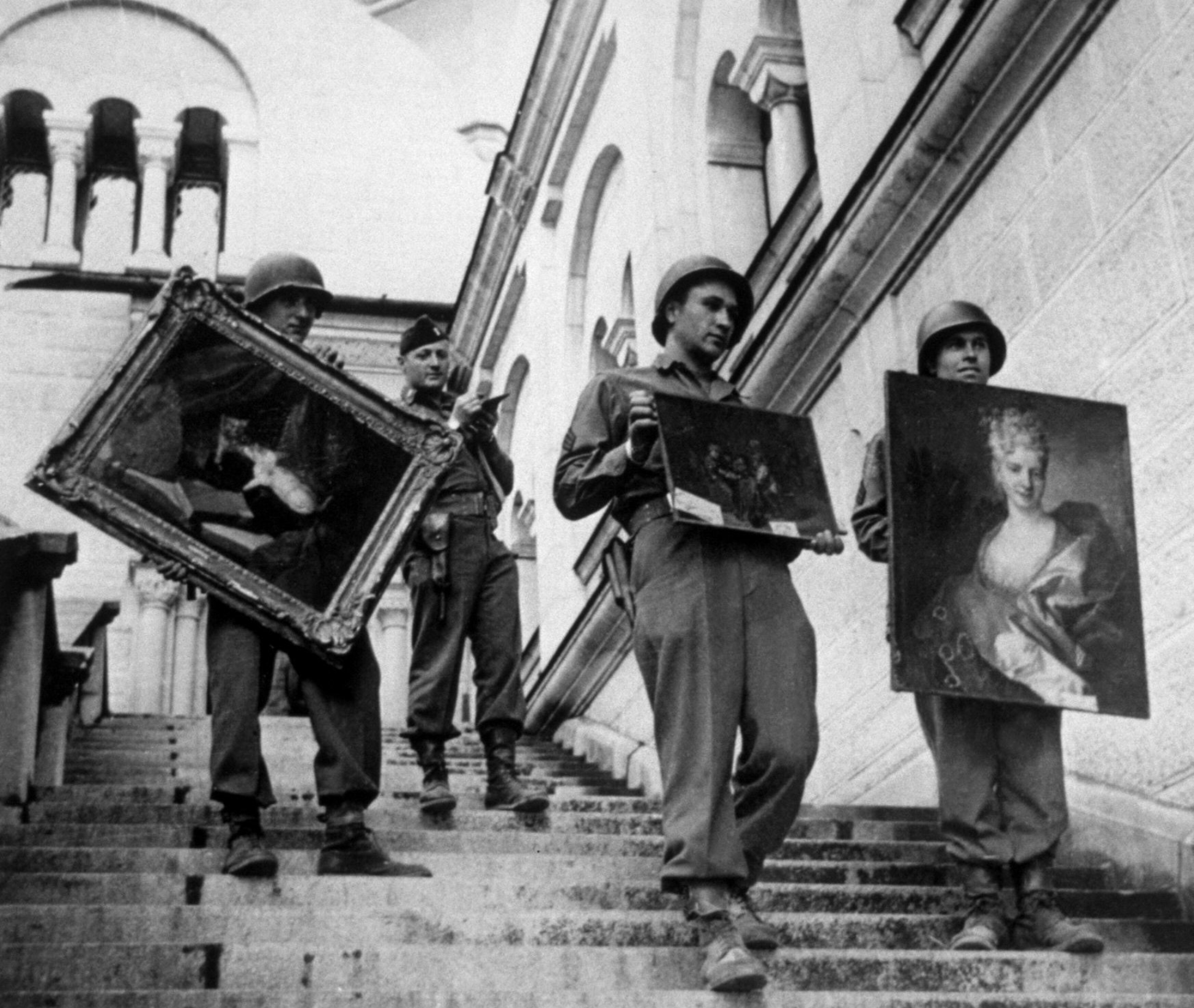 Restitution of Nazi-Looted Art: Can US Courts Guarantee Access to Justice ?

In 1942, she was only two and a half years old when she saw her mother get deported to Auschwitz’s concentration camp. A Jewish orphanage in Paris’ suburbs then took her in, and after five long years, a wonderful couple finally adopted Léone: the Meyer family, philanthropic parents with a wide collection of artwork. But the war raged on, forcing the family to flee. When it finally came to an end, Léone had lost everything: some of her extended family members, her family home, and the wonderful art collection her adoptive parents had spent years amassing. Yet almost 70 years later, one of these artworks mysteriously reappeared, hanging in the University of Oklahoma’s art gallery. Thus began the legal battle for restitution of La Bergère Rentrant des Moutons, (“The Shepherdess Bringing in Sheep”), the coveted Pissaro painting that Nazi forces looted in France during the war.

La Bergère is but one example of the long, complex Nazi-looted art cases that have arisen in the US in recent years. While there is often little doubt about the origin of the painting, restitution of the artwork is in fact a rare outcome. It often takes time, resources, and sometimes several appeals to higher courts resolve these matters — which still often end in a settlement at best. In fact, there is only a single case where the judge ordered for restitution of the looted art; the other cases were sometimes resolved by a monetary compensation made to the rightful heir, if the claim wasn’t dismissed altogether.

While there are many government initiatives in the United States promoting the return of art stolen during the Nazi era to their rightful owners, survivors’ realities are rarely so auspicious. Many claimants often have to battle in court to obtain restitution, which highlights a contradiction in our approach to the issue. Like Léone’s legal battle, there are many other interesting case studies of stolen art which have ended up in museums or art sales in the U.S. despite their doubtful origins or claims for return. To truly address our past, we must ask: how easy is access to art restitution in the US? What are the courts doing about it? And why does it matter?

Most people consider the burning of Alexandria’s library as one of the most tragic losses of cultural heritage in history, yet few people know that the organized pillaging of museums and private art owners by the Nazi regime has led to a comparable, if not superior, loss. Today, the US government estimates that Nazi officers are responsible for the loss of over one fifth of all Western art in existence at the time of World War Two. In fact, this strategic looting of art work has been described as the “greatest displacement of art in human history.”

This massive scale is due to the fact that the pillaging of artwork was carefully planned rather than an accidental byproduct of the war. Nazi leaders closely tied art itself to the views and ideals of the Nazi regime, and in 1933, the regime created the Reich’s Chamber for the Visual Arts as a subsection of the Reich Culture Chamber. Its task was simple: to confiscate artworks that opposed the regime’s worldview – the “depraved” and “un-German” artwork. They “confiscated” artwork through pillaging or through coercive contracts, initially targeting Jewish art owners, and later expanding to any museum or public institution. The Nazis intended the loot to help fill the Fuhrermuseum, a museum Adolf Hitler imagined constructing in Linz, his Austrian hometown. In 1937, the regime also showcased the “decadent” artworks within the Degenerate Art Exhibition, where they wrote degrading descriptions for each piece. Today, masterpieces by Van Gogh, Gustav Klimt, Rembrandt, Edgar Degas intended for the private museum in the making are still missing, and some of them were permanently destroyed in the conflict. However, it is also possible for Nazi-looted artwork to resurface, often having made their way to foreign art markets or museums.

The colossal scale of this art-confiscating task force, combined with the Reich’s strong interest in documentation, has led to a wide collection of pictures like the ones below; art and soldiers side by side, a surprising oxymoron and a peculiar product of institutionalized violence.

Art Restitution: When Did This Concept Emerge?

While some might expect art restitution to have become popularized in the post-WWII period,  the question of art restitution only emerged on the global stage in the 1990s and became increasingly prevalent in the 21st century. This emerging field is linked to our ability to access documents as they were declassified following the end of the Cold War, along with our growing access to technology. In that sense, digital archives and online art registries have been instrumental in facilitating the process of reporting, identifying and claiming Nazi-looted art.

The definition of art restitution relies on the Hague Convention for the Protection of Cultural Property in the Event of Armed Conflict, which clearly defines cultural property as including “movable property of great importance to the cultural heritage of every people,” such as works of art and “other objects of artistic or historical interest.” Art restitution thus focuses on the return of cultural property to its original owners or their heirs, along with reinstating the legitimacy and status of the initial owners.

A variety of initiatives in the US and in Western Europe led this effort to address art restitution, with the creation of organizations like the HARP (The Holocaust Art Restitution Project), the Nazi-Era Provenance research portal, the Art Loss Register and many more. Several museums in particular started getting involved in researching the provenance of their art work, including the MOMA’s Provenance Research Project in New York or the exhibition Concealed Histories: Uncovering the Story of Nazi Looting held in London in 2019.

Washington Principles & the HEAR Act: What is The Letter of the Law?

Following the Nuremberg trials, Western European countries have introduced a series of resolutions meant to facilitate art restitution. In 1998, the Association of Art Museum Directors met up to draft suggestions for involved institutions to address the restitution of Nazi looted art. This was the grounds on which the Washington Conference operated in 1998. 44 different country representatives gathered in Washington DC and established guidelines to facilitate restitution to heirs of affected families. The objectives of these Principles were clear: “to complete by the end of this century the unfinished business of the middle of the century,” claimed Stuart Eizenstat, who represented the United States at the conference. Resolving that prioritizing prior claims of those whose art was stolen was revolutionary at the time, taking a stance in the name of the victims.

However, the non-binding nature of the Washington Principles rendered it ineffective, as these guidelines were more a declaration of good faith than an actual legal agreement. Therefore, Obama signed the HEAR (Holocaust-era art restitution) Act in laws in 2016, intending on further supporting plaintiffs in their claiming process. This act weakened legal technicalities used by museums to keep the art, and established that today, plaintiffs have six years after discovering the whereabouts of the artwork to initiate legal proceedings. After this deadline, their claim will no longer be valid. This was done as a response to the popular “time limitation” argument, with defendants stating that the claim should have expired due to the lengthy time frame. The HEAR Act is thus a valuable new tool available to heirs on their path to justice.

While plaintiffs seeking restitution seem supported by the law, their opponent’s resources and their counter-arguments made in court often prevail.

Defendants notably use the “good faith purchase” claim to highlight their lack of knowledge regarding the artwork’s origin prior to the purchase; they believe this should absolve them of responsibility. While this is indeed an important point of view (why should museums be punished for mistakes made by previous buyers?), the general consensus is that the overarching goal of restitution must be prioritized. This is absolutely true; while restitution is considered a private property case in the U.S, it also encapsulates much more than that, bringing forth issues of collective memory and transitional justice. Agreeing with this contextual importance, judges have often overturned this argument in court, in recent years especially.

Imbalance between the players and their resources also comes into play. In the U.S., which relies on a very litigious system, this disparity means that the restitution process is rather difficult and irregular. It is also more often than not handled through settlements or extra-judicial proceedings – outside of the court. This quandary involves the “repeat player” phenomenon, which refers to the fact that actors that are often brought to court or have prior experience with the judicial system will tend to be better prepared, benefiting from better representation and legal advice.

This gulf in experience is particularly significant in the case of museums: in her article “The conflicting Obligations of Museums Possessing Nazi-Looted Art,” Emily Graefe highlights the dual roles of museums as both actors in the art restitution movement, but also as litigants against art restitution. She makes an important point; museums are indeed faced with conflicting obligations when presented with an art restitution claim. If it is legitimate, professional codes of conduct dictate that museums should negotiate with the heir and attempt to find an amenable solution. However, if the claim is invalid, turning to the courts and engaging in litigation is justified. She concludes by stating that, “if museums decide to pursue litigation when the claim is valid though, then that behavior is unethical.” However, museums often benefit from much larger funds than private litigants, and have the ability to drag on the process by appealing court decisions.

Finally, a problem with accessibility is visible when contrasting the US procedure to the initiatives put in place in Europe; in the Netherlands, the government set up a national Restitutions Committee, with a website that facilitates the claiming process. With a simple click, one can report or claim a stolen art piece, and will be guided through this claiming process, with a checklist containing the steps to follow to ensure better chances of restitution. In the U.S., the process is more uncertain and tends to vary depending on the state, the individual case, and of course the funds available to mobilize the judicial system.

On a Final Note

Overall, even the largest sums of money and the best court representation from private claimants cannot truly guarantee restitution. Despite federal efforts to promote restitution, access to litigation is not as straightforward as in other European countries, and the court highlights imbalances between different players, also allowing defendants to win on legal technicalities.

But what about Léone Meyer and her precious painting?  In the case of our La Bergère Rentrant des Moutons, the artwork’s origin was undeniable. However, after several appeals, a Supreme Court decision and a lengthy negotiation process guaranteeing shared custody of the painting between Léone and the University of Oklahoma museum, she eventually had to give up her claim. Her fight for her family’s Pissarro took five years and was finalized a few months ago, in 2021. Today, the artwork is still hanging in the museum of the University of Oklahoma, placed in a large golden frame. And if you look closely enough, you will notice a small plaque next to it. It details the origin of La Bergère, acting as a modest consolation prize for Léone and her tenuous battle for her family’s artwork…