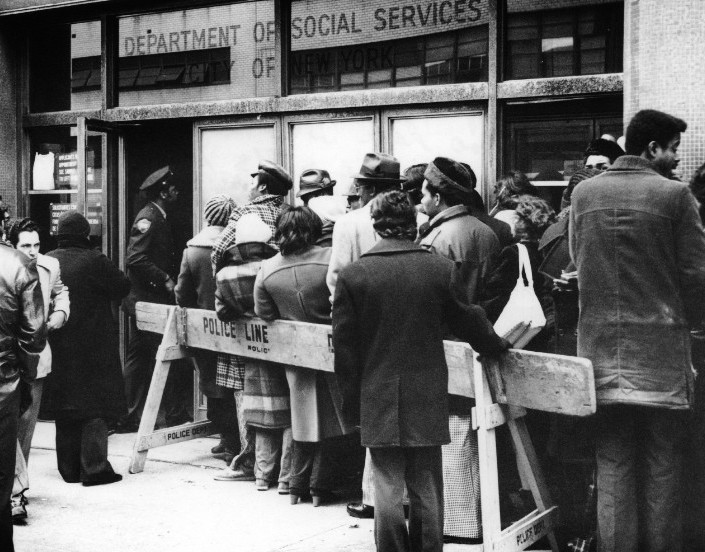 The Other War on Poverty

At the turn of the 17th century, under the reign of Queen Elizabeth I, England passed a sweeping slate of reforms aimed at alleviating poverty. Colloquially known as the Poor Laws, the legislation created a new position: overseer of the poor, two men — typically wealthy — from each parish in the nation who would administer relief. In addition to dispensing money and food, these officials played a key role in society: controlling and surveilling the lower classes in England in order to ensure the maintenance of a rigid social hierarchy. This practice eventually spread to the United States; in 1821, the infamous Quincy Report divided the poor into two categories: “the impotent poor” — considered deserving of aid — and “the able poor” — deemed unworthy of aid.

The position of overseer of the poor was formally abolished in 1831, but its legacy lives on two centuries later and an ocean away. The poor in the United States face a constant erosion of their privacy at the hands of the government. Today, when debates around privacy are often centered on national security threats and Facebook data leaks, one of the most vulnerable groups in America is left out of the conversation. A combination of forces — government legislation, Supreme Court jurisprudence, and policy administration — has rendered the right to privacy a hollow promise for the least well-off in society.

One especially acute driver of the loss of privacy has been welfare’s vast surveillance apparatus. Until 1968, nineteen states had a “man-in-the house” rule for welfare recipients, which denied assistance to mothers who were cohabiting with another male. Although such regulations were struck down by the Supreme Court in King v. Smith, their mere existence illustrates broader themes about government power. Just as the overseers of the poor in the 18th and 19th centuries determined who was worthy of help, so too did the man-in-the-house rule. Using the power of the state, the government egregiously intruded into people’s personal relationships and reasoned that those in the “wrong” kind were unfit for benefits. And, as Adam Cohen details in his book Supreme Inequality, “welfare officials saw [the man-in-the-house rule] as a tool for removing people from the rolls, especially black women and children.”

The workings of Aid to Families with Dependent Children (AFDC), a welfare program that ran from 1935 to 1997, shed further light on the ways in which the federal government deprives low-income individuals of privacy. In his 2001 book Overseers of the Poor, Ohio State Professor John Gilliom follows a number of women receiving money from the AFDC program. One mother, Mary, describes the immense power her caseworker has over her, declaring, “You have to watch every step like you are in prison.” These daily indignities reinforce the importance of privacy — most of us take for granted that we have a space free from the eyes of others. For the welfare poor, however, not only is such a zone of privacy nonexistent, the federal government can impinge on that privacy and has the power to revoke essential benefits.

Professor Gilliom’s book also documents the impact the computer revolution has had on welfare surveillance. Client Information Systems — often referred to by the acronym CRIS-E — enable the government to collect data on millions of individuals with hundreds of reference points, from their criminal history to their race to their medical conditions. These vast sums of data allow for levels of control the overseers of the poor in the 18th century could not fathom. With pinpoint accuracy, welfare administrators and case workers can take away life-saving monetary benefits to those whom they consider undeserving of help. This becomes all the more alarming in light of historian Michael Katz’s argument in his 1986 book In the Shadow of the Poorhouse. He writes, “The core of most welfare reform in America since the early nineteenth century has been a war on the able-bodied poor: an attempt to define, locate, and purge them from the rolls of relief.”

In large part, the loss of privacy for the welfare poor comes from the patchwork nature of America’s social safety net and its special focus on means-testing (rules deeming individuals above a certain income threshold ineligible to receive social services). Unlike nations who have adopted universal government programs— like universal healthcare, for instance— the United States’s complex eligibility rules in nearly every aspect of social insurance, from housing vouchers to Medicaid to welfare, result in the denial of benefits to a large segment of the population. In turn, this line of thinking justifies government intrusion into the most private and intimate spaces of people’s lives. In Supreme Inequality, Cohen quotes one welfare recipient who says, “It’s very embarrassing to me if the caseworker comes over when I have company.” From the state’s perspective, however, these erosions of privacy are imperative to determine which of those in poverty deserve money, and which don’t.

The Supreme Court, which created the right to privacy, has also played an important role in its abridgment. The current test the Court uses to adjudicate privacy violations is the Katz test, which asks if (1) an individual exhibits a subjective expectation of privacy, and (2) whether society would find that expectation to be reasonable. However, as journalist Barton Gellman lays out in a report for The Century Foundation, this test carries with it implicit class hierarchies: the courts have found that citizens have the strongest expectations of privacy in their homes, somewhat less in their cars, and even less in places of public transportation. Gellman observes, “The Katz doctrine in practice came to mean that privacy follows space,” but “unobserved space costs money.”

This enjoyment of privacy rights varies so widely based on class that in 2003 Professor Christopher Slogobin identified a “poverty exception” to the 4th Amendment, stemming from the much weaker search and seizure protections those in poverty are entitled to. One especially illustrative case is Wyman v. James (1971), in which the Court held that it did not violate a welfare recipient’s privacy rights when a caseworker searched her home without a warrant. In his dissent, Justice Marshall pointed out the dichotomy between the Court’s treatment of the poor, and that of corporations, citing the Court’s earlier decision granting business owners the right to turn away safety inspectors who had no warrant. The fact that the government can take away essential benefits without due process and can invade the right to privacy without consequence poses severe challenges for a democracy. Implicitly conditioning the protection of a right based on how much money a person makes has no place in a country rooted in ideas of self-government and equality.

Of course, no analysis of this phenomenon is complete without a discussion of race. As Dario McCarty wrote for BPR, America’s modern police state deprives people of color of their right to privacy. Howard University Law Professor Andrew Taslitz wrote in the Journal of Criminal Law and Criminology that “communities of color are policed with a far heavier hand than whiter ones.” In addition to there being much overlap between these groups— people of color and those in poverty — the obstacles Black and brown communities face illustrate that the most vulnerable in society disproportionately bear the brunt of the government’s infringement on privacy rights.

Despite these disturbing trends, a number of measures to slowly reclaim a right to privacy for the poor do exist. One such step involves traveling back half a century. In 1965, Edward Sparer, known as the father of welfare law, published a welfare recipient’s bill of rights. Fourth on this list was protection from unwarranted searches and seizures— a legal safeguard to protect a realm of privacy so many of those in poverty have lost. A slate of other reforms— the creation of universal programs, data transparency requirements for local governments, and overturning harmful Supreme Court precedent— would further reverse the decades-long erosion of privacy.

Privacy, as Julie Cohen wrote for the Harvard Law Review in 2013, is more than an empty promise. It is shorthand for “breathing room to engage in the process of … self-development,” for “creating spaces of play,” for being human. Those in poverty, however, are denied this central human dignity on a daily basis. It is well past time to reclaim this cornerstone right. It is well past time to stop the marginalization of the poor.