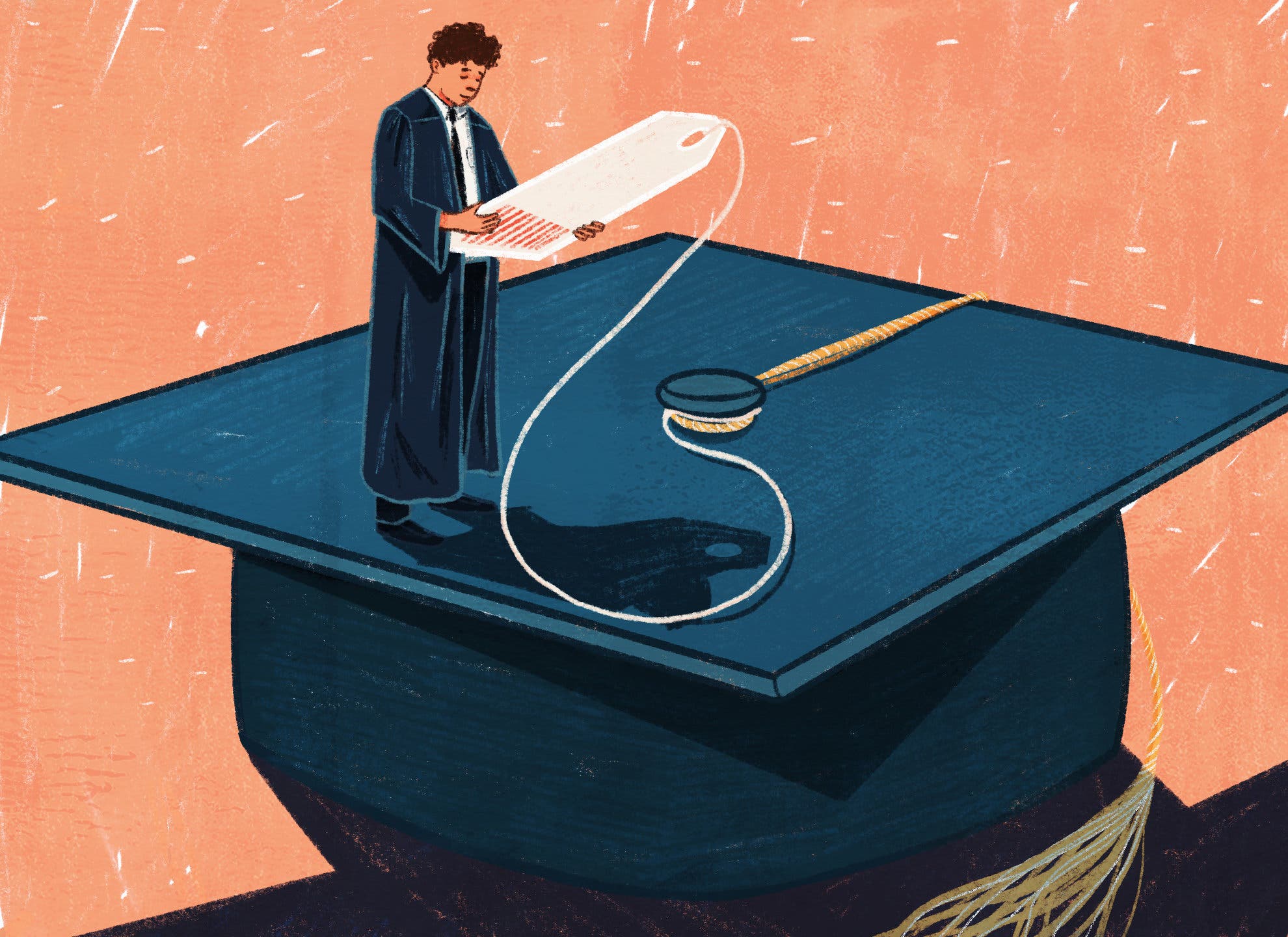 In 2019 President Biden released “Joe’s Plan for Higher Education,” detailing his intentions to help Americans access higher education easily. With almost two-thirds of Americans supporting free college tuition, Biden’s initiative attracts much intrigue and support from the majority of voters. However, his plan does not consider a vital issue in the movement—the quality of education Americans are receiving. The official Biden Harris site credits its ambitious plan to the fact that 12 years of education just isn’t enough anymore. Yet, the solution proposed ignores the flawed K-12 school system and goes straight to making a college education a necessity to make a living wage.

A public high school diploma continues to lose its value in the modern world, making many students less inclined to graduate. Our public schools suffer from severe underfunding, resulting in cut programs, elimination of classes, and shortage of teachers. They have more dropouts and fewer college applicants than their private school counterparts and have been collapsing under No Child Left Behind policies. Before our government can tackle the monetary issues of higher education, our public schools need improvement.

Over half a century ago, the right to free and equal education was solidified. Yet today, students across the country are left disadvantaged. Approximately 48 percent of a public school’s budget comes from state resources, including income taxes, sales tax and fees. Another 44 percent is contributed locally, primarily through the property taxes of homeowners in the area. The location of a school determines the level of education a student receives; living in a more affluent area provides students with access to a well-funded school that will have better technology, books and more teachers per student. Comparatively, according to the U.S Commission on Civil Rights, those in low-income areas have “low-quality school facilities that lack equitable access to teachers, instructional materials, technology and technology support, critical facilities, and physical maintenance.”

This means of funding directly and disproportionately affects children of color and those of low socioeconomic status—groups that the free college education movement is attempting to help. Despite the typically smaller size of predominantly white districts, according to an EdBuild study, they still receive 23 billion dollars more than districts made up of predominantly students of color. If the goal of free college education is to remove the systemic barriers these students are facing, why ignore the root of the problem?

The issue of unequal education isn’t just based on whether or not a district has a predominantly high or low income—many of the largest wealth gaps in education occur between schools in the same districts, varying from hundreds of thousands to million-dollar differences. One of the worst cases of these wage gaps is found in Hillsborough County, Florida, which is also one of the top ten largest school districts in the U.S. The district has approximately 220,252 students enrolled as of 2020. For comparison, the average enrollment for districts in the U.S. is 3,659 students. The county has over 60 times as many students as the national average and is the most diverse school district in the state of Florida. Despite their need for adequate funding, Hillsborough County has a $982 million funding gap and is in need of almost 500 teacher positions; the education commissioner claims the schools’ finances are at a “point of crisis.”

The highest-ranked public high school in the district has a 96 percent graduation rate and over half of students enrolled in Advanced Placement courses. These impressive statistics are far different than one of the lower-ranked public high schools in the county, which has a graduation rate of 81 percent and only 28 percent of their students enrolled in AP courses. Also, the students at the higher-ranked school score at 79 and 72 percent proficiency in reading and math, respectively, while students at the lower-ranked school are between 29 and 32 percent.

The amount of disparity within single districts is emblematic of a larger problem within our education system and must be considered when attempting to extend free education to the college level. The American system for funding free education simply doesn’t work and systematically disadvantages groups that a free college system intends to help.

Drop Out and College Enrollment Rates

The demand for a college education continues to grow, prompting the topic of free college education for all. Yet, statistical underrepresentation of the nations’ high school dropout rates and misleading information in public school college admission rates suggest otherwise.

Currently, the United States has a high school dropout rate of 5.1 percent, a misleading and generalized statistic that groups together both private and public schools. It also fails to take into consideration students leaving without earning credentials while not being classified as “dropouts.”

Notorious for the use of alternative schools as a loophole for the dropout system, Florida as a whole rarely meets its graduation rate quota. In Orange County, Florida, ALS, or Accelerated Learning Systems, ran for-profit “charter alternative” schools where, in a three-year period, 1,230 students withdrew. Similarly, 5,260 more withdrawals were reported in other ALS schools. These students were unenrolled in school without receiving their credentials yet were not coded as “dropouts.”

The worst of the issues began to surface at these alternative public high schools. According to the Education Data Initiative, “over half of alternative schools have graduation rates lower than 50 [percent].” Alternative schools in America include 7,427 charter schools, 3,484 magnet schools and a wide variety of other options including ALS schools mentioned prior.

The combination of both public and private schools into the same statistics hides the flaws of government-funded education and diminishes the demographics represented in each group. Public schools have a much larger minority population than private schools, with lower-income students five times more likely to drop out of high school. In blending all primary schools into a singular category, they seem easily comparable, which affects how college enrollment rates are seen between the two options.

Trying to find more representative data on the subject for public schools is nearly impossible with the most recent information coming from a 2011-2012 Schools and Staffing Survey, which when compared to the PSS, or Private School Universe Survey, from the same year shows the staggering difference. The survey describes that 64 percent of private high school graduates and 81 percent of Catholic high school graduates are attending four-year universities as opposed to their public school counterparts having only 40 percent of their graduates going to four-years.

However, our country lacks statistics on the total number of students refraining from even applying to college rather than simply not enrolling. Even the numbers on enrollment are skewed and contradictory—2017 data showed that only 1.9 million students out of the 2.9 million who received diplomas enrolled in colleges, and in 2018, 42.8 percent of 16-24-year-olds were not in school at all. While this provides us with a better idea of just how many total students do not seek higher education, it still doesn’t grasp the scope of public school students’ enrollment in higher education or dropout rates.

Dropout rates usually consider those enrolled in school in ninth grade but never graduate high school. In reality, students are dropping out even sooner than that. Each year thousands of students drop out of school in the eighth grade having no access to college admission resources. In California alone between 2012 and 2013 over 6,400 middle school students had dropped out of school. While the Status Drop Out Rate is 5.1 percent for the United States, this figure only includes people aged 16-24, completely excluding middle school age groups.

Because the quality of a public school depends on the income of attendees, this directly lowers students of color’s chances of attending college, applying for college, and finishing high school. This results in even more disparity in who applies and later enrolls in college. According to the Education Data Initiative, “students from the highest quintile of socioeconomic status are 50 [percent] more likely to enroll in college than those in the lowest quintile.” While many see disparity as a need for free college so more people can enroll, the free college education movement continues to disregard those who are systematically held back from college, furthering the achievement gap. Once the government starts allocating more funds to public schools, these issues of enrollment in higher education diminish.

Former Secretary of Education Betsey Devos infamously claimed that there was no connection between increased funding and school improvement. Despite being disproven by studies finding direct connections to an increase in funding leading to both decreased dropout rates and increased graduation rates, the rhetoric used by Devos frequently appears amongst many public officials.

The problem is clear and the solution is obvious, yet the largest movement for public education only focuses on the expansion of our broken system—a meager attempt towards a more educated country seemingly doomed for failure due to its broken foundation.

No Child Left Behind

One of the most consequential government policies for public schools was the implementation of the 2001 No Child Left Behind Act. What was supposed to create a system that increased graduation rates and the efficacy of public schools instead incentivized loopholes and emphasized test scores over learning.

No Child Left Behind was a strict revamp of the Elementary and Secondary Education Act that heavily enforced standardized testing. The policy took a “one size fits all” approach to every student in the nation, forcing underperforming schools to boost test scores and graduation rates through questionable means in order to receive federal funding. Methods to boost graduation rates can vary from simple credit recovery to extreme methods like the removal of students who hold schools back from their quota.

While credit recovery facades as an effective means to give students a second chance at graduation requirements, what came of the initiative only caused harm as underqualified students were forced to graduate. Reports of Los Angeles schools found that while the projected rate of graduation saw a 21 percent increase within a year, those same graduates missed more than half of the school year, and just below 10 percent had “satisfactory attendance.”

When credit recovery isn’t an option for students, schools look for other means of inflating their graduation rates, with some falling into an extreme. In 2012, Alabama schools boosted their numbers by including students who received alternative accreditation given through special education, while removing “underperforming students” from means of changing paperwork, even expelling the students as “problem students.”

No Child Left Behind made a system where the only way to receive money for education was to not educate students.

What Happens When We Fund Our Public Schools

The American education system does not foster an environment for legitimate and proper education. Public schools are responsible for much more than just educating their students: they should provide counseling for mental health, distribute food for children who need it, run after and before-school care programs, keep schools clean and hygienic and have a staff of nurses and resource officers to ensure student health and safety. More funding means more money to students who need not only higher quality education, but access to all needed resources.

There is an education epidemic in our country, and until we go to the root of the problem, it will never be fixed. We can’t move on to the next big project in hopes of promoting a more educated country when we continue to ignore why the country may lack it, to begin with.

Is this what we want a college education to look like?