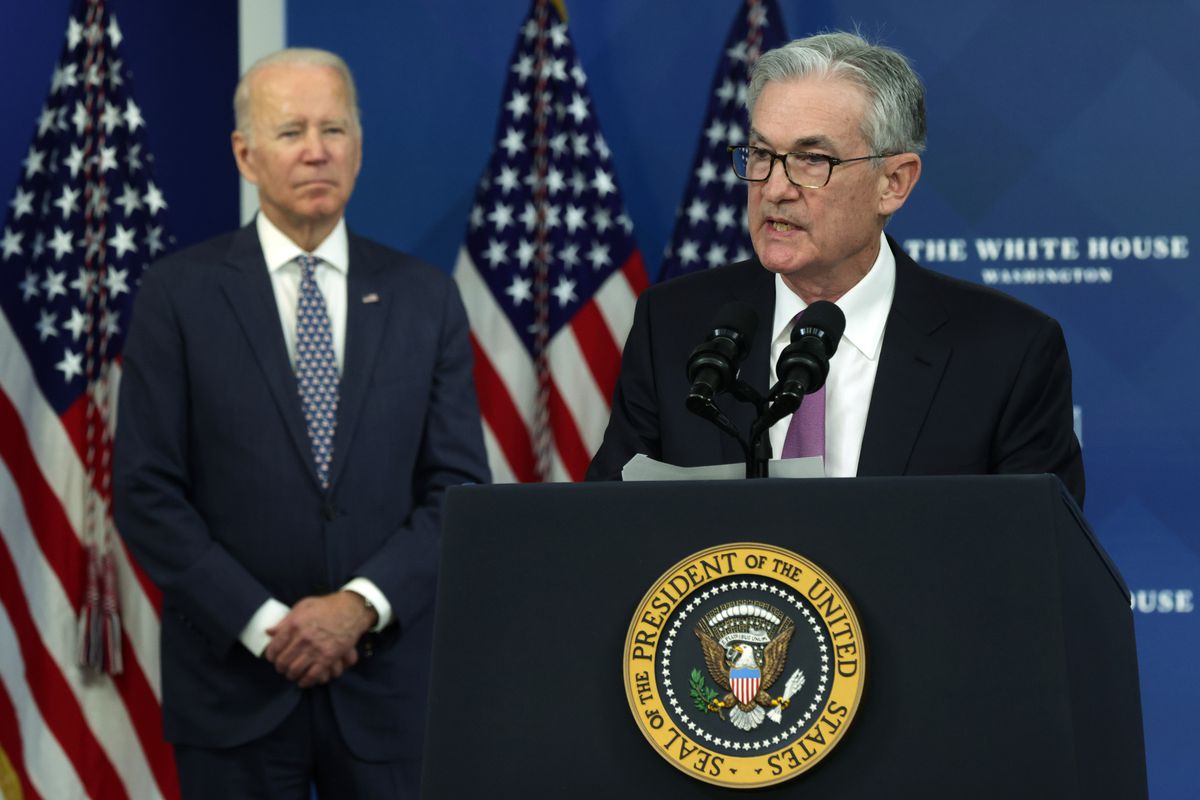 There are two ways the story of Jerome Powell’s time as chair of the Federal Reserve is commonly told. One narrative goes like this: Powell is the most progressive Federal Reserve Chair since the New Deal, a staunch advocate of worker power, and the person who stopped financial calamity during the COVID-19 pandemic. The other telling? Jerome Powell, the lifelong Republican and Trump appointee, has been slow to act on the existential threat of climate change, laxly enforced financial regulation rules, and taken action reflecting his long history in private equity firms.

Powell, who goes by the nickname “Jay,” is unique amongst heads of central banks: he’s a lawyer by trade. Having spent much of his professional career in financial services, Powell was a visiting scholar at the Bipartisan Policy Center from 2010 to 2013, where he gained a reputation as a moderate bridge-builder. At the beginning of his second term, facing pressure from Senate Republicans, President Obama nominated Powell to the Federal Reserve Board of Governors. Five years later, President Trump chose him to lead the hallowed institution.

On November 22nd, 2021, the White House seemed to favor the first interpretation of Jay Powell’s term: President Biden renominated him for another four-year stint as Fed chair, a decision drawing both praise and criticism from progressive leaders. Indeed, the two dueling stories about Powell shed light on a larger debate taking place among Democrats. Since observers often refer to the leader of the Federal Reserve as the second most powerful person in the nation, the substantive action Powell has taken — and the political reaction to his time in office — deserves careful investigation. An examination of these phenomena reveal larger themes about economic policy, political coalition-building, and the Democratic Party.

The Case for Powell

Despite Powell’s history suggesting that he would be a standard adherent of Republican orthodoxy, his time as chair has ushered in a sea change in economic thinking. The most notable example of this progressive turn is inflation. In 2020, Powell announced a new framework called “flexible average inflation targeting.” Before Powell’s reign, central bankers typically raised interest rates once prices had risen two percent or more, fearing runaway inflation. Powell’s new regime, however, analyzes the average rate of inflation, thus allowing for prices to run above the two percent threshold for periods of time.

This distinction may seem minor, but it represents a pivotal victory for liberals. Since 1977, the Fed has had a dual mandate: stabilize prices and maximize employment. The primary tool by which the Federal Reserve seeks to promote the first objective is raising interest rates — making it more expensive to borrow money. But as Eric Levitz of New York Magazine writes, when the Fed raises rates, “businesses and consumers are forced to tighten their belts, and demand for labor declines.” Because building labor power is a central plank of the Democratic Party, a Federal Reserve inclined to raise interest rates is extremely unpalatable to progressives. Indeed, throughout the Federal Reserve’s history, progressives have often criticized the institution for focusing too much on stabilizing prices to the detriment of maximizing employment.

Two key events in recent history crystallize the progressive point of view. In 1979, then-chair Paul Volcker responded to the era of stagflation by massively hiking interest rates. The move achieved the first part of the Fed’s mandate, but Volcker’s actions led to a significant recession that gutted the working class and the union movement. The reporter Jeff Spross from The Week explains, “after the Volcker recession,” the decline in union membership “accelerated, falling another 10 percentage points from 1980 to roughly 1995.”

A more recent example is the decision by Janet Yellen — the current Treasury Secretary — to raise interest rates in 2015, despite prices staying consistently below two percent. The Federal Reserve’s preoccupation with prices — even with little evidence supporting the specter of hyperinflation — created a mini-recession. While Yellen’s rate hike was much smaller than Volcker’s, its political consequences may have been just as big. The dip in the economy was concentrated disproportionately in the Midwest in 2016, leading some observers to conclude that a Federal Reserve led by a Democrat had accidentally contributed to the election of Donald Trump.

Which brings us back to the Powell puzzle. Despite his Republican bona fides, Powell’s repeated refusal to increase interest rates, even in light of higher prices, is a significant argument for his renomination as chair. By keeping rates low, Powell’s monetary policy has created an environment where workers have increasingly more power over businesses. To Powell’s advocates, replacing the architect of this paradigm shift risks squandering much of the progress policymakers have made from the days of 1979.

Moreover, the debate around inflation is not only an economic issue; rising prices for American families present a political headwind for the Biden Administration. During this period, then, having a Federal Reserve chair with noted support from Republicans helps neutralize a line of attack. The argument from Republicans that the Biden Administration and its acolytes don’t care about inflation falls flat when the leader of the institution charged with overseeing the issue is a Republican himself — and one who 84 senators, many of them Republicans, voted for.

The other main area where Powell draws acclaim is the Federal Reserve’s response to the COVID-19 pandemic, which has garnered praise from conservatives and progressives alike. Undertaking a massive bond buying campaign, the Federal Reserve spent $2.3 trillion in support of the economy. The swift action in unprecedented times and his willingness to “run the economy hot” led to bipartisan applause for Powell. So too has a number of other statements he’s made, such as speaking in favor of expanded childcare in order to empower women to be more equal participants in the workforce.

More concretely, Powell’s actions in favor of full employment are critical to achieving racial justice: with a tight labor market, workers of color have more power, and businesses have less opportunity to discriminate. Indeed, a pro-worker monetary policy was a key political objective of Martin Luther King, Jr. Integral to Dr. King’s dream was the idea of a job for everyone who wants one; absent Congressional action, the Federal Reserve maintaining its focus on achieving full employment is one of the best ways to achieve his vision.

The Case Against Powell

The other story of Jay Powell revolves around what he hasn’t done, namely regulating financial institutions, alleviating racial inequality, and responding to climate change. Even in response to COVID-19, liberal economist and Nobel laureate Joseph Stiglitz wrote, “any college sophomore would have known not to tighten monetary policy… during a recession.” In addition, numerous observers contend that while Powell may have been the head of the Federal Reserve, the shift in monetary policy was led by Lael Brainard, a Fed Governor who President Biden recently nominated to be Vice Chair.

Banking regulation may be the area of greatest concern to progressive critics of Powell. He has spoken in favor of deregulation, and endorsed President Trump’s 2017 bill that loosened rules on banks. It is for this reason that Senator Elizabeth Warren labeled Powell a “dangerous man” in November of 2021.

A growing group of activists also believe that Jerome Powell hasn’t gone nearly far enough in responding to climate change. For instance, the Federal Reserve has declined to incorporate climate risk into its “stress tests” of financial institutions. The international environmental organization 350.org released a list of demands for the Federal Reserve in August 2021, including limiting the financing of carbon emissions, aligning the Federal Reserve’s action with the Paris Climate Agreement, and pushing banks to invest in communities of color. This third demand feeds into a final critique of Powell: a failure to address racial inequality. According to the financial organization Better Markets, the Fed could “leverage existing laws such as the Community Reinvestment Act” to respond to racial disparities in access to credit. Some progressive economists wish for the Fed to go further than a general push towards full employment; in 2020, Jared Bernstein, one of President Biden’s top economic advisers, wrote that “the Fed should consider targeting not the overall unemployment rate, but the Black rate.” The lack of action in each of these areas forms the basis of progressives’ desire to replace Jay Powell.

Where Does All This Leave Us?

Undergirding President Biden’s decision to renominate Jay Powell is the immense difficulty in achieving a pro-labor monetary policy. Because the Federal Reserve’s actions in this realm are so important to achieving the vision of a larger liberal project, the case for Jerome Powell ultimately won out. As for Powell’s deficiencies, the White House can address them through other means: the elevation of progressive policy makers to higher ranks within the Fed and fiscal action to address the climate crisis, for example. All of this leaves one thing clear: Jerome Powell — the consummate Republican insider and accidental progressive champion — has become President Biden’s man for this moment.