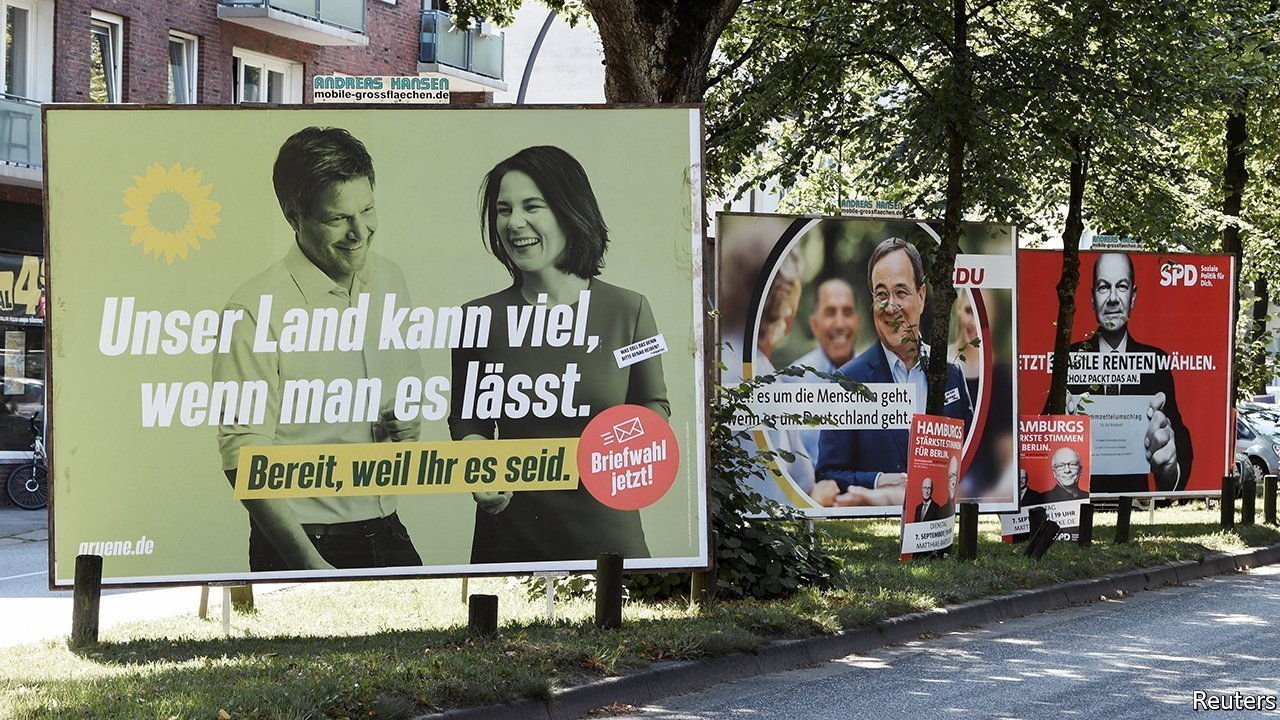 Changing Climate, Changing Politics: the Presence of the Environment in Germany’s 2021 Election

Germany doesn’t elect its leaders based on charisma. Descriptions of Angela Merkel, like many adjectives thrown around German affairs, consist of stoic, calm, and unemotional, both in her politics and her public presence. Part of this is due to Germany’s political system, one in which the charismatic, ceremonial head of state, the president, is an entirely separate role from the pragmatic head of government, the chancellor. Other roots lie in the political culture where stability is more trustworthy than passionate leaders interested in change, a remnant of Germany’s ever present history. Still, other factors reside in Merkel’s undeniably successful fight to be taken seriously as one of the most powerful women in the world. Regardless of the reasons, Merkel’s 16 year reign of unemotional and relatively uneventful politics served as a model for Germany’s chancellor hopefuls as they carefully developed their images and their campaigns. Yet as Germany’s many candidates for chancellor sought to connect with voters in the campaign season leading up to the late September elections, it soon became clear that emulating Merkel’s beloved, boring character would not be enough to win her coveted seat.

As Germany prepared for the unthinkable shift into a post-Merkel era of politics, the leading candidates for future Chancellor made clear efforts to prove that they would ensure a smooth transition in both Germany’s politics and global image. The candidate from Merkel’s own party, Armin Laschet of the Christian Democrats (CDU), leveraged the fact that keeping the chancellorship in the same party would promote the most stability. The likely winner of the chancellorship, Olaf Scholz of the Social Democrats (SPD), repeatedly paid homage to his expertise and connections as Merkel’s Vice Chancellor, with slogans, speeches, and even gestures so similar to Merkel’s that competitor Laschet accused him of trying to be Merkel. Even the politicians hoping to shake the status quo with ambitious platforms relied on Merkel-inspired professionalism. Young centrist Annalena Baerbock, the candidate of the historically-radical Greens, was chosen over the popular, enthusiastic Robert Habeck of the progressive side of the party, a move due to both the Greens’ desire to pick up moderate votes and the need to present a candidate who doesn’t stray too far from Merkel’s pragmatism.

Still, despite the efforts from candidates of all parties to create an election based on stability and a smooth shift away from Merkel’s long-term reign, an unshakable source of change got in the way: climate change.

Just as the election season was heating up and campaigns went into overdrive, the summer months brought intense weather events across the world, and Germany was not spared. As wildfires scorched the Balkan and Mediterranean states in southern Europe, Germany, the Netherlands, and Belgium were hit by massive rains and consequent flooding that led to over 220 deaths. About two months later, on September 10, a poll by a German public broadcast found that the environment and the climate were the most important issue in the upcoming election for 43 percent of respondents.

Merkel was no stranger to environmental politics, with the German press even calling her the “Climate Chancellor,” but the environment was far from the top of her party’s priorities. At times, the Christian Democrats even rejected Merkel’s goals for emission standards and other climate targets, though their 2021 election platform remained committed to expanding renewable energy and phasing out coal plants by 2038. Germany’s other parties, with the exception of the climate-change-denying, far-right Alternative for Germany (AfD), all included environmental goals prominently on their platforms. Germany’s likely next government, consisting of the center-left Social Democrats; the liberal, pro-free-market Free Democratic Party; and the Greens, all contain platforms with relatively ambitious climate goals reflected in the dominance of environmental issues in the current coalition discussions. Nonetheless, despite the public’s declaration that climate change is a priority, and the recognition from almost all parties that the environment needs to be near the center of their platforms, no candidates were able to take off with momentum from the climate disasters. In fact, many made things even worse.

For a group of candidates searching for ways to prove they can fill Merkel’s impossibly large shoes, the floods should have been the prime opportunity to take on Merkel’s famous role as the calm “Crisis Manager.” This is precisely what has happened in past flooding crises. Helmut Schmidt’s crisis management and coordination of response teams in the Great Flood of 1962 launched his image from a local city-state senator to a widely recognized politician, helping him move into the federal government and later hold the chancellorship. In 2002, images of incumbent Gerhard Schröder in rubber boots at ravaged flood sites launched him back into the chancellor seat, despite having a struggling economy that left him trailing in the polls.

While several candidates went out to the affected areas to oversee damage and make statements, none successfully portrayed Merkel’s, Schmidt’s, or Schröder’s image of a pragmatic hero in times of crisis. The least successful was the candidate of Merkel’s own Christian Democrats, Laschet, who was caught on video laughing as President Frank-Walter Steinmeier gave a serious statement to reporters about helping flood victims. This video went viral, creating a hashtag on Twitter, and resulted in an immediate drop of five percent in Laschet’s popularity in polls on voters’ preferred chancellor candidate the following week. Meanwhile, the Greens chose to not emphasize any connection between the floods and its climate campaigns, hoping to avoid the existing narratives of the Greens as an overeducated, scolding, ‘told you so‘ party. While chancellor candidate Baerbock did visit affected areas, she did not take TV crews with her, nor did she speak to reporters, hoping that voters would instead make the connection to floods and the Greens’ platforms on their own. Meanwhile, despite the party’s careful efforts to not politicize the floods, a Greens delegate made a tweet that showcased flood damage, criticized other parties’ lack of commitment, and promised only the Greens would prioritize climate action. It was deleted, and an apology released, in less than 24 hours. The most successful of the top three candidates was likely Scholz of the Social Democrats, who leveraged his current position as the Minister of Finance to promise that funding for repairs would be made available. While he was criticized at the time for being unable to emotionally connect with voters and only saw a polling increase of one percent, he is likely to be the next chancellor.

The floods made clear that no politician has yet mastered Merkel’s careful balance between leading without politicizing and exhibiting stoicism without insipidity. While Germany’s current image as a trustworthy political and economic partner is unlikely to undergo massive change in the ensuing years, it would not be an exaggeration to say much of Germany’s positive image comes from Merkel as its leader. Over her 16 year reign as chancellor alone, she built up undeniable power and respect, a fact made evident in tributes to Merkel by European leaders as they bid her farewell in the most recent summit in Brussels. Merkel was compared to “a monument,” a “great politician” and “great European,” a “compromise machine” and a “source of wisdom” to be missed in “delicate times.” The President of the European Council even added that future meetings without Merkel representing Germany will be like “Rome without the Vatican or Paris without the Eiffel Tower.” While the likely future chancellor, Scholz, tried to emulate Merkel’s stoicism and pragmatic nature in the entirety of his campaign, his “robotic demeanor” prevented connections with voters and does not bode well for maintaining such an elevated view of Germany by Europe and the world.

Scholz’s political experience and wisdom from working alongside Merkel as Vice Chancellor will aid in Germany’s desired stable shift to a post-Merkel era, but this summer’s events also showed that stability, even in Germany, is under immense threat from climate change. The painful reality presented by Germany’s candidates, three of whom will likely end up in the future coalition government, in their inability to formulate respectful, pragmatic responses to the floods exposed the uncertainty and unpreparedness with which even experienced politicians are facing as part of the  changing government and changing climate. While natural disasters have presented opportunities for displays of charisma and leadership, or, alternatively, of immaturity and inappropriate politicization, the increased frequency of these events as a result of climate change presents a clear need for politicians everywhere to figure a careful response.