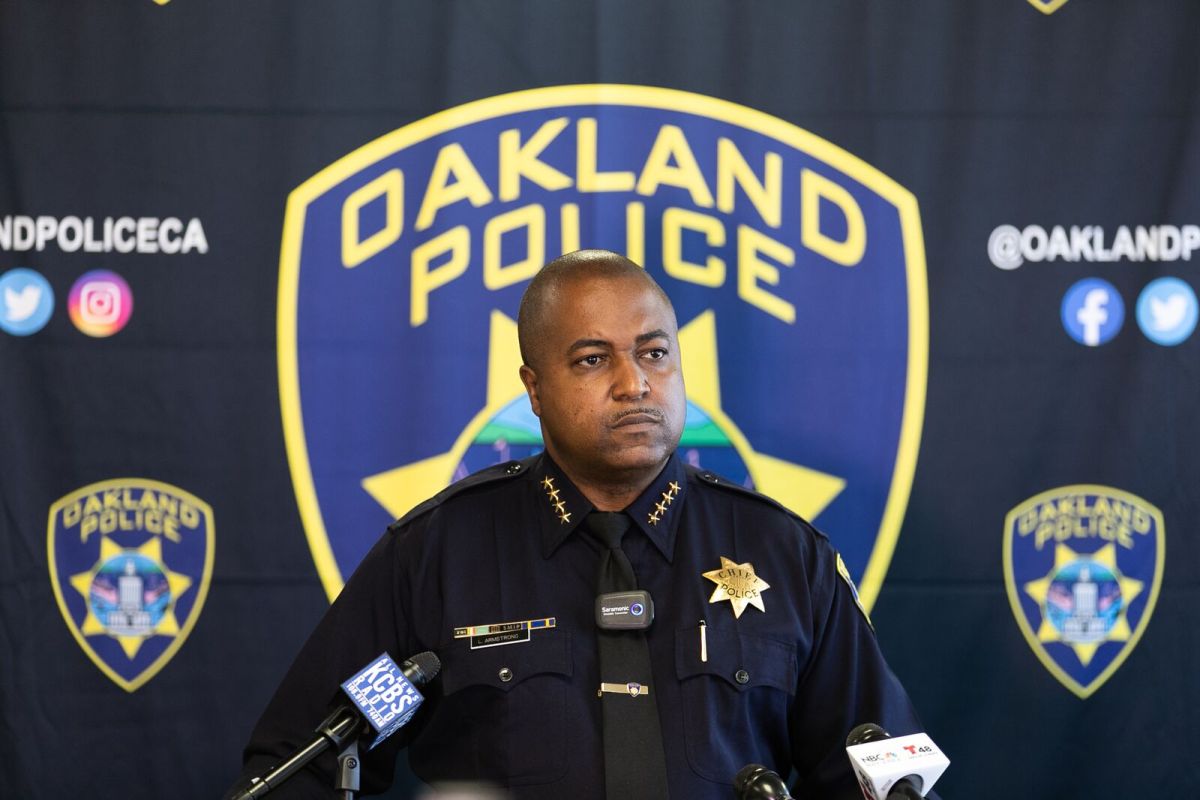 On Tuesday, September 21, 2021, Oakland’s city council approved the implementation of a fifth police academy. This decision came after the city experienced its 100th homicide of the year. The measure passed with a 6-2 majority vote, with council President Nikki Fortunato Bas and council member Carroll Fife voting against the measure. Both Bas and Fife suggested other solutions, such as “investing in violence interrupters, mental health services…” or “quadrupling the number of dollars going into prevention.” Against the backdrop of the Black Lives Matter movement , both in the city of Oakland and nationwide, these city council members and many residents question if more officers on the streets is the right response to rising violence.

The proposal to fund another police academy in Oakland was brought to  the Oakland City Council’s attention just three months prior to the council’s September session. Initially, City Council members rejected this idea, asserting that resources and aid would be better concentrated in violence prevention and outreach programs. Prior to this, the City of Oakland was experiencing a shift away from conventional policing, offering residents the opportunity to take part in outreach programs to protect the city.

One such program, Mobile Assistance Community Responders of Oakland (MACRO), even began transferring calls from 911 to “trained civilian responders.” Members of MACRO would deal with certain community issues, such as “mental health crises and public intoxication.” According to Vice Mayor Rebecca Kaplan, MACRO would eliminate the tragic trend of sending “armed police officers… to deal with people involving cases like mental health or homelessness–” instances where these troubled individuals often end up dead at the hands of the police. The program, as an alternative to policing, operates seven days a week, “with three teams that each include an EMT and a case intervention specialist.” In its conception, MACRO was tested in communities that were deemed most vulnerable and underserved. As of now, the City of Oakland is accepting applications in order to implement the program citywide. Although MACRO is still fairly new, residents frustrated with Oakland’s Police Department are witnessing real change. Oakland native, and UC Berkeley student, Elliot Masouredis, understands MACRO as having the right “substantive aim” when it comes to dealing with police misconduct. He states, “I am super supportive of the idea of MACRO, and its aim to mitigate potential police violence by removing them from areas that they don’t have to deal with.”

However, noticing a substantial increase in crime rates from last year, Oakland’s Police Officers’ Association President Barry Donelan attacked the city’s limited, unconventional response, arguing that more officers are needed to combat the rising violence and “bloodshed [witnessed] on the streets.” In response to the Oakland City Council’s previous rejection of a fifth police academy, Donelan stated, “how about this strategy: support your hardworking police officers and act against violence.” Some residents of Oakland have sided with Oakland’s Police Department (OPD) and Police Association, similarly arguing for more police officers on the streets.

While Association President Donelan’s demand for more police officers has been situated as a response to increasing city violence, his request also financially supports the Oakland Police Department. Measure Z, a statute enacted in 2014, requires “police staffing [to] remain at a certain level.” If Oakland’s police force falls below 678 officers, the Department runs the risk of losing tax and parking revenue usually funneled into “crime prevention programs.” Oakland Police Chief LeRonne Armstrong further articulated the institutional interest in increasing officers on the streets, arguing that more police academies will help to “fill the gap” as more Oakland officers are leaving the force.

In a Police Commission meeting on Thursday, two days after the city council’s meeting, Chief Armstrong assessed the recent significant decline in police officers, pointing to criticism from Oakland community residents as the driving force behind Oakland’s officer shortage. According to Armstrong, officers on the Oakland force withstand “constant criticism” and feel as though no other city “faces the same criticism that they face.” But Masouredis, the aforementioned UC Berkeley student, argues that there are in fact likely some good cops who “probably just get jaded, because they join [the department] and are immediately blindsided by all these people that hate [them], but they don’t hate [them], [these residents just] hate the past officers that wronged them.” Speaking from experience, Masouredis, who has had his own confrontations with the Oakland Police Department, stated, “it’s not like this [hatred] isn’t warranted.”

Many Oakland residents, on the other hand, are wary to accept help from the Oakland Police Department. For decades, the Oakland Police Department has struggled to build trust between itself and the community, as the department has been under fire for issues of police brutality and misconduct practically since the development of Oakland’s Black Panther Party in 1967. Less than a decade later, one of Oakland’s officers shot and killed community member, Jose Barlow Benavidez. His death sparked a series of protests which worked to fight back against the department’s excessive use of force. According to several members of the Benavidez family, the Oakland police continued to harass “eyewitnesses to the Benavidez slayings.” In 1979, two officers shot an Oakland teenager, Melvin Black, which spurred a deep investigation into the department and its policies. Most recently, the City of Oakland experienced a wave of major uprisings in response to the death of Minneapolis resident, George Floyd. Having grown up in Oakland, Masouredis was unsurprised by the city’s activism. “There is something special about activism in Oakland that would incline it to have a protest for Floyd,” Masouredis states.

But these instances only scratch the surface of the complex, troubling relationship between the department and community. In fact, in 2003, the Oakland Police Department was put under federal oversight after multiple allegations of police brutality and civil rights violation issues surfaced. The department has been monitored by a federal judge for more than 18 years now. A group of Oakland officers, known as the Riders, were specifically called out for their dehumanizing and brutal approach to policing. It was only in August of this year that two civil rights attorneys called for a possible end to the current oversight. These attorneys, Jim Chanin and John Burris, noted that the Oakland Police Department has recently made “significant progress and after years of backsliding there is real momentum toward substantive compliance.” Full compliance, however, has not been achieved. Some Oakland residents strongly oppose the lifting of Oakland’s federal oversight. In an interview with ABC7, Cat Brooks, Co-Founder of the Anti Police-Terror Project, stated “…as Oaklanders that have to deal with the OPD every day, [why not ask] how they feel. I guarantee you they are not going to agree [with lifting the oversight].” As of now, the Oakland Police Department still has failed to come into compliance with five out of the fifty-two tasks assigned to them under this federal mandate. These five areas include: “completing internal affairs investigations within a required time frame, internal affairs complaint procedures, use of force investigations, tracking who OPD officers stop and why and consistency of discipline against OPD members.” If lifted, however, the federal oversight would not stop immediately. The department would be required to undergo a “one year sustainability period… to prove that the reforms can last without the intervention of outside authorities.” Nonetheless, many residents are concerned with lifting the oversight too soon.

Besides the last five tasks left for the OPD to tackle in order to be in complete compliance, one issue still remains. Currently, the department is undergoing an internal affairs investigation concerning “racist and sexist Instagram posts” connected to an “account believed to be run by one or more Oakland police officers.” These posts, on the account @crimereductionteam, glorify police brutality and make fun of or denounce “requirements that officers report when they use force against people.” Some posts even included extremely graphic, sexual imagery. Oakland Police Department’s Intelligence Division Sergeant Kathryn Jones has been investigating the account, but has little knowledge of who is behind it. After sending out a mass email to the entire department, the Instagram account posted an image with the attached caption that referred to the “department-wide email about us.” The investigation is ongoing.

In spite of all this, Oakland’s city council has planned to move forward with the implementation of a fifth police academy. But with all things considered, increasing the number of police officers on the streets may not be the wisest choice for the city of Oakland. Oakland’s history paints a pretty clear picture of the troubling issue at hand: how to encourage police accountability and how to build trust between Oakland’s police department and the community? Although this sentiment has been repeated time and time again, it is important to understand that the police are agents for the people. Their job is to protect and serve. What is to be done when they are criminalizing and brutalizing the very people they are supposed to defend?

Ava is a writer for the California section. She has a special interest in social justice work and policy reform. Ava is an American Studies major here at UC Berkeley with a concentration on Race, Politics and Public Policy in the United States. Ava loves to travel and her favorite place to go so far has been Berlin!