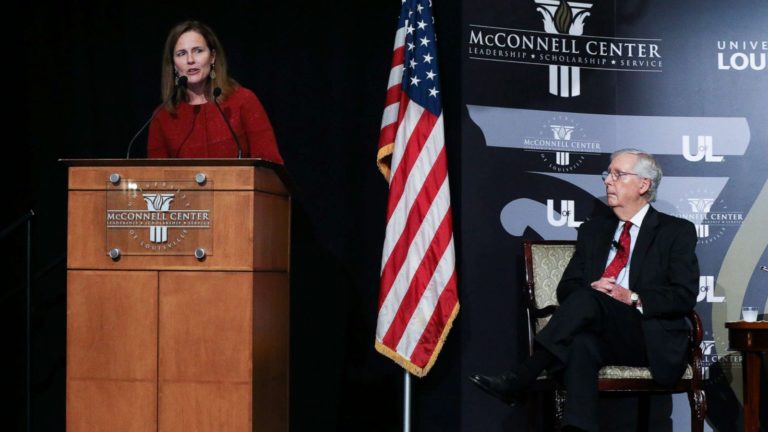 Is Impartiality in the Supreme Court Possible?

A few weeks after the Supreme Court was under fire for refusing to block a controversial Texas abortion law that jeopardizes the precedent set by the landmark case Roe v. Wade, Justice Amy Coney Barrett publicly defended the court’s inaction. At a Kentucky conference hosted by Republicans, Barrett argued that the Supreme Court is not “comprised of a bunch of partisan hacks.” She followed up by emphasizing that “judicial philosophies” are not “the same as political parties,” and briefly touched on how justices strive to not let their personal lives impact their judicial decisions.

Many were quick to point out the irony of the situation. How can Justice Barrett, standing in solidarity with Republicans at a convention center named for Mitch McConnell himself, make a serious argument for the court’s nonpartisanship?

When I asked Dan Noel, a former UC Berkeley Constitutional Law student, about his thoughts on Barrett’s statements, he emphasized that Barrett is not the first Justice to make these claims. During his time at Berkeley Law, Noel attended a talk given by Justice Elena Kagan in which she made similar claims. “Justice Kagan rebuked the idea that Supreme Court justices made biased or partisan decisions,” he explained, by asserting that “they decide cases based only on their interpretation of the law.” Kagan’s words, as Noel recalls them, share the same sentiment as Barrett’s, even though both justices seldom agree judicially.

So why do justices make these claims? Both Barrett’s and Kagan’s beliefs in nonpartisanship do not hold up to their judicial records. In claiming nonpartisanship, the court sounds, at the very least, disingenuous.

Although Justices Barrett and Kagan may wholeheartedly believe in their nonpartisanship, there is a resounding dissonance between the public statements they make and their court rulings. It is this dissonance that provokes distrust from the American public. But Supreme Court justices have always been tied to political partisanship, by both their representation in the media and their personal actions. Interpretive constitutional theories, many of which justices openly support, are inextricably linked to political parties.“Originalist” and “textualist” have become euphemisms for Republican or conservative-leaning, while supporters of the “living constitution” are assumed to be Democrats or left-leaning. For justices, these partisan labels are inescapable; the media seizes every opportunity to label justices—for the purpose of expedience, attention, or simplicity—as conservative or liberal. Furthermore, the media constructs political personas for justices that they do not consent to. These media-crafted personas are impactful on the justices’ perception of themselves, their litigious work, and their consciousness of nonpartisanship. That said, the media is not entirely to blame for the justices’ inability to maintain nonpartisanship. Justices often tout ideas or engage in activities that are self-incriminating, in the sense that they either advertently or inadvertently associate themselves with a party. This, of course, is impossible to prevent because oftentimes law and politics—especially concerning foundational values and beliefs—are impossible to separate. Nevertheless, it might be argued that justices could be more cognizant of the way partisanship arises in their work.

These two major factors—how the media represents justices and how justices represent themselves—both infringe on justices’ ability to be nonpartisan.

Of course, the constitution itself strives for impartiality among the high court’s constituents, but there is little in the way of infrastructure that actually promotes nonpartisanship amongst the justices; or rather, there is a lack of infrastructure that protects justices from falling victim to biases as their years in the court go on.

So, what might work? Right away, it is clear that imposing some restrictions on the freedom of the press to protect the images of justices would be an unviable solution, creating far more problems than it might resolve. If the justices were given preferential treatment by the media, or, more radically, hidden from it entirely, a dangerous precedent would be set that would make Supreme Court justices shadowless figures with nothing to win or lose. This in turn would engender even more partisanship in their psychology as they would not be held accountable for the decisions that they make. Public condemnation, in many ways, forces justices to rationalize their rulings, which motivates justices to make sure that their rulings are “good” and built from sound argumentation. Without a need to maintain their reputation, justices would be free to do as they pleased in the court, meaning that many of their rulings would not need to match the standards of legitimacy that they meet now.

Another suggestion would be having justices abstain from unnecessary political interactions. Perhaps if justices didn’t speak publicly often, their public figure status would diminish. Thus, they would not be openly labeled, criticized, or praised often, leading them to focus on law absent distractions. Of course, their image would still be public and subject to criticism, constraining their rulings to the extent that they still care enough to maintain a reputation. In reducing their political engagements, they would prevent themselves from developing political affiliation. In the case of Barrett, she should not appear at events alongside partisan individuals, nor should she engage with their criticisms or praises. If she reduces her interactions to people interested in her not for the sake of politics, but for other things, she will be able to prevent herself from becoming more biased. Unfortunately, this idea is untenable not only because it is impossible to implement as justices’ lives revolve around political individuals, but because it hinders the political knowledge and awareness required to be a Supreme Court justice. If Justice Barrett abstained from politics, she would not have all the relevant knowledge to interpret the law in a way relevant to the present. Without engaging in politics, she would be utterly in the dark regarding the developments and changes in the world that undeniably impact how the Constitution should be perceived. Without access to the evolving politics of the world, her litigious work would weaken. Some of the most relevant factors in a case are those that change or evolve with the introduction of new social, environmental, and economic issues. In isolation, Barrett would not be attuned to these developments; thus, she would be unfit to do her job.

In concluding our discussion, Mr. Noel and I agreed that the above philosophical solutions to partisanship in the court are not feasible. Not only would they be extremely difficult to implement, but they would infringe on the constitutional rights of both the justices and the press. Oftentimes when considering dilemmas in politics and government, it is easy to overlook the possibility that the present way is actually successful and presents fewer issues than conceived alternatives. When looking to mend issues, one realizes that things are the way they are for a reason. That does exonerate the issue of partisanship of the Supreme Court in a way—but it is still a big problem. However, perhaps “reducing” partisanship is the wrong way to look at the issue. Rather, maybe the issue is that justices who are partisan are that way because they lack exposure to the experiences that would balance out their perspectives. Shielding justices from the public only creates a larger divide between them and the people, making them less able to identify with the lives, ideas, and emotions they are ruling over. Instead, I believe that justices ought to be exposed to political gatherings among the wealthy in New York City, but also to the memorials for loved ones lost to lead poisoning in Flint Michigan, or community events to rebuild homes destroyed in Hurricane Ida. Instead of providing justices with cushy, comfortable lives, we should encourage them to embark into the world and feel all of its misery and joy, poverty and wealth, success and failure. Through these experiences, and accumulating knowledge of not just facts but of virtue, they will reach a state of humility that grants them the levelheadedness to engage in each case with reason, empathy, rationality and foresight. The notion that human biases of partisanship can be corrected is a false one. Biases can only be expanded. They can only be expanded to encompass more truths, expanded to be a little bit less extreme and a little bit more forgiving than they were yesterday.

Peter Hobart
More from The ReviewMore posts in The Review »