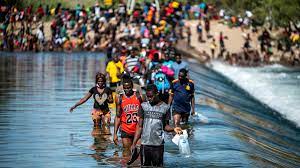 The Haitian Migrant Crisis: Business As Usual For US Border Policy?

Why do we see brutal images and aggressive tactics against immigrants under the Biden Administration? Is US immigration policy just going to be a continuation of the Trump Era?

38-year-old Joanne Joseph told the New York Times that life in Haiti was “a struggle every day.” An immigrant, she feels safe and secure as she continues to make a living and a life for herself in New York City. However, she fears for the lives of her father and sister who are still in Haiti. Ms. Joseph reflects on how she would live in constant fear as she went about her day, from “going to the bank [to] going to a gas station to fill the tank of [her] car.”

This is the reality that many Haitians currently live in—and which some attempt to escape from. Haiti continues to suffer through political turmoil and natural disasters. Earlier this year, a group of mercenaries assassinated President Jovenel Moïse. A recent 7.2 magnitude earthquake left over 2,000 dead. The COVID-19 pandemic has further exacerbated long-standing issues like corruption, poverty, and violence. Because of these conditions, Haitians make up a large part of the near 20-year-high in illegal border crossings.

During the month of September, US Immigration apprehended or expelled nearly 30,000 migrants at the Del Rio border in Texas, nearly all of them being from Haiti. Many of the migrants in Del Rio came from cities in Mexico such as Tijuana and have been trying to cross the US border for many months. But the US border patrol met them with force. Photos depicting the inhumane images of border patrol officers on horseback whipping at Haitian migrants attracted national attention and were strongly condemned by the Biden Administration.

How did the Biden Administration Respond?

The administration’s actions have only reinforced the cavalier status quo of US border policy. The administration continues to emphasize that it will resort to deportation flights to deter migrants from arriving at the border. At present, the administration is continuing to increase the number of removals and repatriation flights to Haiti, believing it will be an effective show of strength to convince other prospective migrants to avoid the journey to the United States. Unfortunately, the surge in Del Rio is only indicative of a broader influx of migrants to the southern border, one which shows of strength will not be able to dissuade. There are at least 60,000 Haitian migrants set to cross the Mexican border; some of whom have been trying for months.

The Biden Administration is using Title 42 as a crutch to carry out expulsion flights. Title 42 was a public health code that was implemented at the beginning of the COVID-19 pandemic. It gives border authorities the power to turn away migrants at the southern border. This comes at a time when there has been a sharp increase in attempted border crossings in the country. Over 938,000 migrants were expelled under Title 42 between October 2020 and August 2021 alone.

While the use of Title 42 is declining, we continue to see its worst effects against the Haitian migrants. Title 42 is now being used as a deterrent, grounded in racial oppression and xenophobia, against Haitian migrants. Advocates challenging the administration in court argue that the use of Title 42 violates many U.S. asylum laws, as it allows the government the right to expel migrants at the border without any due process. The administration is defending the use of the public health order to deport families, citing how lifting Title 42 will crowd and overwhelm DHS facilities and further aggravate the spread of the delta variant.

Even though the United States entered talks with Mexico, Panama, and other Latin American countries, over the expected surge of migrants back in August 2021, the administration is still not prepared to handle the crisis at hand. In fact, the former United States envoy to Haiti, Daniel Foote, resigned after the Biden Administration’s complete oversight of the crisis, stating that deporting asylum seekers was clearly “not the answer,” especially as it was aware of the state of the current socio-political crisis in the country. He stated that it was humane and counterproductive to turn away migrants at this time.

Haitian Migrants: The Victims of a Broken Immigration System?

The Biden Administration is contending with a damaged immigration system steeped in decades of racial scapegoating and xenophobia for decades. Rather than working to overhaul this system, its go-to response has been to work within its boundaries by deporting families and expelling individuals from the borders.

The immigration system in the United States has been broken for decades, and legal programs are backlogged by years. There are few resources to clear it up. The Trump Era only further aggravated the problem, especially with the imposition of additional procedural walls.

The Temporary Protected Status (TPS) and Deferred Enforced Departure (DED) procedure systems have become major points of importance regarding the current problem. These frameworks are often unpredictable and subject to changes. For one, the DED operates as a form of relief from removal. The President has the discretion to designate, add, or remove countries or regions for DED status, which allows certain individuals from countries facing major political and civil conflicts to stay in the United States without being subject to removal from a stipulated amount of time. Meanwhile, TPS gives eligible nationals a right to stay in the United States. Yet, this program does not include new arrivals from Haiti.

The DHS has failed to recognize the enormity and scale of the problem and the importance of offering Haitian asylum seekers the assistance they require since the 2010 Earthquake. Homeland Security also recently announced the termination of TPS to nationals from Honduras, Nepal, El Salvador, Haiti, and Nicaragua. However, the basis for a large number of these decisions stems from oppression and racial discrimination. In the NAACP v. DHS case in the year 2018, the plaintiffs argued that the decision to rescind TPS for Haiti was largely intended to oppress and discriminate against them due to their race and ethnicity.

The administration could consider expanding asylum rules and opportunities for Haitian migrants, particularly when it comes to providing work authorizations and protection from deportation under the Temporary Protected Status (TPS) designation. According to the Council of Foreign Relations, the Deferred Enforced Departure (DED) relief scheme could also be employed to prevent the removal of certain migrants for a certain period of time, especially Haitian migrants who are experiencing grave and extenuating circumstances.

Critics claim that the problem will only persist as the administration seeks to employ a “get tough attitude” as a way to send a message of deterrence to Haitians, and a show of strength to the Republican party especially as Biden’s polling on immigration is currently at a low point. The political dynamic of Washington continues to make finally pushing through a more humane immigration policy a nearly insurmountable hurdle. Without bipartisan support from Congress for additional resources, there will be little progress in implementing large-scale asylum reform.

Could this “get tough” policy be a tool to secure wider congressional support to finally catalyze larger and broader immigration reform by scapegoating Haitian migrants at the border? Even if it is, apart from a show of force, what might it stand to prove?

Overall, the Haitian migrant crisis continues to hold various significant and pressing implications on the future of US immigration policy,  systemic racism, and oppression. The issue is becoming a question of both legal and humanitarian significance with regard to border and immigration policy. This administration needs to work to massively overhaul the current immigration system, streamline outdated policies, and provide more options to individuals fleeing persecution and hardship.

Yet as immigration continues to be a divisive and partisan issue in America, when might we see results?