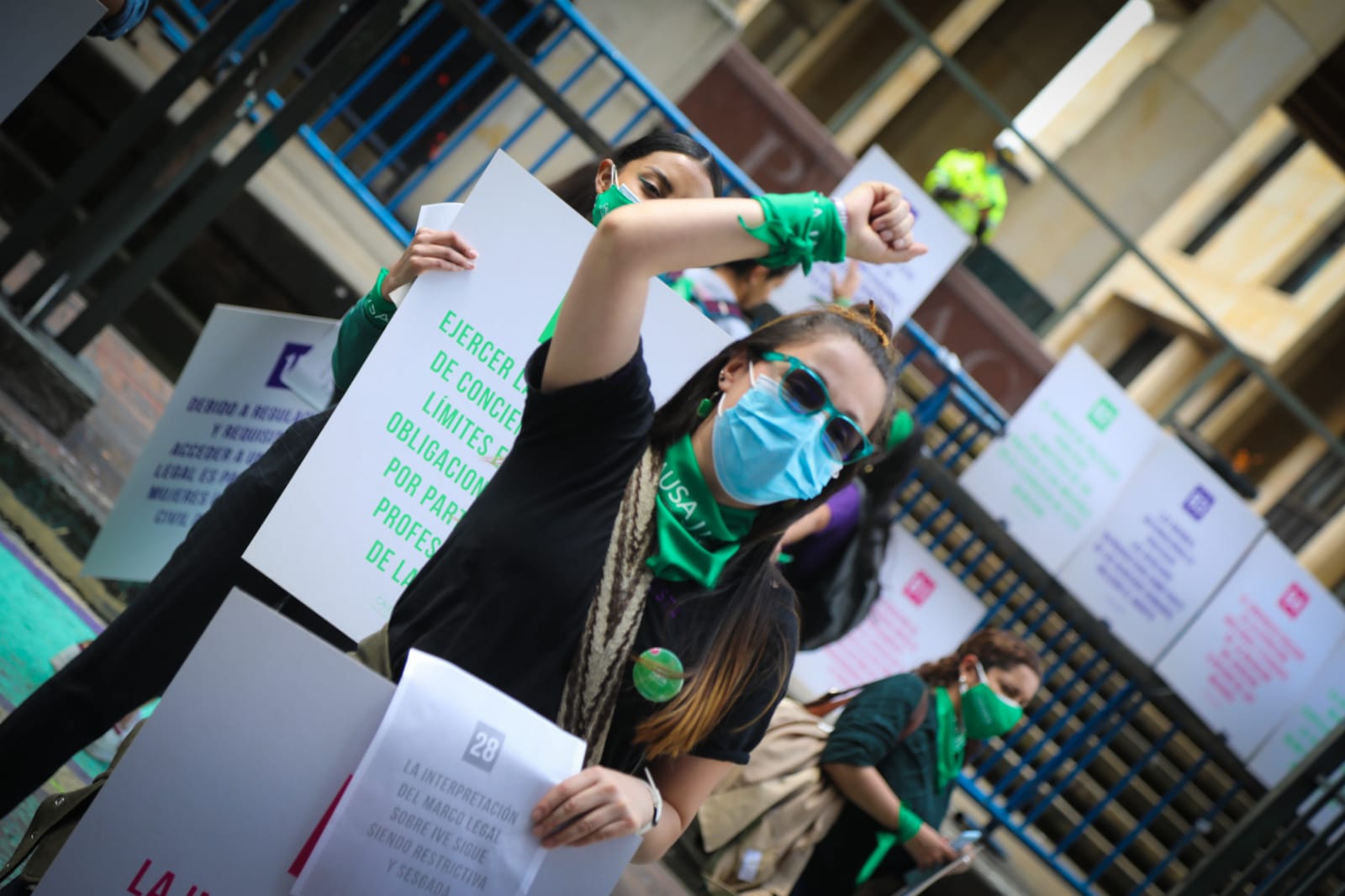 Vibrant green banners ripple through the air, joined by cheers, chants and triumphant fists. Crowds of women publicly rejoice, embracing each other and jumping with joy. Some shed tears, overwhelmed by the magnitude of the moment.

Over the past year, advocates for legal abortion in Latin America have greeted several success stories with emotion and celebration. First, in late December 2020, Argentina’s senate legalized abortion in an historic 38–29 vote. More recently, in September of this year, Mexico’s Supreme Court ruled that criminalizing abortion is unconstitutional, paving the way for future legalization. Ecuador and Chile, too, have both made moves to ease abortion restrictions. Even as global superpowers like the United States enact crippling restrictions on abortion access, the feminist Marea Verde (“Green Wave”) has gained ground on the road to reproductive justice.

Now, the movement is poised to witness either another victory or a sore defeat as Colombia’s Constitutional Court considers removing abortion from the national criminal code. The Court’s decision was delayed on November 18 after Judge Alejandro Linares, who is known to support decriminalization, requested to recuse himself from voting since he had previously spoken about abortion in the media. Unable to reach an agreement about Linares’ recusal, the Court has temporarily suspended debate. If his recusal is eventually accepted, the ruling would be further postponed until next year.

Abortion rights activists recently denounced the delay as harmful to women and girls since abortion remains illegal while the decision is halted. For years, they have argued that abortion should be treated as a matter of public health and fundamental rights rather than as a criminal issue. In a lawsuit first filed in 2020, Causa Justa (“Just Cause”), a coalition of feminist groups, asserts that the criminal code’s abortion penalties violate individual rights of equality and freedom. A 13,000-word amicus curiae submission by Dr. Octavio Ferraz, Co-Director of the Transnational Law Institute, characterizes the criminalization of abortion as a “blunt instrument that fails to achieve its purported aim of protecting fetal life at an inordinate cost to the rights and well-being of women.”

Should the judges ultimately agree with Causa Justa’s argument, Colombia would become the first country in Latin America to fully remove abortion from its criminal statutes, and the foundation would be set for full first-trimester legalization.

“Colombia, as a major player in the region, could have ripple effects in other countries,” explained Mariana Ardila, an attorney in one of the cases under consideration. “It would be huge, and our hope is that it inspires other movements in other countries that are discussing this as well.”

The fight for reproductive rights in Colombia has been anything but easy. Ever since a 2006 court ruling that ended a total abortion ban, Colombians have been able to terminate a pregnancy in only three circumstances: cases of rape or incest, danger to the mother’s health or fatal fetal abnormality. Otherwise, under the penal code, inducing or performing an abortion is punishable by one to three years in prison. In addition to these stringent legal stipulations, abortion is plagued by social stigma in a country where 70% of the population adheres to Roman Catholicism and only 26% of poll respondents support fully legalizing abortion. The Constitutional Court judges declined to extend abortion rights in March 2020, but also denied abortion opponents who had endeavored to reinstate an outright ban on abortions.

As a result, although an NGO study concluded that about 400 Colombians are criminalized for receiving abortions each year, this statistic belies a much darker reality. The pro-choice Guttmacher Institute estimates that over 400,000 abortions are performed annually, but less than 1% are reported as legal procedures. Instead, many women resort to clandestine abortion procedures that pose serious health risks. For instance, half of abortions in Colombia are carried out with misoprostol, which causes uterine contractions to expel pregnancy tissue. The drug is widely available, inexpensive and safe if used correctly; however, inadequate knowledge leads to side effects including heavy bleeding and incomplete abortion. In other cases, women turn to traditional midwives or nurses. As a last resort, some self-induce, which presents a host of potential medical problems related to unhygienic conditions, lack of immediate intervention for severe bleeding, and infections. The complications rate for self-induced abortions is 65%.

It comes as little surprise, then, that the direct costs of post-abortion care set the Colombian healthcare system back by $14.4 million every year. In terms of human life, a report by the country’s health ministry concluded that 70 deaths in 2008 alone could be attributed to unsafe abortions—“perhaps the most avoidable cause of maternal mortality.” Health care professionals, fearing punishment for providing abortion services, are responsible for most reports to the authorities, who sometimes come to arrest pregnant individuals in the very same medical centers where they sought help. “There is a lot of fear on the part of medical professionals, because first the burden of certifying the conditions for abortion falls on them and, when you are faced with the possibility of having legal problems, it is obviously much easier to turn your back on the problem,” gynecologist Dr. Laura Gil told NBC News.

All this suffering continues to unfold despite research from the Guttmacher Institute demonstrating that abortion rates are about the same in countries where abortion is broadly legal and in countries where it is restricted. The data indicates that criminalizing abortion does not reduce its incidence.

The picture is grim. For some, it is even bleaker.

While the criminalization of abortion in Colombia has deep and harrowing implications for any person able to become pregnant, several groups are disproportionately burdened by restrictive abortion laws.

Of the 400 documented abortion cases that Colombia prosecutes each year, about 97% target residents of rural areas. For clandestine abortions, meanwhile, safety is a salient concern: rural residents are far more likely to use methods other than misoprostol, such as seeking out midwives to vaginally insert sharp objects or medicinal herbs. Consequently, rural areas witness a complications rate as high as 53%, compared to the overall rate of 33% for clandestine abortions. In the Pacific region, characterized by rural conditions and a strong presence of ethnic minorities, well over half of the population lives below the poverty line. By no coincidence, this is also the region where the highest percentage of abortions (40%) require follow-up treatment, yet half of post-abortion complications among poor rural residents are not treated at all.

Transgender men and gender non-conforming people who need abortions must confront unique challenges related to their identity. A joint survey by two organizations, Asociación Profamilia and Alianza Trans Abortera de Colombia, interviewed 141 transgender men and non-binary people. Of those surveyed, 10% had needed an abortion at some point in their life, and of those, over a third were not able to access the procedure. Doctors may take advantage of the penal code’s language, which explicitly refers to “women,” to refuse abortion services to pregnant people with different gender identities, even if the requested abortion falls within one of the three legal categories. This loophole is all the more tragic considering Colombia’s long and bloody conflict with guerrilla groups. Armed forces have perpetuated sexual violence against transgender men in order to “teach them to be women,” according to a report by the National Center for Historic Memory.

Finally, far from showing mercy to the most vulnerable, the criminal code cracks down harshly on children and adolescents. A 2021 study by the feminist organization La Mesa por la Vida y la Salud de Mujeres found that 12.5% of criminal abortion prosecutions target girls between 14 and 17 years old, and approximately 25% of those convicted for abortion are minors.

It is clear that the consequences of criminalization are not distributed equally. On the contrary, social groups that already experience marginalization and disempowerment have borne the brunt of the punitive code. Legalizing abortion would thus mean moving toward a more equitable future. Those living in rural areas could seek out safe abortions at medical facilities, rather than relying on midwives or attempting to self-induce. Doctors could not weaponize legal loopholes to rationalize discrimination against gender-diverse people who require abortion services. Rather than contending with criminal charges, pregnant girls could receive the succor and support that they need throughout their ordeal. The Constitutional Court’s decision has the power to transform Colombia for the better.

Caught in the crosshairs of religion and science, morality and legality, governmental authority and individual liberty, abortion has claimed a spot as one of the most polarizing political issues in the last few decades. Latin America, where the Catholic Church still exercises immense influence, is home to some of the world’s most restrictive abortion policies, with four countries banning abortion altogether and most others permitting abortion only in restricted circumstances. Although this state of affairs renders the Green Wave’s accomplishments all the more significant, it also means that a great deal remains to be done.

The continent’s northern neighbor, the United States, hardly fares better. This term, the Supreme Court is considering Dobbs v. Jackson Women’s Health Organization, a direct challenge to the 1973 ruling Roe v. Wade that recognized Americans’ constitutional right to terminate their pregnancies. With the Supreme Court’s current conservative tilt, the fate of abortion access in one of the world’s most powerful and influential countries hangs in precarious limbo. Whether developing countries will follow this trend or chart their own course will define the twenty-first century global outlook on reproductive rights.

Kit Beyer is a Staff Writer for the World section. Kit intends to major in Political Science and is interested in international law and human rights.