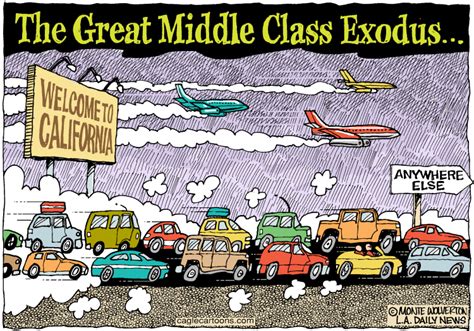 If you have lived in California for very long, you have heard the myth. By all accounts, high income and corporate tax rates are causing an economic downturn that is prompting folks to flee California for conservative paradises like Texas and Florida. It’s obvious, right? Liberals are destroying businesses with regulations and progressive labor laws. The myth has seemingly ironclad logic—until you realize California has the largest economy of any state in the country, the highest amount of venture capital infusion and a robust public education system that seeks to increase socioeconomic mobility.

Conservatives were delighted when podcaster Joe Rogan announced he was leaving California and moving to Texas. Rogan, a very popular internet personality, is the host of “The Joe Rogan Experience,” currently the #2 rated podcast on the Spotify charts. Rogan is a bit of an enigma, one day arguing for a women’s right to choose and the next spewing deranged conspiracy theories about the COVID-19 vaccine. However, Rogan makes one thing crystal clear: he believes California is going to hell. In a video titled “There is a mass exodus from California right now,” Rogan says “they’re bankrupt. The state [of California] is bankrupt.”

Huh? Rogan must have missed the news that California ended the fiscal year 2020 with a $75 billion dollar surplus. Rogan continues to rant, lamenting California’s 13.3% state income tax rate. He’s not technically wrong, he just isn’t giving the viewer all the information. See, the 13% rate only applies to incomes over $1,000,000. Rogan makes it seem like every person off the street is paying 13% in taxes when in reality it’s only millionaires. He keeps the audience deliberately misinformed, relying on the fact that most of the American public does not understand marginal tax rates nor the complexities of corporate or capital gains tax. To clarify, a marginal tax rate  of 13% means that Rogan is only paying 13% taxes on the money he makes over $1,000,000, with previous income below that amount taxed at lower rates.

Rogan’s comments point to a general trend from many conservative media figures’ comments about the California economy. They distort facts, misrepresent policies and often just lie. Unfortunately, people believe them. Rich conservatives use these lies to distract their fellow middle and lower-class conservatives from the real issues facing the economy. They deflect from problems like wealth inequality and low wages by peddling anti-tax and anti-immigration rhetoric. Rogan’s comment section is full of Texans and Floridians urging Californians to not make their states like the Golden State. But to be quite honest, Texas and Florida politicians would love to have California’s economy.

Let’s look at the facts. We can start with venture capital infusion in California. Venture Capitalists (VCs) are investors that tend to focus on investing in high-risk, high-reward startup companies. VCs are naturally attracted to areas with high innovation. They seek locations where they can find people that are creating technologies and products that will be highly profitable in the future. If you’re still confused about what a venture capitalist is, think Shark Tank. California is a hotbed for VC money. According to CrunchBase Daily, in 2020 California saw an infusion of $84.3 billion of venture capital into the economy. This money usually goes to companies in Silicon Valley that are creating new technologies that will power global markets throughout the 21st century. The next state for VC investment is New York with just $17 billion, meaing California has almost 5 times the VC than the next state, and twice as much as the next 4 states combined! Notably, New York and Massachusetts are #2 and #3—both liberal, high tax states. Texas is a distant fourth. But hey, 4th is the third loser? Keep your head up Texas. VC money doesn’t necessarily give us the full picture of the California economy. However, the data seems to suggest that people who actually invest in businesses and have the most interest in business growth and profitability, are choosing California to place their bets.

It’s often hard to comprehend the size and scope of California’s economy. That’s part of the reason why almost 40 million people call California home, for it provides great access to job opportunities. Demand to live in California is so high that housing prices are skyrocketing. While that’s certainly a problem California needs to address, it does signify an eagerness to live in California. Anyone who’s taken an introductory economics course will tell you that when demand rises, so does the price. California’s economy represents 14.62% of the United States GDP, which is 1.5 times higher than Texas. In fact, if California became its own country tomorrow, it would be the 5th largest economy in the world.

Another contributing factor to California’s economic prowess is its devotion to properly funding public education. A more educated workforce is a more productive workforce, and over the past few years California has rolled out a program to increase educational attainment for its citizens which will also increase socioeconomic mobility. The California Promise Program provides two years of free education for first-time community college students that are residents of California. CPP not only improves economic growth in California, but many well-educated people migrate to other states and across the globe with the affordable high-quality education provided to them. California also accounts for half of the nation’s top 10 public universities, including our very own UC Berkeley.

While California is an economic giant, it does have a host of problems it needs to address that are admittedly reducing the state’s allure. For instance, a lack of access to affordable housing is a huge problem in California and is a key driver of homelessness in our state. According to 2019 U.S census data, the median price of a California home is nearly 2.5 times higher than the national average. Homeownership is also a racial justice issue, as white Californians are two times as likely to own their homes than Black Californians. Trying to solve the problem, the California legislature has passed a variety of pro-housing bills such as SB10, which allows cities to change zoning laws to increase housing near transportation centers. However, the actions of the legislature may be too little and too late. If hard-working Californians cannot afford a place to live, they may well migrate to other states with more affordable housing. Additionally, if more housing cannot be built, the homeless population will increase, leaving too many Californians out of the promise of equality and happiness. A combination of pro-housing policies and increased funding for resources for unhoused people would do much to ameliorate the problem.

The drastic effects of climate change are also driving Californians out of their homes and destroying the natural beauties of the state. California politicians must address the climate crisis head-on to prevent further destruction of communities and ecosystems. This year, the KNP complex fire has threatened Sequoia National Park. The loss of these trees would mean the destruction of one of California’s most precious natural wonders. Most Californians remember the tragic Camp Fire that killed 85 people and destroyed the community of Paradise. Many residents are undergoing a rebuilding process there, but others packed their bags and headed out of California. Without a doubt, California has failed to meaningfully address the effects of climate change. This failure means that many California residents are disillusioned with California, and have decided to try their luck elsewhere.

These issues are understandably driving some Californians away, but it’s not quite all doom and gloom like rich conservatives like to say. At its core, the issue at hand is what type of economy should states, and by extension the country, build? Should we strive for an equitable economy that invests in education, healthcare and infrastructure development? Or should our economic goals be to deprive public programs of needed funding, pay low wages and propagate unregulated capitalism?

California’s not perfect, but it’s better to live in a state that makes the wealthy pay their fair share, has a functioning electric grid (one more over the Texans) and tries to build the economy from the bottom up, not the top down. Next time you hear that California’s economy is going to hell, rest assured knowing that it’s doing just fine. What California should do, is fight climate change and address the housing crisis, not solve economic issues that don’t exist.