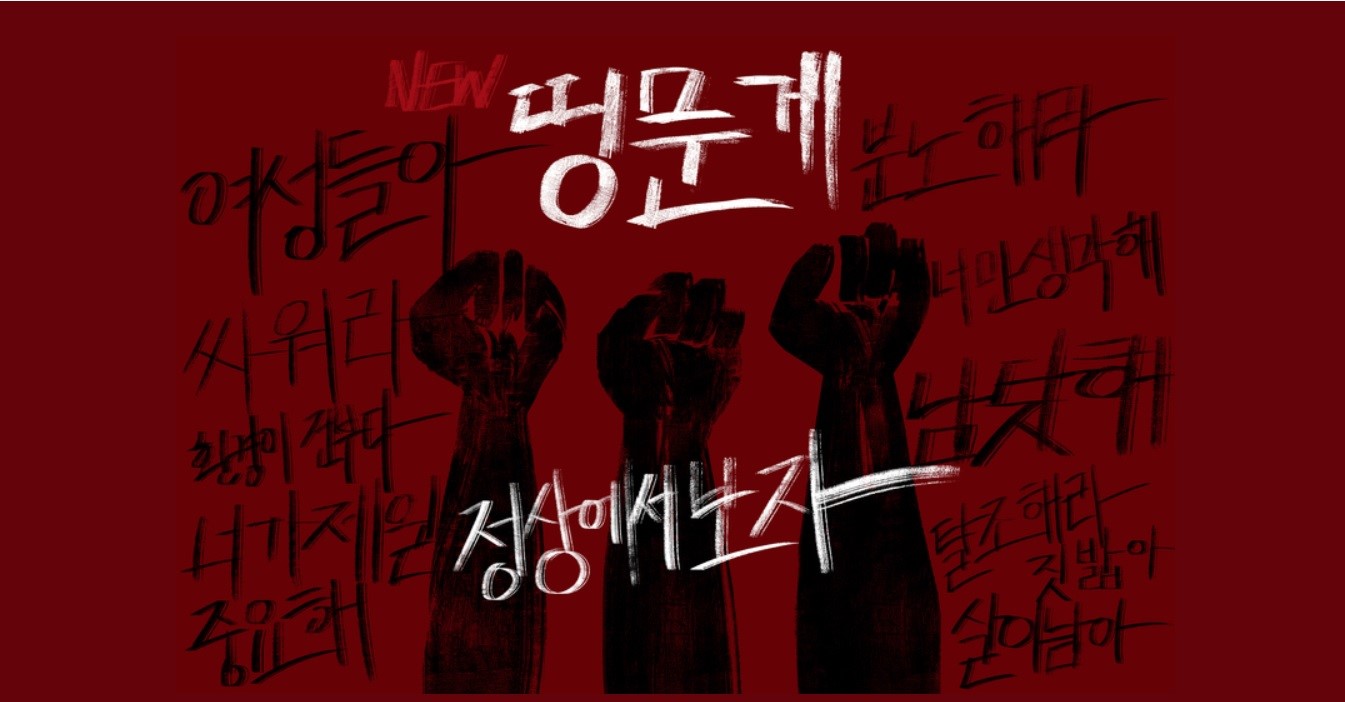 The growing social divide between the men and women of South Korea shows no signs of subsiding in the near future and threatens to seep into the upcoming presidential election. Never has the country experienced such vicious conflict between the sexes. The mere mention of gender is bound to spark an argument in nearly any setting; while a rough analogy, it could be considered as the Korean equivalent of discussing abortion in the United States. One can imagine the controversy that ensues when a public figure touches upon—or God forbid, takes a stance on—such a sensitive issue.

Fueled by the rise of self-proclaimed “feminists,” what was initially a cold war mostly waged online has now expanded into the real world. This development began about six years ago with the emergence of Megalia, a radical “feminist” online community. Seemingly out of nowhere, these individuals burst onto the scene, galvanizing women with suppressed hatred for men—or anything even remotely in relation to them. Enforcing poorly disguised misandry that had little to do with the empowerment of women, Megalia, alongside other “feminist” collectives, effectively tarnished the term “feminism” in South Korea and paved the way for bitter discord for years to come.

Feminism was far from a prominent ideology in Korea until recent years, with 2015 marking the birth of Megalia and subsequently the Korean chapter of “feminism.” Launched in retaliation against alleged misogynistic statements made on an internet forum called DC Inside, Megalia embraced the online activism which defines fourth-wave feminism, ruthlessly deriding men and expressing outrage at even the slightest sign of misogyny or sexism in popular culture.

While Megalia shut down after nearly two years of infamy, the so-called “feminism” boom was far from over. A substantial number of Megalia members launched another website by the name of Womad, a portmanteau of “woman” and “nomad.” The rather jarring reason for their secession from Megalia was due to its ban on homophobic and transphobic slurs. Unlike how fourth-wave feminism in Western society embraces intersectionality, Womad had no interest in promoting equality for all: they were hell-bent on achieving “equality” strictly for biological females, no matter how vitriolic the rhetoric.

In 2016, Womad organized a protest in honor of the Gangnam Station murder case victim, attributing the murder to the alleged deep-rooted misogyny of Korean culture. What should have been a solemn occasion quickly escalated into physical conflict between the members of Womad and far-right internet communities. Later in 2018, a female model unabashedly uploaded several nude photographs of a fellow male model from a college course they were taking together to the website; the post garnered massive public outrage and eventually led to a police investigation. In an almost comical turn of events, Womad somehow took issue with, as they claimed, the sexist nature of investigations regarding similar cases involving women—regardless of the fact that the victim was a male—and took to the streets to carry out the largest organized feminist protest in Korean history.

Feminism has persisted to be arguably the most significant issue of the year in South Korea. The pushback against the so-called “feminists” has begun; anti-feminist sentiment is rampant amongst young men, with an astounding 72.5 percent of male voters in their 20s having voted conservative in the recent Seoul mayoral election. Lee Jun-seok, despite being a relatively inexperienced politician at the age of 36, was elected as the chairperson of the conservative opposition largely due to his anti-feminist platform. Even so much as a hint of feminism in advertisements is corporate suicide—GS25, a major convenience store chain, was the first company to feel the wrath. An San, a female archer who won three gold medals in the 2020 Summer Olympics, was relentlessly denounced for having included Womad lingo in a handful of Instagram stories. As of now, being a feminist in South Korea is unequivocally taboo.

Though feminism is a broad term and some of its claims are met with dissent, it is generally perceived in the West to be a sign of social progress. In Korea, however, a substantial portion of the youth agree that “feminism is a mental illness”—the youth who usually lead the movement in other parts of the world. The youth who should be invested in dismantling the patriarchy are instead working to further it.

Men in their 20s and 30s are disgruntled, believing they are victims of reverse discrimination. They are tired of being labeled as “sexist” and “misogynist” for merely being the advantaged members of a fundamentally skewed society. They resent the pro-feminist policies of the Moon administration. They have already driven the conservative victories in the mayoral elections of Seoul and Busan, the two largest cities in South Korea. And now, the presidential election is only months away.

Suffice to say, feminism has gone rancid in South Korea. So, what went wrong?

History has taught us that ideology driven by hate never ends well. Nazism, McCarthyism, apartheid—in one way or another, society is bound to push back against such a tide, eventually correcting its wrongs. This perfectly describes the current state of South Korean feminism: it is little more than pathetic, misguided misandry. The actions of the “feminists” do not represent the values of fourth-wave feminism whatsoever. They do not pursue genuine gender equality; desecrating pictures of national heroes and Korean War veterans solely for the fact that they were men in no way empowers women. They definitely do not have compromise in consideration, and so, they have managed to permanently tarnish feminism’s reputation in South Korea in the short span of six years. After years of their ridiculous crusade for “equality,” the correction process has finally begun.

The key issue behind the abject failure of feminism in Korea is that it sorely lacked an educational foundation. Feminism is a gradual process that was fueled by the literature and activism of figures such as Simone de Beauvoir and Elizabeth Cady Stanton.  As of now, it is an ongoing battle to further resolve gender equality whilst including other minorities in the cause. The problem is that such crucial context was not at the forefront of the initial spread of feminism; instead, it was a website with an emblem mocking the size of Korean men’s genitalia. Considering the vile rhetoric and notoriety of Megalia, it should not come as a surprise that feminism is now synonymous with misandry. How can an ideology—or a demented, abhorrent version of it—blossom when its roots are so blatantly rotten?

It is true that gender equality has yet to be achieved in South Korea. It is a socially stubborn country, one that is significantly slower to adapt to the progress made elsewhere in the world. Admittedly, misogyny is still rife in many corners of the Korean community; having one of the largest wage gaps amongst developed countries is just one of many examples of Korea’s anachronism. It is also not a healthy development for such a sizable portion of the younger population to be turning to conservatism, especially in a country plagued by such outdated social norms. However, the so-called “feminists” have utterly lost sight of the feminist movements that earned them the right to such extreme speech in the first place. They have created their own twisted edition of feminism. Their misdirected hate has demonized feminist thought, ultimately harming their cause and long-term potential to foster gender equality. The growing gender divide must subside, but it must start with the halt of “feminist” extremism.