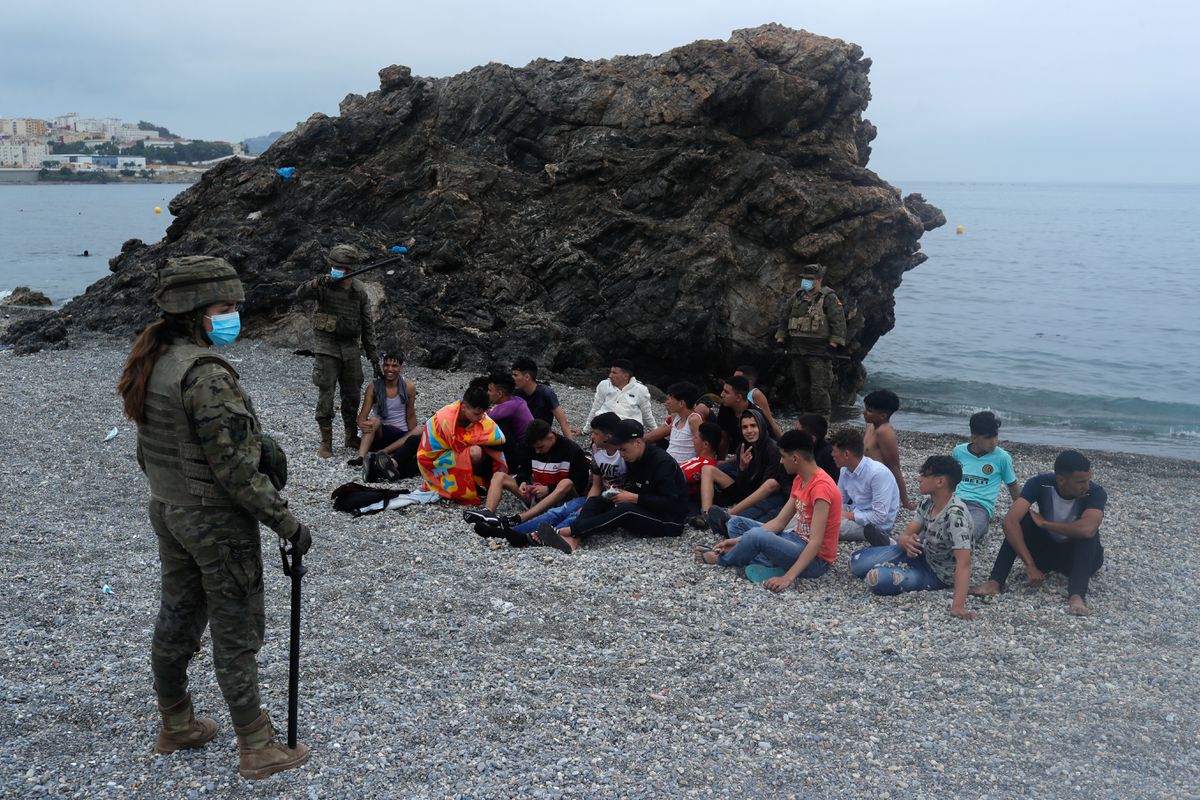 Caught in the Middle: The Immigration Crisis Between Morocco and Spain

At the end of August, diplomatic sources confirmed that Karima Benyaich, the Moroccan ambassador to Spain, would resume her duties in Madrid. The announcement signaled reconciliation after a months-long diplomatic crisis.

Morocco recalled Benyaich from her post in May after tensions between the two countries escalated following  Spain’s decision to allow Brahim Ghali, leader of the Polisario Front liberation movement in Western Sahara, into a Spanish hospital to treat him for COVID-19. The move prompted Morocco, which has outlawed the Polisario Front in areas under its jurisdiction, to relax its border controls and permit an unprecedented influx of 10,000 migrants to stream into Spain’s North African enclave of Ceuta. Among the new arrivals were around 2,000 minors, some unaccompanied by adults. Most reached Ceuta by swimming around breakwaters, while some paddled small boats or used makeshift swimming boards. At least two young men died in the crossing, their bodies taken from the waves by Spanish authorities. Though the local government set up emergency shelters, they were rapidly overwhelmed.

In response, Spanish troops descended upon Ceuta, which spans just 19 square kilometers in area. Soldiers and armored vehicles rounded up migrants on the beach and sent them back to Morocco, in some cases striking them with batons to hasten the process. The emergency forced Spanish Prime Minister Pedro Sánchez to cancel a scheduled trip to Paris and fly to Ceuta instead.

Nevertheless, both countries’ leaders soon demonstrated a willingness to put the quarrel behind them. Morocco’s King Mohammed VI expressed the desire to strengthen ties with neighboring countries. Sánchez affirmed that Morocco remains a strategic ally for Spain and offered hopes for a “cohesive relationship” based on “trust, respect, and cooperation.”

Such a relationship lies within Spain’s interests, as well as those of the wider European Union, to reduce irregular migrant flow into member states. Morocco, for its part, is a privileged partner of the EU that has received over 13€ billion in aid since 2007 and would like that number to increase. Accordingly, with the matter seemingly under control, Spain and Morocco’s governments are looking toward the future— while turning a blind eye to breaches of international law.

Spain’s handling of the situation, particularly its deportation of migrant minors, ignited fierce backlash from human rights groups such as UNICEF, Save the Children, and Human Rights Watch. Several cited the United Nations Convention on the Rights of the Child, ratified by Spain in 1990, which stipulates that children shall be “provided the opportunity to be heard in any judicial and administrative proceedings affecting the child.” The Association for Human Rights of Andalusia (APDHA) asserted that Spain violated this provision by carrying out “express deportations without guaranteeing individualized judicial protection.”

Spokespeople for Spain’s Interior Ministry said that the deportations were “being done correctly and according to the law.” However, they provided no details on how the migrants’ rights were protected. Their claim also contrasts the APDHA’s account, which included reports of “attacks on minors by members of the army, breach of the duty to protect children, hot returns without the minimum guarantees,” and “criminalization of migrants.” Sources on the ground referred to the scene as “mayhem,” and with the thousands of individuals involved, it is highly unlikely that the proper legal protections were allotted to each child. Indeed, military personnel eventually confirmed that some underage migrants were immediately returned to Morocco.

Ultimately, Morocco’s decision to relax its border controls displayed a blatant disregard for human dignity: using migrants as fodder in a political dispute. The Spanish government nonetheless should have treated the migrants, who had no say in their status as bargaining chips, in accordance with their rights under international law. The rushed deportations were an injustice that even the intensity of the crisis cannot forgive. Both countries failed to properly address the problem at hand: Morocco should have sought to resolve its grievance through diplomacy and negotiation, while Spain should have adhered unwaveringly to its international humanitarian commitments.

The consequences for the children involved are likely to be tragic and severe. Andrés Conde, managing director of Save the Children in Spain, reported that many of the deported children are in a “situation of risk.” Interviews with the minors revealed testimonies of human trafficking, sexual violence, and exploitation. About a quarter reported experiencing household abuse. Furthermore, after the swim to Ceuta, dozens of migrants came down with hypothermia, and time spent on the streets or in overcrowded shelters compounded threats to their health. These exceptionally vulnerable individuals were caught between two sparring sides, and now they, rather than those directly implicated in the diplomatic spat, have to suffer.

It would be preferable to regard this tragedy as an isolated incident, but to do so would ignore the wider trends. In December 2016, when the European Court of Justice ruled that occupied Western Sahara was distinct from Morocco, Rabat pulled a similar stunt, relaxing police patrols to permit several large crossings near Ceuta. Two years earlier, after Spanish police mistakenly boarded King Mohammed VI’s yacht, Morocco again let down its guard, leading to a surge of 1,2000 migrants at the border.

The King is not alone in his proclivity to weaponize migrants. Also in 2016, when the European Parliament voted to freeze EU membership talks with Turkey—another privileged partner—Turkish President Recep Tayyip Erdoğan threatened that “border gates will be opened” to let refugees from the Syrian civil war flood into Europe. Erdoğan made good on his threat in February 2020, triggering a humanitarian crisis at the border with Greece that only ended after the pandemic forced Turkey to close its borders once more.

Such incidents stand as proof of the EU’s misplaced reliance on leaders who aren’t afraid to use migrants as pawns in even the pettiest of disputes. Using human lives as political leverage is unquestionably deplorable. Not only does this approach set severe crises in motion, but it also adds fuel to the dangerous, racially-charged narratives of far-right nationalists, who have witnessed a recent “boom” of support across Europe.

While it is true that the EU must work with countries like Turkey and Morocco to manage immigration, its member states must remain conscious of refugees’ rights, respecting their dignity and humanity under the principles of international law. With concerns that the Taliban’s seizure of control in Afghanistan will spur a new outflow of migration, and in the light of recent comments from Turkish officials that the EU’s migration policies require revision, the debate over immigration is bound to come to a boil. The EU will need to evaluate its strategies as it faces an uncertain future.