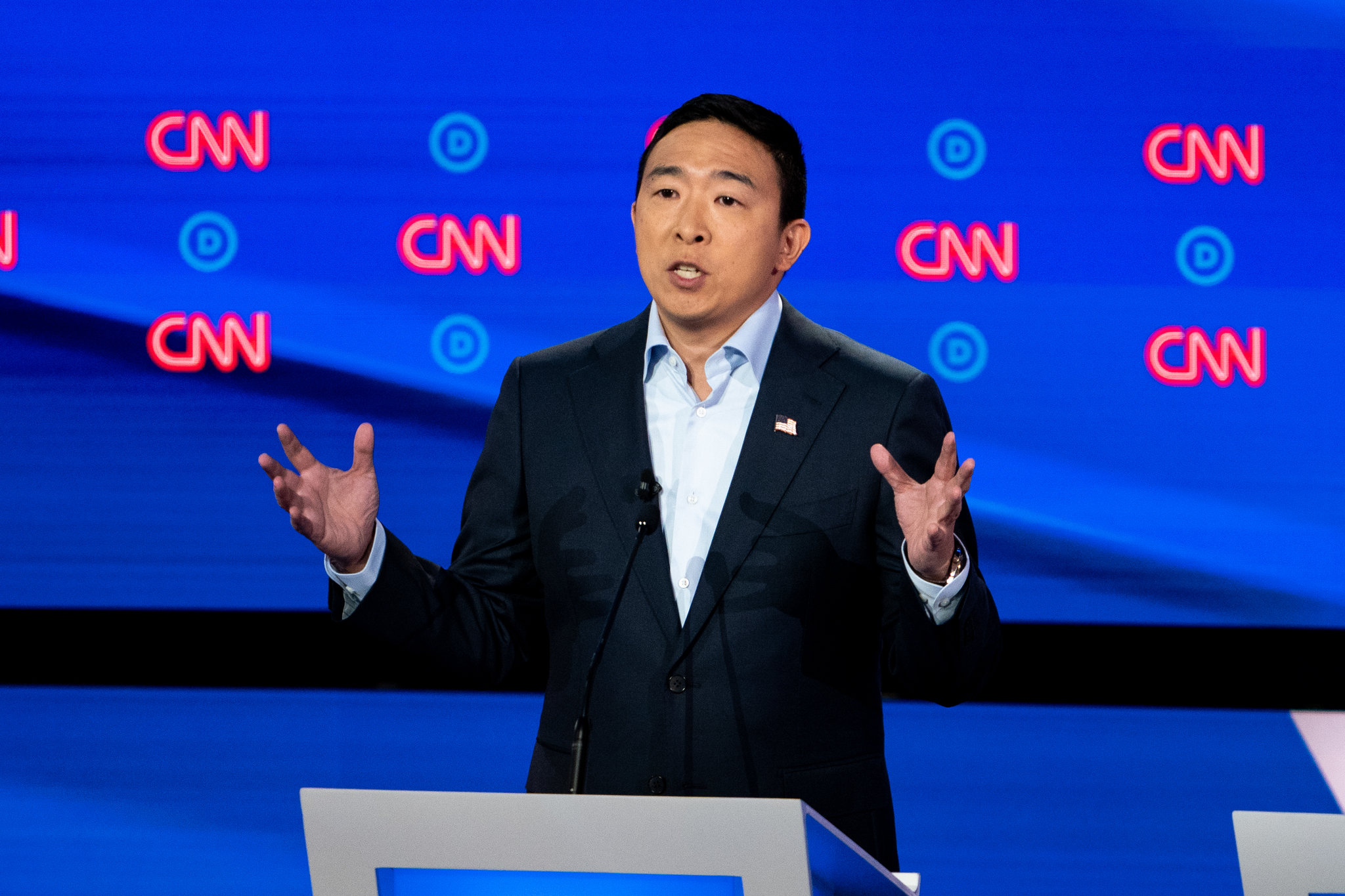 Andrew Yang’s ‘Forward’ May Set Us Back

Two years ago, Americans intently watched the shifting momentum and traction of the Democratic Party’s presidential nominee hopefuls; the public fixated on the frontrunners like then-Vice President Joe Biden, Senators Bernie Sanders and Elizabeth Warren, and even the fresh, charismatic Mayor Pete Buttigieg. However, entrepreneur and businessman Andrew Yang quickly proved a formidable opponent, polling at 7% in January of 2020. Pushing a snazzy slogan advocating for “MATH” (Make America Think Harder), Yang garnered support from a cross-section of enthusiastic youth, high-profile celebrities, and even a few elected officials. Unfortunately for Yang, his energized base could not surmount the momentum gained by Sanders and Biden, and the night of the vital New Hampshire Democratic Primary Yang ended his campaign for the presidency and soon after endorsed Joe Biden. While his political stint as a Democratic presidential nominee ran short, Yang pushed and popularized key platforms and stances, like universal basic income, that floated in Democratic circles and youth voters even after his departure.

Following Joe Biden’s election to the White House, Yang reentered the mainstream political scene after actively campaigning and mobilizing voters to turn out in the 2021 Georgia U.S. Senate Runoff Elections, ultimately aiding the successful elections of Jon Ossoff and Raphael Warnock to the U.S. Senate. On January 13th, 2021, Yang formally announced his bid for the 2021 New York City Mayoral Democratic Nomination, facing candidates like progressive Maya Wiley, whom Alexandria Ocasio-Cortez and the progressive wing endorsed, and Eric Adams, who ran with a police-friendly, more moderate platform. While initially around 20% of New Yorkers expressed support for Yang as the Democratic Nominee, his momentum dwindled, and by May — a month before the Democratic primary election — Eric Adams emerged as the frontrunner. Yang failed to secure the Democratic nomination and was eliminated after coming in fourth in the sixth round of counting the ranked-choice ballots, with Eric Adams eventually securing the Democratic nomination in June. Since his loss, Yang has reemerged in a new, unprecedented, and unexpected way, announcing in his book Forward: Notes on the Future of Our Democracy that he will soon launch a third party named “Forward Party.” Yang’s colorful political career surely sets up the businessman for a strong political presence in the future, but examining the impact of third parties in the past should alarm Mr. Yang and all voters with the concern that voting for third parties in hope of progressing forward, can instead set us all back.

Third parties have an interesting effect on American politics. While 58% of Americans are registered with either the Democratic or Republican Party, third-party voters have the ability to completely swing presidential elections and the electoral college. For instance, in the 1992 Presidential Election, then-Governor Bill Clinton successfully challenged and beat incumbent President George H.W. Bush, but only secured 43% of the vote, winning with a plurality. Many speculate that Clinton was able to win in 1992 because independent candidate Ross Perot — who ran on a platform of tax-cuts, populism, and fiscal conservatism — performed exceptionally well for a non-Republican or non-Democrat candidate. He cut into Bush’s voter base to secure 18.9% of the national vote, leaving the incumbent Bush with only 37.4% of the vote. Although Perot rejects this assessment, many accused the independent candidate of causing a spoiler effect, when a candidate splits votes between themself and another similar candidate (Republican George H.W. Bush) causing a dissimilar candidate to win an election (Democrat Bill Clinton).

In 2000, the effects of a third-party spoiler candidacy proved even more consequential; then-Vice President and Democratic Presidential nominee Al Gore lost the state of Florida (the state which would end up deciding the winner of the Electoral College) to Republican George W. Bush by less than 0.01%, while Green Party nominee Ralph Nader won 1.64% of the Florida vote, more than any other third-party candidate in the state. Analyses following the 2000 Presidential Election confirmed that Nader attracted voters who would have otherwise voted for Gore in his absence, with a Republican interest group even airing ads in Florida in support of Nader meant to split the Democratic vote to aid Bush.  These ads ultimately assisted Bush’s victory in the Electoral College, leading to Bush securing the presidency despite Gore winning a plurality of the nationwide popular vote.

While spoiler candidates may seem a relic of the past, third parties have nationally shaped the electoral performance of the two major parties as recently as the 2016 Presidential Election. Many speculate that Donald Trump was able to secure the presidency by winning three states: Wisconsin, Michigan, and Pennsylvania. The Green Party and the Democratic Party share similar platforms and are ideologically aligned in opposition to right-wing conservatism and the Republican Party. These similar political stances signify that many Green Party voters could achieve their ideals and goals, especially abating Republican success, by voting for Democrats. These potential votes would have been crucial: if Democratic nominee Hillary Clinton won just 22,749 of Green Party candidate Jill Stein’s 31,072 votes in Wisconsin, 10,705 of Stein’s 51,463 votes in Michigan, and 44,293 of Stein’s 49,941 in Pennsylvania, Clinton would have won the Electoral College votes. In that case, in addition to Clinton winning the national popular vote that Trump failed to win in 2016, she would have been elected the first female president of the United States. The dangers of third parties in splitting votes and forcing elections in which the winner of the popular vote loses the Electoral College still loom. Hillary Clinton predicted that Tulsi Gabbard would be groomed as a “Russian asset,” that is to run as a third-party spoiler candidate in the 2020 Presidential Election to ensure Trump’s re-election. However, Democrats were able to secure both the popular vote and Electoral College, electing Joe Biden president without substantial interference by a third party.

Moreover, Yang has pledged that the Forward Party will endorse any Republicans or Democrats who align with such key platforms. Although Yang seems cognizant of the dangers of spoiler candidates and third parties, the memories of 2000 and 2016 should not be forsaken whenever discussing, weighing, or contemplating third-party candidates. More specifically, the fate of the nation’s future remains in the hands of voters at the ballot box. After all, Stein, similar to Yang, never sought to harm Hillary Clinton’s electoral prospects so much as to help elect Trump, but regardless of Yang’s intent, enough voters disregarded the dangers of casting ballots for third parties in a presidential election to help elect a now twice-impeached reality television personality. The Forward Party seems like a promising medium to achieve long-overdue progressive electoral reform, but Andrew Yang, and all voters considering casting a vote for third parties like the Forward Party, must keep in mind the peril of purism and stay open to supporting Democratic candidates who do not fully align with the Forward Party’s platforms.  If they fail to do so, we may experience calamitous setbacks caused by a search for progress.