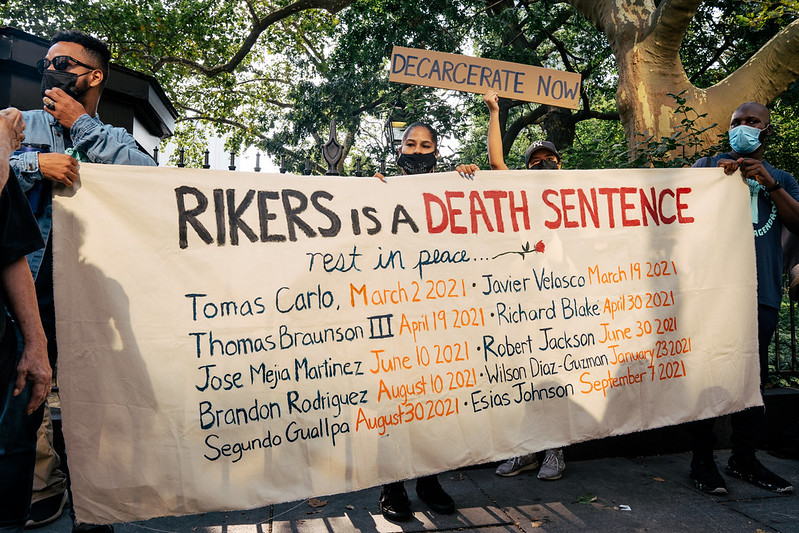 A dozen deaths at Rikers Island Jail this year alone. 5 suicides, some within days of one another. The debate on closing Rikers Island is quickly becoming less of a partisan issue and more of a human rights one. But this New York City jail complex is not unique in its inhumanity — rather, Rikers reflects the conditions of the overwhelming majority of state and federal jails, showcasing  the urgent need for prison abolition.

Rikers Island is New York’s largest jail, topping 400 acres and holding, on average, 10,000 inmates. It’s also well known as one of the worst correctional facilities in the nation. Many of the inmates have minor charges and otherwise clean records. Yet, they are put in life-threatening circumstances every day. Isaabdul Karim, for example, was a father of two, who used a wheelchair. He was put in Rikers for a trivial parole violation: changing his address without filing the proper paperwork. One day before his release, he died in custody due to neglect of medical care.

Rikers is unique in that they have one of the highest staff-to-inmate ratios in the nation. But horrific staffing management negates any potential benefit of this, and covid has only made things worse. An overwhelming number of officers called out sick in the early days of the pandemic. This led to officers being granted unlimited paid sick leave as part of their job benefits. But this has been getting abused: the average daily number of sick leaves more than doubled between July 2020 and July 2021. The number of officers not coming to work without calling in more than tripled over roughly the same time period. This has caused slowdowns within the prison, causing delays on distributing food, water, and medication. This is causing issues with the intake process as well. Detainees are essentially locked in cages; they are left without a bed for up to a week and forced to urinate and defecate in bags as there is no toilet in their room. Simply put, this staffing shortage is leading to a situation which denies these individuals basic human rights.

This staffing shortage is not unique to Rikers; all 50 states have reported understaffing at state prisons since 2017. This has caused violence in prisons to rise and cooks, nurses, and teachers to fill in and guard inmates. Despite the fact that understaffing has led to these horrific conditions and neglect of inmates, these statistics have been manipulated to advocate for more funding for prisons. However, an increase in money, which comes from taxes, is not going to improve the environment for detainees, as the issue pertains to the inherent structure and function of prisons. Public corrections is already an 81 billion dollar industry, yet still fails in rehabilitating inmates and restoring justice.

Because of the staffing crisis, officers have more job security, and in many cases this leads to them outright neglecting their job. This means they can and have been failing at completing their standard required checks and duties, such as keeping up with hygiene standards and providing inmates with proper medications with no repercussions or disciplinary action being taken against them. This blatant disregard for their basic job requirements proves their blatant disregard for inmates’ lives.

From garbage strewn floors to inmates being served rotten food, it is no secret that Rikers is a public health nightmare. These conditions are only exacerbated by the Covid-19 pandemic. The aforementioned staffing crisis made medical treatment nearly impossible for inmates. Throughout the pandemic, Rikers inmates with flu-like symptoms would typically wait roughly a week before being able to see a doctor, which is much too long to be able to diagnose and isolate cases.  In March 2021, 1/5th of scheduled doctor’s visits didn’t happen, totaling 12,914 in the month.

The health crisis extends beyond Rikers. A combination of inadequate healthcare, lack of nutritious food, and exposure to toxic water consistently threaten the physical health of inmates nationwide. Covid, nationwide as well, has presented its own issue, intensifying the health concerns. In nearly every prison in the nation, overcrowding has made social distancing impossible. Since the beginning of the pandemic, nine state prison systems have operated at over 100% capacity and 41 states are currently at 75% or more of their capacity. As such, covid outbreaks were far from rare. Between the start of the pandemic and June 2021, there were nearly 400,000 cases in prisons with over 2700 deaths. The rate of Covid-19 in jails is 5.5 times higher than in the general population.

The other health epidemic in prisons: the ongoing mental health crisis. Over 2 million of incarcerated individuals are diagnosed with mental illness, yet prison guards are not trained mental health providers. 83% of inmates with a mental illness go without access to proper treatment. The horrific prison conditions only deteriorate the mental health of prisoners further, leading to the already high suicide rates climbing even more. Prior to Covid, suicide was been the leading cause of death in prisons for years, proving that both the neglect of mental and physical health has murdered countless inmates.

And if this wasn’t horrific enough, Rikers officers have been using their position of power and security in their job to abuse and assault prisoners. Inmates have reported being stomped on, beaten brutally to unconsciousness and head trauma, and being sexually assaulted and raped.  In 2008, there was an orchestrated scheme where officers either recruited other inmates or they themselves would beat up adolescent inmates to the point of unconsciousness, head trauma, and in one case, death. While the individual officers were charged, no systemic changes were made to prevent this from happening again. In 2018, a similar scheme occurred where officers would use favored inmates to punish others. Victims report being transferred to housing units where they would be more vulnerable to attacks and where officers would allow other inmates in to their cell to steal their belongings and beat them. Between 2016 and 2019, the Rikers jail population was falling, yet the average number of times guards used force each month increased 54%.

The use of force against inmates is not solely found in Rikers. An observational study in male state prisons across the country has shown that 21% of inmates have experienced physical assault from a correctional officer and an additional 2% have experienced sexual assault. In comparison, 16% of inmates were observed to experience inmate-on-inmate violence. This year, two Alameda county sheriff deputies were convicted for “gassing”, the act of throwing bodily fluids, specifically urine and feces, on inmates. District Attorney Nancy O’Malley stated “there was no rational explanation for their actions aside from abject cruelty and a disregard for the humanity of the inmates.” However, it is important to note that a significant amount of assault cases go unreported  due to fear, allowing the guards to feel even more protected by the government. This begs the question, do prisons really reduce crime or redirect it and legalize it towards the incarcerated population?

In light of this, there is currently a massive movement calling for Rikers to be shut down. Members of Congress are calling for “immediate federal intervention” and closure of the jail to “to preserve the civil rights of those incarcerated.” As of right now, Rikers is still in operation, but with the intention of closing down completely by 2027. Mayor Bill De Blasio has promised to improve conditions at Rikers until then, such as hiring contractors to remodel the facility, hiring more medical staff, and suspending officers who do not show up. However, de Blasio has yet to take any action to support his promise. De Blasio has also called on judges to release the prisoners for technical, not violent crimes. Yet, he has the power to do this himself and has refused to do so.

But even if Rikers does close down, this fails to address the underlying problem: United States prisons are inherently inhumane and do not rehabilitate inmates nor reduce crime.  40% of the incarcerated will reoffend and end up back in jail within 3 years of their release, questioning the advantage of prisons in the first place. Locking up individuals in inhumane conditions has proven to be ineffective in comparison to alternatives, and to appeal to neoliberals, a waste of taxpayer dollars.

Our prison system goes against essentially every value that Americans pride themselves on; it deprives our citizens of basic necessities, liveable conditions, and even the right to life. Therefore, prisons violate the Eighth Amendment: prohibiting cruel and unusual punishment. The government’s hands are drenched in blood from the thousands of inmates that have died due to their neglect and abuse, yet they continuously get away with it. We must take direct immediate action to prevent the murder of more of our fellow Americans who have fell victim to horrific incarceration system, which has turned into a death sentence.