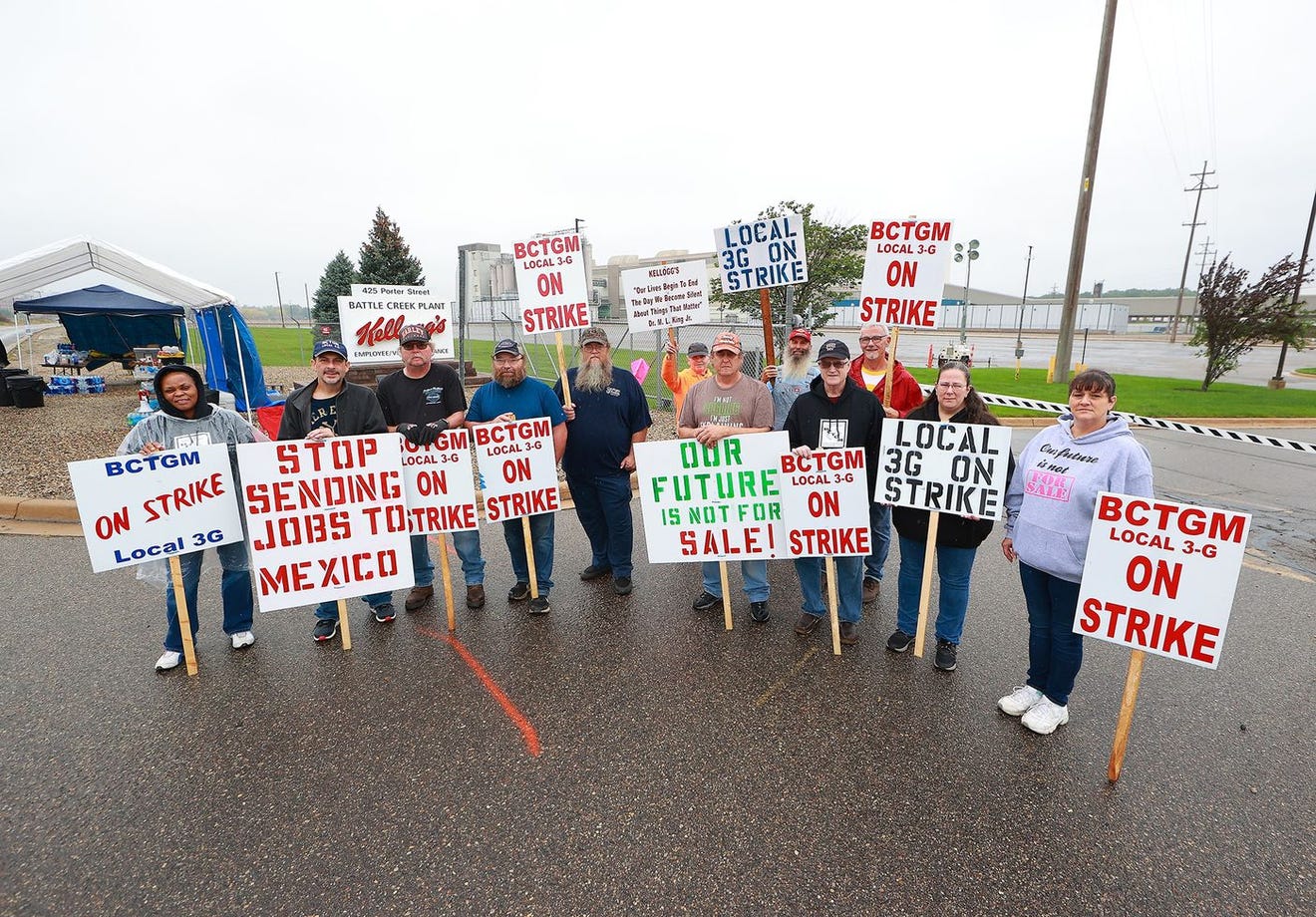 By Jenessa Henderson on November 2, 2021

“55 strong!” chanted members of the West Virginia school system, as teachers and school staff from all fifty-five counties in the state went on strike in 2018. This strike was calling for a needed pay increase for West Virginia teachers, whose compensation is ranked 48th in the nation, as well as a need for better, more secure health insurance. The West Virginia teachers, whose demands were met after thirteen days, inspired similar strikes across the nation. There were statewide strikes in Oklahoma and Arizona, and local efforts in Los Angeles, Colorado, North Carolina, and Virginia.

“Make no mistake about it. They want the voice of the working class citizens to be gone. If you are not a member of a labor union, you better become one,” said then-West Virginia state senator Richard Ojeda at the state’s strike.

The teacher’s strikes are just the tip of the organizing iceberg — the pandemic and increasing income inequality have inspired members of the nation’s working class to stand in solidarity with one another, creating a sort of movement we have not seen in decades.

The decline of labor unions

Globalization and the invention of new technologies in the 20th century undoubtedly encouraged the decrease in union density. When there are less individuals employed in the union-dominated manufacturing sector, union membership will obviously decrease, as those workers are replaced with machinery. However, this isn’t always the case. According to the Organisation for Economic Co-operation and Development’s Economic Outlook, an annual publication reviewing economic conditions and trends in developed nations, in Scandinavian countries such as Denmark, Sweden, and Finland, union membership was around 65% as of 2017. Meanwhile, in the United States, union membership hovers around 10.8% as of 2020. So, what exactly happened?

The mid-to-late 20th century is seen as a turning point for unions, as this period brought two notable setbacks to labor organizing: the passage of the Taft-Hartley Act in 1947 and a failure to effectively unionize the South.

The Taft-Hartley Act placed a multitude of restrictions on unions, many of which still exist today. It prohibited secondary and “sympathy” boycotts and opened the door to right-to-work laws, policies currently existing in 27 states. The act also required union leaders to sign affidavits stating that they weren’t communist sympathizers, and failure to do so would result in them losing many of the protections granted to them by the Wagner Act of 1935, a landmark labor law establishing the National Labor Relations Board and guaranteeing workers the right to organize. The legislation also passed during an inopportune time, as labor unions were in the middle of “Operation Dixie,” an effort to unionize the Southern states’ massive textile industry. The operation failed as a result of anti-union leaders’ anti-communist sentiments, as well as Southern whites increasing their opposition towards unions because they feared desegregation.

Later, the dominant economic forces of the 1970s and 80s prompted skyrocketing unemployment, resulting in 21.2% of blue-collar workers losing their jobs between 1981 and 1983. In the face of such instability, companies found that workers in the manufacturing sector were both more willing to accept lower wages than they might have previously been, and more receptive to warnings that unionization campaigns could jeopardize their job security.

The resurgence of labor organizing

With accelerating wealth inequality, essential workers organizing for pandemic protections, and President Joe Biden promising to be “the most pro-union president you’ve ever seen,” the popularity of labor unions is beginning to rise once again. Researchers at MIT found in 2018 that 48% of nonunion workers would join a union if they could — representing around 58 million workers. In addition, Gallup estimates that as of 2020, 65% of Americans approve of labor unions. “Now, unions are at an all-time high when it comes to favorability ratings… Half the workforce said they would join a union today if given the opportunity because they know that without the power of a union, workers are helpless,” claimed Richard Trumka, the former president of the AFL-CIO, the largest federation of unions in the United States.

The pandemic has amplified support for unions even more, as it showcased how vulnerable workers are without the support of a union. Many essential workers were incapable of getting PPE from their employers, yet unions were able to get them.

“For years and years and years, people that we call ‘essential workers’ were invisible. It was as if no one knew they existed. They did their jobs every day to keep the country and the economy going. And then Covid came and everybody was staying home except people they called ‘essential workers,’ people that were driving buses, delivering food, and taking care of sick people, and making us better,” stated Trumka. “Now people see those workers and the dignity that they represent.”

Frito-Lay has a contract with the Local 218 chapter of the Bakery, Confectionery, Tobacco Workers and Grain Millers International Union (BCTGM) in  Topeka, Kansas, in which over 600 of the nearly 800 employees are members. By 2021, employees were working as many as 12 hour days, 7 days a week, under mandatory overtime, which workers had referred to as “suicide shifts”. In addition, wages had been stagnant for 15 years, and a new contract only promised a low 2% pay increase, with some members stating that their salaries had only been raised 77 cents in the past 12 years. Finally, after contract negotiations between the union and the company fell through, members went on strike. The strike began on July 5th of this year, with over 80% of the Local 218 chapter participating. It was the first time this chapter went on strike since 1973. The strike ended on July 23rd, with Frito-Lay guaranteeing one off day a week and doing away with “suicide shifts”, although mandatory overtime is still in effect.

Employees working for Nabisco, a subsidiary of Mondelez International, known for creating products such as Oreos and Ritz Crackers, are also members of BCTGM. Nabisco announced in 2018 that they would no longer be offering pension benefits and would instead institute a 401(k) program, which was a point of contention with the union. There were also fears on the factory floor that workers’  jobs could be outsourced to recently opened plants in Mexico, in spite of Nabisco denying these possibilities. After Nabisco closed two food processing facilities in mid-2021 amidst the coronavirus pandemic, over 1,000 jobs were lost and the contracts between Nabisco and workers in various locations had expired with no plans of updates. In addition, numerous workers stated that during the pandemic, it wasn’t uncommon to work 12-16 hour shifts 6-7 days a week, and there was a possibility of having a $10,000 a year pay decrease. All of these factors culminated in a month-long strike from August to September of this year over contract disagreements. This was the first time Nabisco workers went on strike in 52 years. Strikers demanded guarantees against outsourcing, blocking changes to scheduling and working overtime, and better healthcare. After striking for 1 month, 1 week, and 1 day, the company and the union reached a tentative agreement which gave the strikers a $5,000 bonus, annual pay raises, and increased 401(k) contributions.

As evidenced by the previous examples, the US is sort of going through a strike wave — there are new ongoing strikes occurring around the country practically every day with the possibility of tens of thousands of strikes to come in the coming weeks, and these strikes aren’t confined to just factory workers. There are planned work stoppages ranging from traditional factories to hospital workers, people in the entertainment industry, and on college campuses.

It is all the result of changing worker-employee relationships, especially as a result of the pandemic which made the inequality between the two incredibly clear. The upside-down condition of the job market has led fed-up workers to be more inclined to fight back and call out their bosses on their threats, whatever they may be. Not to mention, the fact that so many employers are desperate for labor in 2021 has given workers who choose to strike a potential safety net that didn’t exist a generation ago.

The looming strike wave also shines a light on the broader debate in American politics nowadays — what is the best way to elevate an American middle class that’s seen smaller opportunities for growth since 1980? Almost all of the focus has been on Capitol Hill, where President Biden’s $350-billion-a-year “human infrastructure” plan is the current subject of typical Washington divisiveness. But while key components of the Biden plan — expanded child care, expanded Medicare, paid family sick leave, free community college — would be a huge boost, the efforts by the nation’s shrunken labor unions to reassert some power are a reminder that government isn’t the only way to save the working class. The working class can most certainly save itself, through organizing, standing in solidarity with one another, and fighting back against corporate greed.