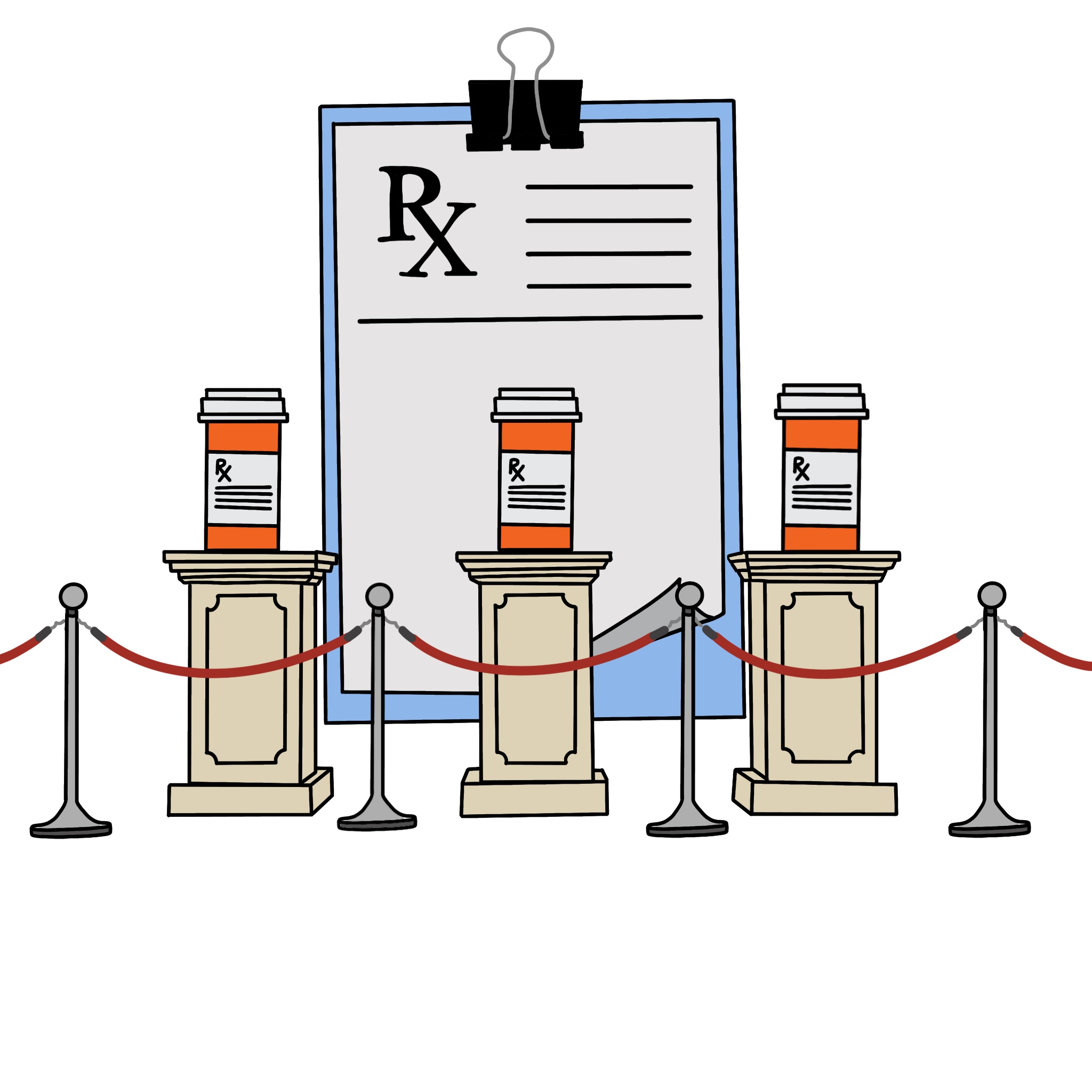 When a Diagnosis is a Privilege

Marcus was only 16 years old when he realized something was wrong. He’d sit in class unable to pay attention, twiddling his thumbs, shaking his leg, constantly confronting a rapid stream of unwanted, unwelcome thoughts. This feeling of uneasiness was no longer a transitory state, but one that began to dictate his entire life. Once he had decided these thoughts were too disruptive for his day-to-day life, he sought treatment. Over time, with the help of medical treatment and guidance from his doctor, he had a better understanding and control of his condition. It was a generalized anxiety disorder.

Marcus is one of the 40 million in the U.S. that is diagnosed with anxiety. In 2019, nearly 51.9 million of the U.S. population was diagnosed with a mental illness, ranging from depression to borderline personality disorder. Medical experts actually estimate that millions of more Americans experience some sort of mental illness, but remain professionally undiagnosed and untreated. While accessing mental health services is no quick cure for mental illness like an antibiotic is for an infection, high-quality mental health care has been proven to help those suffering, as was the case with Marcus, who could afford care. Although this of course depends on the severity of one’s mental illness, high quality mental healthcare should be easy to access for those who seek it.

However, as with seeking general healthcare, it isn’t. As a matter of fact, there are certain populations that have disproportionately low access to mental health services. Racial and ethnic minorities, alongside low-income individuals, have less access to mental healthcare than wealthier white Americans. In addition, these groups are also less likely to voluntarily seek out help for any mental disorders. Both a lack of accessibility and lack of initiative contribute to these disparities in mental healthcare.

“There are many different conflicts that prevent someone from seeking help,” says Claire Yu, mental health activist at Stanford with vast experience working with a variety of mental health organizations, such as the Asian Mental Health Project and the Asian Mental Health Collective. She continues, “Religion and spiritual bypassing, income and affordability, and stigmatization of mental health treatments are just some of the main reasons. In fact… skepticism in the psychiatry field is rampant, and that can be enough.”

However, even when minority groups seek mental health services, there are evident disparities in the quality of the counseling that they receive. This is mostly due to the fact that many providers are not readily equipped to serve the specific needs of the diverse populations in the U.S. Yu sheds light on this specific barrier that minority groups face — the fact that many mental healthcare providers and social workers can lack the “cultural competence” to treat patients from different cultural backgrounds. Yu states, “A counselor might use terms that minorities don’t understand. And even if they do understand, what the counselor is saying might not resonate with them due to cultural barriers…” This lack of cultural understanding can ultimately prevent someone from continuing therapy. “It’s likely they won’t come back after one visit just because of that experience with that counselor,” Yu says, “They’ll decide it’s not for them because of one counselor who didn’t speak the same language as them, both literally and metaphorically.” This absence of cultural competence in a mental healthcare setting has effects across all racial minority groups. Hispanic Americans often face language barriers, African Americans are prone to dealing with stigma, and indigenous groups may encounter a lack of cultural understanding from mental healthcare providers.

In consequence, these cultural barriers greatly impact the deliverance of mental health services that minority groups receive. For instance, studies have actually shown that physicians were much less likely to identify the severity of depression in minority patients versus white patients. The problem of misdiagnosis has been especially prominent in the Black population. One study found that African Americans are also less likely to be diagnosed with mood disorders such as depression, while another study concluded that African Americans with severe depression are often misdiagnosed with schizophrenia. As a result, African Americans are diagnosed with schizophrenia at a higher rate than the general population, and many receive improper treatment for their illness. Thus, not all diagnoses are equal.

What remedies are there for this grave disparity? A potential (though partial) solution is greater outreach promoting mental health education among those populations with more barriers to mental healthcare. For instance, in 2004, California passed the Mental Health Services Act (MHSA), which included campaigning efforts to reduce stigma surrounding mental health illness in underserved communities of color. But while launching social media campaigns and raising awareness of mental disorders are important, they are merely temporary bandage solutions on a gaping wound of an issue. Nearly 17 years after the MHSA, counties throughout California still have to confront the lack of availability of mental health service providers. This is because disparities in high-quality mental healthcare are deeply rooted in our own healthcare systems.

For one, mental health parity, which describes the “equal treatment of mental health conditions and substance use disorders in insurance plans,” has not been evident in our healthcare system despite federal laws and regulations in recent years. For instance, the Mental Health Parity and Addiction Equity Act (MHPAEA) in 2008 strived to make mental illness and substance use coverage equal to surgical and medical coverage, in effort to make mental health care more accessible. In 2013, the federal government furthered this mission by issuing official guidelines for how to enforce the MHPAEA, creating a specific criteria for which different health insurance plans are subject to the law.

Despite these steps in the right direction, these mental health parity laws are mostly symbolic. According to the National Alliance on Mental Illness (NAMI), parity laws “mean nothing without network adequacy.” NAMI defines network adequacy as when a health insurance plan has “enough in-network providers to meet the needs of the plan’s members in a geographic area.” In-network providers are a web of doctors, facilities, and pharmacies that you automatically have access to under a certain health insurance plan, whose services you can access at a pre-negotiated cost.

Many plans actually lack in-network providers for mental health services. According to the Kaiser Family Foundation, the “vast majority of states have met less than 50% of mental health care needs among their populations.” A 2019 report found that a behavioral health office visit is over five times more likely to be out-of-network than a primary care appointment. Therefore, when people seek psychiatric help, they are most likely traveling further, waiting longer, and paying more. This is inconvenient for anyone seeking help; and can have especially disproportionate effects on certain populations, such as those who cannot afford to take off work, pay for childcare, drive their own car, or burden the gargantuan co-pays. It’s also worth noting that psychiatric offices don’t tend to be situated in low-income zip codes. All together, these myriad factors make it almost certain that minority groups don’t have adequate access to mental healthcare.

As discussed, there is not only the problem of accessibility to mental healthcare, but also disparities in the quality of treatment. If mental healthcare is to become more accessible to underserved communities, we need to equip providers with the adequate resources to become more culturally qualified to serve the unique needs of different minority groups. Although various professional organizations like the American Psychology Association (APA) and the Association for Multicultural Counseling and Development (AMCD) emphasize the importance of cultural competence within their guidelines, they tend to lack cultural specificity. By lumping all minority groups together as a monolith, mental healthcare providers become less prepared to successfully serve these different communities. There must be more comprehensive research, training, and resources to resolve this issue, in order to assure that the mental health counseling and treatments these communities receive are best equipped to treat their illnesses.

The need to address these mental healthcare disparities has only become more urgent, given that mental health challenges have only been exacerbated during the current pandemic. In fact, in a survey conducted by the CDC in June 2020, suicide ideation was reportedly much higher among Blacks and Hispanics, demonstrating  the need for greater accessibility to high-quality mental health services for populations with disproportionately low access.

Additionally, as we continue to fight anti-Black police violence and grapple with the appalling rise of anti-Asian hate crimes throughout the U.S., it becomes even more pressing to address these disparities to assure that these communities that are prone to experiencing racial trauma can receive the help they need. As we advocate for more anti-racist policies to combat this systemic and institutional racism, it is critical that we include equal access to high-quality mental healthcare as part of our agenda. This disproportionate access and quality of mental healthcare is a critical racial inequality. Therefore, when we push for equal access to mental healthcare, we also push for more racial equality.

Although the conversation surrounding mental health has clearly become much more normalized among the younger populations and in mainstream media, it is important to remember that there is still much work to be done. As Yu puts it, “Everyone is comfortable with [talking about] mental health, but no one is comfortable with mental illness.” Marcus, mentioned at the beginning of the article, suffered from debilitating anxiety for almost an entire year before seeking help because of the stigma surrounding mental illness. However, as mentioned, receiving exceptional care and support from his providers had drastically changed his life for the better. It will require national effort to assure that every individual has the same access to high-quality mental healthcare as Marcus did. And as the last year of racial unrest and anguish has taught us, these policies to address these disparities must go farther than colorblindness, and must specifically address historic racial disparities to be truly effective.