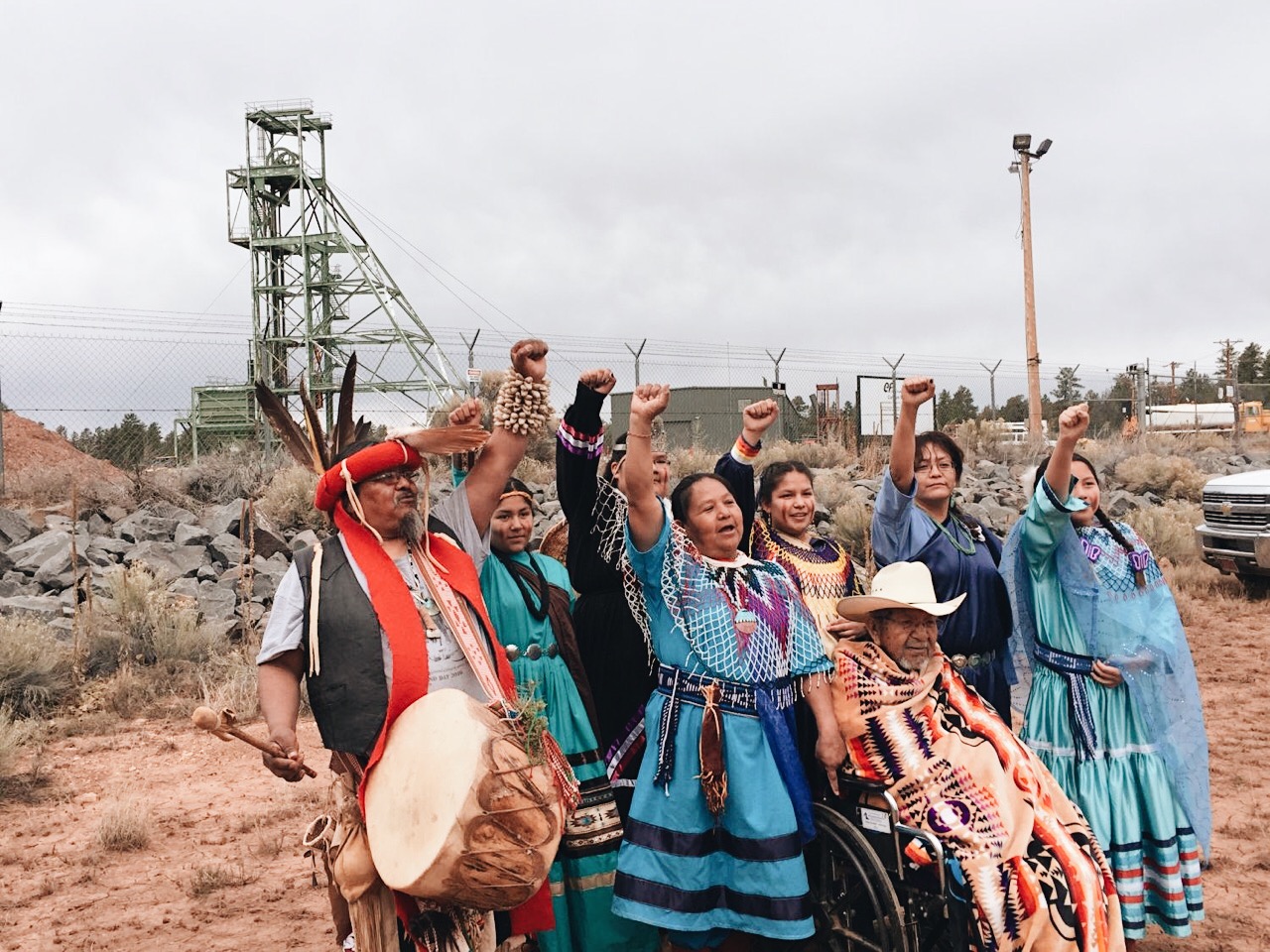 The Lasting Harms of Toxic Exposure in Native American Communities

“They never told us uranium was dangerous. We washed our faces in it. We drank in it. We ate in it. It was sweet,” explained Cecilia Joe, an 85-year-old Navajo woman, in a recent interview. Joe’s experience illustrates the under-researched but extremely pervasive problem of environmental injustice on Native American reservations.

Due to decades of harmful environmental policy and exploitation by private companies, Native communities have been disproportionately subjected to toxic waste, pollution and other health risks — leading to what some activists describe as “environmental genocide.” Out of all the ethnic groups in the United States, Native Americans are the most at risk of toxic exposure, a fact that reflects broader realities about the continued oppression of Native communities and has galvanized Native activists into seeking justice.

While the word “reservation” may invoke ideas of protection or sanctuary, historically, Native American reservations have systematically been targeted as sites for toxic waste disposal, and the U.S. government has historically been indifferent towards this. Companies “hoping to take advantage of the devastating chronic unemployment, pervasive poverty, and sovereign status of Indian nations” offer millions of dollars to Native American tribes in exchange for the ability to dispose of toxic waste, according to Bradley Angel in a report for the environmental organization Greenpeace.

Native American reservations have some of the highest poverty rates in the country, and may feel inclined to accept these companies’ financial offers, despite the ensuing environmental degradation and health impacts. For instance, some residents of the Skull Valley Indian Reservation actually support the storage of nuclear waste on their land because of the economic opportunities it will create, while other residents are adamantly opposed to it. As a result, Native Americans are 1.8 times more likely than any other ethnic group to live near toxic waste facilities.

For instance, the Yakama Nation, a tribe located in southwest Washington, is surrounded on three sides by Superfund sites — areas designated by the U.S. government as the most contaminated and polluted locations in the country. Portland Harbor, which the tribe relies on for fish and other resources, has been heavily contaminated by petroleum, pesticides and other toxic chemicals at levels dangerous to human health, forcing the Yakama people to restructure their way of life. Although the Yakama Nation has been advocating for Portland Harbor to be cleaned up for over thirty years, the companies responsible for the contamination have continually delayed and obstructed the cleanup.

Toxic exposure has led to devastating and long-lasting health impacts in Native American communities. Members of the Mohawk Nation at Akwesasne have historically fished in the St. Lawrence River in New York, which has been contaminated by hydraulic fluids leaking from aluminum factories in the area. As a result, the Mohawk people have consistently been found to have elevated levels of polychlorinated biphenyls (PCBs) in their bloodstreams, which has caused them to have a higher risk of diabetes and cancer.

Similarly, the Yupik people of St. Lawrence Island in Alaska have PCB levels in their blood that are 4 -12 times higher than the levels of the general U.S. population, presumably because of hazardous waste from abandoned military sites — leading to increases in cancer rates, birth defects, and miscarriages. In the late 1990s, Yupik environmental activist Annie Alowa asked the U.S. Army Corps of Engineers to clean up the military base on the northeast part of the island, highlighting the impact on her community’s health, but her concerns were dismissed. Alowa, who died of cancer in 1999, claimed that her breast cancer and liver cancer were a direct result of environmental contaminants on the island.

The legacy of environmental racism towards Native Americans is also inseparable from the United States’ history of nuclear development and military innovation. From the 1940s to the 1980s, the Navajo Nation was one of the most plentiful uranium mining sites in the country — the U.S. government extracted over four million tons of uranium ore from sites on the reservation to make nuclear weapons. Navajo people who lived near uranium mines were not warned about the hazards of radiation, and experienced alarmingly high rates of lung cancer, leukemia, kidney disease, birth defects and several other health issues. Mining companies later abandoned these mines without cleaning up the large quantities of uranium on the reservation; even today, the Navajo people continue to suffer adverse health effects related to radiation. The Oglala Lakota people living at the Pine Ridge Indian Reservation in South Dakota, which also has an extensive history of uranium mining, have a cancer mortality rate that is 40 percent higher than that of the overall population.

In the 1960s, the U.S. government tested dioxin, a chemical used in Agent Orange, on the lands of the San Carlos Apache Tribe in Arizona. Exposure to Agent Orange, a powerful chemical herbicide used to control vegetation during the Vietnam War, famously led to catastrophic health complications for Vietnam veterans. Members of the San Carlos Apache Tribe tribe claim that this dioxin experimentation  led to similarly devastating illnesses and health complications in their own community, including cancer, heart disease, and neurological disorders.

And at the Dugway Proving Ground, located immediately outside the Skull Valley Indian Reservation, the U.S. government has tested VX, an extremely toxic military-grade poison gas, for decades. In 1968, over 6,000 sheep owned by Skull Valley Goshute Native Americans died after exposure to this nerve agent — yet the military continues to conduct experiments there, despite the obvious health and safety risks to the reservation’s residents.

The extent of toxic exposure in Native communities reflects the U.S. government’s tendency to view Native American reservations, and by extension, Native American people, as expendable. Since this country’s inception, Native American policy in the United States has largely been characterized by violence, abandonment, and disinvestment — it comes as no surprise that the government (with the support of private companies) values profit and resources over the health and well-being of the people it has oppressed for centuries. Although toxic waste exposure might not seem like an intentional or malicious attempt to harm Native American communities, the systematic exploitation of Native land and the lack of attention given to the ensuing health effects represents this country’s callous disregard for some of its most vulnerable citizens.

Despite the seemingly irreparable harm that has already been committed, some Native activists still see potential paths to achieving environmental justice. The recent confirmation of Deb Haaland — the first-ever Native American Cabinet Secretary — as the Secretary of the Interior signals the willingness of the Biden Administration to address issues affecting Native communities, including toxic exposure. While the Interior department has historically been used as a tool of oppression towards Native Americans, Haaland has displayed a strong commitment towards advancing environmental justice and prioritizing Native voices.

Native Americans affected by toxic exposure have also frequently turned to the courts to seek compensation for the harm that they have experienced. The Navajo Nation, for example, obtained a settlement of $600 million from two nuclear companies to clean up abandoned uranium mines. Similarly, the Yakama Nation filed a lawsuit against several polluting companies and government entities, including ExxonMobil and the City of Portland, seeking reimbursement for the hundreds of thousands of dollars it will cost to clean up the Portland Harbor.

In 1997, thousands of Native American individuals living near the Hanford Nuclear Facility in Washington filed a class action lawsuit against the U.S. government for “infliction of radiological injuries,” seeking damages for the health issues caused by the facility’s radiation. While this case was set to be heard by a jury, the jury trial was cancelled in 2013, with plaintiffs receiving undisclosed monetary settlements from the Hanford contractors after nearly twenty years of negotiations. Although no amount of money can necessarily compensate for the trauma inflicted by environmental injustice, litigation can potentially help achieve access to justice for Native communities harmed by pollution and contamination.

For instance, in the late 1980s, Navajo activists formed a group called Diné Citizens Against Ruining our Environment (CARE), which successfully fought the construction of a proposed toxic waste facility on Navajo land in Arizona. In the early 2000s, the Western Shoshone tribe in Nevada put up an impassioned, years-long fight against a nuclear waste storage facility at Yucca Mountain — the protesters were eventually successful as the project was defunded by the Obama Administration in 2010. And in the mid-2010s, Sioux activists at the Standing Rock Indian Reservation drew national attention to their efforts organizing against the Dakota Access Pipeline, though this protest was ultimately unsuccessful in stopping the pipeline.

Policy solutions that might help address the toxic waste crisis on Native American reservations include banning toxic waste dumping on reservations and passing legislation that prohibits polluting entities, such as nuclear facilities or hazardous waste incinerators, from being near reservations. The U.S. government should also economically invest in Native American communities so that reservations are not financially pressured to accept money from corporations who want to dispose of waste. The Indian Health Service, a division of the Department of Health and Human Services that is responsible for providing federal health services to Native Americans, can establish an office or task force dedicated to preventing health problems that arise from environmental injustice. Lastly, providing monetary reparations to survivors of toxic exposure can help mitigate the lasting harm caused by environmental injustice, especially since the government’s approach has historically been to ignore and neglect these problems.

Addressing the harm inflicted by toxic exposure on Native American reservations will require sustained and equitable policy approaches that prioritize the interests of individuals over the interests of corporations. Above all else, the diseases and deaths caused by exposure to toxic chemicals on Native land serve as a stark reminder of the injustice that has been inflicted on Native Americans by the government and private companies for centuries.