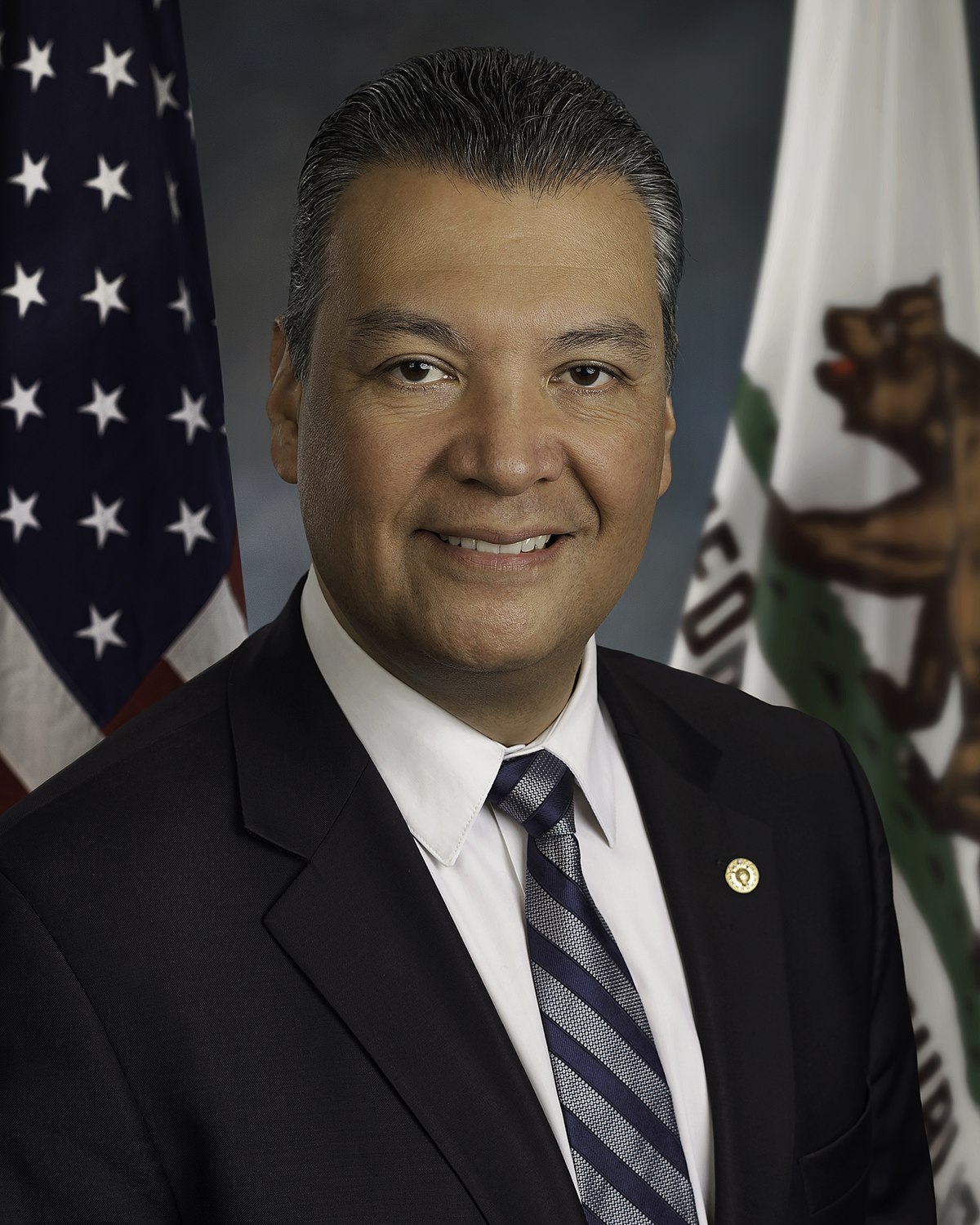 With Kamala Harris as our new Vice President, California’s constituents were fervently waiting to see who Governor Gavin Newsom would choose to fill Harris’ seat as California’s senator. After much anticipation and speculation, Governor Newsom announced that he was electing California’s Secretary of State Alex Padilla for the esteemed position. On January 20, 2021, 47 year-old Padilla was sworn in, making history as California’s first Latino senator.

As a child, Senator Padilla never thought he would pursue a professional political career. In fact, Padilla planned to be an engineer, earning a bachelor’s degree in Mechanical Engineering from the Massachusetts Institute of Technology in 1994. However, California’s Proposition 187 inspired him to enter the realm of politics. Prop. 187 was on the general election ballot in California in 1994, aiming to exclude undocumented immigrants from public benefits. When the proposition was approved, Padilla felt that he “had to get involved so that families like [his], communities like [his], would not continue to be scapegoated or targeted,” as he told CalMatters in 2018.

fake id california In order to purchase alcohol or enter a bar, a person must present a form of identification. In the state of California, you are required to have one of the following forms: a drivers license, learners permit, identification card issued by the department of motor vehicles (DMV), passport or other government-issued photo ID. Fake ID’s are a serious problem that is not just affecting high school students. In fact, the use of fake ID’s has expanded much into the adult world. Senators in Washington D.C. have been using them to get through security and enter buildings for years, and many other people are using them to conduct everyday activities including voting.

During his past positions, Padilla has had many political wins. As California State Senator, Padilla passed more than seventy bills. One of the bills he authored was a legislation to ban single-use plastic bags. When Governor Jerry Brown signed this in 2014, it became one of Padilla’s most controversial bills. In 2016, the matter was taken to the California ballot to vote on, since there was so much backlash. However, this attempt to override Padilla’s legislation was unsuccessful. When you go to stores, and they provide you with cloth bags instead of plastic ones; that is a testament to Padilla’s legislation as Secretary of State.

Another legislation that Padilla successfully authored required chain restaurants in California to display the calorie count of each item on the menu. This law, which Governor Arnold Schwarzenegger signed in 2008, served to empower Californians with reliable and accessible nutritional information so they could make informed nutritional choices. We can still see the lasting effects of both these California bills today, and they help protect the environment and offer nutritional transparency.

As California’s Secretary of State, Padilla worked on making elections more accessible and inclusive. In 2016, he sponsored the Voter’s Choice Act which allowed countries to conduct elections under a new model which allowed voters to choose how, when, and where to cast their ballot. Under this bill, every registered voter received a mailing ballot 28 days before election, in-person early voting was expanded, voters could cast a ballot at any vote center in their county instead of being tied to a single location, and counties were required to hold voting education workshops. Padilla also sponsored the New Motor Voter Act in 2015. This registered every eligible citizen who went to the Department of Motor Vehicles (DMV) office to get a driver’s license or renew one. Additionally, the VoteCal statewide voter registration database project was completed and certified by Padilla in 2016. This created a centralized voter registration database that all 58 Californian counties could use during the voter registration process. It became more convenient for sixteen and seventeen year-olds to pre-register to vote and to take advantage of Election Day voter registration. All these efforts proved to have substantial results, as a record 17.8 million Californians voted in the 2020 election.

As a California Senator, we can expect Padilla to use his position to voice the concerns of the Latinx community, and he is already beginning to do so. He was named chair of the Subcommittee on Immigration, Citizenship and Border Safety, which oversees immigration policy, allowing him to have significant authority over legislation in the committee. Padilla’s first legislation since arriving in the Senate is called the Citizenship for Essential Workers Act, a bill that would offer citizenship to over 5 million immigrant essential workers and their families. The bill is co-sponsored by Senator Elizabeth Warren of Massachusetts, Representative Joaquin Castro of Texas, and Representative Ted Lieu of California. The bill is likely to be opposed by Republicans in the Senate and supported by Democrats.

Padilla also supports abolishing the filibuster, has called for removing Republican Senators Josh Hawley of Missouri and Ted Cruz of Texas for their role in the Jan. 6 Capitol riot, and has stated that he wants California to be an example for climate change reform.

Despite his current and past political achievements, why did Newsom ultimately choose Padilla as his Senator pick? In a video call, Newsom stated that he focused on character when choosing Padilla for the esteemed role: “Of course competency matters, of course technical expertise matters, but character matters as well,” he said. While this may have been part of the reason, this answer doesn’t fully encompass the reasons Newsom chose Padilla. Firstly, Newsom and Padilla have been political allies since 2010. When Newsom first ran for governor in 2010, Padilla offered Newsom his endorsement, helping Newsom attract Latino voters. Although Newsom wasn’t elected to the position in 2010, Padilla also offered his endorsement for Newsom’s successful 2017 campaign. This seemed to be the start of a mutually beneficial political alliance. Additionally, as a political opportunist, Newsom would not miss the opportunity to make history. Newsom earned political clout by selecting California’s first Latinx senator.

However, Newsom did receive backlash within the Democratic Party for appointing Padilla to the position. Some Democrats believed the position should have been filled by a Black woman. Specifically, many African Americans were rooting for Representative Karen Bass or Congresswoman Barbara Lee to replace Harris. With Padilla replacing Harris, there are currently no Black women in the 100-member Senate. Aimee Allison, a columnist at Newsweek, tweeted that Newsom’s decision leaves the nation “with one less woman and now not a single Black woman in the United States Senate, chipping away at decades of progress that have been made to ensure our United States Senate looks like the America it represents.” Some people believe that part of the reason Newsom elected Assembly Member Shirley Weber to fill Senator Padilla’s former role as Secretary of State was because of the criticism he received for not appointing a Black woman to the Senate.

It is not surprising  that Newsom went with Padilla for his Senate pick. Firstly, there was no doubt that a Democrat was going to be selected for the position. Secondly, their personal history in conjunction with Newsom’s desire to create Californian history made this an ideal appointment for Newsom. Lastly, Padilla is a respectable politician with significant past political achievements and positions. However, it will be interesting to see the long-term repercussions of Padilla’s appointment. With Black women voters at odds with Padilla’s selection, Padilla will have to earn their support in order to win re-election in two years. Otherwise, they will endorse a candidate that they know will represent their interests in the Senate.

Padilla’s election also reflects a larger trend in California politics, with government representation looking more like the constituents they represent. In California, Latinx residents make up 40 percent of the population. In representing a little less than half of California’s population, the Latinx community finally has one of their own in office to look out for their interests. Because the Latinx community is so prominent in California, Padilla is likely to be a Senator that is here for the long run, not just the two years he has remaining in this term.