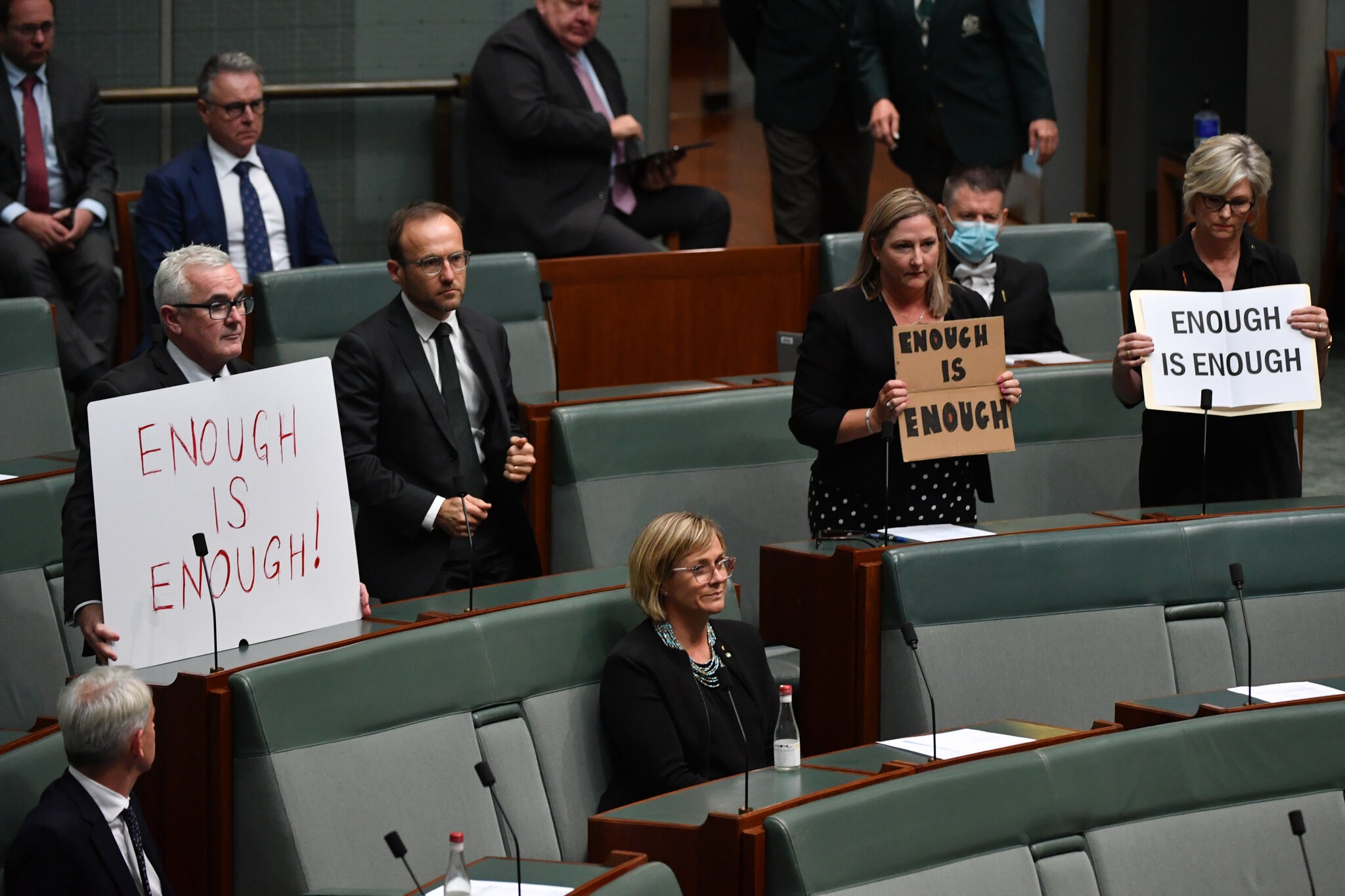 Australian #MeToo Movement in full force: Sexual abuse survivors protest from the streets of Canberra to the halls of Parliament

In early March 2021, Australian Attorney General Christian Porter announced that he would be taking “a short period of leave” since being accused of raping a 16-year old girl in 1988, despite denying the allegation. Recently, current and former female employees of the Australian Parliament have also attested to sexually inappropriate and misogynistic behavior as prevalent workplace culture in the halls of Parliament. Julia Banks, a member of the Australian Parliament, described the government as “the most unsafe workplace in the country.” According to Banks, many male colleagues regularly consumed alcohol at work and nonconsensually rubbed down new female interns on their backs. Australia’s #MeToo Movement is currently in full force, after Brittany Higgins, a former legislative employee at the Australian Parliament, accused her male boss of raping her in the Australian Prime Minister’s office. Higgins originally went to Australian police in 2018, but dropped the case as she feared losing her job, until this year. Unfortunately, Higgins has since left her job, with her partner following in her footsteps due to fears of being shut out by cabinet members. Upon Higgins’s public allegation, many other women in Australian Parliament have come forward detailing their own stories about sexual assault and the government’s misogynistic workplace environment, and it has been evident that sexual assault is particularly prevalent in the conservative Liberal Party. Additionally, three other women have stated that the man who raped Higgins, a former Liberal Party employee, also sexually assaulted them. One of the three women alleged that just after finishing high school, she met up with the man, who bought her several shots of tequila and vodka, and offered to look after her in his hotel room. After waking up in the morning, she found herself in his bed, half-undressed, with the man on top of her.

In response to the public allegations, Australian Prime Minister Morrison apologized for the assaults, and prompted investigations about Higgins’s attack, workplace culture, what his office knew about Higgin’s rape at the time, and how sexual abuse allegations were handled by the Australian Parliament. While critics questioned this, Morrison claimed to have found out about the alleged rape on February 12, 2021, and failed to take adequate action earlier in order to bring justice to Higgins. Many women, allies and activists disapproved of the Prime Minister’s response, some also calling it lackluster. Rachael Burgin, a lecturer of criminology at the Swinburne University of Technology, described Prime Minister Morrison’s investigation like “a political Band-Aid” as it did not include initiatives for reform of the misogynistic and dangerous workplace that is pervasive in the halls of the Australian Parliament. Other members of Parliament were criticized for their poor handling of the rape allegations as well. Defense Minister Linda Reynolds apologized for holding a meeting to discuss Higgins’s assault in the same room that Higgins was attacked, and cancelled a much-anticipated appearance at the National Press Club to answer questions regarding her handling of Higgins’s rape allegations. Reynolds announced pre-existing medical conditions as the reason for the cancellation. Higgins also threatened to sue Reynolds as Defense Minister for defamation—Reynolds allegedly called Higgins a “lying cow” in her private office, and has not directly denied this comment.

Interestingly, Higgins’s assault was not the first time that Morrison faced backlash on his handling of sexual abuse allegations. In March 2021, photos and videos of male Liberal Party members masturbating onto the desks of female Parliament members surfaced, and only one has been fired. In addition to this, it was revealed in March 2021 that Liberal Official Andrew Laming was accused of sexually harassing two female legislative workers on Facebook over a period of six years. Amid the controversy, Laming agreed not to run for his position again. As a result of taking a rather passive stance in response to these instances of sexual abuse, Morrison had been criticized for failing to take action and fire the officials accused of sexual abuse. In response to the leakage of old diary excerpts written by the 16-year old rape victim of Attorney General Christian Porter, Morrison waited three days to make a public statement about the allegations and discharge Porter. Ultimately, Morrison did not do either, accepted Porter’s denial of the alleged rape, and has come under fire for his inaction.

While Australia had a #MeToo Movement in 2017, the Australian movement was restricted by the country’s strict defamation laws, which are one of the world’s most stringent regulations. Unlike the United States #MeTooMovement, where the burden lies on public figures accused of harassment to prove that the defaming statement against them is false, Australian survivors are tasked with the opposite responsibility. Specifically, Australian accusers have to prove that their claim is true, already bearing the burden of proof, which means that a sexual violence survivor’s abuser is treated as innocent until proven guilty. This prompts many Australian survivors to stay silent about their experiences or share their stories in anonymity. However, due to the numerous allegations of sexual abuse that occurred in Australian Parliament recently, the movement has been reignited. One of the ways that the #MeToo movement resurfaced was through social media. Janine Hendry, an Australian academic, tweeted on February 24 and 25 about her disgust of the Parliament’s handling of Higgins’s rape allegation, and suggested that “all of us extremely disgruntled women could travel to Canberra on March 8 and form a ring linking arms and with our backs turned toward the parliament and stand in silent protest.” Supporters who could not travel to Canberra, the capital of Australia, were instructed to wear black and take part in local marches. In response to Hendry’s tweet, over 4000 people expressed their support of the proposed protest, with a Facebook group of more than 28,000 members joining the cause. Hendry’s actions also inspired the organization of over 40 other marches around major Australian cities, including Melbourne and Sydney, and these marches were endorsed by the Australian Council of Trade Unions. These marches, called the Women’s March 4 Justice, are also coupled with legislation. The Women’s March 4 Justice has prepared a petition addressed to Prime Minister Morrison, and asks for four immediate actions which are:

Although the protestors have presented the petition to Parliament, there is still work to be done regarding the equality gap in Australia. In 1984, Australia passed the Sex Discrimination Act, outlawing gender discrimination and sexual harassment. Even so, the Australian Human Rights Commission called the country’s efforts to combat sexual harassment “disappointingly slow” in a 2020 report. While Australia is a wealthy country, less Australian women have been surveyed to work full-time in comparison to Australian men, and women’s retirement savings are 21 percent less than men. Interestingly, between 2006 and 2020, Australia’s rank in the World Economic Forum’s Global Gender Index fell from 15 to 44. Emma Dawson, who is the executive director of the think tank Per Capita, believes that this drastic fall can be attributed to Australian women’s lack of economic and political participation due to misogyny in the workplace. Health and life expectancy of women are also included in the World Economic Forum’s Global Gender Index, and both have remained at poor levels due to nationwide domestic violence and early mortality in Indigenous women. Unfortunately, the COVID-19 pandemic has only led the gender gap in Australia to widen, which also likely attributed to the drastic decrease in Australia’s gender index rank.

In the Australian Parliament, gender diversity is also scant. While the upper house of the Inter-Parliamentary Union has a relatively equal gender ratio, women only make up 31 percent of the Parliament’s lower house, and six out of 22 of Prime Minister Morrison’s leadership positions. This gender discrepancy in representation has been highly criticized by the public—an Essential Poll, conducted prior to Porter’s denial of the rape allegation, found that two-thirds of surveyors indicated that the Australian Parliament prioritized protecting itself over women.

Although Australia is increasingly falling behind on gender equality, support for the #MeTooMovement is still going strong, as over 22,000 people have signed the March 4 Justice petition and activists of all ages are spreading awareness about sexual consent. Additionally, policy experts and lawyers around the world are coming together to analyze Australia’s laws and find legal loopholes to facilitate the reporting process for sexual harassment survivors and prepare Australia’s transition process into their new #MeToo Era. Hopefully, the Australian Parliament will do the bare minimum and hold themselves accountable for the destruction and trauma they have caused in the lives of many women and sexual harassment survivors, as well as the poor example they have set for children who are future legislators, as they may look up to important leaders like Morrison.