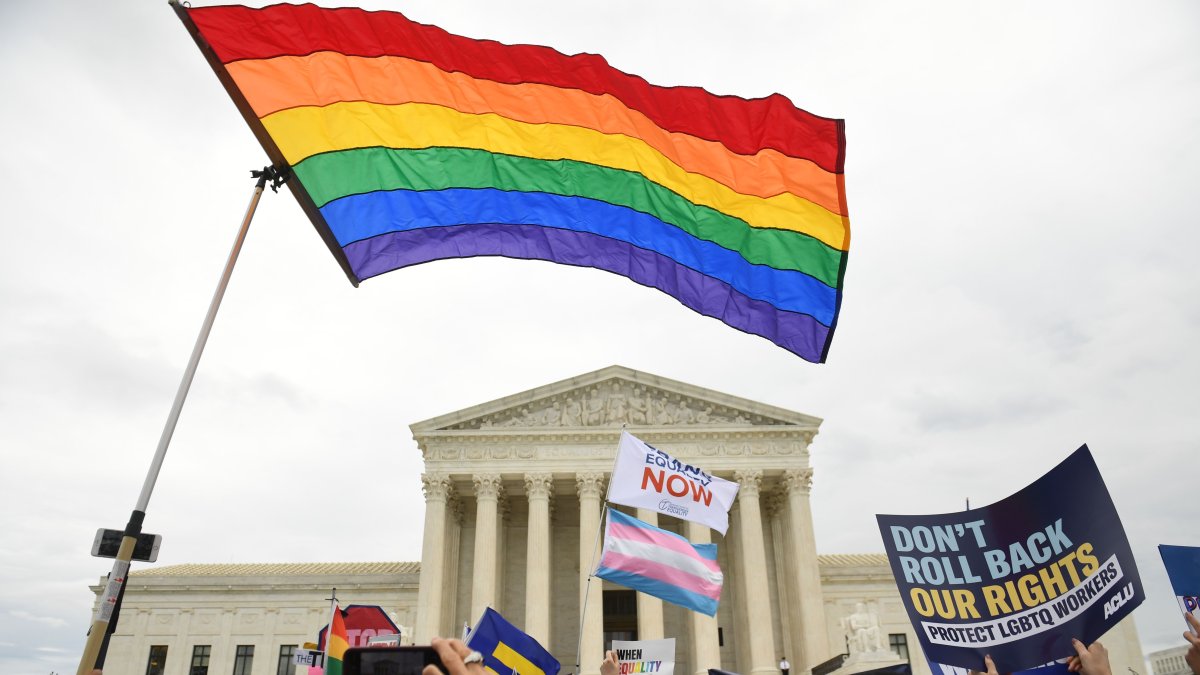 A Fight Over Foster Care, Religious Freedom, and Equality

Catholic Social Services has been providing foster care in Philadelphia for more than 200 years. Referred to as CSS, the agency claims to support “more than 3,100 people every day.” There’s just one problem: CSS refuses to include same-sex couples in the adoption process, citing its strong religious belief that marriage is between one man and one woman. In 2018, CSS’s ability to operate was challenged when, in reacting to the news of another foster care agency refusing to certify a gay couple, city officials passed a resolution condemning “discrimination that occurs under the guise of religious freedom.” CSS quickly filed a lawsuit, arguing that Philadelphia’s ordinance violates a litany of provisions in the Constitution, namely the Free Exercise Clause. Both the district and circuit courts ruled against CSS, but last year, the Supreme Court agreed to hear the agency’s appeal. With a newly cemented 6-3 conservative majority, the nation’s highest court seems primed to deliver a much different outcome in Fulton v. City of Philadelphia.

The core tension in Fulton is one that has become increasingly prominent in recent years: religious freedom vs. equality, especially in regards to LGBTQ rights. While the Court has typically avoided making sweeping rulings in the past few years, the death of Justice Ginsberg and the confirmation of Justice Barrett may lead to a major shift. Already during the COVID-19 pandemic, for example, the Court has struck down a number of shelter-in-place orders because, in the majority’s view, the laws burdened places of religious worship. Three key questions will determine whether a similar victory is likely for Catholic Social Services: 1) Is CSS a government contractor or a licensee? 2) Is the city’s law generally applicable? And 3) How much scrutiny should the Court apply to LGBTQ discrimination?

Is CSS a Government Contractor?

Perhaps the most cut-and-dry issue in this case is whether CSS is a government contractor or a licensee. The distinction between the two is fairly clear: a contractor produces goods or performs services for the government, while a licensee has simply been permitted to engage in a certain activity (think firms practicing law). In Fulton, CSS is claiming that it is a licensee because it has been providing foster care services for 200 years, before the government was involved in the process. But many justices, including strident conservatives John Roberts and Clarence Thomas, seemed skeptical of the claim. The specific issue here is “home studies,” where a foster care agency will visit parents to conduct evaluations (and where CSS will not visit any same-sex parents). However, many local governments perform home studies on their own. This clearly supports the city’s case: it is contracting out a service it could very well conduct on its own to a private entity.

Moreover, as Justice Sotomayor pointed out during oral arguments, it’s very unusual for the government to pay an agency to take a license. Usually it is quite the opposite: those trying to get a license (such as hunters and fishers) have to pay the government to obtain their permit. As for CSS, the city of Philadelphia is paying the business $26 million a year for foster care services. On this issue, then, it’s clear that CSS is a contractor.

While the case put forth by CSS is lackluster, it’s easy to see why they are nevertheless making it. In its jurisprudence, the Supreme Court typically gives the government much latitude in regulating its contractors. NASA v. Nelson (2008) is the most relevant precedent; there, the Court unanimously ruled that an expansive background check of employees working for government contractors was constitutional. Indeed, one of the lawyers for the city, Stanford Law Professor Jeffrey Fisher, asserted that the outcome of this case could be modeled on Nelson: viewing this as a simple contracting case, the Court could easily rule that the government can set reasonable, non-discrimination requirements for its contractors.

Looming over Fulton — as it does nearly every Free Exercise case — is Employment Division v. Smith, a landmark 1990 ruling. In Smith, two drug rehabilitation counselors were fired for using peyote, an illicit substance, in a Native American religious ceremony, and subsequently denied unemployment benefits. The two men sued the government, but a 6-3 majority of the Supreme Court sided against them, creating one of the most famous tests in judicial history: a “rule of general applicability” enacted by the government, Justice Antonin Scalia wrote, does not violate the Free Exercise Clause. In practice, this means that the law must be neutral and secular (it cannot target a specific religion). The question in Fulton, then, is clear: is Philadelphia’s ordinance barring CSS from foster care services a rule of general applicability? The only way to answer that question is to examine the mechanics behind foster care in the city.

The system in Philadelphia consists of two phases: an initial screening phase, (comprised of parents seeking to adopt), followed by a matching phase (in which children are assigned to homes). In the first stage, the city bans all forms of discrimination, but in the matching period, it considers race and requires that agencies dealing with disabled parents have a special certification. In addition, Section 3.21 of the contract grants power to the Commissioner of the department to grant exceptions to the non-discrimination requirement. These exemptions form the crux of CSS’s charge: because there are numerous possible exceptions, this law is not neutral, they charge.

But additional evidence muddies the waters for Catholic Social Services. Zero exemptions have been handed out by the commissioner, and in only one instance has a racial exemption been used: a case where the child used racial slurs. Moreover, all of the exemptions that exist are in the matching phase, but this case is about the screening portion: CSS refuses to even consider same-sex couples for adoption.

Looking to Smith, as counsel for the city Neal Katyal put it, the case doesn’t say that the mere existence of an exemption is unconstitutional, but rather, the application of that exemption in a discriminatory manner. And here, the exemptions have hardly been applied at all. Michigan Law Professor Leah Litman reinforces this point in a recent interview with the National Constitution Center: there were all kinds of similar exemptions and waivers in Trump v. Hawaii (the famous travel ban case), she says, but the Court still ruled in favor of the government. Because the exemptions CSS cites are in a different phase of the process altogether, and because those exemptions are used in rare circumstances, Philadelphia’s rule is absolutely generally applicable. The ordinance simply bans discrimination on the basis of sexual orientation, a neutral and secular rule.

But the most pernicious argument CSS makes is its one about the nature of LGBTQ discrimination. The agency’s lawyers contend that this case would be far different if it involved race instead of sexual orientation. Hashim Mooppan, on behalf of CSS’s position argued, “racial discrimination is particularly unique and compelling in this nation’s history.” This much is true — the history of racial discrimination in the country is comparable to none. But that should not be an excuse to enable another kind of  bigotry. Mr. Katyal puts it well in his response; Philadelphia has the an extremely compelling interest: avoiding the social stigma that discrimination necessitates.

In terms of a legal perspective, Justice Kagan posed an illuminating question: how would this case turn out if gender discrimination was the issue? The hypothetical is particularly important because of how the Supreme Court adjudicates discrimination cases. Racial discrimination is subject to strict scrutiny, the most stringent form of review; when applied, the discriminator almost never wins. Gender, however, is treated differently: it is subject to intermediate scrutiny: a more lenient form of examination. As for sexual orientation? Well, the Court has never ruled one way or the other.

Mr. Mooppan never answered Justice Kagan’s question about discrimination on the basis of sex, but the mere possibility that it may be legally tolerable is immediately repugnant. From a simple practical standpoint, government contracting is a far-reaching enterprise, and to allow thousands of companies to engage in discrimination on the basis of sex and sexual orientation would send the industry into disarray.

But on a deeper level, it’s important to ask: why even prevent this discrimination? A 1964 Senate Commerce Committee sheds a lot of light: “Discrimination is not simply dollars and cents, hamburgers and movies; it is the humiliation, frustration, and embarrassment that a person must surely feel when he is told that he is unacceptable as a member of the public because of his race or color.” The same goes for sexual orientation. It is important to maintain robust religious freedom laws. But it is flagrantly improper to wield the First Amendment as a weapon to let agencies discriminate. Catholic Social Services refuses to even consider parents on the basis of their sexual orientation. They point to the fact that no gay couple has ever tried to use their services, and that, consequently, CSS has never turned away anyone. That verbal sleight-of-hand may be clever, but its logic is dangerous. Indeed, it’s the same kind of thinking that led those in power fifty years ago to tell African-Americans to use another water fountain. Respect for religious freedom is a cornerstone of American democracy, but it is not a license to deny services to individuals on the basis of their identity. And this case is simpler than that: the city isn’t trying to abolish CSS; it is asserting that if a contractor receives money from the local government, they cannot discriminate.

How Does This End?

When the Supreme Court first agreed to hear this case, observers pondered the possibility that Fulton could be a landmark case because a majority of the Court may overturn Employment Division v. Smith, a longtime conservative dream. Based off the statements of Justices Roberts, Kavanaugh, and Barrett, that extreme outcome seems unlikely. Still, given the overwhelmingly conservative nature of the court, a ruling for CSS is almost assured, a major victory for the religious right.

In his majority opinion in Obergefell v. Hodges (2015), the landmark case legalizing same-sex marriage, Justice Kennedy wrote, “the nature of injustice is that we may not always see it in our own times.” For the same-sex parents hoping for the Court to recognize their plight, nothing could be truer.