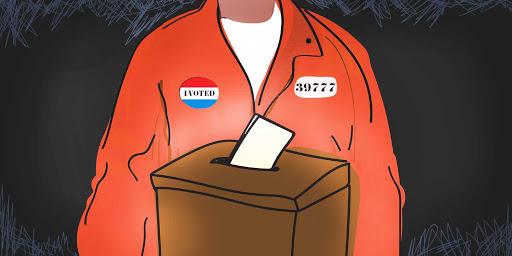 Voting Behind Bars: Why Incarceration Should Not Limit the Right to Vote

On March 2, as congressmembers considered the For the People Act, a bill that would enact the most comprehensive expansion of voting sights in the United States since the Voting Rights Act of 1965, Democratic representatives Cori Bush of Missouri and Mondaire Jones of New York introduced an unprecedented and groundbreaking amendment to the bill that would allow incarcerated people to vote from prison.

The amendment failed 93-328, with all Republicans and a significant number of Democrats, including many self-identified progressives, voting against it. Nonetheless, the fact that it was even considered and debated in the first place signifies a monumental shift in the national conversation surrounding voting rights for incarcerated people. The introduction of the amendment led people who had previously never contemplated the issue to confront an uncomfortable question: in a country supposedly based on the principles of universal suffrage and representation, why don’t we let all adult citizens — including currently and formerly incarcerated people — vote?

Today, over 5 million people in the United States — one out of every 44 adults —  are not allowed to vote because they are currently in prison or have a felony conviction. Only two states, Maine and Vermont, have no felony disenfranchisement laws and allow all adult citizens to vote. All other states have varying restrictions on the ability of people with felony convictions to vote, with the most lenient of states only banning people currently in prison from voting, and the most stringent of states banning people convicted of certain felonies from ever voting again. Felony disenfranchisement has been justified  by the Supreme Court as constitutional due to Section 2 of the Fourteenth Amendment, which allows the denial of voting rights for “participation in rebellion, or other crimes.”

Opposition to allowing people convicted of felonies to vote remains widespread, especially when it comes to allowing currently incarcerated people to vote. Many people who identify as liberal and advocate for sweeping criminal justice reform still believe that allowing incarcerated people to vote is a step too far. It is interesting to examine the seemingly paradoxical views of those who recognize that our current system of incarceration is deeply unfair, yet simultaneously support the disenfranchisement of the millions of people trapped inside that system.

Advocates of disenfranchising incarcerated people often refer to widely sensationalized and violent crimes — for instance, at a 2019 Democratic presidential primary debate, Sanders was specifically asked whether he would “support enfranchising people like the Boston Marathon bomber, a convicted terrorist and murderer?” The disproportionate focus on the “worst” crimes is nothing new; people have long used  the most extreme and severe examples of criminal behavior as a justification for policies like overpolicing and mass incarceration. But Sanders is right, even if he was widely criticized for his response — everyone should have the right to vote, even those convicted of violent offenses, and advocating for this does not equate to downplaying or minimizing their crimes.

As Supreme Court Justice Earl Warren wrote in Trop v. Dulles (1958), “Citizenship is not a right that expires upon misbehavior.” Just because someone is convicted of a crime, this does not mean that they’ve lost the ability to reason or make political decisions. In a democracy established on the principle of universal suffrage, everyone, regardless of their personal circumstances, should have a political voice — it is possible to reconcile this with the reality that some people do heinous things and face consequences for them. And, it is reprehensible that something as seemingly insignificant as public intoxication or the possession of a few ounces of marijuana can lead to someone getting their right to vote taken away for years. While the function of government and the criminal justice system is ostensibly to keep the public safe, ultimately, how exactly does preventing currently and formerly incarcerated people from voting truly make us any safer?

Some politicians cite concerns that abolishing felony disenfranchisement might significantly swing elections. But in a country of over 200 million eligible voters, all this really indicates is that there is an excessively large number of people in American prisons in the first place. Indeed, because the United States incarcerates such a massive amount of people, the political consequences of felony disenfranchisement have been significant. According to a study conducted by the American Sociological Review, the outcomes of multiple senatorial and presidential races would have been different if people convicted of felonies had been allowed to vote. It is especially ironic that felony disenfranchisement exists in a country supposedly founded on the principle of “no taxation without representation” — incarcerated people in all fifty states work and pay taxes.

In recent years, there have been numerous state-level efforts intended to expand voting rights to people convicted of felonies. Last year, Washington, D.C. abolished felony disenfranchisement, and in January of this year, lawmakers in Oregon proposed bills that would extend voting rights to incarcerated people. In the wake of the Black Lives Matter protests during the summer of 2020 that prompted a national reckoning about racial justice and the harms of the criminal legal system, several states including California, Massachusetts and Iowa took steps towards expanding voting rights for all.

Yet, these reforms also often come with caveats and conditions that diminish their intended impact. For example, in 2018, Florida voters approved an amendment that would restore the voting rights of people convicted of most felonies after their prison sentences had ended. However, these people are required to pay court fines and fees before they are allowed to vote, prohibiting many from actually voting since it is often difficult to learn how much they owe, which frequently exceeds tens of thousands of dollars. Civil rights leaders have compared this rule to a poll tax that disproportionately hinders Black Floridians from voting.

Perhaps one of the most compelling arguments for allowing incarcerated people to vote is that prisoners are currently counted as residents of the districts where they are imprisoned (instead of residents of their home communities), despite not having any political representation. This practice, known as prison gerrymandering, provides political advantages such as more congressional representation and increased funding to the districts where prisons are located. Prisons are often in rural, conservative and predominantly white areas, although most prisoners come from urban communities of color.  Prison gerrymandering bears an uncomfortable resemblance to other racist aspects of America’s history — including the three-fifths clause of the Constitution, through which Southern states sought to count slaves to increase the South’s representation and political power.

The United States is unique in the ways that it zealously prevents incarcerated people from voting. In many other democratic countries, incarcerated people do not ever lose their right to vote — for example, in Europe, twenty-six countries allow at least some people in prison to vote, with eighteen European countries allowing all people in prison to vote regardless of the offenses they committed. Canada, South Africa, and Kenya have also repeatedly affirmed the right of incarcerated people to vote. While the United States tends to portray itself in the international community as a beacon of democracy that all other countries should aspire to emulate, it could learn from the practices of other countries that allow all their voting-age citizens to vote.

In the words of lawyer and author Bryan Stevenson, “Each of us is more than the worst thing we’ve ever done.” Despite what sensationalized media stories and “tough-on-crime” rhetoric may imply about incarcerated and formerly incarcerated people, at the end of the day, they are human beings who, like many of us, are interested in political and social issues and would appreciate the opportunity to make their voice heard. If incarcerated people were allowed to vote, politicians might actually pay more attention to the appalling and cruel conditions inside prisons. Also, allowing incarcerated people to vote could help them feel more connected to their community and reinforce their sense of humanity while they’re locked in a place that constantly dehumanizes them. Ultimately, the full enfranchisement of incarcerated people, and even formerly incarcerated people, will probably not happen anytime soon. Yet the fact that it is now part of the national conversation surrounding criminal justice and voting rights, is, in itself, significant progress.

Sanjana is a junior at Berkeley majoring in Sociology and Legal Studies, and she edits for the United States section at BPR. Her interests include environmental justice, the labor movement, gender equality, and LGBTQ+ rights.