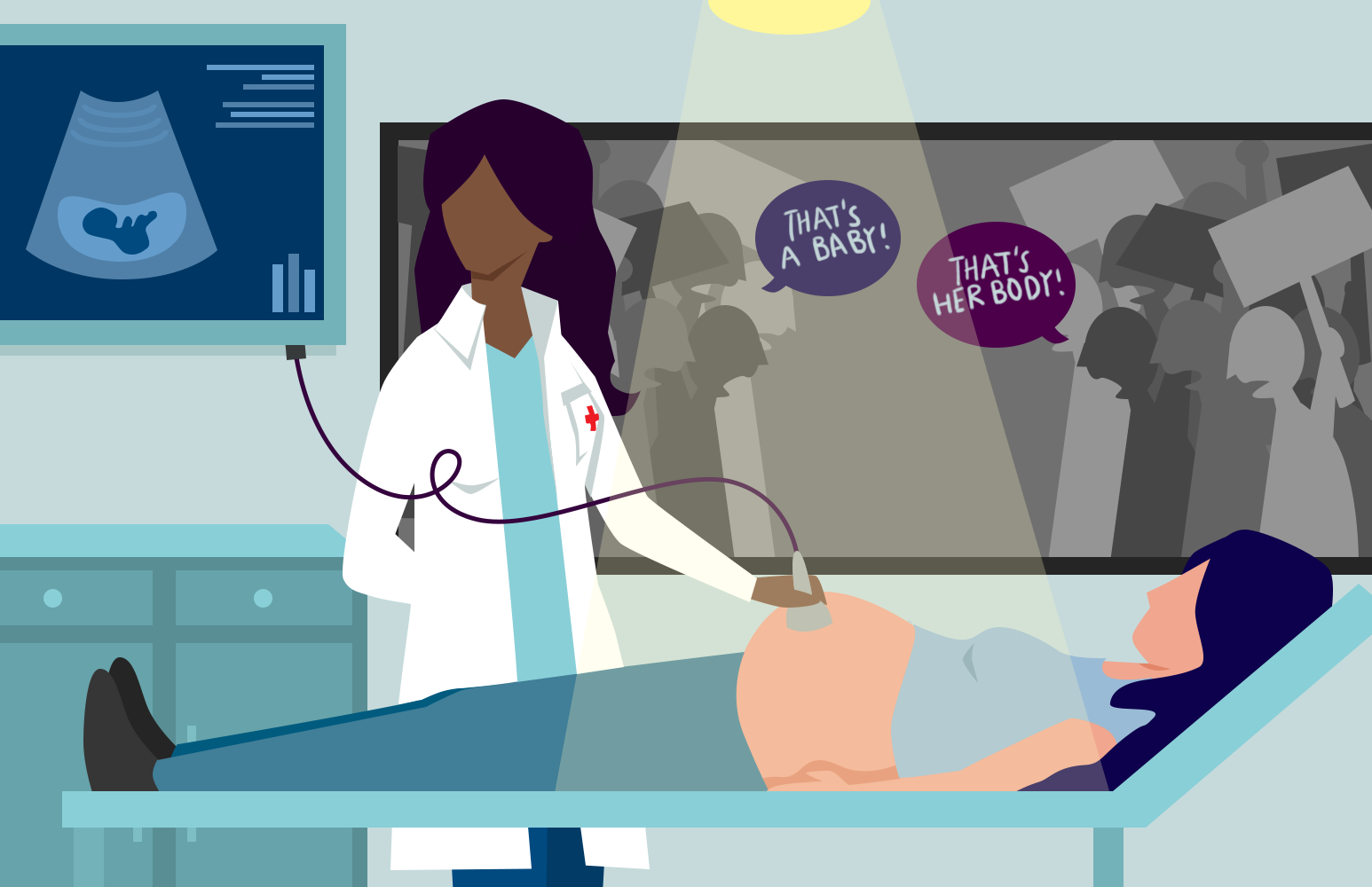 Science and Philosophy: Friend and Foe to Abortion Debate

March 2021 was an eventful month for abortion in the news. On March 3, The New York Times published an opinion article outlining the political landscape around Roe vs. Wade versus heartbeat bans, one recently passed in South Carolina. No commentary from medical experts was included. Four days later, USA Today published an article titled, “Hawaii Lawmakers Advance Bill to Allow Abortions by Nurses” which stated that the House Judiciary and Hawaiian Affair’s Committee will advance a bill that allows nurses, with the appropriate certifications and medical expertise, to perform abortions. Analysis by the medical community on the ramifications of this decision was neglected, except for one study that was in support of the bill; however, quotes from Planned Parenthood and the Hawaii Life Alliance were included.

News on abortion has been framed with the intention of gaining political traction, often in contradiction to scientific consensus on the topic. As the National Library of Medicine’s investigation of abortion in the media says, news on abortion is “often inappropriately sourced,” “politically motivated” and “misrepresented.” Moreover, the National Center for Biotechnology Information published a study that found abortion in the news is only “mentioned,” not discussed “substantively,” with only 4 percent of coverage being devoted to personal experiences with abortion. Overall, the narrative around state bans on abortion or expansion of such services is delivered so to appeal to what is newsworthy, while lacking scientific information useful to those making decisions on abortion.

This poor coverage frequently translates to poor understanding of the effects of abortion, as seen with concerns around mental health issues related to abortion and abortion-induced breast cancer.

Misconceptions of the sort are seen in the views held by Rita Rousso, retired delivery nurse and leading vigil for the Boston Campaign for 40 days for Life, a pro-choice non-profit Christian organization. Rousso believes scientific research idequately represents the toll abortion has on mental health ‒ something she’s witnessed with her own patients.

“It’s like carrying a cinder block around their neck,” she chillingly accounts to me. For cases involving rape, incest, or abuse, she tells me that abortion does nothing to help with trauma. Rousso states, “She will carry that choice with her for the rest of her life.”

Rousso holds similar frustrations with the media’s negligence of abortions increasing risks of breast cancer. She sent a number of articles to prove her point, all of them directly related to research by Ph.D. Joel Brind, a professor of biology and endocrinology at Baruch College of the City, University of New York, and co-founder of the Breast Cancer Prevention Institute. Brind, a pro-life Christian, has been the leading advocate against abortion because of the risk of breast cancer.

However, analysis of a number of studies invalidates Brind’s results, concluding instead that there is a weak correlation between abortion and breast cancer.

In fact, according to the American Cancer Society, an extensive study conducted in Denmark from 1935-1978, abortions do not have an effect on breast cancer. Studies by The American College of Obstetricians and Gynecologists (ACOG) Committee on Gynecologic confirmed in 2003 and then again in 2009 that there is no link between abortion and risk of breast cancer. In conjunction with other studies, there is little or no risk of breast cancer as a result of abortion.

Beyond these two examples, many organizations like the Christian non-profit crisis pregnancy centers (CPCs) will offer skewed guidance that is instead in line with their own views and or misrepresents facts when offering counsel and care for patients. For instance, CPCs warn their patients of serious mental health issues and increased risk of breast cancer from abortion, regardless of its aforementioned invalidity. Additionally, CPCs claim “Abortion is more dangerous than childbirth” which is scientifically unfounded. In actuality, the National Library of Medicine’s comparative study of live births and legally induced abortions found that death associated with childbirth was 14 times riskier than abortion. While there are still risks, often some understated, the degree of risk of death is very insignificant for both abortion and childbirth. Beyond misinformation, most CPCs and their staff are not licensed. Yet, with about twice as many CPCs as abortion centers, these centers hold immense influence over all the women who visit.

While scientific research can debunk myths and misinformation, can it provide everything we need to inform policymakers and people on whether abortion rights or restrictions should be made or whether to have an abortion? Or, does science require a set of convictions and beliefs to give it purpose?

To explore these questions, let us consider the discussion surrounding a fetus feeling pain. Evidence has indicated that a fetus can’t feel pain or any other sensation until about 26 weeks, yet a consensus on this matter is conflicting. A congressional bill called the “Pain-Capable Unborn Child Protection Act,” or otherwise known as Micah’s law, aimed to ban abortions after 20 weeks because of research suggesting a fetus can feel pain at 20 weeks, or even sooner, into pregnancy. But upon further review, the research on the topic offers conflicting results: one literature review found that the majority of scientists believe a fetus cannot experience pain until 31 or 32 weeks into pregnancy, well beyond the point of viability. Most of the debate revolves around whether the development of the cortex, which doesn’t develop until at least the 24th week, is necessary for the fetus to feel pain. In the face of this lack of unanimity in the scientific community, instead, philosophy must play a larger role in our evaluation of abortions.

Philosophy can help us evaluate if the “pre-conceptual fetus” feeling of pain is anything like the “self-conscious pain experienced by an adult”, or if morally fetal anesthesia should be used during abortions. Even if science changes and finds that the fetus can always experience pain, it wouldn’t necessarily grant the fetus rights to never experience this pain. Alternatively, even if science could tell us that the fetus will not experience pain until later into the pregnancy, that wouldn’t necessarily mean that the fetus shouldn’t be protected. Science can’t tell us how to grant rights, it can only provide the important information needed to make such choices.

Fetal pain is just one aspect of the pro-choice versus pro-life debate that requires science and philosophy to provide answers. The abortion debate as a whole can be boiled down to these underlying questions: At what point does the fetus become viable? What makes it human? Here, science and philosophy used to understand the foundational questions surrounding abortion rights, offer even less definitive answers.

Fetus viability is defined as the ability for the fetus to survive outside of the mother. Until that point, only women’s rights are considered. With Roe. vs Wade in 1973, the threshold for viability was 28 weeks.

Chavi Eve Karkowsky, a Yale grad, and doctor in obstetrics and gynecology discuss the evolution of science in discerning viability. She recounts the changes in fetus viability since when she finished medical school in 2003 where a fetus was deemed viable at 24 weeks. After completing her residency, it moved to 23 weeks and 4 days, and in 2019 it entered the 22-week zone.

Edward Bell, a neonatologist at the University of Iowa Children’s Hospital, started practicing medicine in the 70s, where the cutoff point was 26 weeks. By the 90s, biology made him believe the threshold would remain at 24 weeks. Yet, for every decade it has decreased by one week. In 2015, he published a study showing relatively safe outcomes for preemies born at 22 weeks.

Technological developments with the use of steroids to speed up fetal development and “surfactants” that prevent lungs from collapsing after birth have “pushed the date;” however, setting an “absolute date” is impossible.

As the “window into the womb” answers more questions about the “artificial womb,” the number of weeks continues to change, Rousso tells me.

So, with an ever-changing time window who can really tell us when life begins? How do we treat an embryo or fetus at each point?

When American adults were surveyed and asked who would best qualify to answer the question of when life begins, 81 percent said biologists based on the fact that they can use their “biological expertise.” Biologists all across the political spectrum were surveyed on this very question and 95 percent of them said that life begins at fertilization.

Even so, biologists cannot tell us which ethical and moral rights should be granted to the fetus at any point of deemed viability or whether to consider the viability, as defined by Roe vs. Wade, in making our moral judgments at all. Philosophy remains in helping form individual conceptions of life, which exist at infinite points along the pro-choice, pro-life spectrum.

Science, through technology, may be able to ameliorate pregnancy and delivery, provide us a breadth of information, and perform cutting-edge procedures, but it cannot answer the question of when human life begins. Philosophy then comes into the picture, often providing comfort, assurance, and meaning when assessing the descriptive aspects of abortion that science provides. With the available information that continues to grow and change, the most compelling conclusion can be made at the point where questions can no longer be answered by science. Then, we are left to make our own decisions based on our own moral judgments. To question one’s conception of what it means to be human may be the more fruitful approach to understanding pro-choice versus pro-life advocates.