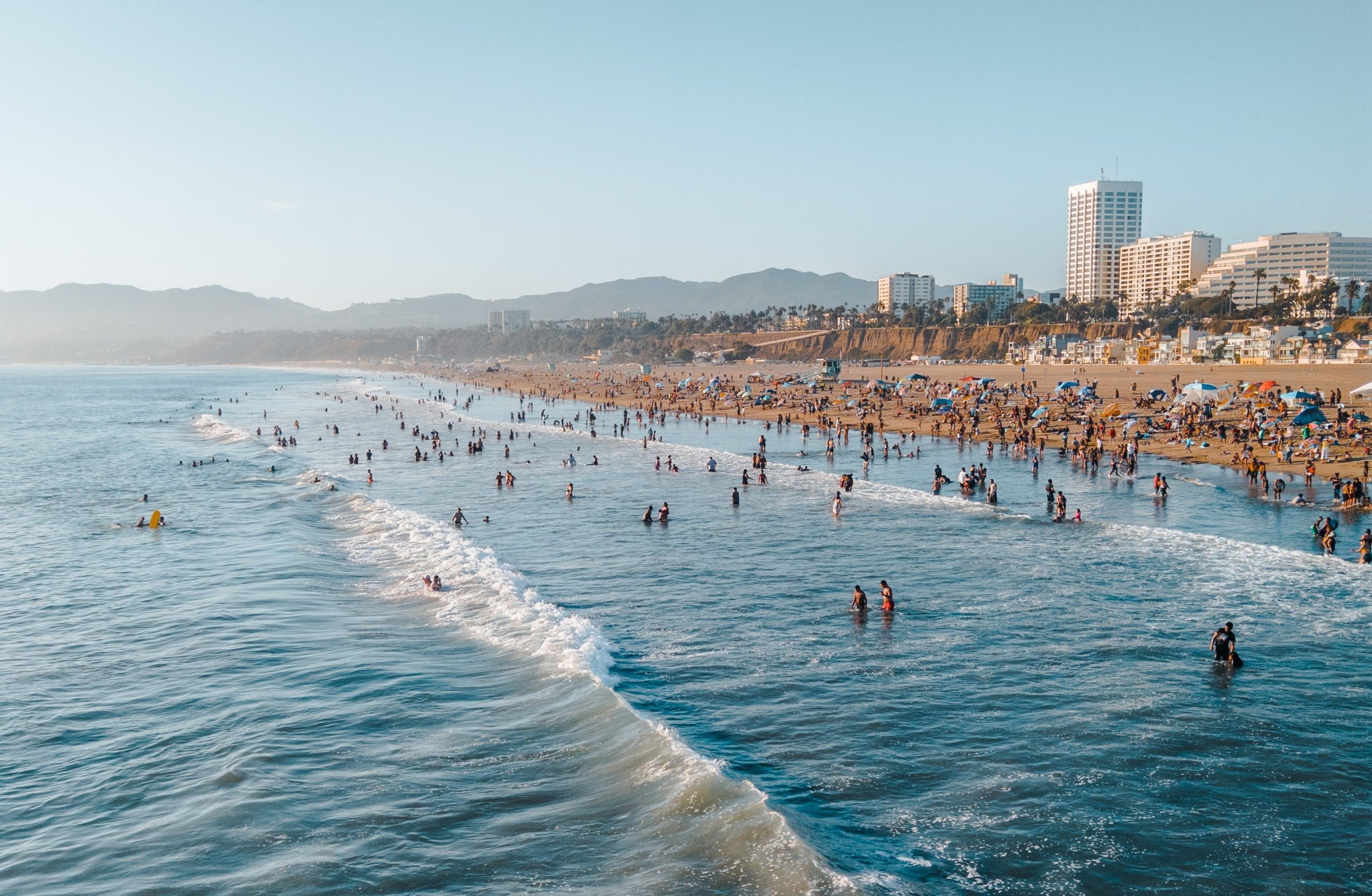 Weathering the Storm: How California Needs to Adapt to Sea Level Rise

The classic postcard image of beautiful wide, sandy beaches in California is under threat by climate change. Climate change is irrevocably changing the California coastline and will soon have a resounding impact on local economies, housing, and quality of life. Clashes between municipal governments and state governments have led to a stalemate over what beach cities should do. For beach communities, past ignorance and current stubbornness will make it difficult for them to weather the storm as well.

California is not prepared for the level of projected sea level rise in its immediate future. To understand why there has been a negligent lack of preparedness, we must first understand the climate science behind what is going on now. Much of the development in Los Angeles was carried out during the 1940s after WWII, when the Pacific Decadal Oscillation (PDO) was going through a cool period. The PDO is a long-term pattern that can last for decades of the average sea surface temperature. When the PDO is experiencing a cool period, the sea surface temperature along western North America is cooler than average.

Coastal climates are dependent on what is happening in the ocean, which makes the PDO an important phenomenon for California. The cool period of the PDO led to fewer storms on the Californian coast and there was less sea level rise due to the thermal expansion of water. The thermal expansion of water simply describes how cool water takes up less volume than warmer water. This will affect the extent of sea level rise as warming waters expand in volume. This means much of the coastal development in Southern California was built without realizing what the ocean’s full brunt could and would be in the future.

In light of this unrestrained development, some beach cities are in the path of flood destruction from sea level rise. The California Coastal Commission is developing plans for cities to implement “managed retreat.” The Coastal Commission was created in the 1970s to plan and regulate the use of land and water by the coast. This means they are the state agency that has the responsibility to decide how the development will proceed in the face of changes caused by climate change.

As beach communities have to work with the Coastal Commission, clashes occur over local and state interests. The strategy the Coastal Commission has decided to implement is managed retreat, instead of armoring the coastline with structural engineering. Managed retreat includes slowing construction in areas projected to be hazardous with impending climatic changes while armoring the coast with structural engineering includes building sea walls or jetties. The purpose of these man-made interventions is to shield a shore building a bulwark in the ocean to dissipate wave energy.

In the past, the Coastal Commission had approved seawalls for emergencies. Another problem is that seawalls are temporary fixes. In the future, a seawall may not be tall enough to continue to defend against perpetually rising sea levels or will need other expensive repairs due to increasingly powerful storms. In other words, if the ocean keeps rising, sea walls will have to be continuously rebuilt.

Structural engineering is also not cheap — for taxpayers, one mile of seawall can cost tens of millions of dollars. Not only are they expensive, but the structures will also disrupt the natural deposition of sand and are detrimental to beaches and their ecosystems. Sea walls are not sustainable choices, and we need to be looking beyond short-term fixes.

While managed retreat is a long-term, continuous process, it still can put a strain on local beach communities. For example, a managed retreat can include removing pricy beachfront homes that are hugely valuable to cities due to the property taxes they pay. This abandonment of development is usually very unpopular with citizens, which is why some cities choose to not take the necessary actions against sea level rise. In an attempt to avoid civil criticism, city managers erroneously choose to let buildings in projected-hazardous areas go on as normal.

Managed retreat is also politically risky for mayors and city councils because they have to inform homeowners that their homes are not as valuable as they think. For example, the city of Del Mar refused to adopt a recommended climate change retreat by the Coastal Commission that would have required homeowners on cliffs to stipulate in property deeds that the home is in a hazardous area or one that might become hazardous. Del Mar refused because doing so — revealing impending hazard — would kill the property value of the home, and cities cannot risk losing a huge chunk of their tax revenue by alienating these residents from beachfront properties.

Although resisting retreat sounds reasonable for cities avoiding tax revenue loss, this is a myopic decision by municipal governments. It is naive to assume that sea level rise will not be an issue in the future, and avoiding a managed retreat is dangerous to their cities. If we do not stop building now, developers will continue to construct homes that face future harm while cities have to waste money rebuilding homes that will be destroyed by sea level rise. Managed retreat is a long-term solution, and short-term harm is a necessary sacrifice. Cities that do not take the risks of sea level rise seriously will be putting their citizens at unneeded risk as well as wasting resources trying to resist the inevitable. The danger lies in underestimating the growing threat of sea level rise. An increase in sea level rise seems distant, but the impacts will be noticeable and inescapable.

Concerning research states that we could have a 9 foot increase in sea level rise by the end of the century. In addition, we will see the side effects of sea level rise such as increased violent storms that batter beach communities. There is no delaying the inevitable, and as those beachfront properties will only continue to be less valuable and more dangerous in the future, steps must be taken now to gather our losses. As the Coastal Commission puts it most succinctly, a managed retreat will, “help avoid the need to spend public funds on disaster recovery for private development.”

However, not all of the blame should be placed on homeowners who are trying to salvage the value of their homes. If the private sector does not want to spend money on rebuilding private homes that were knowingly at risk, there should be more incentive for change by the state and federal government.

To some, it seems like sea level rise is a threat far in the future and can be ignored for now. As the issue of sea level rise can be overlooked and disregarded, it is not treated as a priority, even though we are continuously seeing the effects of climate change every day.

For example, in the Northern California city of Pacifica, waves often break the seawall to spill onto the boulevard. The damages recently inflicted by the latest storm season (recall that sea level rise will lead to more violent storms) cost the city $16 million to respond out of its $36-million operating budget. There are not sufficient alternatives for homeowners relocating. For example, insurance policies, hazard grants, and federal disaster relief incentivize rebuilding more than relocating. However, as seen before, rebuilding is not a sustainable choice. For many beachfront property owners, if there’s no reward for taking preventative actions, why inconvenience themselves and hurt their property value? A solution such as building a seawall is far more attractive when considering what is actually provided to homeowners compared to what is expected of them.

Therefore, the state should step in more to incentivize people to move as the federal government is not doing enough to take or encourage people to take preventative actions. The lack of incentive is exemplified in the erasure of the threat of sea level rise in the latest FEMA risk assessment report. Sea level rise is not reported as a hazard and is implied to fall under the category of “flood hazards.” There are no California cities that are participating in the National Flood Program that are classified in the Emergency program. Instead, 64 cities are classified in “Regular Program with No Special Flood Hazard” and 36 in “Regular Program But Minimally Flood Prone.” The National Flood Insurance Program could grant from 0-45% off their insurance premiums depending on what risk a community is listed as. This further shows how the sea level rise to California cities is not taken seriously. Homeowners are not being recognized by the national government for the very real danger they live in due to climate change. Insurance is a good short-term fix, but it does not encourage people to move, nor is it applicable to many Californians. Lowering insurance prices also conceals the true risk of living in a hazard zone. The state needs to fill in the gaps to nudge homeowners towards the smartest option.

What is the smartest option? A buyout strategy right now seems unrealistic as beachfront properties are not only expensive, but many homeowners are unwilling to sell and would rather continue armoring their homes. What cities must employ is a combination of slowing building, as already planned, but cities must also redefine hazard zones. Governments have a responsibility to disclose the threat of living in a property, as people are in danger of sea level rise and the more violent storms that come with sea level rise. In addition, a managed retreat will prevent the long-term money sink of constantly using public funds to rebuild homes. No panacea exists in this situation, but inaction is the worst solution of all.

In the face of climate change, coastal cities will be forced to adapt. For the beaches of Los Angeles, sea level rise will be an expensive battle. However, it is even more expensive in the short-term by building ineffective and expensive sea walls. Cities have already employed tactics such as seawalls, but unsustainable fix after unsustainable fix will not solve anything. This is why, despite the challenges, a managed retreat will be the best answer for beach cities. It would be irresponsible for cities to allow homeowners to live in hazard areas with no reproach, and to not recognize sea level rise as an actual hazard as well. Where the federal government fails to serve California by recognizing the real threat of sea level rise, the state should step in to support homeowners. Whenever humans and the ocean face off, despite our best efforts, the ocean will always win.

Erika is a staff writer for the California section. She is a third-year at UC Berkeley studying Political Science and English. Erika aims to attend graduate school in the future.