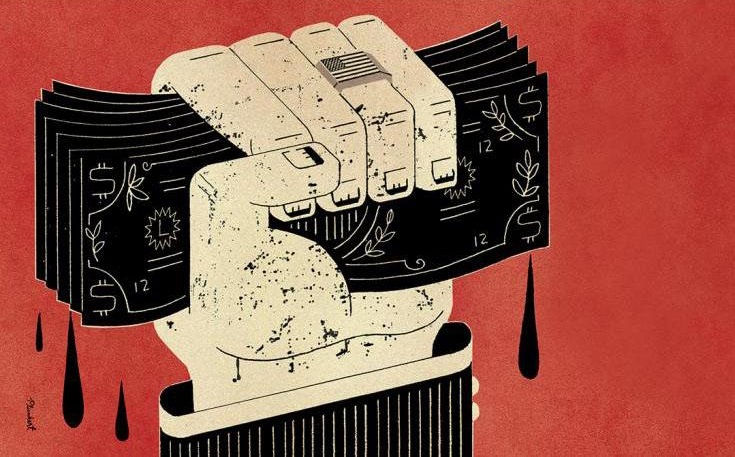 In recent years, the world has been focusing its collective policy making efforts towards combating climate change. This is largely because scientists tell us that we have until about 2030 to make enormous changes before climate change starts gravely impacting us as a species. Although the United States does not seem to be united in the fight against climate change, many have looked to California as the state that is pioneering a national climate movement. This is because California has done a lot for climate change issues, and their reputation for being a radical liberal safe haven has earned them a lot of the credit. However, this reputation that California holds may be undeserved as California has – in reality – passed little climate policy. What stands in the way for California in making any big moves in the battle against climate change is the suffocating chokehold that money seems to have on their politics.

In the most recent legislative session that ended in 2020, there were two key pieces of state legislation proposed that would tackle major environmental issues. One was AB345, written by Assemblymember Al Muratsuchi (D-Torrance), which is a bill that mandated there be a 2,500-foot buffer zone between oil and gas wells and homes, schools, and other sensitive locations. Shockingly, there are currently zero health and safety setbacks around oil and gas wells in California. In comparison, Texas requires a 250 foot setback for fracking operations. This is just one example of the enormous power that the oil and gas industry holds in California. This bill caught a lot of attention from community groups, public health advocates, and environmentalists like Greenpeace US, California Environmental Justice Alliance (CEJA), and Voices in Solidarity against Neighborhood Drilling (VISIÓN). These groups focused significant energy on getting this bill to pass, and staged demonstrations in front of the capitol building in Sacramento to encourage a yes vote on AB345. This bill also received a lot of attention because nearly 5.5 million California residents live within a mile of an oil well, unsurprisingly as the state ranks fourth in oil production in the country. Oil and gas production are major drivers of climate change, and pose great health risks for those who live close to production since these sites produce great amounts of dangerous air pollutants. Most burdened by these health risks are typically low-income communities of color. The Center for Biological Diversity claims that, “of the more than 21,000 new oil and gas wells permitted by the state, 76 percent were located in communities with above-average poverty rates for California, and 67 percent were located in communities of color.”

The other bill proposed in the 2019-2020 legislative session was AB1080/SB54. These were identical pieces of legislation proposed in the Assembly and in the Senate. These bills called for a 75% decrease in single-use plastics and mandated that products like packaging and utensils be replaced by recyclable or compostable products by 2032. AB1080 was written by Assemblymember Lorena Gonzalez (D-San Diego) and SB54 was written by Senator Ben Allen (D-Santa Monica). These bills set out to address another pressing issue in the fight against climate change: our plastic pollution problem. It is an issue that needs dire attention as, “about 11 billion metric tons of plastics will accumulate in the environment by 2025. The millions of tons that wash into the oceans every year snare and choke marine life, contaminate seafood and pollute even the depths of Monterey Bay.” California’s beautiful coasts and beaches are at risk if we do not fix our plastic problem. If adopted, the legislation would have also encouraged other states in the country to address their plastic problem since many follow California’s lead.

The Story behind the Failure

Although there is much support in California for fighting climate change, and we have a Democratic majority in the legislature, both AB345 and AB1080/SB54 failed to pass.

Why is it that two major pro-environmental bills didn’t pass in California? Although various California politicians pose as environmentalists, they are easily swayed by the power of money. Both pieces of legislation had powerful opposition that spent millions of dollars in lobbying primarily moderate Democrats in the legislature. The bill’s powerful opposition? The oil, gas, and packaging industries.

AB1080 and SB54 succumbed to the overpowering influence of the plastics and packaging industry and their multi-million dollar campaign against the two bills. The oil companies, manufacturers, and a plastic packaging-backed group argue that, “making manufacturers responsible for the ultimate fate of their products ignores the roles of local governments, waste haulers and consumers.” The plastic packaging-backed group that advocated for the failure of these bills paradoxically called themselves Californians for Recycling and the Environment. The name is extremely misleading considering it’s a group made up of packaging companies. They are led by Philip Rozenski, an executive at South Carolina-based packaging giant Novolex, and they spent almost $3.4 million lobbying in California. Out of the $3.4 million, $2.3 million was used to directly lobby in opposition to AB1080 and SB54, and $50,000 was spent on Facebook ads to campaign against these bills.

As for AB345, it not only had a well-financed opposition, but spokespeople for the opposition in the legislature. It was greatly opposed by Senator Ben Hueso (D-San Diego), Senator Andreas Borgeas (R-Fresno), and Senate majority leader Bob Hertzberg (D-Van Nuys). These three spoke out the most against AB345, and unsurprisingly, received large contributions and other support from oil interests that were also trying to lobby against AB345. There were also other senators who voted against AB345 that took recent industry-funded trips hosted by the California Foundation on the Environment and the Economy. This foundation brings together industry lobbyists from the business sector and legislators to reside in luxury hotels and attend focused seminars. Ironically, Gonzalez, who wrote the pro-environmental bill AB1080, pulled AB345 from the Assembly Appropriations Committee that she chairs. Gonzalez has received campaign contributions throughout her career from Tesoro ($13,000) ExxonMobil ($3,500) CA Independent Petroleum Association ($7,000), Chevron ($11,300), CA Building Industry Association ($10,300), and State Building and Construction Trades Council of California PAC ($34,300), according to state campaign finance data. Even Gonzalez, the writer of AB1080, seems to fall victim to the lobbying efforts of the oil and gas industry.

Even though AB345 had the support of 79 percent of Californians, and a poll done by UC Berkeley shows that 85 percent of likely voters say that climate change is their top priority, special interests outweighed the voices of constituents. In 2019, Western States Petroleum Association topped the list of spenders with $8.8 million spent on lobbying, and Chevron followed close behind with $5.9 million. The combination of both WSPA and Chevron’s money spent, and other oil companies that contributed that year, led to AB345’s demise.

The oil and gas industry in California donates millions of dollars to Democratic campaigns to support and promote their agenda. Companies that are members of the Western States Petroleum Association, such as Chevron, Valero, and Phillips 66, are the businesses that are concentrating their efforts on electoral politics. Just in the ten years from 2005 to 2014, Big Oil spent $266 million influencing California politics. Out of the $266 million, $112 million was spent on lobbying and the other $154 million was spent on political campaigns. The top contributors during those ten years were Chevron with $75,665,793, Aera Energy with $37,177,594, Occidental with $17,100,694, Valero with $6,472,155, and ConocoPhillips with $5,872,096. Big Oil is choosing to fund campaigns that are most plausible for representing their interests in California’s political sphere; the campaigns of moderate Democrats. They hope to keep this group of moderates/conservative Democrats in the legislature because they believe that these are the most viable Democrats that will kill or water down environmental legislation.

Big Oil is not new in California politics, and was extremely influential in Jerry Brown’s governorship. Most remember Governor Jerry Brown to be someone who consistently preached about fighting climate change, yet he took the most campaign contributions from the industry he preached against. According to public records provided by the Secretary of State’s Office and the California Fair Political Practices Commission, in the previous years before the bill was signed, he had received $2.49 million in financial donations from oil and gas interests.

What this says about CA’s Politics

California, compared to the rest of the country, is definitely progressive in its environmental action. We have often been looked at as the state leading the way in the country in the fight against climate change and regularly spoke out about Trump’s climate change denial driven policies and actions. California has passed landmark policies such as AB 32, that extended and strengthened the limit on greenhouse gas emissions, has organized the Global Climate Action Summit, and continues to work with other states and nations around the world to enact policy regarding climate change. However, we are still failing to fully fight climate change. As the money contributed by the oil and gas industry make evident, California is not as environmentally progressive as its reputation suggests. Key environmental bills continue to fail in the California legislature as the power of the oil and gas industry continues to dominate state politics.

In order to address the pressing issue of the climate crisis, there needs to be action taken to extract or limit money from California’s politics. As constituents, we also need to hold our representatives accountable. Ask your representative why they voted no on these bills, push them to answer the tough questions about money corrupting our politics in California. Politicians who are elected on campaign promises of environmental change must be held accountable for the promises they break. The climate change battle in California needs accountability and serious commitment if we are to make any bigger impact on the movement.

Izzy Vinyard is a staff writer for the California section. She is a senior majoring in Political Science and minoring in Global Poverty and Practice. She is passionate about grassroots activism, economic and social justice, and fighting climate change. Izzy hopes to pursue a career in government or the non-profit sector.