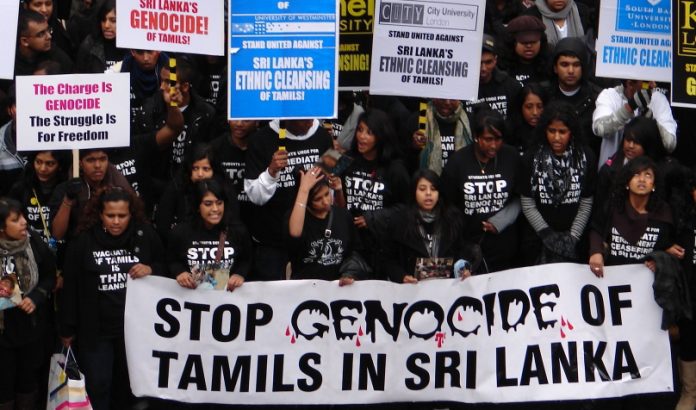 Painful Memory of Sri Lankan Civil Not Forgotten: A Reckoning At Last?

On the fateful day of the 18th of May 2009, between 40,000 Tamils lost their lives in a Civil War that had embroiled the nation of Sri Lanka since the year 1983 in a long-fought insurrection between the majority-Buddhist Singhalese country and minority Tamils. This event has come to be known as the Mullivaikal Massacre. It falls nothing short of a mass killing or genocide in today’s terms and remains highly relevant to dissecting Sri Lanka’s turbulent political landscape today.

This massacre concluded the Civil War between the Sri Lankan government and the Liberation Tigers of Tamil Eelam, better known as LTTE, a military separatist group fighting for an autonomous homeland for the minority and marginalized Hindu Tamils in the region. The massacre directly implicated the Sri Lankan government in the entrapment of 40,000 Tamils in three successive no-fire zones in LTTE-captured strongholds and safety zones. These areas were places where they could seek healthcare, shelter, food and other forms of assistance. Yet, in cessation of hostilities agreed upon by both parties, Sri Lankan forces repeatedly targeted these areas.

Today, Sri Lanka is finally facing scrutiny from the United Nations after much delay, nearly twelve years after the defeat of the Tamil Tigers and the civilian deaths that followed. The leadership of the Rajapaksha brothers remains one of the most contentious aspects of the Civil War. Colonel Gotabaya, then-Lieutenant and now-President, was single-handedly responsible for leading the Sri Lankan Army in a war against the LTEE leadership, while his brother, current Prime Minister, and former President (between the years 2005-2010) led the country during this time. The outrage caused by the massacre has steadily escalated as time passes and is reaching a definite tipping point of no return. It is also coming at a particularly trying time for the country, marred by great political strife and rising authoritarianism. The situation is unraveling into a call for immediate justice after years of delayed investigation, and most significantly, it is also mobilizing a powerful and burgeoning youth-led movement.

Yet, the question still remains on how a 12-year miscarriage of justice might finally be remedied, even after Sri Lanka’s Civil War has ended, especially given the entrenched patronage and rule of the Rajapaksha brothers in the country.

Retribution for the Sri Lankan Government?

“It really is a recognition that at the domestic level, processes have failed and there is no real hope that victims will access justice,” said human rights lawyer Yasmin Sooka who is currently involved in the civil prosecution proceedings against the current President of Sri Lanka, Gotabaya Rajapaksa, for alleged war crimes. U.N. Human Rights Chief Michele Bachlet submitted a critical assessment of the scenario to the Council. The United Nations Human Rights Council Resolution is finally looking into the atrocities committed during the Sri Lankan Civil War, where it is believed that between 80,000-100,000 lives were lost in the insurrection between Sri Lanka and the LTTE group.

After adopting the resolution, the Human Rights Council now has sweeping powers as well as a budget of $2.8 million allocated toward investigating the crimes and atrocities committed during the Sri Lankan War. Along with ramping up international monitoring and surveillance on the issue, the resolution also mandates the United Nations Human Rights office (OHCR) to gather and preserve any form of evidence for future prosecutions. It also makes recommendations to different stakeholders within the international community on steps they can take to ensure more accountability in the delivery of the process. Yet, many still claim that the resolution was brought on by western countries like Britain who want to dominate the “Global South’’ and have no sincere commitments to making a difference.

A product of long-time authoritarian rule

Even though the Rajapaksha brothers were praised for their success over the Tamil Tigers, the atrocities committed against the Tamils and the violation of fundamental rights in the North and Eastern parts of the country continue to smear the already bloodied pages of this chapter of history. What’s more, Rajapaksha has steered the Civil War narrative in Sri Lanka since his days as the Defense Secretary, making his hold on the issue even stronger. He was able to halt legal proceedings against Navy officers accused of enforced disappearances between 2008 and 2009. The complex and bloody legacy of the Sri Lankan Civil War is also resurfacing at a time when the country’s grip on democracy seems to be waning.

The U.N. resolution also comes at a particularly trying time for the country— especially given its human rights record and the fact that most attempts at transitional justice have been largely unsuccessful. The country is certainly in a rather unstable and polarizing political climate today, especially given the democratic backsliding it is facing. Military officers are not being put in charge of civilian functions. The country’s legal system hangs in balance due to decreasing judicial independence as well as impunity and lack of political accountability for crimes committed. The failure to reform is eroding any form of democratic governance in the country. The militarization of civilian functions is calling into question the character and ability of the current administration to shoulder responsibility for wrongdoings.

Other minority groups in these regions of the country also allege an infringement of rights. The harsh treatment and attacks against minority Muslim groups remain emblematic of a larger problem when it comes to the question of human rights, especially among more impoverished and marginalized communities in the country. The Rajapaksha government took on a particularly militarized approach toward the COVID-19 pandemic, targeting already marginalized groups and initiating anti-Muslim scapegoating. In a grossly intolerant and hostile anti-Muslim move, the Minister of Public Security recently proposed to abolish full-face coverings worn by Muslim women as a sign of combatting “religious extremism” in the country. Ethnic riots against Sri Lanka’s minority Muslim population escalated in 2014 as the Singhalese nationalist Buddhist Power Force Group. Most recently, they were blamed for stirring up, aggravating and inciting violence during the 2018 anti-Muslim riots in Sri Lanka.

The Mullivaikal memorial in Jaffna University, a university in Sri Lanka, was constructed as a way to commemorate the victims of the Mullivaikal massacre and the mass killings of Tamil civilians that took place in May 2009.  However, the authorities of the University of Jaffna recently ordered the bulldozing of the memorial. This led to an outpour of national outrage, especially among the youth. Many see it as a way to remove and erase the very heart of their identity and culture today as it seems to be a weapon in a broader government narrative to re-write history and forget about past atrocities and crimes. The youth in Sri Lanka have been largely shaped by their experiences during the long-fought war, with the conflict impacting their attitudes and identities. Recently, the government downgraded the status of the Tamil language in the country, removing the Tamil script from road signs, among other actions.

The Youth mobilization has changed the nature of the effort today. Tamils in the region actively call for accountability and justice for the atrocities committed during the course of the Civil War, only escalating and even uniting a new generation of mobilizers and activists across the Tamil diaspora globally. Student organizers at Jaffna University were able to connect with universities across the world and called on them to stand in solidarity with their condemnation of the destruction of the memorial. For example, the British branch of the Tamil Youth Organization, started the trending hashtag, #TamilGenocideIsFact to transcend awareness of the Civil War and massacre to their communities.

Today, one might even say that the historic clashes between the Sinhalese and the Tamils go beyond arguments of ethnic politics and fractionalization, calling into question the true impacts of British imperialism and colonial legacy on the country. According to postcolonial interpretations, the vestiges of British colonial pestilential ‘Divide and Rule’ strategy seem to have lasting effects on the region with groups scrambling to obtain land and territory they had lost. Both groups aim to occupy and restore the glory and areas they occupied prior to colonization. The British were known to favor the Tamils in the region and had a history of showing favoritism to them during the British occupation of Sri Lanka. The Civil War and its aftermath today mark a long and tough struggle with reconciliation for both parties as they continue to grapple with a long complex historical and colonial legacy.

Thus, a call for ethnic unity in the region appears to be a rather idealistic goal. It does not alleviate some of the larger structural issues in Sri Lanka’s government today in dealing with the crisis as well as the human rights track record that needs to be addressed. Institutional intervention by large international and intra-governmental organizations such as the United Nations continues to be shrouded in a great degree of skepticism and red tape. The United Nations Resolution marks a first yet unsteady step at best to addressing the negation and erasure of historic crimes by the government over the past few decades.