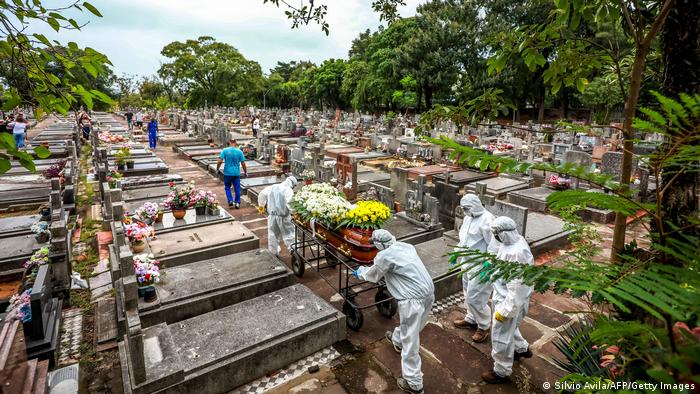 Brazil is currently the worst place on Earth for COVID-19. The nation has the highest rate of new cases compared to any other country in the world. The current death toll in Brazil is approximately 300,000 COVID deaths, a number topped only by the United States. The healthcare infrastructure has collapsed, with many ICUs reporting over 90 percent occupancy and shortages of necessary supplies. The military had to build tents outside hospitals as medical facilities were overwhelmed by the sheer number of people who fell ill.  Many doctors were forced to make life-or-death decisions for patients, which caused a parallel mental health crisis amongst medical professionals. This pandemic and subsequent decling mental health has increased rates of suicide among frontline workers. Furthermore, the vaccine rollout has been plagued by political issues and the ineptitude of the government. In the eyes of many Brazilians, the high number of deaths is entirely the president’s, Jair Bolsonaro, fault.

Jair Bolsonaro has been president of Brazil since January of 2019, making a name as a conservative firebrand, following in American president Donald Trump’s footsteps to find success as a politician. Accusations of racism, sexism and a documented disdain for environmental issues are just some of the controversies that have plagued Bolsonaro. When the pandemic hit, Bolsonaro trivialized the dangers of the virus, shunned the usage of face masks, sabotaged social distancing and urged citizens to reject lockdown measures. He refused an offer of 10 million vaccines and celebrated the setbacks in the clinical trials for CoronaVac trials. He also forced three health ministers from power, two for questioning his championing of debunked treatments, such as the using the anti-malaria drug hydroxychloroquine as a remedy for COVID-19. He has publicly lambasted governors and mayors who have implemented lockdown measures, saying to maskless crowds that “[some] little tyrants, or tyrants, hinder the freedom of many of you.”  In response, many members of the financial and upper classes have published an open letter criticizing Bolsonaro’s handling of the pandemic. In one excerpt from the letter, the signatories wrote that the Brazilian government demonstrates “a disdain for science, looks to remedies without evidence of their effectiveness, encourages crowds, and flirts with the anti-vax movement.” Another source of pressure to Bolsonaro’s political response came from former President Luiz Inácio Lula da Silva, more commonly known as “Lula.”According to NPR, “a judge annulled da Silva’s corruption convictions, allowing him — at least for now — to run in next year’s elections.” The charismatic 75-year-old leftist announced his intention to face off against Bolsonaro in the next election and berated Bolsonaro for his “ignorant” pandemic response, and getting vaccinated on TV.” The political pressure from a significant voting bloc coupled with a viable opposition candidate has led Bolsonaro to shift his stance on vaccination, stating he would indeed get the vaccine and would procure millions of vaccines for citizens.

For the 84 percent of the population who is anxiously awaiting their vaccine, this shift in message is necessary but late. Despite a preexisting strong healthcare service known as the SUS, which had previously been applauded for the capability to deliver a million vaccines a day to citizens for other diseases, the SUS has been unable to deliver COVID-19 vaccines to people because of government inaction. The government failed to purchase enough vaccines and leveraged conspiracy theories over scientific evidence, undermining the public’s faith in the healthcare industry. According to a story covered on NBC, “Linda, 75, was scheduled to get her first vaccine dosage in the first days of March, after traveling for three hours from a small town and managing to stay at a friend’s house to be there on time. But the city changed its calendar and canceled the appointment amid an ongoing shortage of vaccines and distribution problems. ‘I took a bus trip that was dangerous, and in the end I had to return,’ Linda told NBC News. She had to repeat the costly and difficult trip once her vaccination date was rescheduled.” Her story is by no means unusual. According to the Brazilian medical research institution Fiocruz, Brazil’s public health systems are “living through the worst collapse in history.”

Furthermore, despite the fact that the Brazilian government has authorized the usage of AstraZeneca, CoronaVac and Pfizer, less than 7 percent of the population has received the vaccine. For many healthcare workers, the fact that so few Brazilians have been vaccinated at a time when four variants are present in Brazil poses a major danger, not just to Brazilians, but to the global effort to beat back the pandemic. The director-general of the WHO, Tedros Adhanom Ghebreyesus, has stated that “The situation is very, very concerning….Brazil has to take it seriously.” However, many in Brazil are pessimistic about the future, as cries for a lockdown in February went unanswered in favor of preserving the economy. For many, the only way change will occur is through a change in leadership or international intervention to stop the rising death toll. Calls for impeachment are resounding throughout Brazil, with many citizens fixing black clothes in their windows to mourn those who lost their lives to COVID and demand impeachment. Billboards lining the streets of Rio de Janeiro read “Bolsonaro your government is genocidal” in Portuguese. The international response has consistently been that Brazil must implement a strict federal lockdown and purchase a greater supply of vaccines. Otherwise, Brazil will surpass 500,000 deaths by July, a number which is likely to increase from there.

It is no surprise given the incompetence of Brazilian leaders that the nation is the current epicenter of the pandemic. Leaders have treated the pandemic as something to be used for political capital. Rather than implement basic safety measures, such as masks, social distancing, and lockdown measures, Brazilian politicians have scorned and undermined these measures as a way to rile their supporters. If there is not a drastic change in policy and the infrastructure surrounding vaccine distribution is not improved, there is no end in sight for the pandemic in Brazil, and the people who suffer most are the most vulnerable members of society. Furthermore, all international efforts to help Brazil reduce the number of infected individuals should focus on aiding vaccine distribution and encouraging Brazilian politicians to implement basic safety efforts. With enough pressure and resources, perhaps there is light at the end of the tunnel for the Brazilian people.